After almost two years of negotiations, Georgia and Russia are coming to a mutual agreement on an economic project that is a sensitive political subject: the transit of goods from Russia to Georgia and further on into Armenia through the zones of Abkhazia and South Ossetia.

During negotiations that will take place in Prague on 24 May with the Deputy of Minister of Foreign Affairs of Russia Grigori Karasin, Georgia and Russia will form a special working group to fulfill the agreement on “The mechanism of trade administration and monitoring of commercial trade’.

This agreement envisions the creation of so-called ‘trade-corridors’ from Russia into Georgia and Armenia through Abkhazia and South Ossetia, RFE/RL cited the special representative of the PM of Georgia on issues with Russia Zurab Abashidze as saying.

On Sunday, Abashidze told RFE/RL that the probability of achieving a decisive agreement about the trade corridors appeared after Russia recently signed an agreement with Swiss company SGS – a special trade monitoring contract that will be fulfilled by Swiss observers.

“Georgia has signed a similar contract with the same company back in December”, Abashidze told Ekho Kavkaza [the project of the RFE/RL]. Moreover, Abashdize reported that according to the main agreement between Russia and Georgia ‘on the main principles of the trade administration mechanism and monitoring’ of 2011, Swiss observers will monitor the situation both in Russia and in Georgia but they will not carry out procedures to register goods  – they will simply collect information about the movement of goods.

Earlier, the authorities of South Ossetia expressed doubts about the perspective of a Russian-Georgian agreement about the use of the territory of the partially-recognised republic for the transit of goods into Armenia and Georgia without the direct involvement of Tskhinvali.

Abashidze excluded the participation of Tskhinvali having told RFE/RL that Georgia does not recognise the independence of Abkhazia or South Ossetia, and that the only ‘third party’ could be Switzerland.

The creation of alternative transit corridors for goods from Russia through Georgia and back has again become the topic of political discussions between the two countries. Considering the countries have not had diplomatic relations for almost ten years, the discussions are attracting special attention.

JAMnews offers an in-depth look into the project and answers the main questions:

• How did the idea of the project come about?

• What is the essence of the project?

• How will the project be carried out, and when (if at all) will it be completed?

Prologue: how did the idea for the project come about in the first place?

In order to explain the essence of the project, we need to go back seven years into the past.

Georgia took advantage of the situation to achieve one of its aims: the control over shipments that come from the Russian Federation into Abkhazian and South Ossetian regions, which Tbilisi believes are illegally occupied by Russia.

As a condition for Russia’s acceptance into the WTO, Tbilisi demanded that Moscow agrees to allow a third country to be included in the monitoring of these shipments.

After lengthy negotiations that were overseen by Switzerland, the Russian and Georgian governments signed a bilateral ‘Agreement on the Basic Principles of the Mechanism of Customs Administration and Trade Monitoring’ on 9 November 2011.

The document spoke only of Russia and Georgia; neither Abkhazia nor South Ossetia was mentioned. Many experts say this was a demand made by the Russian party, but the subject of the agreement was international control over shipments that came from Russia into these republics.

The sides agreed that the neutral, third-party country responsible for overseeing the agreement would be Switzerland. A private Swiss company was chosen to monitor trade and shipments. This company was SGS Switzerland SA.

Several years later, Tbilisi and Moscow still continued to discuss the details of the agreement, but the next decisive step was only made in 2017.

On 19 December Georgia’s Revenue Service officially signed a contract with SGS. Once this contract has been signed by Moscow, its practical realization as an agreement will begin. This was the issue being discussed – without concrete results – at the meeting between Karasin and Abashidze in Prague on 31 January.

What is the essence of the project?

It is impossible to go over the contract which Georgia signed on 19 December 2017 with SGS in full detail because it still hasn’t been published. Some experts even call it ‘secret’. For that reason, we will explain only what we can thanks to comments made by experts on the topic, though without access to the original document.

he contract with SGS has slightly modified the original aim of the agreement which was fixed in 2011, in which only the trade monitoring of shipments from Russia to Georgia and back were discussed.

The current contract stipulates conditions not only over the control of these shipments, but also about the creation of three transit corridors from Russia to Georgia for the movement of goods.

According to the contract, only one of these roads will be open at all times in order to facilitate the movement of goods and people. This is the only road which currently runs from North Ossetia through the Upper Lars customs point at the Georgian-Russian border. 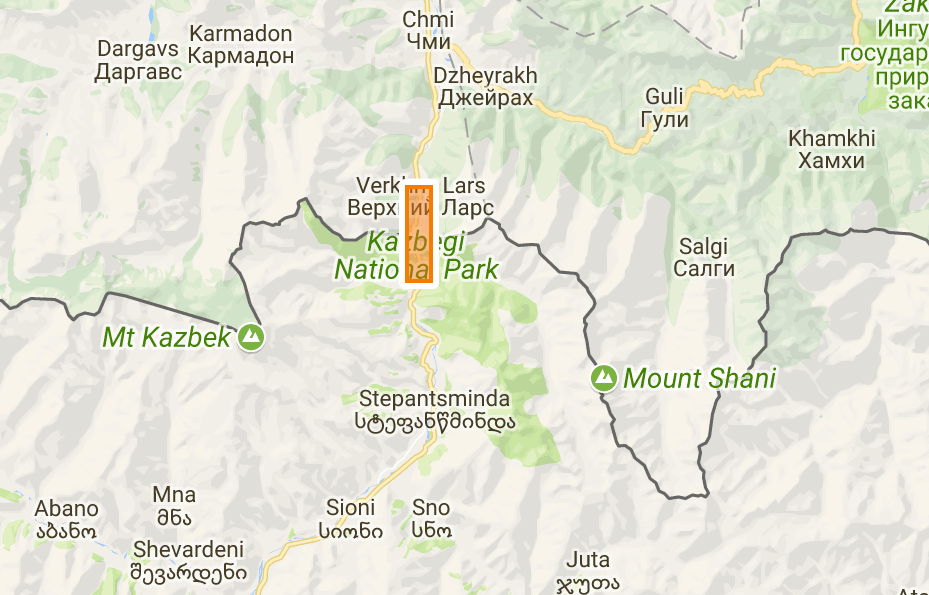 This corridor has two main problems.

One is that it has a low capacity due to the fact the road is very narrow – cars have to wait in line for a day, sometimes more, especially during tourist season (winter and summer).

The second problem is that there are frequent snowstorms, floods and other seasonal impediments which cause the road to be closed for days at a time – sometimes even weeks.

he other two roads which are mentioned in the contract are:

1) The highway from Vladikavkaz via South Ossetia to the Gori region of Georgia;

2) The highway from Sochi via Abkhazia to the Zugdidi region of Georgia.

Both roads go through conflict zones and for that reason they have been either partially or completely closed since the beginning of the 1990s. According to the current contract, they could be used only as alternative roads in the case of emergency situations (however, the nature of these ‘emergency situations’ is not made clear by the document).

Political analyst and professor at the Grigol Robakidze University, Paata Zakareshvili, told JAMnews that: “The contract with SGS is different from the contract of 2011 in that Georgia agrees to potentially open transport via roads through Abkhazia and South Ossetia. This was definitely not Georgia’s main aim, and it has probably been lobbying against the idea. The project has become increasingly more important, but even if it proceeds, the question remains: Will the alternative transport roads actually open in emergency situations or will this part of the agreement remain solely on paper?”

Next: How will goods be transported along these two roads in the aforementioned emergency situations?

A practical outline of the routes

SGS will reserve the right to be responsible for checking any shipments that will pass through any three of the routes mentioned above. SGS will be accountable only to the Swiss government.

The Russian and Georgian sides will be obliged to present SGS with extensive information on incoming cargo.

SGS will have to create its own checkpoints (customs) at specially agreed upon geographical locations. According to the agreement from 2011, these points must be located at both ends of all three trade corridors – but not on the territory of South Ossetia or Abkhazia.

The geographical location of SGS’s checkpoints 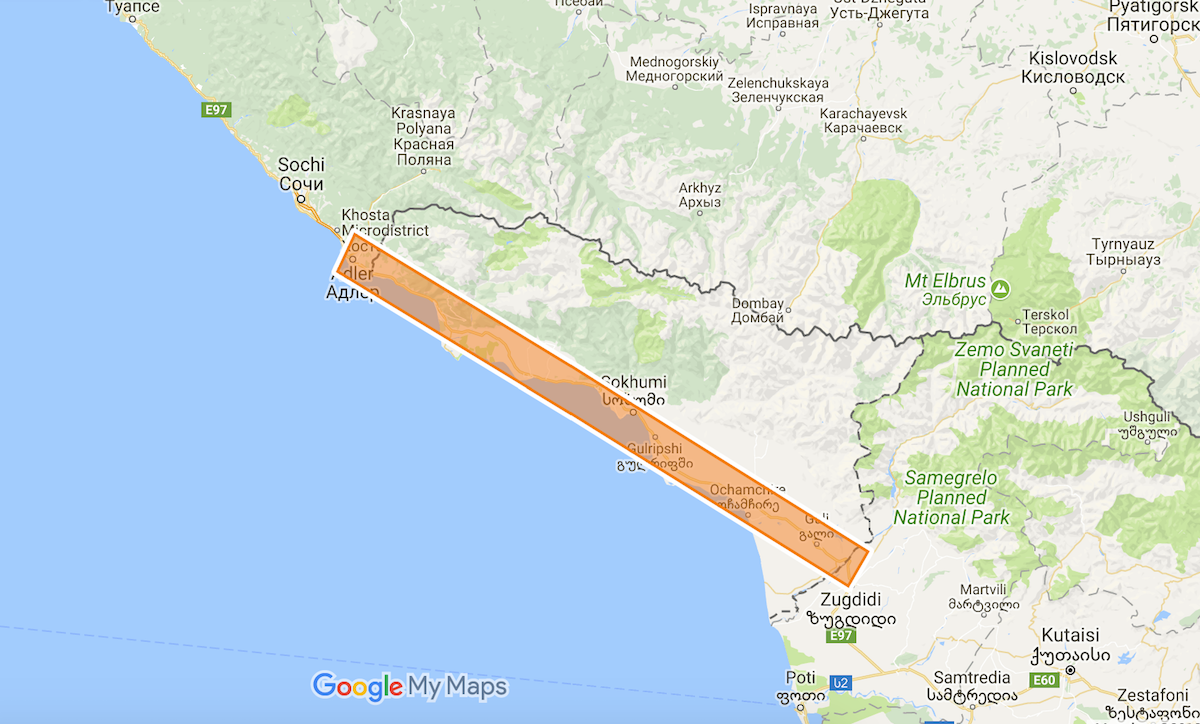 One customs point will be created near the city of Adler (Krasnodar region, Russian Federation) and the second in the city of Zugdidi, Georgia.

The transit route from Vladikavkaz via South Ossetia to the Gori region of Georgia. 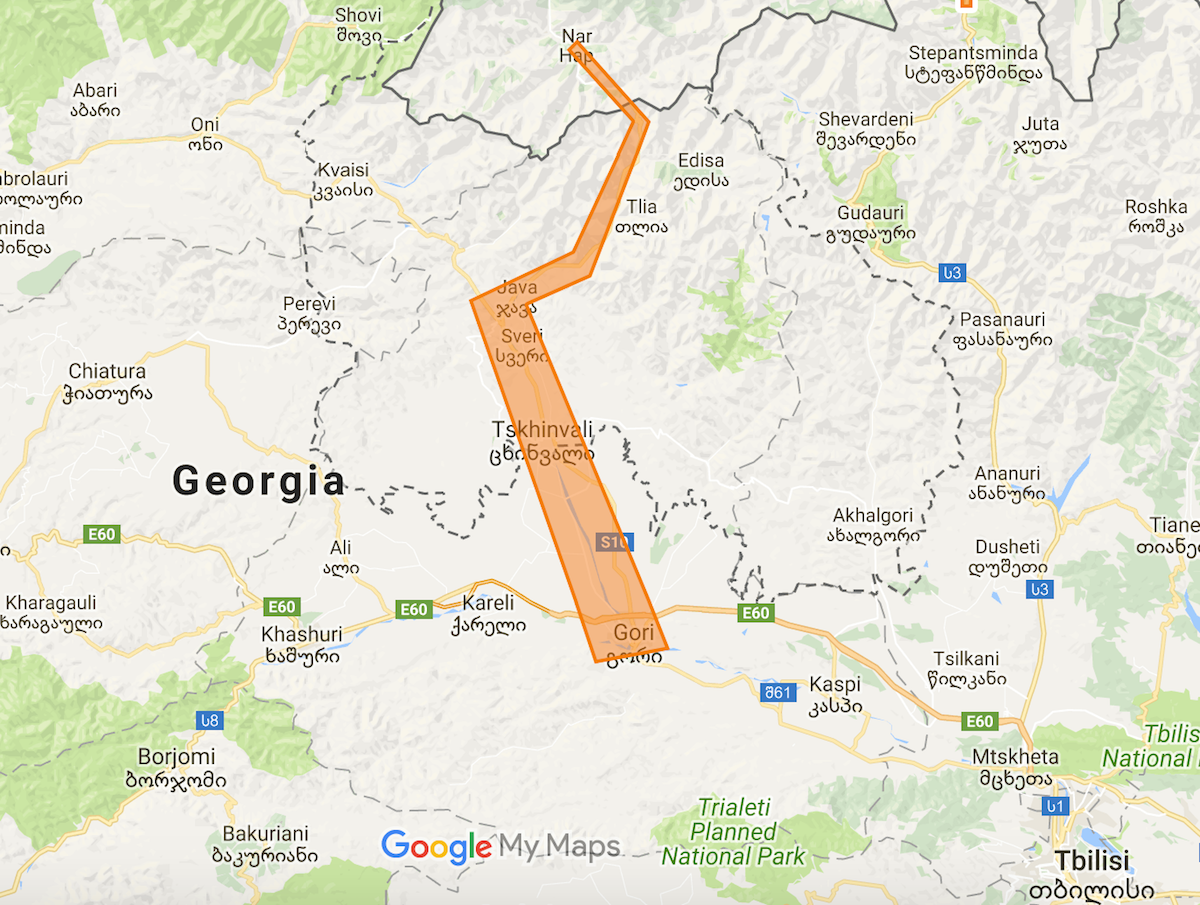 One customs point will be created near Nart village in North Ossetia, Russia, and the second in the district of Gori in Georgia.

The currently functioning road from Vladikavkaz, Russia, through the control point at Upper Lars – Kazbegi (Georgia) was included in the agreement per request of the Georgian side which wanted all three transit roads between Georgia and Russia to be regulated in a similar fashion. There will also be two checkpoints set up by the Swiss company in this location – one near Vladikavkaz and the other in Kazbegi, Georgia.

What does Georgia expect from the project?

Sergi Kapanadze, who is currently an MP from the European Georgia party, and who in 2011 lead the Georgian delegation at the 2011 negotiations told JAMnews that this ‘is indeed a very good and necessary agreement’.

“Georgia has finally achieved international observers on the borders of the occupied regions.

“Georgia has also got hold of a mechanism that will act on an international level, which will allow for commercial operations to be conducted through the occupied territories.

“But it’s important to highlight that here we are talking about possibilities: the mechanism itself will not give birth to commerce and does not obligate any of the parties to act in this direction.”

What does Russia expect from the project?

“We have great hopes for this agreement: we hope it will give a powerful boost to commerce in the region,” said the Russian Deputy Minister of Foreign Affairs, Grigori Karasin.

However, Karasin did not completely describe the function of the Swiss customs points. His words made it seem as if they will be located only on the territory of Georgia which does not adhere to the text of the agreement.

Although the alternative transit points that are discussed in the agreement go through Abkhazia and South Ossetia, Karasin told the Russian Kommersant newspaper that the document ‘does not entail obligations for third-party countries, including, of course, the Republic of Abkhazia and the Republic of South Ossetia’. But he did not explain what exactly this means for these republics.

What does Armenia expect from the project?

“Do I understand correctly that the main beneficiary of the realization of this agreement will be Armenia and that Moscow is not doing this so much for itself but more at the request of Yerevan?” Kommersant asked Karasin.

“We have definitely received a request from Armenia,” he answered.

Why is it so important for Armenia that the political, bilateral Georgian-Russian project come about? Armenian analyst Naira Hayrumyan from the Armenian Lragir publication explained:

“Armenia has only one dry-land route that connects it with Russia through Georgia. It was restored after the Russian-Georgian war of 2008 per Armenia’s request. However, this road is closed for about half the year due to severe weather conditions. Armenia is not hiding the fact that it needs a safer and more reliable transport route to Russia through Georgia.”

Toponyms and terminology used in the publications, and views, opinions and strategies they contain do not necessarily reflect the views and opinions of JAMnews or any employees thereof. JAMnews reserves the right to delete comments it considers to be offensive, inflammatory, threatening, or otherwise unacceptable

The Georgian Military Highway or 'bottleneck' of the Caucasus?

Wreckage of Iskander missile fired at Shusha on display in Baku. Photos