Even more of Russia in Armenia: the Putin Doctrine in action

JAMnews presents a reprint of an article from Analitikon journal

On 5 October 2017, the National Assembly of Armenia overwhelmingly ratified an agreement with Russia to create an ‘Armenian-Russian joint military force’.

This overwhelming ‘yes’ vote from both pro-government and opposition MPs took place against the background of an absence of intelligible and articulate responses to questions that have already become rhetorical.

However, these questions were far from being rhetorical originally. Moreover, there are answers to them that, with time, are becoming more and more painful for the Armenian government.

This agreement, which is without precedent in both its content and its possible consequences, marks a new stage in the process of surrendering practically all the levers of governance of Armenia.

In the authorities’ attempts to justify this agreement, we heard the worrisome fact that during the period of rule of the first president Levon Ter-Petrosyan, a similar agreement was signed under the stamp of ‘top secret’ and the agreement simply ‘fills in the gaps’ of the implementation of this agreement. In other words, the process of surrender began two decades ago.

In the document, under the first point in the section ‘Regulations’, it says that the united military force is being created with the aim of ‘providing for military security in the region’.

At different times, the Armenian authorities have made various decisions to enter into the Collective Security Treaty Organization (CSTO), have allowed for Russia to set up military bases in Armenia and gave Russian border guards control over the border areas with Turkey and even Iran.

However, as it turns out, from Armenia’s point of view, military security is in a sorry state and the threat of an outbreak in the war with Azerbaijan is constantly growing. And so they tell Armenia that what they have is not currently enough, and that there is a need to create a joint military force.

In order to avoid historical excursions, one can look back to 2014 to just how Russia observes and respects the agreements it signs and how it arbitrarily interprets them – all the while accusing her opponents of violating them, as happened in the Budapest memorandum of 1994, which guaranteed the inviolability of the borders of Ukraine and its security.

As concerns Armenia, against the backdrop of the surrendering of all strategic industries to Russia and signing one-sided agreements providing for exclusive and monopolistic rights of Russian state energy and transport corporations (Gazprom, Rosneft, RZD), the creation of the joint armed force or the ‘filling in of gaps’ in an already-existing-on-paper formation points to the fact that the process of losing sovereignty in Armenia has accelerated.

Such joint armed forces were not even created by the USSR in satellite countries, as they were before the ignominious collapse of the member states of the Warsaw Treaty Organization.

Yes, there were bases, military contingents and interventions under code names such as ‘international duty’, but ‘joint armed forces’ did not exist.

Article 7 of the CSTO codex reads:

“Member States decide on the deployment on their territories of groupings of troops (forces), military infrastructure facilities of states that are not members of the Organization, following urgent consultations (agreements) with other Member States.”

That is, Russia has no more obligations, but it has rights, which seem to increase all the time.

There are all the signs that Russia has successfully employed a modernized version of the ‘Brezhnev doctrine’ in relation to Armenia to limit its sovereignty, and in even harsher conditions than existed during the Brezhnev years.

This can be called the ‘Putin Doctrine’ which was launched in 2012 with the beginning of his third term as president along with the Ministry of Foreign Affairs of the Russian Federation – a new Conception of foreign policy, under which ‘integration processes on the post-Soviet space’ were listed as a priority. After Yerevan’s voluntary (but forced) rejection of the EU association agreement in September of 2013, the process of Armenia’s loss of sovereignty began to acquire a landslide character.

The degree of control that Russia holds over the political-economic system has grown to such an extent that with the recent addition of the joint military formation, one can say without exaggeration that the country has been, in fact, occupied, retaining a merely nominal degree of independence which is perhaps even less than those of the satellite-countries of the USSR.

It is worth stressing that not one country of the CSTO or the Eurasian Economic Union has even a degree of judicial dependence upon the will of the Kremlin.

But in these relationships we can see that there is an unnatural asymmetry but also a ‘united’ irresponsibility, from the Russian side in its attitude towards regional security and from the Armenian side, in regards to its future.

In the agreement on the creation of the joint military force, powers are provided for the command of the Armed Forces of the Russian Federation, in particular, in its Southern okrug (district).

The Southern district of the Russian Armed Forces is a rather interesting association. It has its center in Roston-on-Don and includes not only the entire Russian military contingent stationed in Armenia but also in occupied Abkhazia, South Ossetia, annexed Crimea, in areas adjacent to the internationally-recognized borders of Ukraine, in the east of which Russian troops, under the flag of the ‘DNP-LNR’, have committed acts of aggression and concentrated an impressive amounts of forces and assets.

This district unites all conflict zones in the post-Soviet space with the exception of Transnistria, and also republics of the North Caucasus that are difficult to manage from an ‘imperial point of view’.

It is important to understand under just what structure will the military forces be united with those of Russia. This is a structure that is in ‘direct contact’ with conflicts whose resolution would not be beneficial to Russia, since they allow Russia to maintain a presence in the region, which, according to NATO Secretary General Anders Fogh Rasmussen (incidentally, voiced by him during his visit to Armenia in 2012), is the most fragmented on the globe because of these conflicts.

This district is the main factor through which the situations in Donbass and Nagorno-Karabakh correlate as communicating vessels.

“If we want peace in the Caucasus, we need to integrate the entire Caucasus into the Eurasian Economic Union,” says the advisor to Putin on regional economic integration issues, Sergey Glazyev.

The absurdity of his comment is that in Russia – which is the only beneficiary of this fragmented state – he is an advisor on questions of ‘regional integration’ who speaks about ‘peace in the Caucasus’ and yet he himself is one of the main instigators of the war against Ukraine.

According to the definition of Igor Eidman and David Shahnazaryan, the first world hybrid war is currently under way. And it’s obvious that the region of the South Caucasus is its first important front, where Armenia has been subjected to the harshest and most cynical attacks from its ‘strategic ally’.

Unfortunately, the results for Armenia are currently disconcerting: Armenia is losing its sovereignty in a system of international relations and levers through which it could have straightened out its own difficult situation.

There is a lot of Russia in Armenia. Too much. 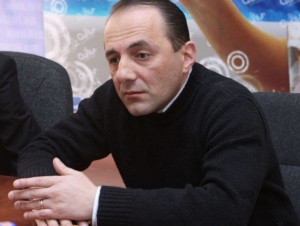 Toponyms and terminology used in the article, as well as views, opinions and strategies they contain do not necessarily reflect the views and opinions of JAMnews or any employees thereof. JAMnews reserves the right to delete comments it considers to be offensive, inflammatory, threatening, or otherwise unacceptable.