The Azerbaijani govenrment must pay journalist Khadija Ismailova 20,000 euros in compensation for having served a prison term on false charges. This decision was made by the European Court of Human Rights (ECHR).

Khadija Ismailova is an Azerbaijani journalist, author of high-profile investigations and critical articles addressed to the country’s authorities. In 2015, she was sentenced to seven and a half years in prison on charges of tax evasion, embezzlement, illegal business and abuse of power.  In 2016, the prison term was replaced by conditional punishment. Amnesty International recognized the journalist as a prisoner of conscience.

Considering the lawsuit of Khadija Ismailova against Azerbaijan, the ECHR concluded that, by putting the journalist in jail, the authorities wanted to “silence her and punish her for her work as a journalist.”

“Khadija Ismailova’s case was the embodiment of how critical voices are being persecuted in Azerbaijan,” Denis Krivosheev, representative of Amnesty International, said about the issue.

Khalid Agaliyev, an Azerbaijani expert and representative of the Media Law Institute, considers it especially important that the ECHR found a violation of Article 18 of the European Convention on the Limits of Restriction of Rights.

“This article confirms the presence of political motives for the persecution of the applicant. It’s about punishing her precisely for her anti-corruption investigations,” said Agaliyev.

This is not the first of Khadija’s lawsuits against Azerbaijan which have been satisfied by the ECHR.  True, the Azerbaijani authorities have never yet complied with the requirements of the European Court.

Khadija Ismailova still has a criminal record, and she cannot leave the country, although international human rights organizations insist that this ban be lifted from her. 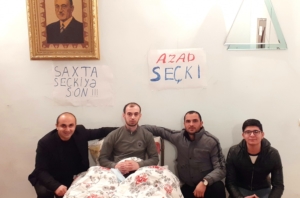