The LGBT community of Georgia decided not to hold a public event on May 17, the International Day Against Homophobia and Transphobia.

Instead, a march and a concert were organized by the Georgian Orthodox Church dedicated to the celebration of the ‘Day of Family Purity.’

Ultra-right activists joined in the march as well. 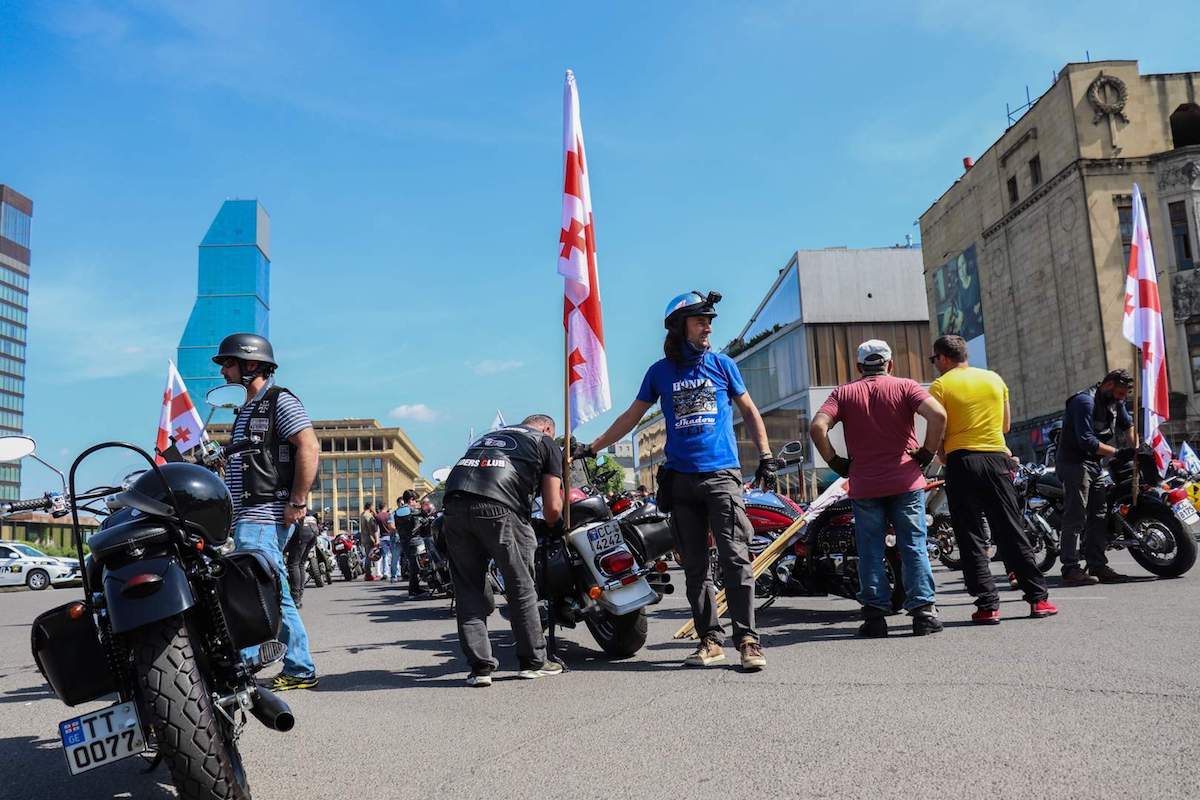 Why no pro-LGBT demonstration was held

Tbilisi Pride representative Mariam Kvaratskhelia said that in recent years, LGBT demonstrations have been met and followed by acts of violence. Since 2014, when the Georgian Patriarchate declared May 17 the Day of Family Purity, it has become very difficult to hold public events.

Kvaratskhelia says that on this day, all the central avenues of the city are occupied, and LGBT organizations are forced to avoid public events due to security risks.

• Living surrounded by hate. LGBT individuals and their parents in Georgia

“The situation after the events of 2012–2013, when it became impossible for the LGBT community to use public spaces, testifies to the systemic oppression that these people are experiencing today. In fact, this is the only group that is so marginalized that it cannot appear on the street, it does not have such a right”, said Kvaratskhelia.

Nevertheless, LGBT activists are planning to organize a march in June of this year – a “march of dignity”. It will be part of the Tbilisi Pride event, which is scheduled for June 18-23. 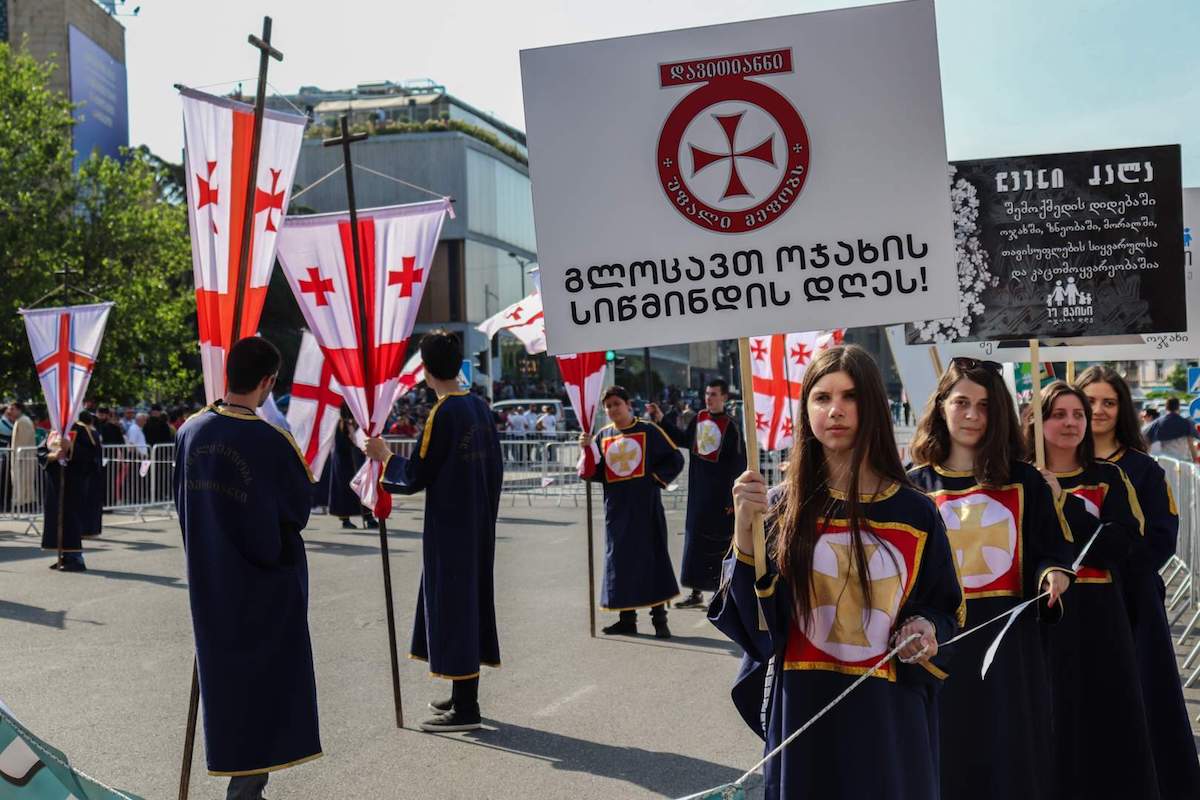 Priests and citizens gathered at Rose Revolution Square (recently renamed to Republic Square) and began a procession to the Cathedral of the Holy Trinity. A motorcycle rally accompanied the march. 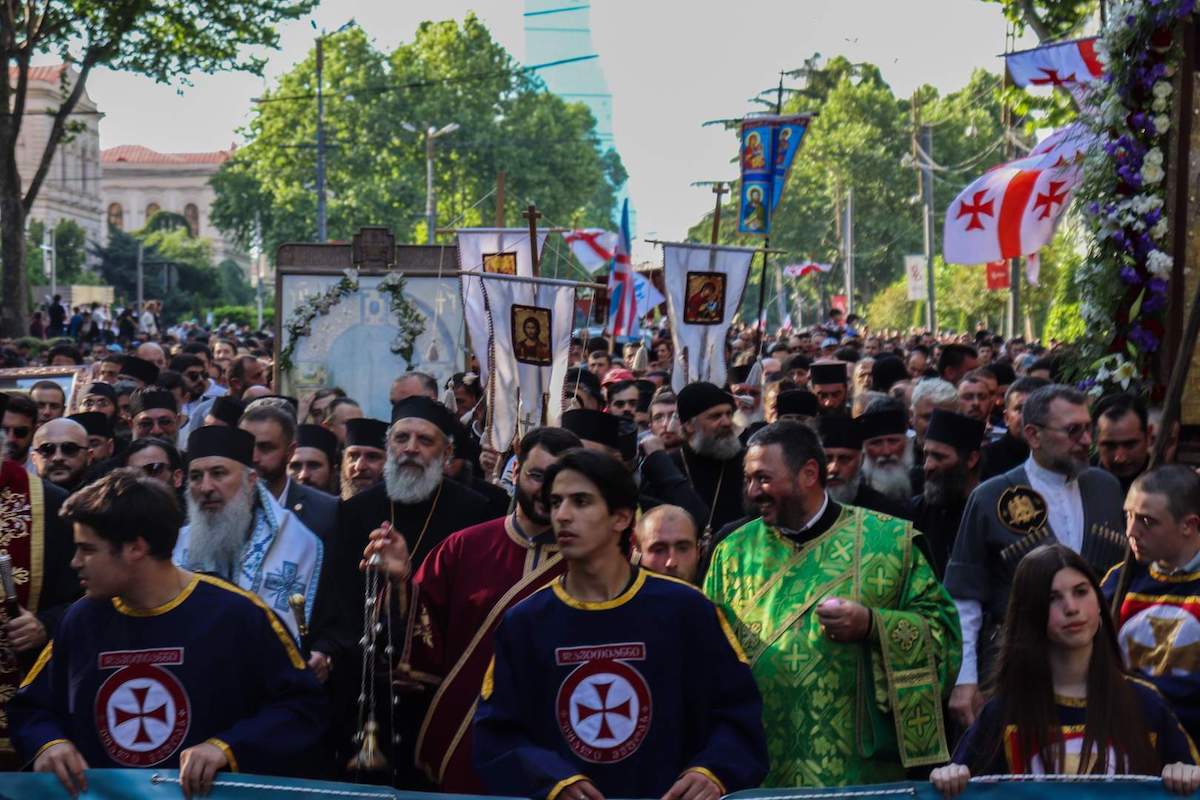 A prayer service took place at the church, after which a concert was held – famous ensembles Erisioni, Rustavi, Sukhishvili and other folklore groups took part. 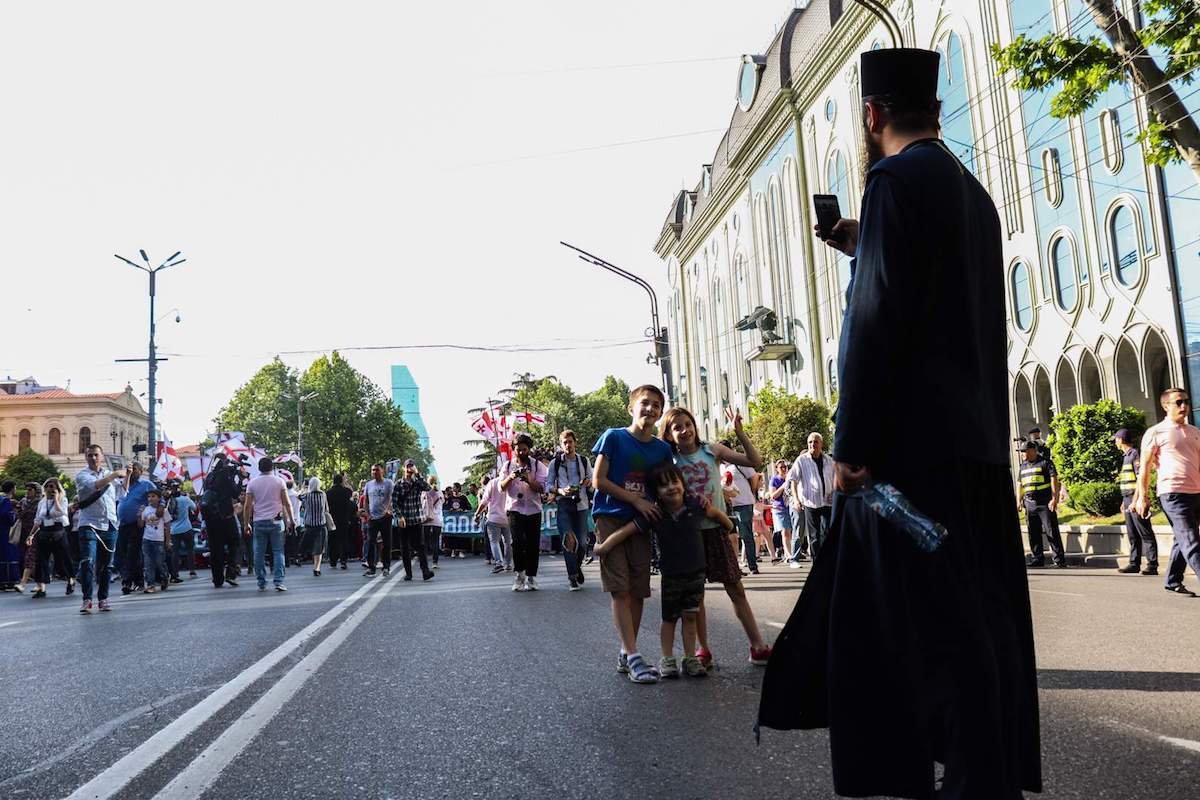 The Patriarchy of the Georgian Orthodox Church declared May 17 the Day of Family Purity back in 2014, a year after a crowd of LGBT opponents, along with priests, dispersed participants of a rally against homophobia on Rustaveli Avenue. 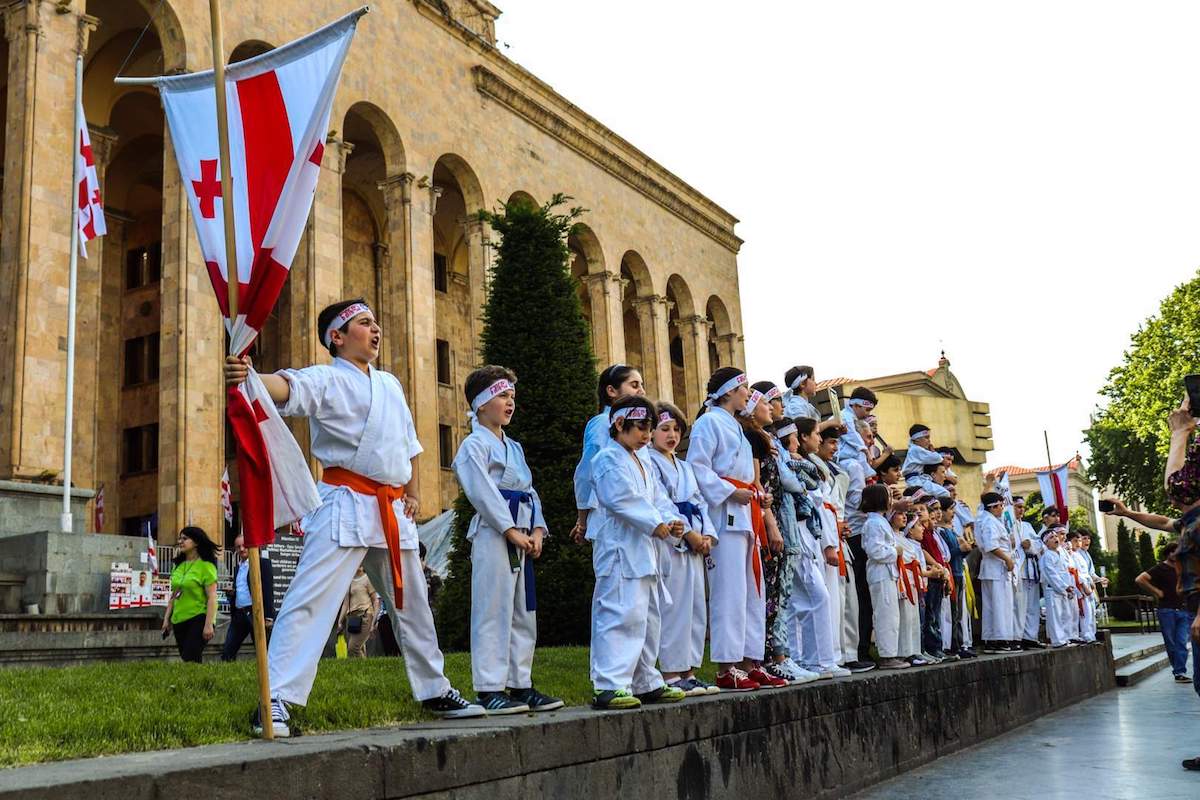 What does the government say?

“Family and family values have always played the most important role in Georgia, and it will be so in the future,” said Georgian Prime Minister Mamuka Bakhtadze.

At the same time, he noted that the rights of all citizens in Georgia are guaranteed by law.

In contrast, the Public Defender of Georgia Nino Lomjaria says that the LGBT community was not able to exercise its constitutional right this year. 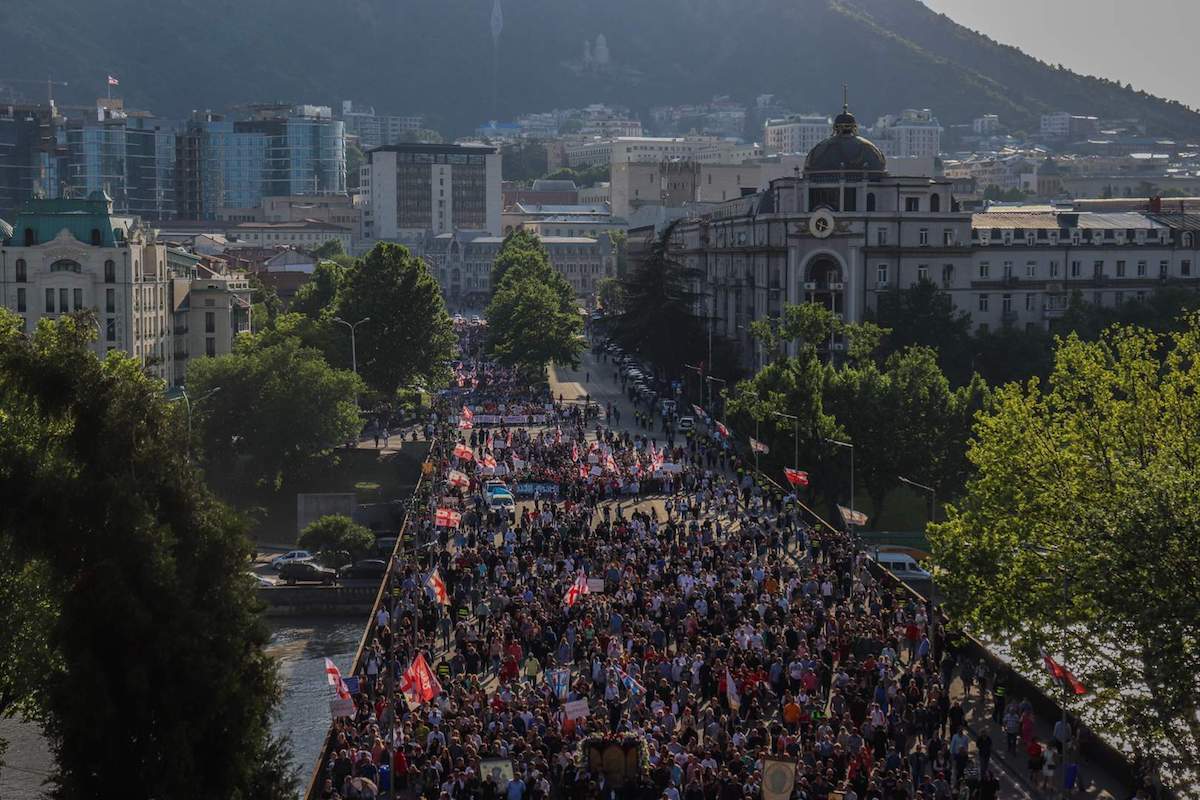 “In 2019, the International Day Against Homophobia and Transphobia was not openly celebrated by the LGBT + community and human rights advocates due to a lack of security guarantees, which is a step backwards in terms of improving the community’s status of its right to freedom of expression,” the Ombudsman said.

The public defender notes that the situation of LGBT people in the country has not changed in recent years and LGBT individuals still face homophobia, suffer from oppression, discrimination and often become victims of violence.

“Measures taken by the state are not enough to protect LGBT + people and it cannot respond to real challenges,” the Public Defender noted.

In turn, the Georgian Ministry of Internal Affairs stated that in 2018, three times as many criminal discrimination cases were initiated in comparison to 2017. 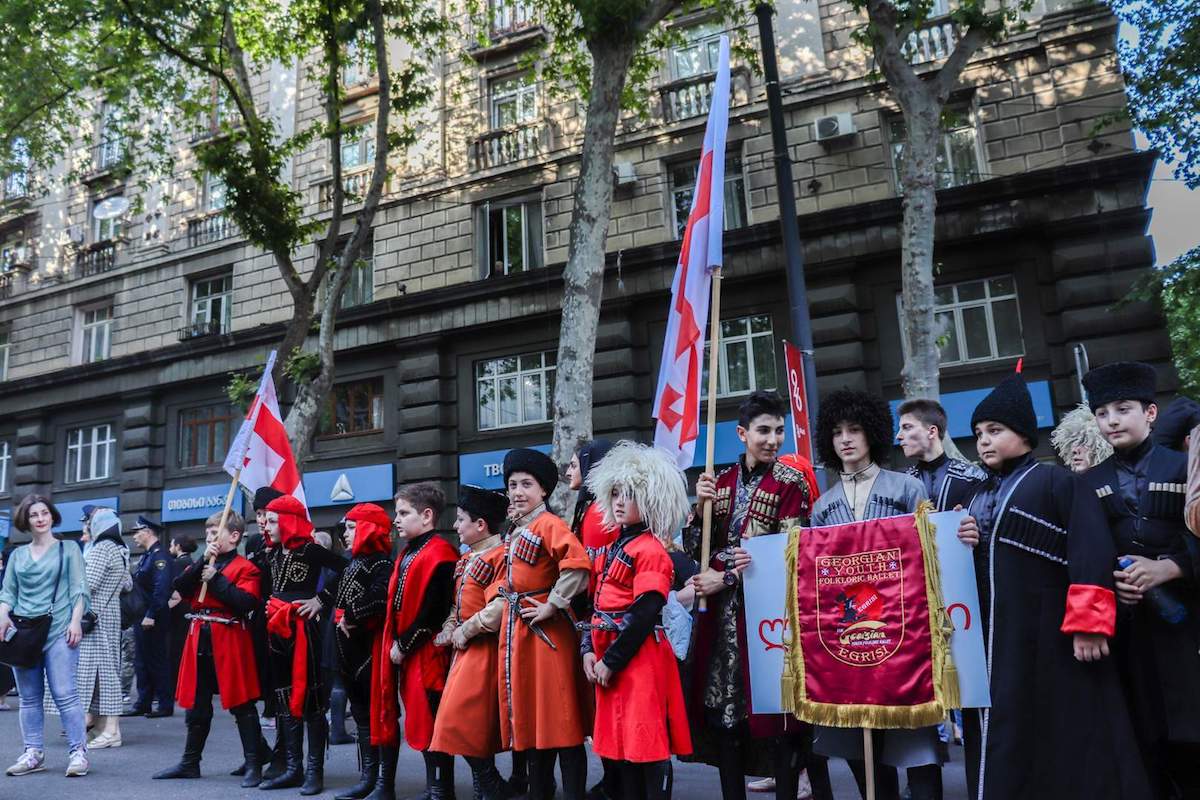 “Despite the fact that the legislation does not allow citizens to discriminate on various grounds, including sexual grounds, LGBTQI + (lesbians, gays, bisexuals, transsexuals, queer, intersex) face discrimination, incitement to hatred and physical violence that violates their rights, degrades their dignity and isolates them from society”, the statement of representatives of the partner countries of Georgia and international organizations dedicated to the Day of the struggle against homophobia and transphobia on 17 May reads.

The complete text of the statement has been published by Netgazeti.

The authors of the statement are the offices of the UN Resident Coordinator and the EU Delegation in Georgia, as well as the diplomatic mission of Austria, France, Germany, Italy, the Netherlands, Slovenia, Sweden, the United Kingdom and the United States.

According to the statement, in Georgia, the basic rights of LGBT people are protected by law and some progress has been made, but these guarantees “remain on paper”.

The statement says that LGBT + people at almost every turn face physical and psychological violence.

“This is alarming and contrary to the tradition of tolerance in Georgia,” the country’s international partners say.