“Artsakh is Armenia – and that’s the end of it!”, Armenian PM Nikol Pashinyan said while opening the Pan-Armenian games last night on August 5.

Earlier last week Pashinyan publicly announced that he intended to deliver a speech at the opening of the Seventh Pan-Armenian Games, and in doing so attracted the media’s and the public’s attention to the games in advance of its opening.

• Bold statements on military from Armenian PM, Minister of Defence at officer graduation

The Pan-Armenian Games symbolize the unity of Armenia, Nagorno-Karabakh and the  large Armenian diaspora scattered throughout the world.

This year, the Pan-Armenian Games are being held with the motto ‘Unity Through Sports’. Over 5300 athletes from 161 cities of 35 countries of the world will take part in them.

Initially, the Pan-Armenian Games were held every two years (from 1999 to 2003), but after the third games it was decided to hold the games once every four years.

Six times they have been held in Armenia – this time the event was moved to Karabakh. 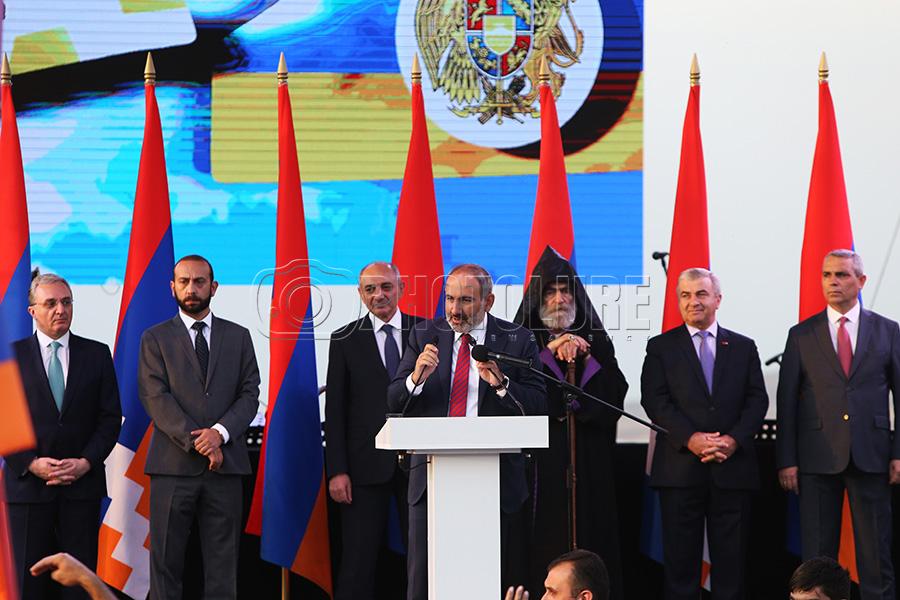 Pashinyan began his speech with a motto present during the Velvet Revolution in the spring of 2018: ‘reunion’, saying that Armenians most abandon the disunity that has been inherent in society for a long time.

“This fragmentation must be eliminated. It is necessary to abandon the concepts of ‘Karabakh’, ‘Ijevan’, ‘Gyumri’”, Pashinyan stated.

He added that the revolution of last year should be understood as a “pan-Armenian revolution”. Since it happened not only in Armenia, but also among all Armenians.

And this, in turn, means that the values ​​of the revolution are pan-Armenian values:

“The revolution should be continued in Armenia, Artsakh and among all Armenians.”

Pashinyan also called for the consolidation of efforts for the implementation of pan-Armenian ideas, the development and strengthening of Armenia and Nagorno-Karabakh.

To achieve this goal, Pashinyan believes that attracting the potential of the diaspora is highly important. He noted that repatriation is one of the priorities of the government:

“Repatriation should become one of the most important results of the revolution that took place in Armenia.”

What tasks must the government solve

During his speech, Nikol Pashinyan touch on the country’s long-term development goals, “which should consolidate national potential and centralize national resources.”

• bring the population of Armenia to at least 5 million people,

Pashinyan says that Armenia should become an industrial country. And in the next thirty years, in his opinion, the following tasks must also be solved:

• have at least five technology companies whose value exceeds $10 billion, and 10,000 working startups,

• enter the top twenty countries in the world by the army’s combat readiness index.

He also touched on education and healthcare:

“[We must] ensure 100% accessibility of health services and increase the financing of this area by a factor of 20. To make education a way of life, increase funding for science and education by 20 times.”

The head of the government also said that the number of tourists coming to Armenia is planned to be increased to 15 million people.

Pashinyan completed the list of main tasks with the sphere of sport, promising “to make the Armenian national football team the winner of the European and world championships, to win 25 Olympic medals and the title of world chess champion.”

During his speech, Nikol Pashinyan asked a rhetorical question, to which he himself answered:

“Why don’t I pronounce the word Artsakh? Yes, because Artsakh is Armenia, and that’s the end of it!”