Armenian PM at 5hr press conference on politics, dialogue with Azerbaijanis and family 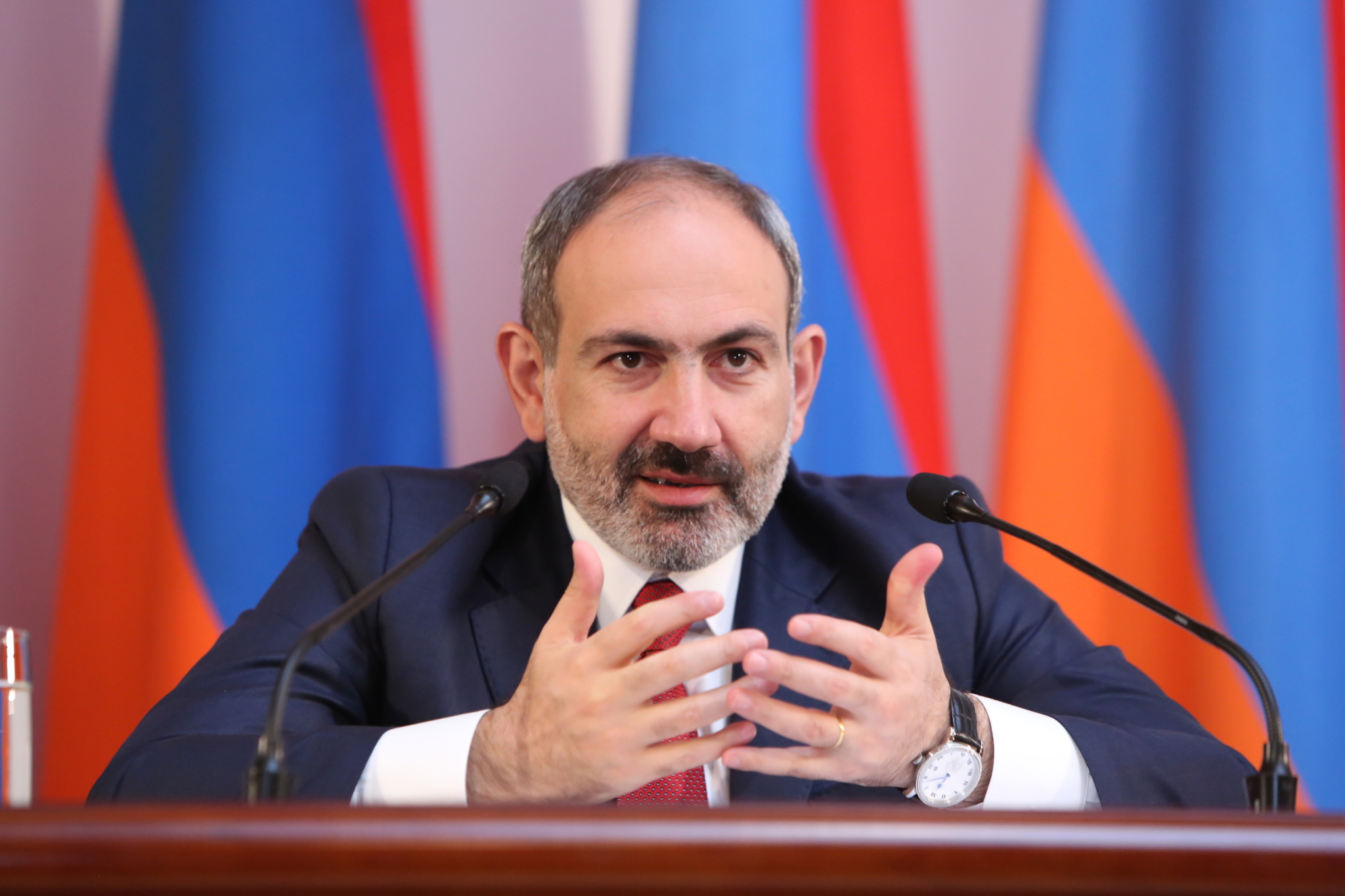 Armenian Prime Minister Nikol Pashinyan held a five-hour press conference last night, during which he promised to answer all questions. He was, however, limited by time at the end.

Pashinyan asked journalists ‘not to be shy’ about their questions.

He spoke about the Karabakh negotiation process, and the process of preparing both Armenia and Azerbaijan for peace.

Pashinyan was asked about the trial of former President of Armenia Robert Kocharyan and the independence of the judiciary in general, about the results of the fight against corruption and about Iranian gas.

He also spoke about how his family lives and responded to inquiries about his wife’s activities.

He also encouraged citizens to come out and join his personal initiative – ‘Revolutionary Work Day’.

Nikol Pashinyan’s press conference began with a question about the transit of Iranian gas through Armenia – in particular, to Georgia.

At the end of February, Pashinyan made an official visit to Iran: the issue of the transit of Iranian gas through the territory of Armenia was one of the most important items on the agenda during his talks in Tehran.

During the press conference, Pashinyan said that even before his trip to Iran, he had held talks on this issue with the leadership of Russia, as well as the head of the Georgian government and the president of Turkmenistan.

“I wanted to understand how Georgia, Turkmenistan and Russia are interested in similar projects. Following these meetings, I concluded that this issue should be one of the most important in the negotiations with Iran. Negotiations continue, and we must develop our cooperation in all possible directions with Iran, with Russia, with the European Union, with the United States, and with other possible partners.”

The Iran-Armenia gas pipeline provides energy security in case of an emergency. In exchange for Iranian gas, Armenia supplies Iran with electricity.

For the past ten years, the Armenian-Iranian gas pipeline has been used at about a third of its capacity. However, after the talks in Iran, it has already been openly announced that after the modernization of the gas pipeline, it will be able to pump the entire volume that Armenia needs (about two billion cubic metres of gas per year). This may allow Yerevan to diversify its energy system. As it is, the country buys almost all the necessary gas from Russia.

Journalists asked how the negotiations on the Karabakh conflict will continue.

When he came to power, Pashinyan announced the need for representatives of Nagorno Karabakh itself to have a seat at the negotiating table, with which the Azerbaijani side does not agree. Moreover, the mediators, the OSCE Minsk Group co-chairs in a recent statement urged leaders to refrain from unilaterally changing the format of the negotiations.

Journalists asked whether Pashinyan’s new approach to negotiations was a deadlock for the dialogue between the heads of state. The prime minister responded:

“The new initiatives of Armenia in the framework of the negotiation process on the Nagorno-Karabakh conflict are not a challenge to, but rather a call for dialogue … We will continue discussions with our friends on the basis of facts. Where our partners believe that our position can be considered extremely tough, we can soften this position, but we expect the same from our partners. Otherwise, it will not be negotiations.”

Pashinyan noted that the participation of Nagorno Karabakh in the negotiation process is provided for by resolutions that have been adopted by the international community.

Pashinyan is ready to speak with the people of Azerbaijan

The Armenian Prime Minister also stated he is ready to participate in the preparation of Azerbaijani society for peace:

“I don’t think that the president alone should prepare his society for peace. I think that I should participate in the preparation of Azerbaijani society for peace and vice versa. I wonder if the President of Azerbaijan has something to say to the peoples of Armenia and Artsakh? I have something to say to the Azerbaijani people, and I would be very happy for this opportunity. But such an approach cannot be one-sided. A constructive atmosphere is important.”

Pashinyan also called on Armenian and Azerbaijani users to stop fighting with one another on social media.

“Let’s at least find out if on social media we have anything to say to each other besides insults. I would be glad if people began to discuss, and not swear. Well, you exchanged insults, and then what? I am not saying to exchange courtesies, but after all, can there be topics for discussion? This is a platform for conversation. If we can speak at the level of heads of state, ministers, sometimes journalists, the same can be done in a wider format. I think out loud. And this is my message to users of Armenia, Artsakh and Azerbaijan.”

The trial of Robert Kocharyan and the 1 March case

The Prime Minister of Armenia also commented on the trial of former President of Armenia Robert Kocharyan in the case of the events of 1 March 2008.

Kocharyan himself says the case is one of political reprisal from Pashinyan.

On 1 March 2008, crowds were dispersed as protesters came out to demand a recount of the recently-held presidential vote, claiming their favourite, the former President of Armenia Levon Ter-Petrosyan, had won. Meanwhile, the Central Election Commission claimed Serzh Sargsyan had won the vote. During the dispersal of the demonstration, military weapons were used and 10 people were killed.

At that time, opposition politician Pashinyan represented the interests of presidential candidate Ter-Petrosyan. After the events of 1 March, he was accused of organizing mass riots and was forced to go underground. Later Pashinyan voluntarily went to the prosecutor’s office, was arrested and sentenced to seven years. He was released after a year and 11 months on amnesty.

At a press conference, the prime minister said that the lawsuit against Kocharyan is not a reprisal:

“If there was such a mood, then everything could be solved very quickly and specifically. And for this, there were opportunities and time. I am not asking anyone to consider the actions of others through the prism of their own ideas and sensations. I do not want to comment on this case in detail so that it will not be considered pressure on the judicial process.”

Issues with the media

During the conference, the Prime Minister also touched upon the issue of the expulsion of certain media outlets from the office areas they occupy.

Many media outlets have published articles arguing that this is revenge from Nikol Pashinyan for their criticism.

“Let’s break free from the framework of traditional logic. I am not taking revenge, nor do I intend to…especially taking into account that I myself was one of you at one point [a former journalist],” the prime minister said.

He assured former colleagues that the new government would not take action against the media if there were no cases of gross violation of the law.

The family of the Prime Minister of Armenia is closely watched not only by local media, but also by social media users.

The activities of Pashinyan’s wife, Anna Hakobyan, who runs charitable foundations and implements many community projects, have caused various kinds of rumors. Including the fact that she allegedly participates in the governance of the country.

“It’s impossible to imagine anything like that. The wife of the Armenian Prime Minister will not become Raisa Gorbacheva.”

Another rumor concerned the transport fleet that serves him and the life of luxury his family allegedly enjoys. He says that he and his family live within the means provided for someone of his position by the law, and no more.

A clean-up on a “revolutionary” scale

Back in February, Pashinyan organized a large-scale, ‘revolutionary’ cleanup of the country.

It will be held on 23 March. During the press conference, Pashinyan said:

“I hope everyone will come out on Saturday. I myself will personally take part in it, but I will not announce in advance where I will go. And I hope for the active participation of fellow citizens.”

Pashinyan says changes of a revolutionary scale in the country will occur only after all the garbage is removed:

“If we can get rid of garbage, waste, rusty stalls, abandoned cars, then we can achieve at least visual progress. And I am glad that the process has already begun.”

Op-ed: Turkey is searching for an 'external enemy'