Armenian opposition comes out against ‘superpowers’ of PM

The Armenian parliament is discussing a bill on the structure and composition of the government which provides for the broad powers of the prime minister’s office.

Former President Serzh Sargsyan came up with the idea of giving additional authority to the office of the prime minister during his reign as president, betting that he would later become prime minister and retain the highest degree of power.

The leader of the revolution and now Prime Minister Nikol Pashinyan is being accused of having retained the powers of the “super-prime ministership” prepared by his predecessor for himself.

The head of the Bright Armenia party, Edmon Marukyan, criticized the entire system of the state administration during a discussion of amendments to the law On the Structure of the Government.

Marukyan says the new authorities of Armenia are trying to preserve the structure that was created under the former President and Prime Minister Serzh Sargsyan.

“It is known that this management structure was called ‘the suit of Serzh Sargsyan’ – the ‘super prime minister’ system. Now you have brought [out] the same suit, removed buttons from its sleeves and say that it is a good suit. But this is the same suit that was sewn under Serzh Sargsyan … Why did you put on Serzh Sargsyan’s suit?” Edmond Marukyan said, demonstrating his point with his own jacket and buttons. 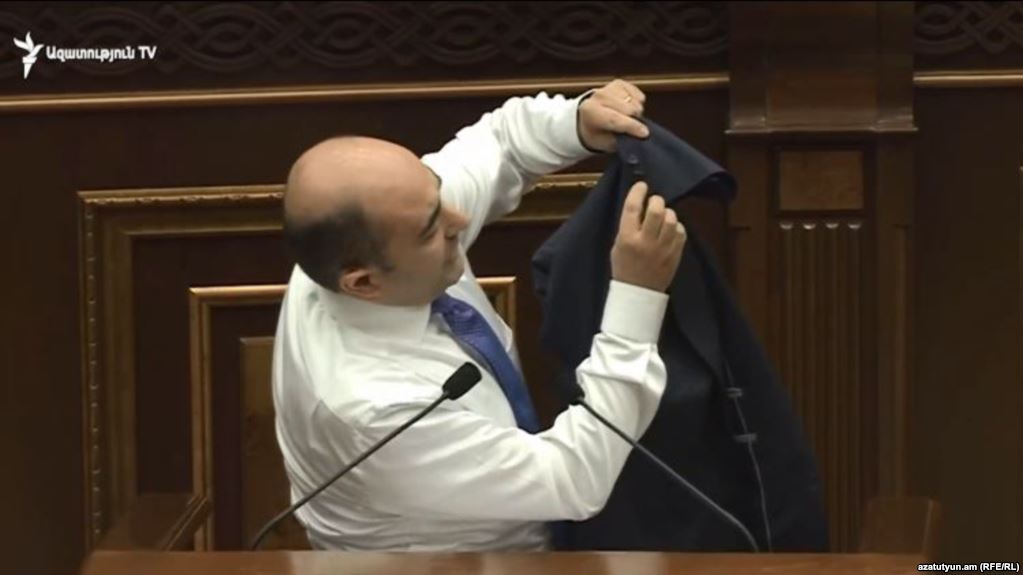 Most opposition MPs are worried about the fact that the police and the National Security Service are working in direct contact with the Prime Minister and are not controlled by parliament.

Marukyan recalled Pashinyan’s speech when he declared that the National Security Service and the police should become ministries:

“The proposal to include these structures in the government came from both of us, but was rejected by the former authorities. The system presented by you is, in fact, the same system as that of Serzh Sargsyan. You removed two buttons, but the Prime Minister in fact remained the head of the National Security Council and the State Revenue Committee. And now there is no middle level responsible for these structures.”

Marukyan said that his faction will vote against the bill.

“The transformation of law enforcement agencies into political ones is inexpedient”

The head of the ruling My Step faction, Lilith Makunts, stated during the discussion of the draft law on structural reforms in the government that, for the time being, it would be inappropriate to turn the power structures into political ones:

“We do not consider this expedient, based on both our experience and that of other countries and taking into account the concerns that these structures may cause as political bodies at this stage. Perhaps in the future we will discuss it and see that there is no such problem.”

How is the government structure changing?

It is planned to reduce the number of ministries from the current 17 to 12.

The following ministries will be subsumed into others:

According to the justice minister Artak Zeynalyan, changing the composition of the government will increase the effectiveness of the executive branch: