The centre of Yerevan was filled with delicious smells for two days this week, enticing foodies from all over to come and join. 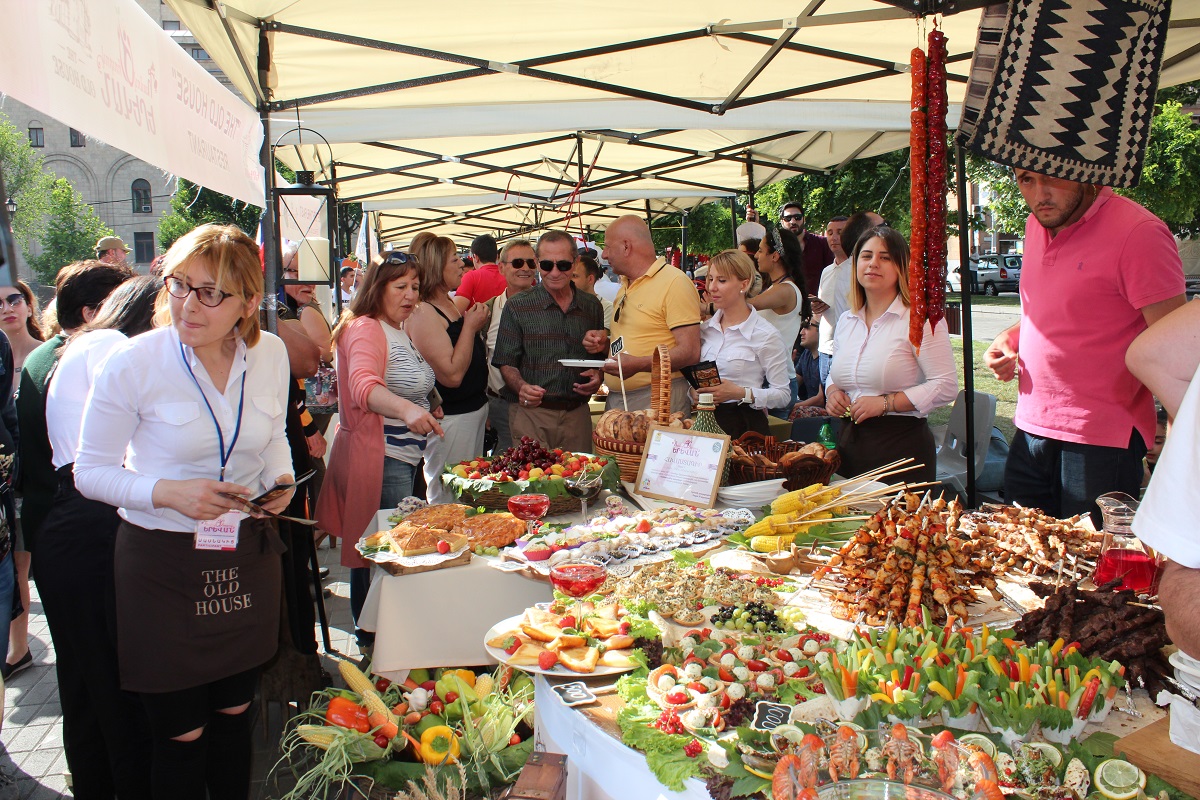 Armenian songs and dances added to the atmosphere of Yerevan’s Taste festival, which featured traditional Armenian dishes on 20 pavilions in the tourist friendly downtown area which was chosen for visibility reasons. Locals and tourists alike were offered to try popular dishes, some common to everyday Armenian cooking as well as dishes prepared according to old recipes that are rarely made, if at all. 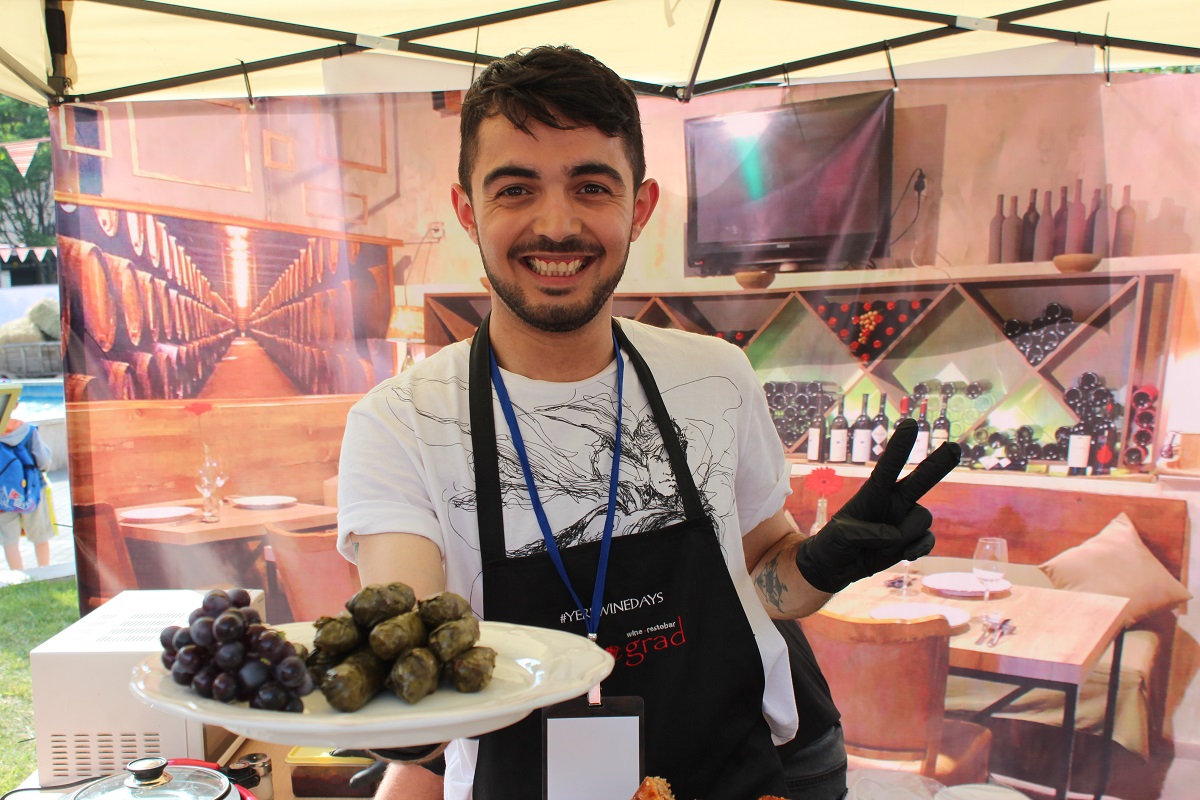 “The festival was held for the fourth time. This year more than 60 festive, even ritual dishes, which are usually prepared for the New Year or for some religious holidays, were made. This year the festival was dedicated to the 2 800th anniversary of our beloved capital – Yerevan,” said Gevorg Orbelian, the head of the Yerevan City Hall Tourism Department. 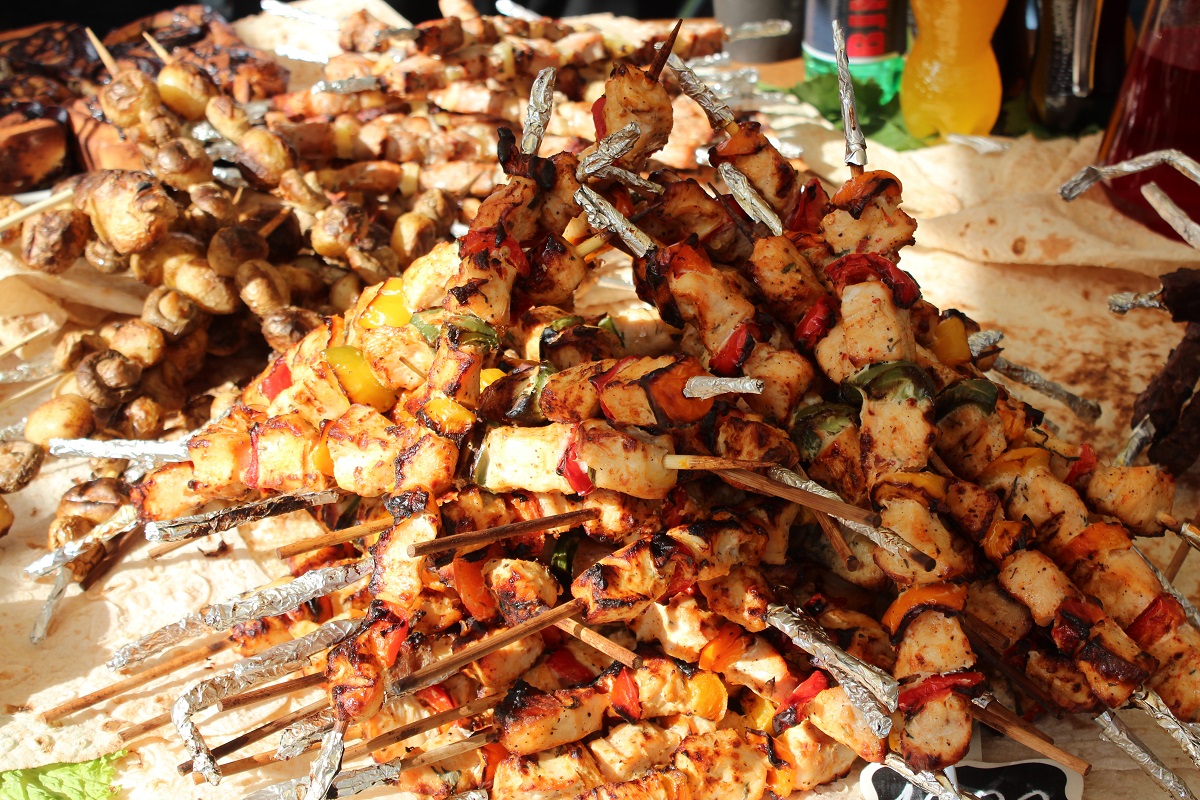 To prepare many of these traditional dishes, old utensils, which were also displayed, are used. For example chnotsi [churn], which is a special earthenware or wooden barrel suspended via a rope from logs, and in which milk is beaten to obtain oil, sour cream and tana [a sour milk drink -ed]. 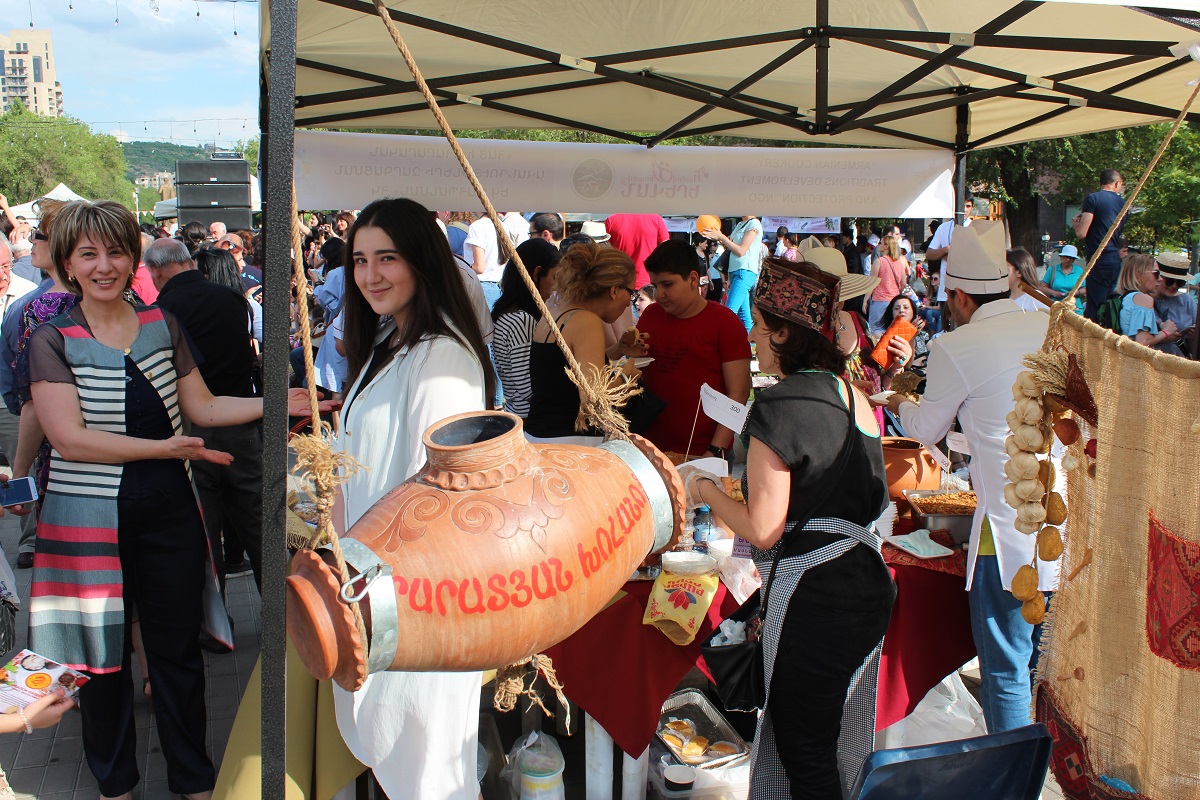 Few use it nowadays, though cooks say that without the old utensils you can’t get the right flavour. 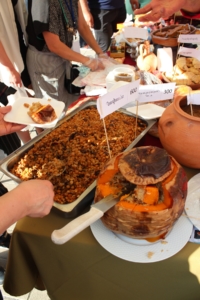 According to ethnographer Khoren Grigoryan, there are many complex dishes in Armenian cuisine. Some of the ingredients grow only in Armenia, some seasonings and products have no analogues to replace them, and the cooking process takes a long time:

“The ingredients of some dishes are slowly boiled or marinated for 10-12 days. For example, Akandzhapur, meat balls in dough soup also known as ‘ears’, is prepared by the whole family – it is impossible to cook it alone, because many ingredients are used – and everything needs to be cooked separately. It is a whole ritual. Food was given great importance, and the cohesion [of the family, which jointly prepared it -ed] was appreciated.”

The ethnographer says that in Armenian cuisine there are a lot of dishes made with lamb, veal, pork and poultry. Among them, a special place is reserved for arisa. This is a porridge made with wheat and chicken, which is cooked all day long. The tradition of preparing arisa is kept in many Armenian families, and each has its own secret recipe for how to cook the dish. 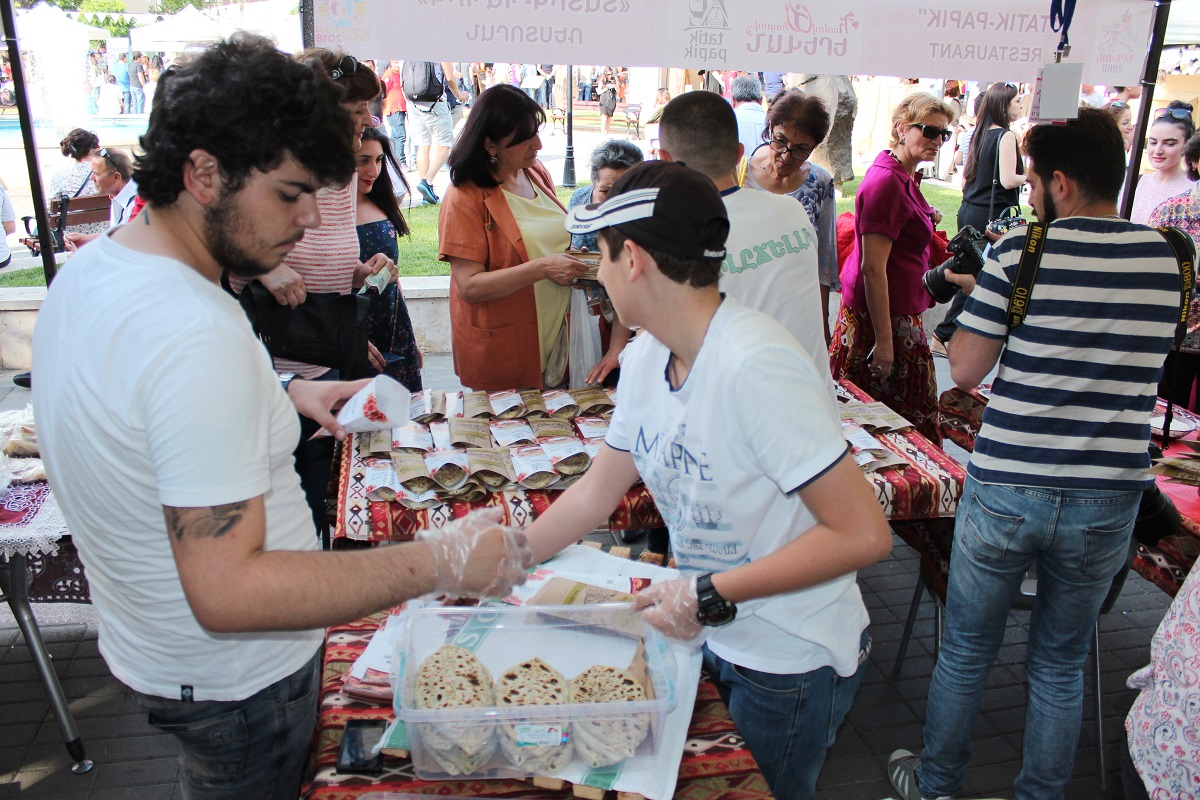 Sedrak Mamulyan , the chairman of the Preservation and Development of Armenian Culinary Traditions organization, explained the aims of the festival:

“The main thing for us [the organizers of the festival -ed] is that our people should know the fundamentals and roots of their holidays and national cuisine. And, of course, this is the best way to spread Armenian traditions and stimulate tourism.” 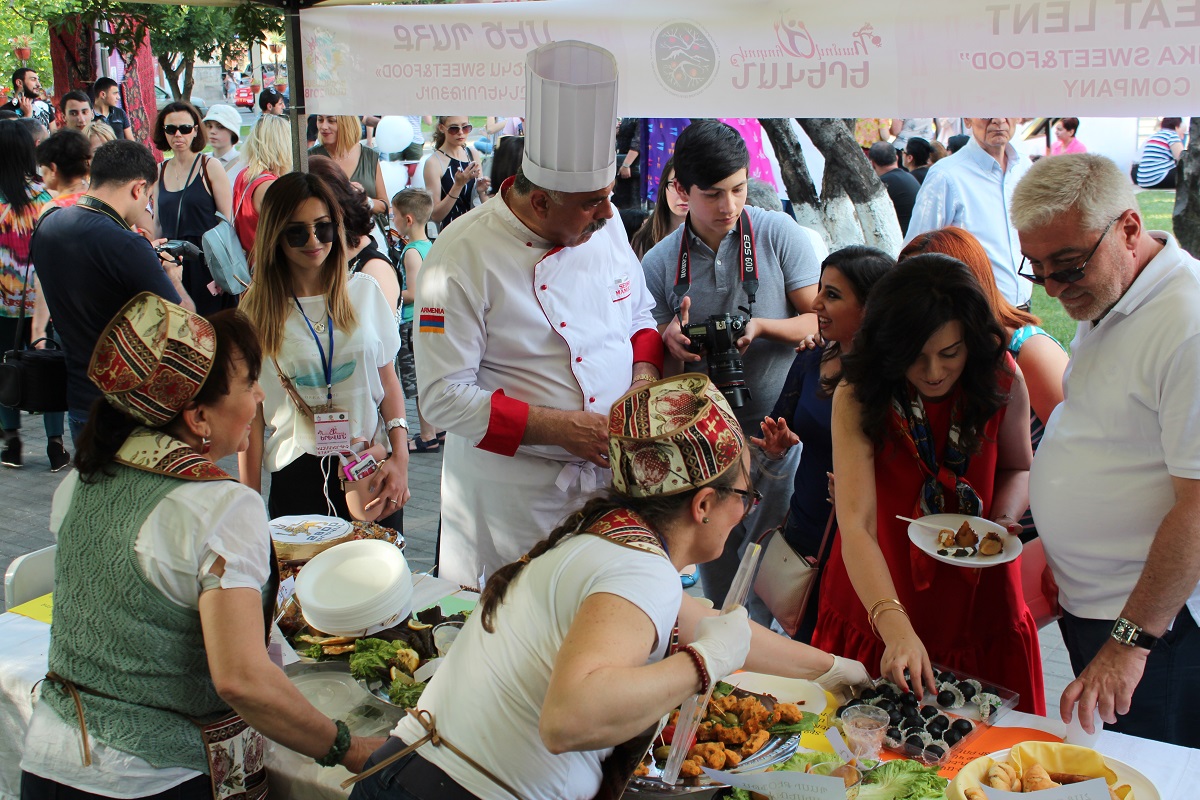 Mamoulian, a famous chef in Armenia, considers it important that people try traditional konchol soup, which is made from bread, eggs and greens. She also hopes to inspire people to start cooking gapama at home again (gapama is a pumpkin stuffed with rice made with honey and dried fruits, and that the youth learn about mshosh, a dish made of lentils and dried apricots. 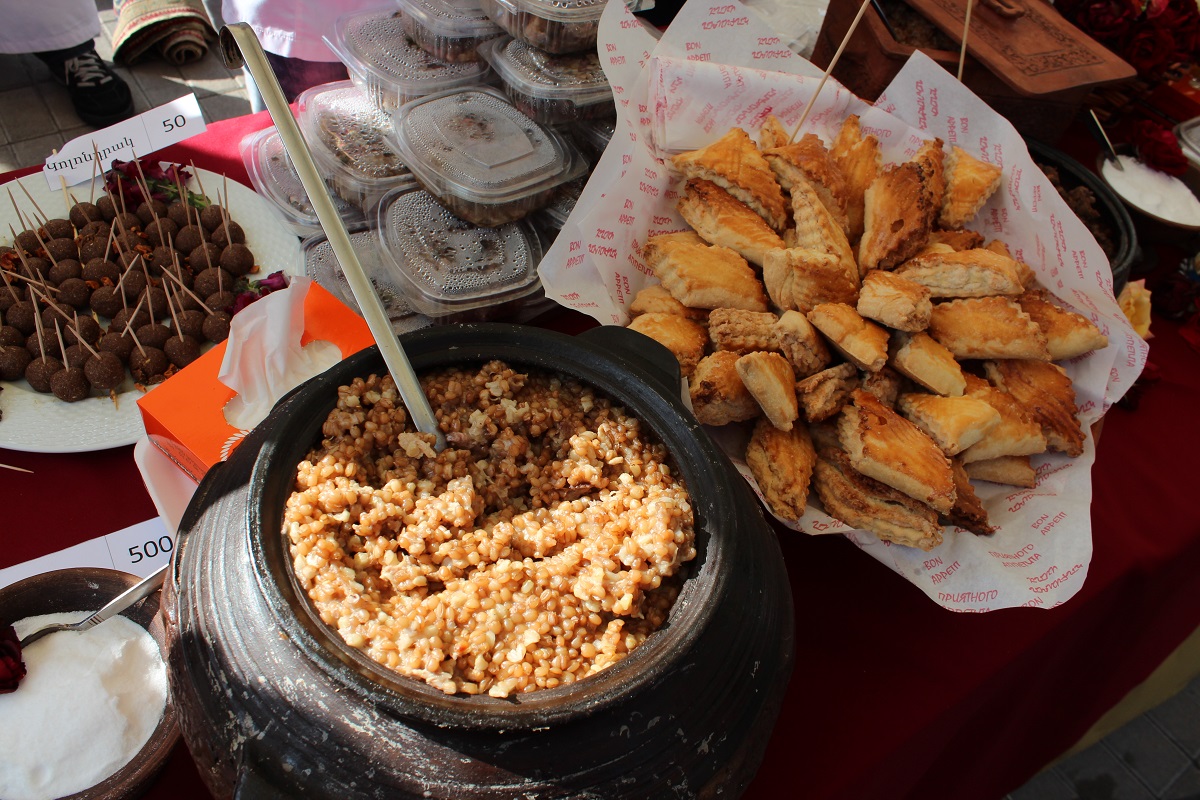 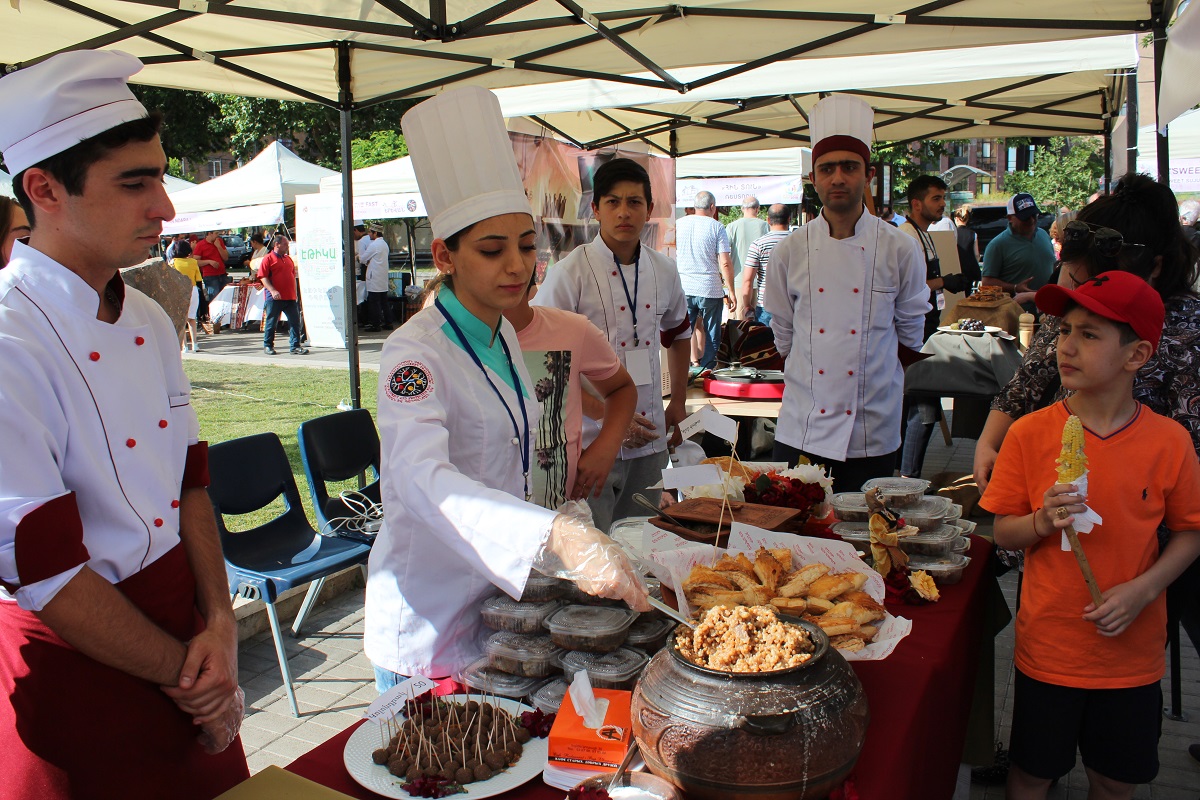 The festival attracted many tourists. Organizers believe that by trying Armenian dishes, they get acquainted with the traditions of the country and its culture, as well as mentality and character of the local residents. And since the guests will take with them these impressions and share them in their own countries, it will attract other tourists here.