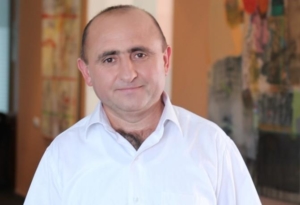 Tatul Hakobyan: an expert at Civilitas Foundation and coordinator at ANI Foundation for Armenian Studies. He is the author of ‘Karabakh Diary: Green and Black’ and ‘The View from Ararat: Armenians and Turks.’

I must say without false modesty that I could feel the breath of an approaching war. But like most Armenians, I couldn’t imagine that a new war would break out and it would claim the lives of hundreds of people.

I learned about a launch of hostilities in Karabakh on my way to Gyumri, early on the 2nd of April, one year ago. I turned the car around and headed to Stepanakert.

When JAMnews asked me to write this article, I was going to travel to Nagorno-Karabakh to shoot a film about the frontline life a year after the 4-day war in April.

From Yerevan to Talish

Early on 26 March, I got behind the wheel and drove from Yerevan to Talish, covering about 350 km.

On the night of 2 April 2016, the Azerbaijani armed forces successfully penetrated Talish, occupied 14 defensive positions and destroyed nearly all houses in the village.

The Karabakh forces managed to regain some of those defensive posts. A few dozen Karabakh servicemen were killed in Talish then. There were casualties among the civilians as well. In particular, 3 elderly people who had failed to flee to the neighboring Matagis village, were subjected to tortures and then killed in a house in the village outskirts.

Talish is one of the most mournful stories of the Karabakh war. The village was under control of the Azerbaijani armed forces for nearly 2 years, from 1992-1994. Most of the houses were destroyed. However, in April 1994, the Karabakh forces managed to regain control over Talish and some civilians returned to their homes.

When I arrived in Talish after the bomb attacks, on 4 April 2016, nearly all houses were leveled to the ground. I came across a couple of residents who returned to the village to take whatever remained intact.

I visited Talish on a number of occasions after the April war. Rehabilitation works were underway there: rural administration and ceremonial center buildings were being constructed and the water supply system was being restored. There is a power supply, communication services, and a shop which has also been opened in the village, but not a single family has returned there so far.

In the few hours that I spent in Talish, I managed to talk to the workers and builders. They said the sounds of shooting could rarely be heard in the village nowadays.

From Talish via Martakert to Aghdam and Martuni

During the April war, the Nagorno-Karabakh government opened a special account for those willing to render direct financial assistance.

A new front line was actually built on those donations, covering the area from Talish village to the Araxes River, where the borders of Nagorno-Karabakh, Azerbaijan and Iran, cross each other. It could be clearly seen from Talish and the neighboring defensive posts of the contact line, that Azerbaijan also carried out major engineering work on the frontline, especially in the sections where the Azerbaijani army managed to advance from their former positions. Those are Talish and Lele-Tepe sections.

In fact, the Armenian side admitted that during the 4-day war, it had lost about 800ha. land area, including Lele-Tepe, which is of strategic importance and which is located in the vicinity of the Araxes River.

The road leading from Talish to Matagis village isn’t visible from the Azerbaijani side. Although Matagis was also subjected to intensive shelling, the population returned to their homes a few days after evacuation.

It was a warm, pleasant spring day in Matagis. People were trimming trees, watering them and tilling the ground. The hydro-electric power plants and fish farms provided dozens of jobs to the villagers.

Martakert is the only town in Nagorno-Karabakh which is an easily accessible target for Azerbaijani artillery. It was continuously subjected to strong artillery shelling during the April war.

The situation in Martakert is calm and peaceful these days. If you are unaware that the town is just a few kilometers away from the contact line, it will never occur to you that it’s a warzone. Some traces of the 1991-1994 war are still visible there: the town was under control by the Azerbaijani army for exactly 1 year, from 1992 till 1993, and was partially destroyed.

More than half of the town’s residents, who became refugees, never returned to Martakert again. They now live in some other places, mostly in Russia. There are just 5,000 residents in Martakert now. I stayed overnight at a new hotel named ‘Martakert’.

From here I continued my way to Aghdam and then to Martuni and Fizuli. The Azerbaijani side lost 6 people in this section of the contact line in February this year, when the Azerbaijani servicemen’s attempt to penetrate into the Karabakh territory was suppressed. It has been the most serious incident for the Azerbaijani side in less than a year after the April war.

Before that, on 29 December 2016, the Azerbaijani units’ attempt to cross the Armenian-Azerbaijani border in the vicinity of Chinar village resulted in the death of 3 Armenians and 1 Azeri.

It has been the most serious death toll following the April war. However, dozens of Armenian and Azerbaijani servicemen have become the victims of sniper attacks throughout the year. To put it short, a ‘neither war nor peace’ or ‘both, war and peace’ situation has been maintained along the entire perimeter of the Armenian-Azerbaijani border.

After spending a night in Hadrut, I headed to Lele-Tepe, but before I reached it, I continued along the Araxes River to Jebrail, Gubatli, and then to Goris, which is in Armenia. I covered the entire contact line within 3 days, talking to many people on the way.

Everyone whom I met realized the threat of a new war and they stressed the need for peace. However, once I reminded them that the issue of the return of the territories was also discussed during the talks, no one wanted even to hear about it. As far as I understand, people are not ready to pay for peace if the return of territories is a price for it.

The April war dealt a serious blow to the negotiation process, and the Armenian proponents of establishing peace with Azerbaijan trough returning territories have considerably dwindled in number.

Yerevan has officially stated on a number of occasions its readiness to settle the conflict based on Madrid Principles, that suggests the following: Azerbaijan is returned its territories and, in turn, it recognizes Nagorno-Karabakh’s right to self-determination. Armenia’s first president, Levon Ter-Petrosyan, regards such a settlement option as quite acceptable and claims, he stands ready to support Serzh Sargsyan in this regard.

However, Ilham Aliyev isn’t ready to sign a document that will rightfully enshrine the established de-facto status of Nagorno-Karabakh. In response to that, Serzh Sargsyan stated as follows: “The security of Nagorno-Karabakh’s population could be ensured only outside of Azerbaijan.”

The Presidents met twice since the April war: once on the sidelines of the OSCE Minsk Group meeting in Vienna, on 16 May, and as part of a meeting with Vladimir Putin, in St. Petersburg on 20 July.

While there is no progress in the peace process, the parties keep arming themselves and updating their military arsenals.

In February, the Stockholm International Peace Research Institute published its annual report, according to which, Azerbaijan imported 20 times more weapons than Armenia over the past 5 years. Azerbaijan mostly procures weapons from Russia, which is regarded to be Armenia’s strategic partner.

Russia also sells weapons to Armenia. The Iskaner ballistic missile systems were shown during the military review in Yerevan’s central square, in September 2016. At the same time, Armenian President,Serzh Sargsyan, had recently stated in Stepanakert that “today, the Commander-in-Chief of the Armenian Armed Forces [referring to himself] will order, without batting an eyelid, to fire the Iskander if necessary, and the neighboring country is well-aware of it.”

Meanwhile, Azerbaijani President Ilham Aliyev avails himself of any opportunity to state that if the Armenians don’t leave Azerbaijani land, Azerbaijan will have to settle the Karabakh conflict through military means.

The opinions expressed in the article convey the author’s views and terminology and not necessarily reflect the position of the editorial staff.