Based on material from The Caucasian Knot

It’s night time. Men in uniform and cars stopped alongside the road leading to a village called Klesov in western Ukraine. On both the right and left sides are dozens of motorized pumps and hundreds of people. All this despite the fact that the authorities have announced the defeat of the so-called ‘amber-mafia’.

Prospectors work with pumps at night, and pick up the pieces during the day.

“I got a bit. I go around and I dig it out. It works out. What else am I supposed to do?” says one woman who we met on the road not far from the ‘Amber Klondike’.

She’s on a scooter, in rubber boots and wielding a scoop-net – a widely used tool here among residents. The woman doesn’t live far from here, but declines to tell us her name and asked us not to show her face.

“I have been digging for amber for three years already, maybe even four. I need money for my home which I am building, and for an operation for my relatives. I have to do it. Otherwise I just don’t know what else to do. I have four boys and a girl,” she says. 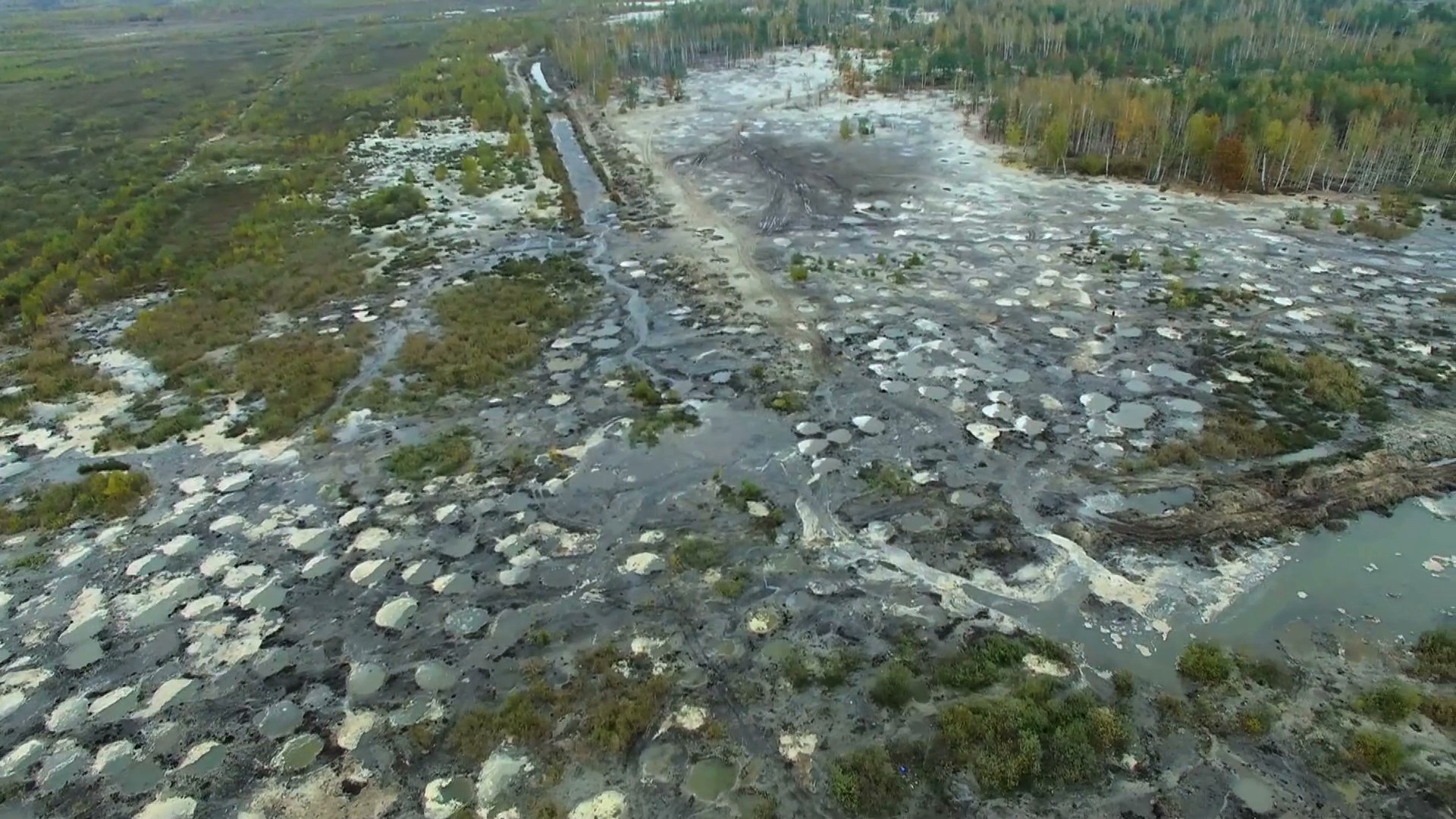 The money that she gets from these night-time excursions is enough for education, building her home and her day-to-day life. Almost all the local residents live and earn money like this.

“It’s been like this for a hundred years. Someone did it back then – someone does it now,” says the Klesov resident.

“But for a long while people weren’t doing this – and now they’ve started again?” we asked.

“There’s some understanding [between the people and the state]. I don’t get involved in it. They have their own problems,” she says.

The outskirts of the village are easily visible – there is a road that is traveled upon by hundreds of automobiles ever day.

Different sources give us different ‘ticket prices’ for the right to mine amber: it costs 250 – 350 dollars to install a pump here, and 1 000 dollars to get water from ready-made canals. 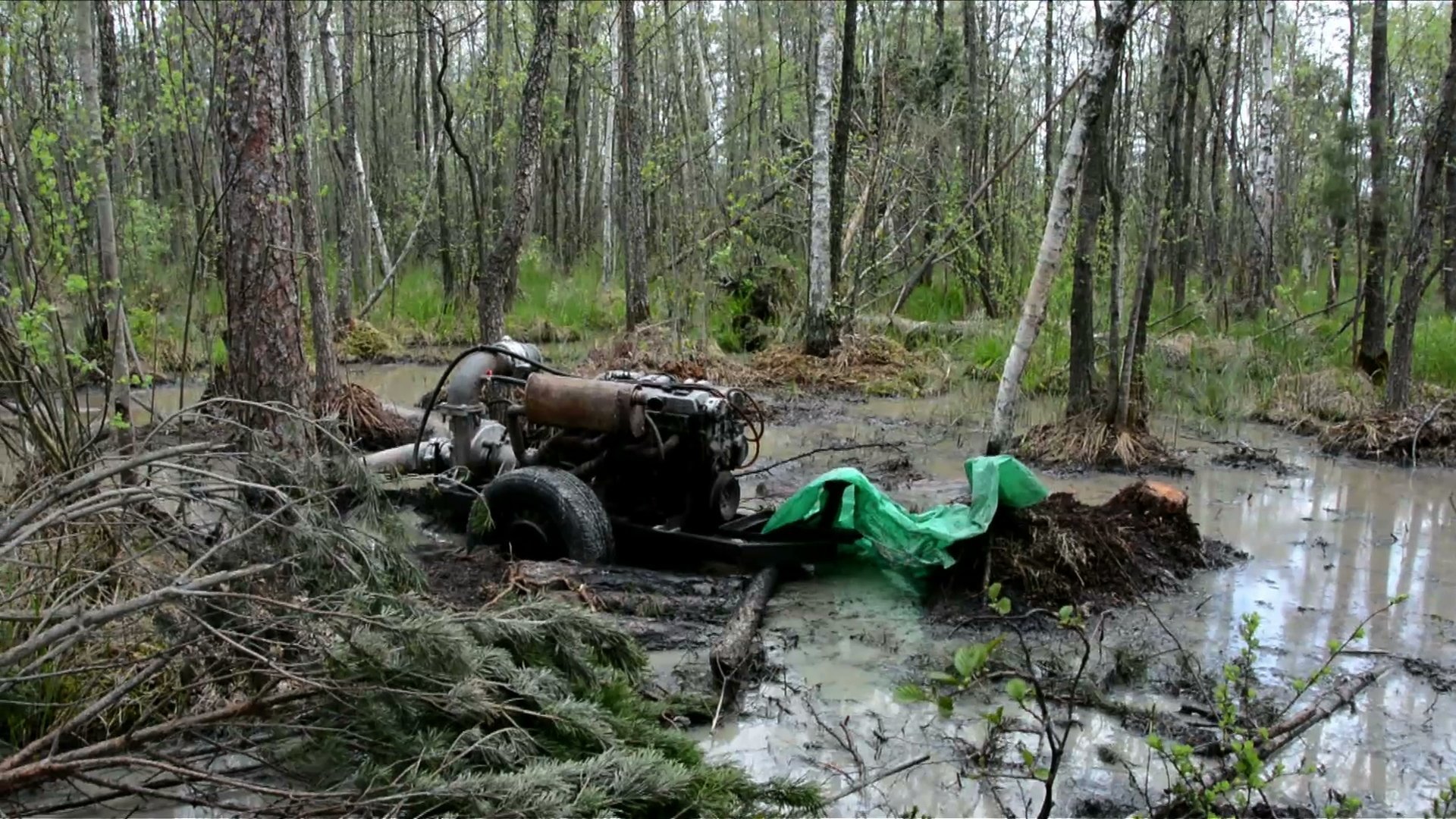 The head of the Sarnenski police department, Sergey Smalyuk, believes that the illegal amber mining is not taking place on a massive scale so far. He believes that in recent times there has been very little occurrence, and he tells us that what we filmed on camera was a unique case.

“Mass mining is, in my opinion, a hundred motors, fifty motors. That would be large-scale mining. There are occasional cases of this. I can’t say anything more,” says  Smalyuk.

“One week ago we observed how there were several motors working there. They were digging out new canals and the pumps were running,” we continued.

“There is currently no mass mining of raw amber on the territory of Sarnenski district,” says Smaglyuk, accentuating every syllable.

While the police try to deal with the mining, or at least show that they are combating it, prospectors fearlessly and without end publish photos and video proof of their own work.

In one of the local groups on social media we were able to find an advertisement looking for workers from among the local residents.

“Yes, well we need workers. Workers in Olevsk. Where are you from?”

Workers are given tools and paid either about 5 000 – 6 000 hriven a month or are given a percentage of what they are able to mine. The person we got in touch with turned out to be a caring and conscientious sort of type, and was ready to offer us a sort of ‘minimal packet’ of benefits.

“If you get some people involved, about four or five people, I’ll even set up some small accommodation for you…I have my prices written here – either twenty percent of the takings or a stable salary, whatever you like. I’ll find you a home – well, in theory there are already accommodations next to the spot you’d be working at. There’s electricity, heating – it’s a warm little place, we’ll bring the firewood,” said the man.

“We work by night. We’ll keep talking, we’ll make it work out with the police. Maybe we can even work during the day,” says the employer.

He also says that we could come and work with our own pumps, and that he would solve the problems with the police.

“Just in case, I’ll make it work out with the police, and I’ll take a small percent from the earnings. But that’s in a few days time. In one word, they said that before Saturday the matter will be cleared up, and just how and where the police will allow us to work,” he says.

We sent a request for an interview with the head of the National Police, also asking them to comment on the amber mining situation.

In response, we received a letter from the National Police’s communications department with statistics and general information.

All the while, illegal prospectors of different categories continue to work towards exhausting Ukrainian mineral resources.