A new metro, railway and electric cars: promises made to the Georgian public a week before elections 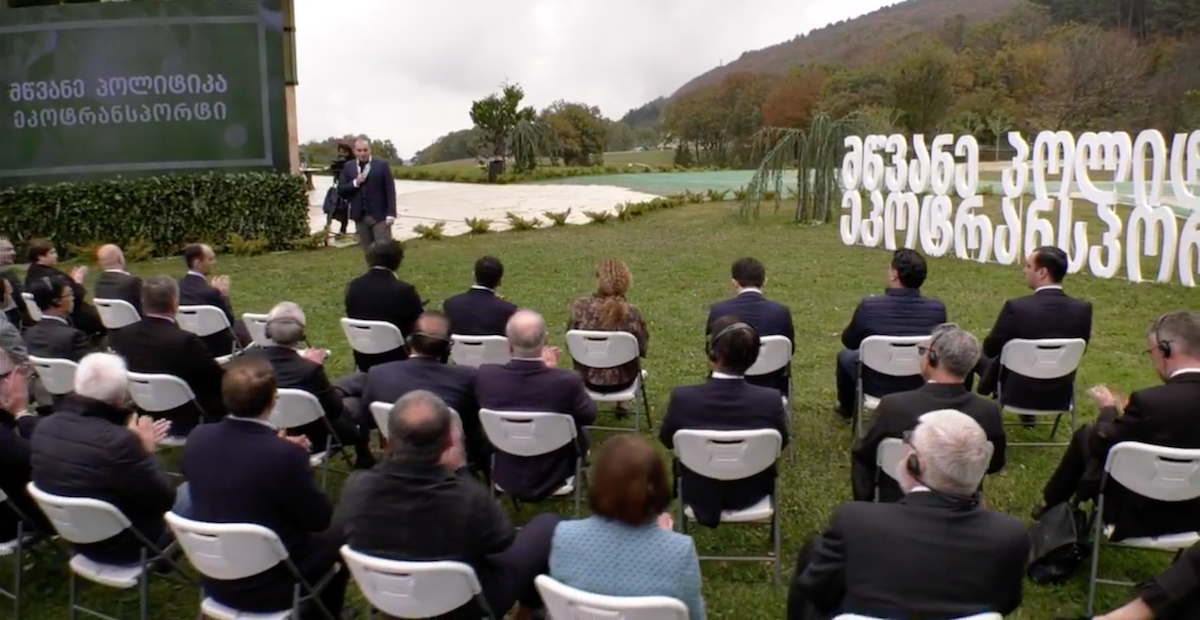 The Georgian government made a number of impressive promises today:

• A new metro line will be built above ground in the direction of the airport which will connect the capital of Georgia with the neighboring city of Rustavi;

• Tbilisi may soon be rid of its clumsy and polluting minibuses;

• Within 10 years the vehicle fleet of Georgia will consist 90 per cent of electric vehicles.

This is by no means a complete list of the promises that residents of the Georgian capital have heard from Prime Minister Mamuka Bakhtadze and Tbilisi Mayor Kakha Kaladze today.

The Prime Minister also presented a new project called the Green Policy – Ecotransport, part of which will be the development of the metro system in Tbilisi.

The project, which includes laying down a new rail line which will bypass the central part of Tbilisi, began in 2010. However, it was suspended in 2012 after the Georgian Dream party came to power, like many other projects that were launched by the previous government.

Six years later, on the threshold of the 28 October presidential elections, the authorities have decided to bring it back to life.

“Today we are announcing a very important project. We will use the infrastructure of the bypass railway and build new metro stations from Samgori in the direction of Lilo.

“In the future, this line will allow the city of Rustavi to be connected to the infrastructure of the Tbilisi metro. The project really is of historical significance,” Bakhtadze told Novosti Gruzii.

Bakhtadze also stated that the decision made previously to suspend the project was fair as the plan was old-fashioned and needed to be improved.

The following clip demonstrates what the new above-ground metro will look like:

Tbilisi Mayor Kakha Kaladze also spoke about the details of the new project, and said the construction of the new above-ground metro will begin at the end of 2019.

Kaladze says that six new trains will initially run on the line. The waiting time will be 10 minutes, but will gradually be reduced.

“We will increase the number of train cars and reduce the waiting time … As a result, this will actually create a basis for establishing order in the city, creating a clean environment and comfort for our citizens,” Kaladze said.

The prime minister also said that the government had already developed a plan in which 90 per cent of the cars in Georgia will be electric cars within 10 years, but he did not specify the exact nature of the plan.

Bakhtadze said that a green economy is an important strategy for the government of Georgia.

The Tbilisi metro currently has 23 stations which are located on two lines – Akhmeteli-Varketili and Saburtalo.

The lines span for 57 kilometres, of which the first line is 40 kilometres and the second is 17 kilometres.

The waiting time at rush hour sometimes exceeds 10 minutes, which is why the subway is often very crowded and people often complain on social media.

“Tbilisi Metro!!!! Every day I grow more convinced that we have the most incompetent and indifferent government! Traffic jams on the roads, overcrowding in the metro … Finally I have realised that the city which I used to love no longer exists.”