A horrible message from 2008

JAMnews, based on Meduza

Oksana Sevastidi, a Russian citizen, has been sentenced to 7 years in prison on the charges of high treason. Shortly before the August war in 2008 over South Ossetia, she had sent several text messages to her acquaintance in Georgia. Oksana wrote, she had seen a train with military hardware in Sochi, which, according to her, was heading to Abkhazia.

Criminal proceedings against Sevastidi were instituted in 2015 and she was adjudged in March 2016. However, this case has become much publicized just now. Oksana Sevastidi was appointed a new lawyer, Ivan Pavlov, who is famous for defending political prisoners in Russia. It was he who made a statement for press.

Oksana Sevastidi’s verdict provides a detailed description of the developments that preceded the August war, including the numbers of military units and the types of equipment transported by rail.

“If compared with the verdict, her text message is just a drop to the ocean in terms of importance and sensitivity of the information contained in it, said Ivan Pavlov, Oksana Sevastidi’s lawyer.

Oksana Sevastidi, 46, is a resident of Sochi. Her mother is a pensioner. She has quoted the content of the text message, for which her daughter was sent to jail. “Oksana responded to her acquaintance’s question, whether there had been tanks in Sochi, and her answer was negative. ‘Oksana, are there tanks on the platform there, in Sochi’? She sent an answer: ‘They used to be stationed here, but I don’t know, whether there are any now’.

The retired woman claims, her daughter met the message recipient only twice in her life. He was a casual distant acquaintance.

Having learnt that Oksana had been sent to prison, her grandmother had a stroke from which she died.

Oksana Sevastidi was charged for high treason. She has been serving sentence in Kineshma penal facility.

Her mother says,she has recently received a letter from Oksana. She wrote that she had appealed to the FSIN (Federal Penitentiary Service of the Russian Federation), requesting to transfer her to a penitentiary facility that would be closer to home – in Krasnodar region. However, her request was turned down, because there were allegedly ‘no reasons for her transfer’. She wrote that she’d seen snow for the first time in her life,and also, that she wasn’t treated badly in the penitentiary facility. She said, the penal facility chief had called her once and asked: ‘Just let me look at you, I have never had an inmate sentenced under such an article. So, what did you do that was so bad that you’ve been sent here’?

In November 2014, Ekaterina Kharebava, a resident of Sochi, was sentenced to 6 years in prison for sending similar text message about movement of military hardware in the direction of Abkhazia in 2008. Her case was dealt by the same judge who issued a judgment against Sevastidi.

Ekaterina Kharebava, a native of Abkhazia, had lived in Sochi since 1990 and worked as a vendor at the market. She was released on parole in June 2016.

– When and under what circumstances were you arrested?

– In early January 2015, I received a phone call from the FSB of Krasnodar region and was asked to come for an interview. The matter allegedly concerned my husband’s citizenship. But he had renounced Georgian citizenship and took the Russian one, so, what questions could there have been?

I went to their Sochi department. Then I was taken to Krasnodar by car. The State Security Service officers, who were escorting me, were sure I would be interviewed and then released. But I was taken to the department in Krasnodar never to see the freedom again. First I was arrested for 2 days. On January 16, a 2-month arrest warrant was issued. And that’s when all hell broke loose: 2more months, then another 2 months for the investigation period.

– What was your relatives’ reaction to your arrest?

– My mother has recently had a stroke. And my grandmother’s heart failed when she’d learned about it. She died in April 2015. I also have some health problems – my diagnosis is included in the verdict, I have the first stage of hypertension. I have to take pills, to do injections, otherwise my blood pressure jumps up to 200. And also, my eyesight has worsened after that incident- I can’t read and write without the eyeglasses.

– How was the trial proceeding?

– The prosecutor didn’t allow me to say a single word in my defense. It was all done in one day: the last plea, the closing arguments and delivery of judgment. Everything was quick and crumpled, like in a dream. And then I heard as if through a veil: ‘Seven years.’

But my case isn’t an isolated one. Kharebava’s case is pretty much the same as mine, as like as two peas. When I was in pre-trial detention facility, I heard that an Armenian national from Adler was sentenced to6 years for high treason. All of us, Kharebava, that Armenian woman and I, had one and the same investigator, prosecutor and judge.

-Do your relatives and friends visit you?

– Two friends have recently visited me: one is from Moscow and another one – from Latvia. I don’t want my mother or my husband to come here. I will be harder for me to let them go afterwards.

– What are your expectations with regard to the case outcome?

-I don’t know. I can’t believe that this is happening to me. I’ve always been a law-abiding citizen;I’ve never been imposed even a single fine. I still can’t believe it.

On December 1, 2016, Ivan Pavlov, Oksana Sevastidi’s lawyer, filed an appeal with Krasnodar regional court, addressed to the Supreme Court, as well as a petition for restoration of a judgment appeal period.

In Pavlov’s words, the issue on restoration of the appeal period should be decided already this week. 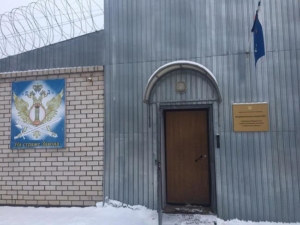