The ruling parliamentary party is holding a meeting after MPs were able to enter the parliament following the special forces’ dispersal of the thousands-strong protests in front of the parliament.

Parliament speaker Archil Talakvadze said at a ruling party meeting in parliament that no changes would be made to the constitution now.

The next parliamentary elections, he said, will be held as planned in 2020 according to the currently existing mixed – proportional-majority system.

However, the parliamentary elections in 2024 will be held according to a  proportional system.

• What are the Tbilisi protests are about?

Thousands of activists are blocking Tbilisi parliament, demanding resignation of the government and early parliamentary elections.

Protests in Tbilisi and several other Georgian cities began on November 14, when parliament failed to pass a constitutional amendment on electoral law.

Meanwhile, the protests in June 2019 came to an end to a large extent precisely because the leader of the ruling Georgian Dream party Bidzina Ivanishvili yielded to the demands of the opposition and personally promised to abandon the majoritarian system and adopt a proportional (party) parliamentary system with a zero electoral threshold.

The next parliamentary elections are scheduled for 2020.

Mostly it was majoritarian MPs who abstained from the ruling Georgian Dream party.

On the same day, opposition and civic activists announced the beginning of protests, pitched camp on Rustaveli Avenue and said they refused to leave until the demand would be satisfied.

The Ministry of Internal Affairs of Georgia says 18 people were detained earlier today during the dispersal of the rally in front of the parliament in Tbilisi.

Among those detained was the leader of the opposition Girchi party, Zurab Japaridze.

Parliamentary majority MPs have entered the parliament and intend to hold a meeting of the bureau after special forces and police detachments broke up the rally in front of parliament.

• Some unusual shots from TV channel Formula – protester sitting on the sidewalk in front of special forces and playing the flute. The dispersal of thousands-strong protest is already in full swing

Police and special forces dispersed thousands of protesters in front of parliament in Tbilisi. On Rustaveli Avenue, the parliament is relatively calm.

However, on Freedom Square and on the territory closer to the Rustaveli metro station, there are still hundreds of people gathered. They continue to speak out and call for protest using speakers and microphones.

However, most of the avenue is controlled by special forces. The tents in which the protesters spent two days have been completely demolished. 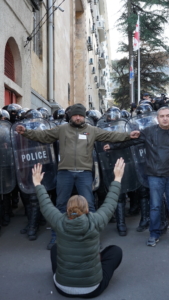 Against the backdrop of the ongoing violent dispersal of the rally in Tbilisi, a meeting of opposition leaders with several ambassadors of Western countries in Georgia has begun. The meeting is taking place at the Courtyard Marriott Hotel.

Police and special forces have nearly ousted thousands of protesters from Rustaveli Avenue, where a large-scale protest rally has been taking place over the past three days. However, hundreds of activists moved to Liberty Square below, and say they will not leave the area. 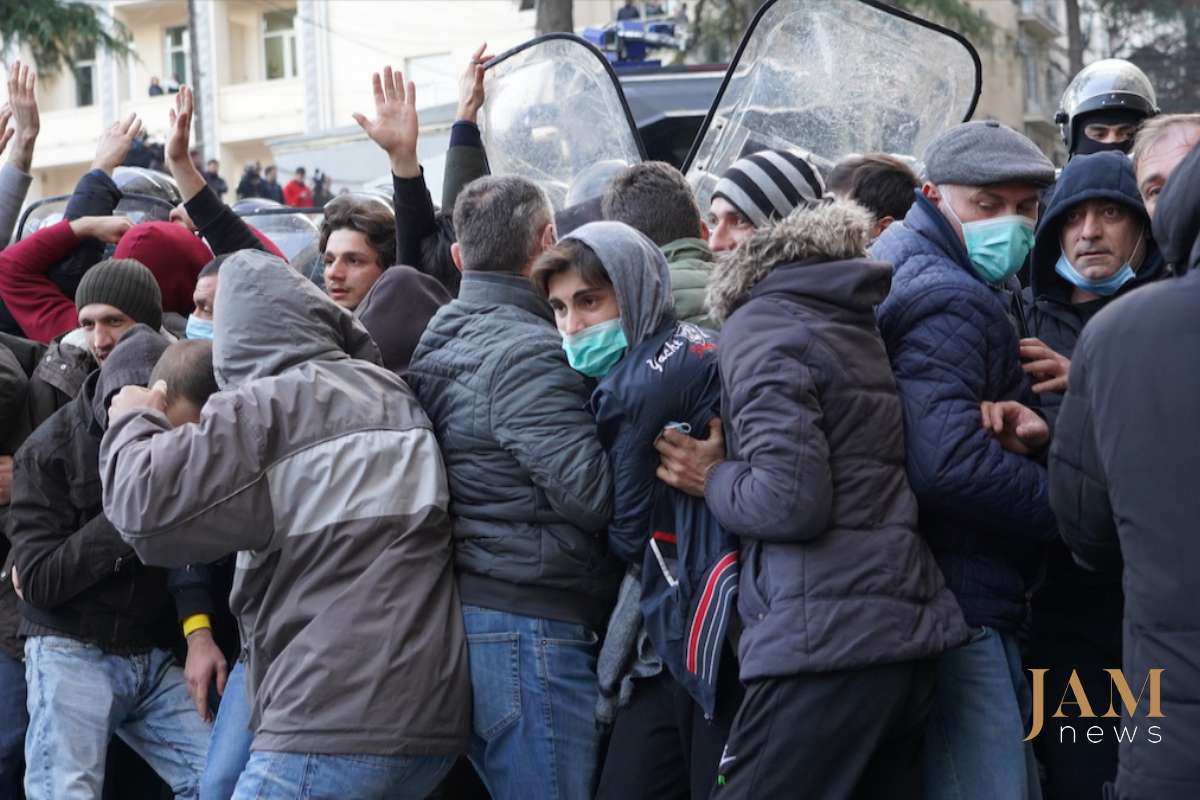 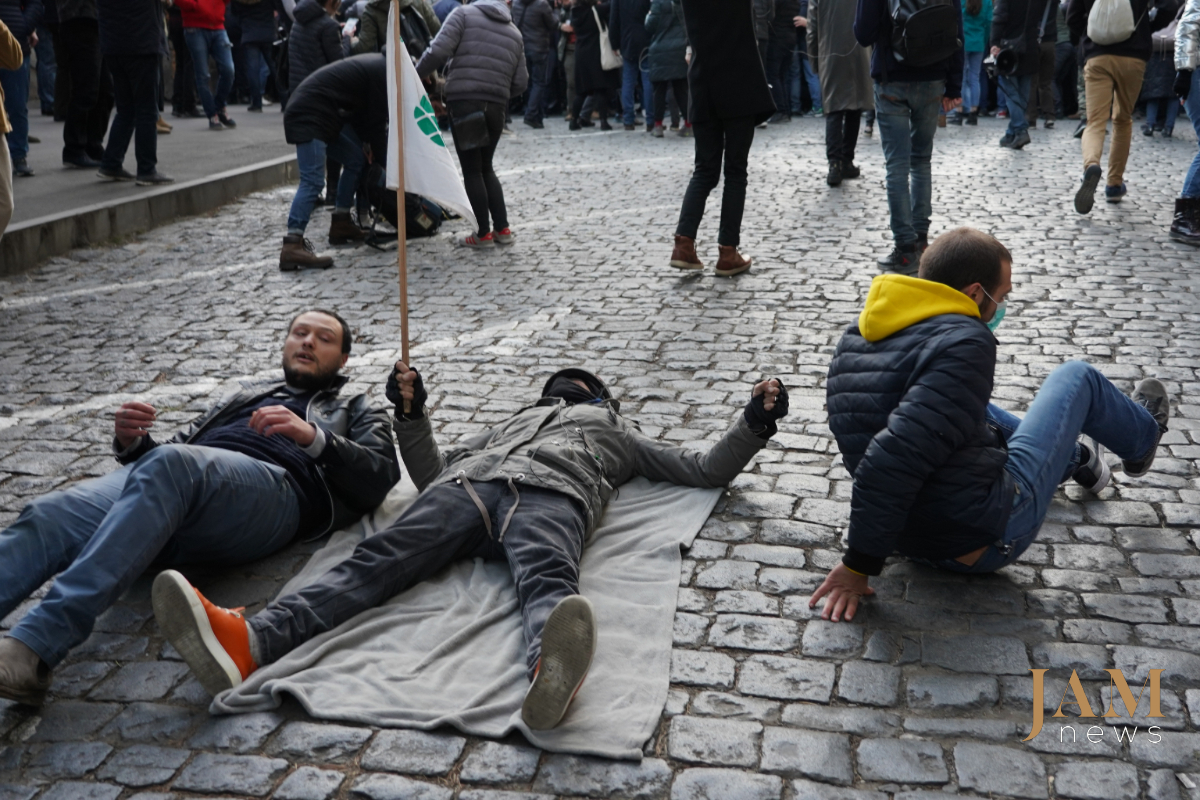 Cleaning service employees arrived at the parliament building to clear the area and clean up the remains of the destroyed tents. 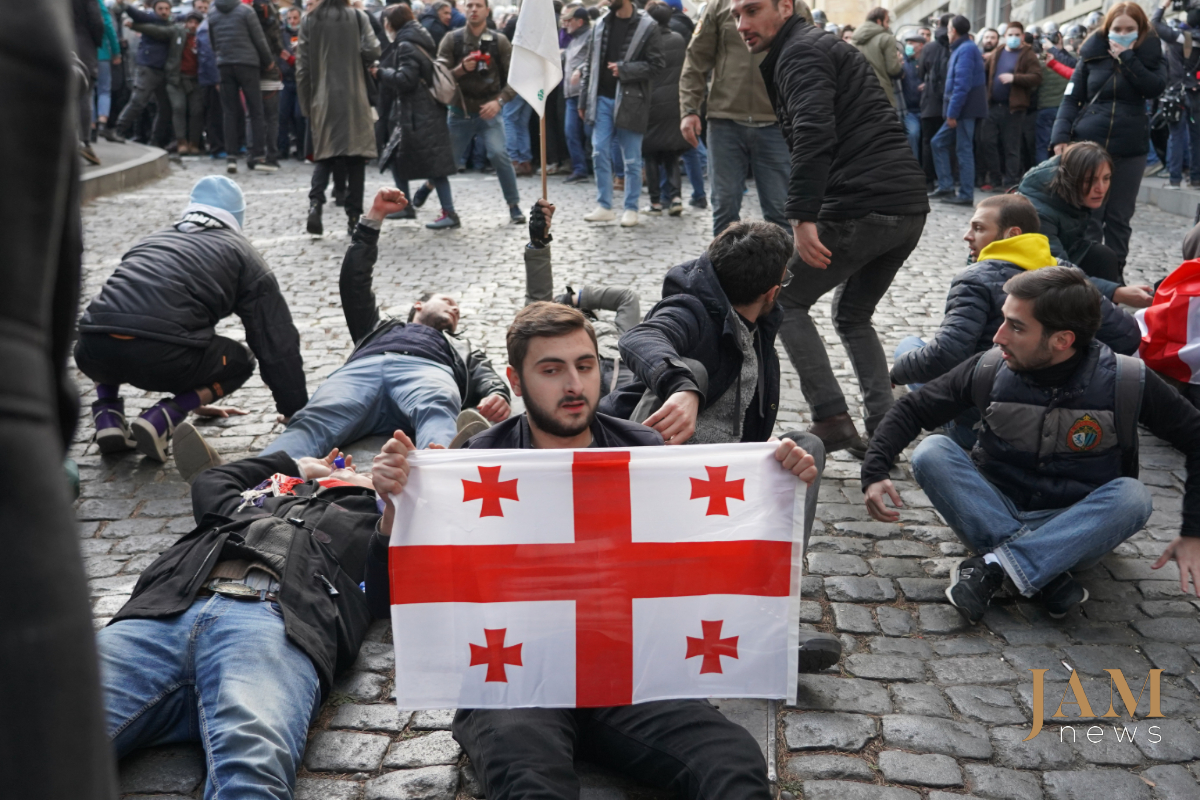 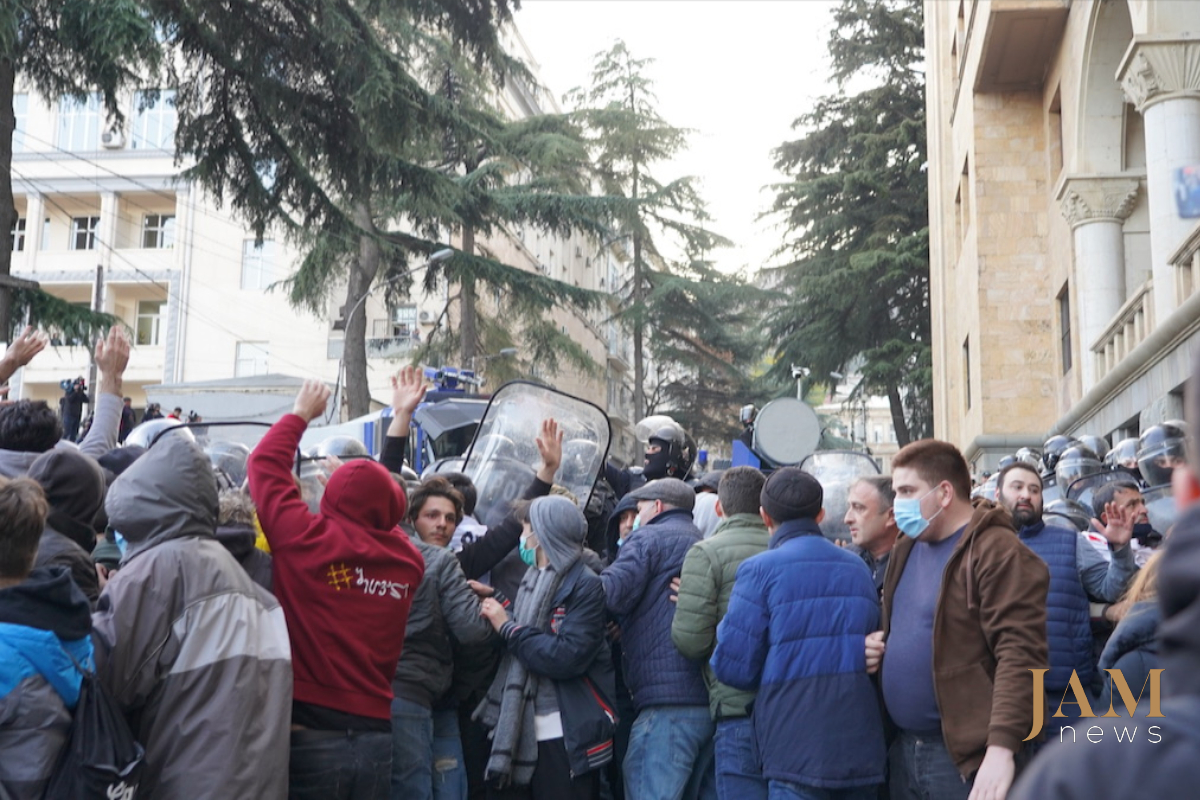 Police have employed tear gas in the effort to break up protests in front of the parliament in addition to the use of water canon. The area is covered in smoke. Dozens of activists have been detained, dragged away by police and driven away.

Director of the National Library Giorgi Kekelidze has appealed to the protesters to come to the library building (close to the parliament), where a hospital has been set up and where assistance will be provided to the wounded. 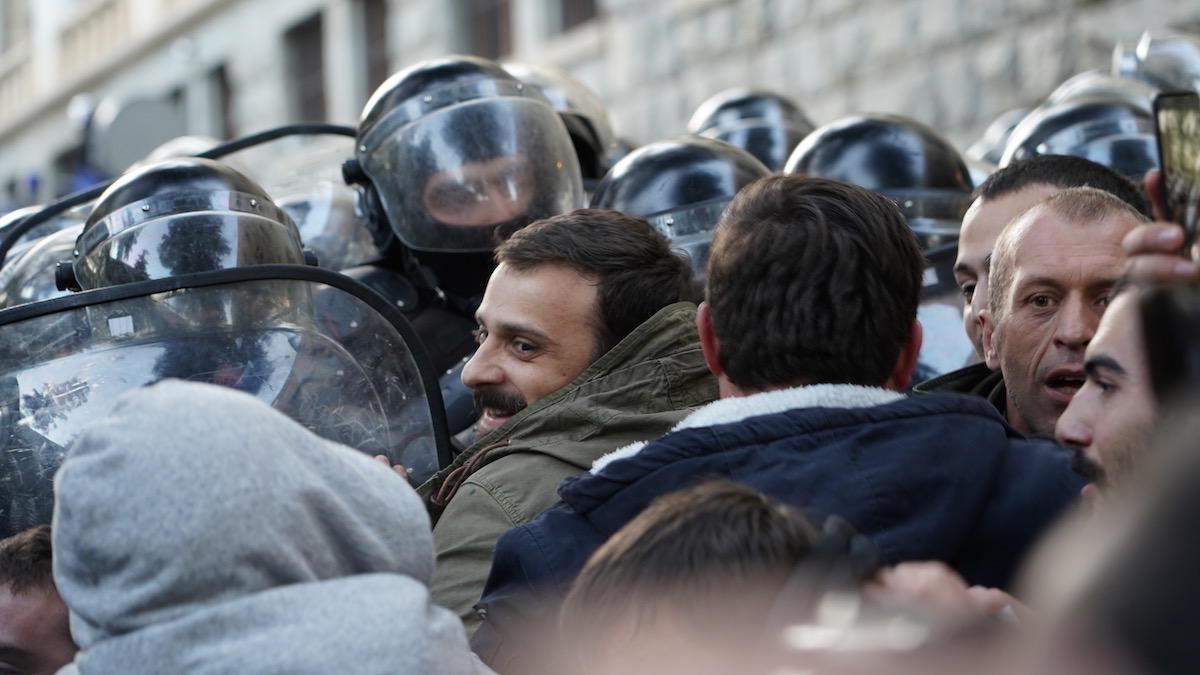 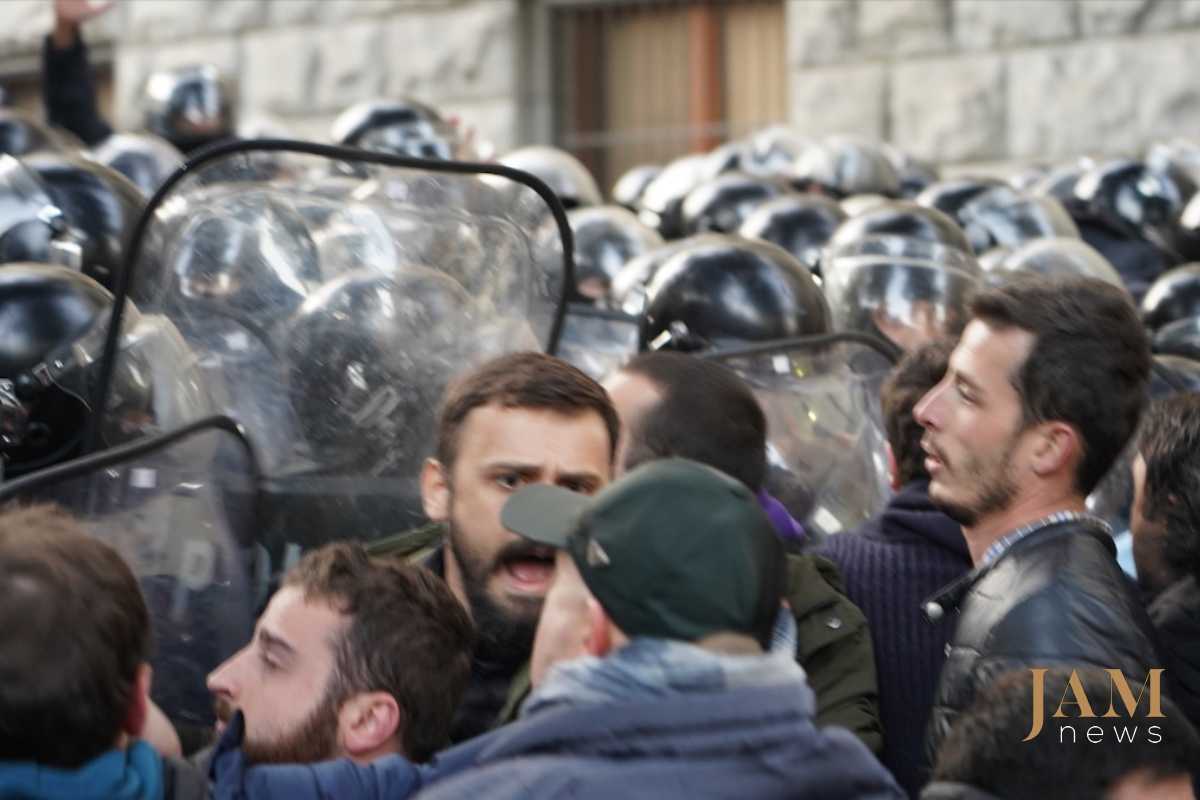 This is how the Georgian parliament looks from the upper entrance after protesters were driven out of the area, where water cannon and tear gas were used against them. 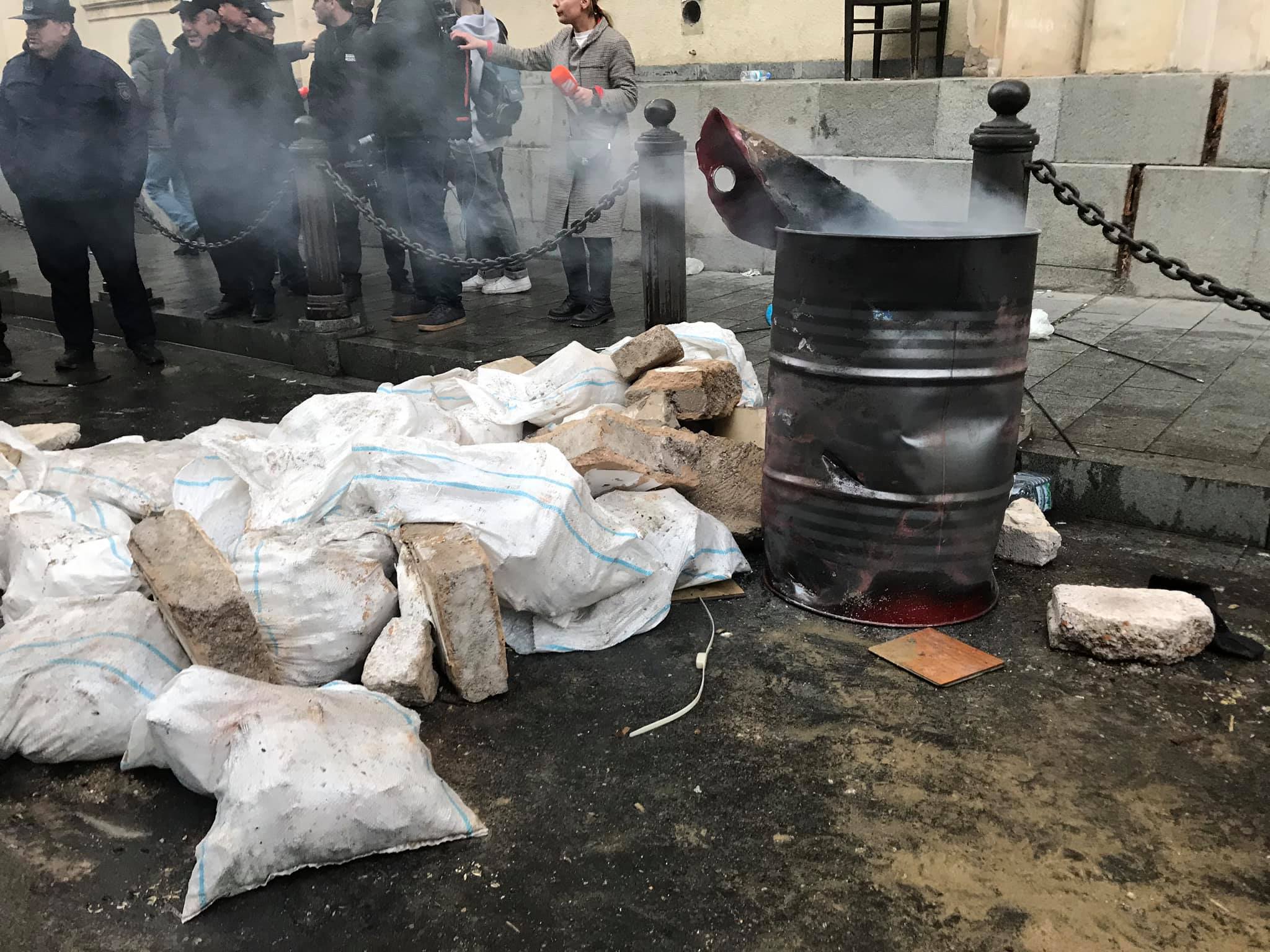 Riot police use water canons on protesters in Tbilisi

Riot police have started to break up the rally in front of the parliament building.

The protesters were given half an hour to clear the territory outside of the Georgian parliament. However, opposition leaders and activists refused to budge.

Riot police squads and police have been deployed outside of the parliament building in Tbilisi.

A dozen buses holding fully-equipped riot policemen wait nearby, and water canons are on standby too.

The protesters have started to form a human chain. They say they will continue to block the parliament despite everything.