More than 20 opposition parties have announced their participation in a large-scale protest in front of the parliament in Tbilisi.

Their slogan is: “All minus one – Bidzina must leave.”

‘Bidzina’ refers to the head of the ruling Georgian Dream party, Bidzina Ivanishvili, and who many call the country’s shadow puppeteer.

Later in the evening hundreds of protesters gathered in front of the main office of the ruling party, Georgian Dream, where they chanted “Go away” and whistled. The building is cordoned off by a police cordon and the lights are off.

The united opposition parties have put forward their requirements, of which the main is the adoption of a proportional electoral system and snap parliamentary elections.

• November 2019, protests pick up again in Tbilisi – what’s happening and why?

Protests in Tbilisi and several other Georgian cities began on November 14, when parliament failed to pass a constitutional amendment on electoral law.

Meanwhile, the protests in June 2019 came to an end to a large extent precisely because the leader of the ruling Georgian Dream party Bidzina Ivanishvili yielded to the demands of the opposition and personally promised to abandon the majoritarian system and adopt a proportional (party) parliamentary system with a zero electoral threshold.

The next parliamentary elections are scheduled for 2020.

Mostly it was majoritarian MPs who abstained from the ruling Georgian Dream party.

On the same day, opposition and civic activists announced the beginning of protests, pitched camp on Rustaveli Avenue and said they refused to leave until the demand would be satisfied.

On November 17, the united opposition announced a new rally of disobedience and called for a picket line around parliament. 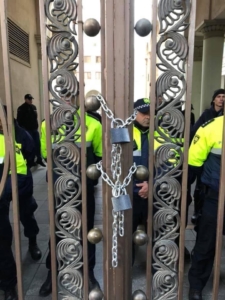 The leaders of the opposition European Georgia party hung locks on the gates of the Georgian parliament.

Several thousand activists gathered in front of the building, as well as along its perimeter with the intention of not letting MPs into parliament until the demands were satisfied.

“We will not leave and continue the full picketing of the parliament, because this body has lost its function. This night will show what we are capable of,” Grigol Vashadze, the leader of the former ruling United National Movement party said while speaking at the rally.

Vashadze was the main competitor of the current president of Georgia in the autumn of 2018.

He called on protesters to use “all the radical tools provided for by the constitution and legislation to return Georgia to its citizens.

The Ministry of Internal Affairs of Georgia issued a special statement on November 17. The Interior Ministry said it would “ensure the security and freedom of expression of citizens during meetings and demonstrations,” but warned of the need to comply with the law.

“Any violations, as well as attempts to storm the buildings or obstruct the work of the police will be immediately prevented,” the Georgian Interior Ministry said.

Direct reporting from the scene of the Pirveli TV company

Opposition leaders who speak at the rally emphasise that this is a peaceful rally and urge the police to prevent the recurrence of the events of the summer of 2019.

In June, thousands of people took to the streets in front of the parliament; gas and rubber bullets were used to disperse the protest, many people were injured, and a few lost their eyes.

The leader of the former ruling party, the United National Movement, Grigol Vashadze formulated the requirements of the combined 20 political forces in the following points:

• The resignation of the “criminal government”

• Release of the doctor Vazha Gaprindashvili from Tskhinvali prison.

Well-known Tbilisi doctor Vazha Gaprindashvili, recently detained by Russian servicemen in the Georgian-Ossetian conflict zone, was sentenced on November 15 to two months’ pre-trial detention in Tskhinvali, controlled by the Ossetian side.