Yerevan is host to a number of sculptures, the history and significance of which is known by few despite the fact that some of them are even located in the very heart of the city.

JAMnews looked into the background stories of several of these statues and sculptures.

Art historians and other experts whom we asked to assess the artistic value of these monuments knew little about their history. It was only after sending a request to the mayor’s office that we were able to receive a bit of information about where these sculptures came from and what they mean.

The sculpture ‘A girl from Van’ is located in downtown Yerevan and appeared in 1975.

Another, little-known work of the artist is called ‘Maternity’, and is on the city outskirts.

The next work comes from the collection of the Cafesjian Museum. ‘The Stork’ is located right next to the monument made in commemoration of 50 years of Soviet Armenia in the northern part of the city.

This piece is called ‘Alley of Benefactors’. The artist, Ferdinand Arakelyan, has many similar statues that are located throughout different parts of Yerevan and well-known to many, unlike this one.

This sculpture is also on the outskirts of Yerevan. The artist is sculptor Gevorg Mshetsi.

This sculpture is located by the fountains next to the House of Chamber Music and is titled ‘The Dance’. We were unable to find out either the name of the artist or the date the sculpture was installed.

An expert assessment on Yerevan sculptures

“Imagine that buildings are the clothing of a city, and sculptures are its jewelry. They’re built by sculptors, but they must be made and installed in cooperation with architects [who can determine] the size, the place, the color of the stone and so on. However, in Armenia sculptures often do not match their surroundings,” says architect Tigran Galstyan.

Galstyan also believes that a number of the sculptures erected in Soviet times are very similar to one another, so much so that they can even be confused.

There are, of course, modern sculptures in Yerevan as well, which have not been deprived of the attention of residents and tourists alike. They are more often works made of polyethylene, bottles, tires, and metal waste, which give an interesting and fresh new look to the city.

You can’t get too close or touch a majority of the statues and sculptures in Armenia. They are often guarded or fenced off.

“Why fence off monuments from the people by whom they are admired? Monuments are alive only when people come and hug them, touch them and photograph themselves with them – like in Rome, Amsterdam, Barcelona and elsewhere. I do not understand why we should fence off monuments like this and prevent people from touching them. For example, in Madrid people can lie on top of the Botero statue and climb on top of it to photograph themselves.

“How did they even think of the idea that monuments erected outside, under the open sky, might somehow be ruined by the touch of a human being?” 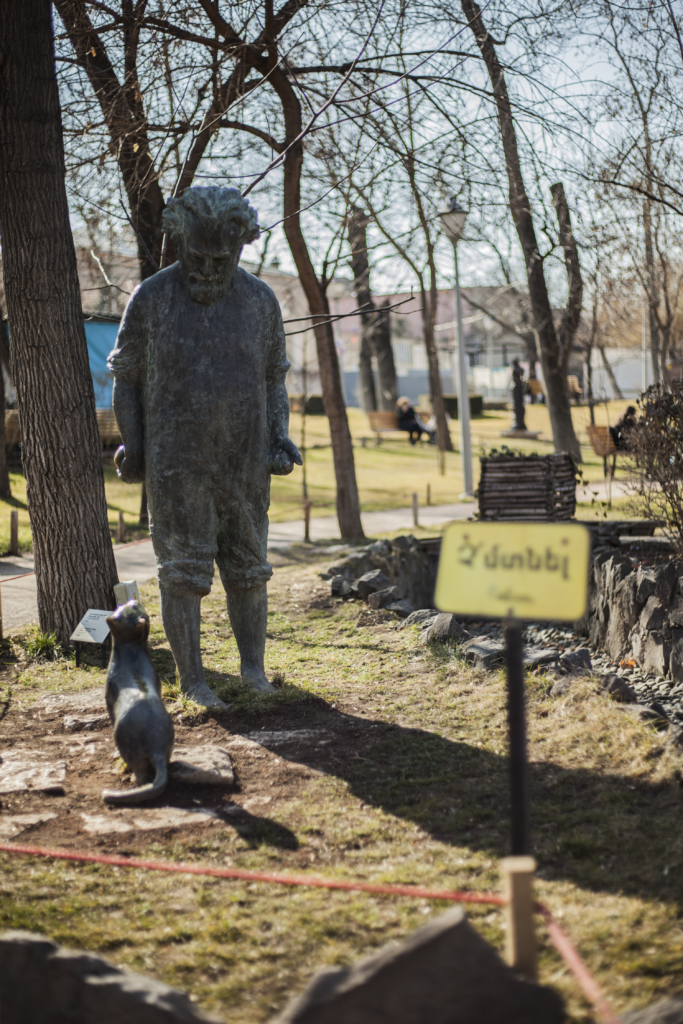 "We can do everything" - stories of labor migrants in Abkhazia