Tbilisi protests: Why were people dancing in front of the parliament?

According to TV channel Rustavi-2, White Noise activists in Tbilisi have promised to resume protests on 13 May near the parliament building in Tbilisi.

The leader of the movement, Beka Tsikarishvili, stated that they want to ‘keep the situation from escalating’.

So, what’s happening in Tbilisi?

e are dancing together and we are fighting for our freedom.”

This is the slogan under which several thousand young people got together near the parliament building in Tbilisi at 3 o’clock on 12 May, demanding the resignation of PM Kvirikashvili and the minister of internal affairs.

This was in reaction to a drug raid conducted by police in the early hours of 12 May on several nightclubs in Tbilisi.

A DJ came out in the evening to the demonstration, which was mostly comprised of the youth, and played electronic music. The demonstration continued with music and dancing. Towards 11 o’clock people set up tents despite the strong wind and rain, and more and more people showed up at the spot.

The next day was quiet. The tents from the night before were taken down by the police. During a verbal run-in with the police, three people had been detained for disturbing public order.

On 12 May, at about one o’clock in the morning, special units wearing masks raided two popular nightclubs. According to a statement from the Ministry of Internal Affairs, the purpose of the operation was to arrest drug dealers. The Rustavi-2 film below shows how people were taken out of the club by force. Some people had their clothing ripped, and live footage captured how several people were detained. Several of the founders of Bassiani, Tbilisi’s most popular nightclub, were also detained. The club itself was closed and sealed off.

Witnesses in Bassiani told journalists that the police had acted with excessive force and planted drugs in the club.

The Ministry of Internal Affairs released a statement saying that: “An investigation had been conducted over the course of three months to uncover drug dealing activities … and during the operation on 12 May necessary measures were taken in Tbilisi clubs which resulted in the arrest of eight drug dealers.”

The Ministry of Internal Affairs believes that the drug dealers who were arrested are closely connected to the clubs.

Scenes from an operation were distributed by the press service of Georgia’s Ministry of Internal Affairs. In the video, one can see test-purchases of drugs in the Bassiani and Cafe Gallery clubs, as well as sales conducted on the streets in downtown Tbilisi.

The anti-narcotics raid, the ministry says, is connected to the ‘tragic cases of the death of a number of youth’ that took place in Tbilisi at the beginning of May. Five people died and 10 were hospitalised with severe intoxication after using an unknown drug.

“It is notable that these cases took place after visiting clubs. Moreover, there has been a significant rise in the number of ambulance calls to clubs,” the ministry said.

The minister also emphasised that ‘it supports the development of club culture in Georgia’, that it does not intend to shut down clubs and ‘it is at the discretion of the owners of the clubs to decide how the clubs will proceed further’.

However, many questions about the operation remains unanswered. Georgia’s ombudsman Nino Lomjaria observed the events. She said those suspected of drug dealing had been arrested not in the clubs but outside and even before the operation had begun. For that reason, the ombudsman demands explanations from the Ministry of Internal Affairs as to why the armed forces even entered the premises of the clubs.

In response to the police raid in Bassiani and Cafe Gallery, representatives of the White Noise organisation, which wants to see a liberalisation of Georgia’s drug policy, organised a large-scale protest in the centre of Tbilisi.

Activists say that the actions of the authorities were a ‘demonstration of power’, an ‘attack against club life in the capital’ and ‘a return to the USSR’.

In the first half of the day on 12 May, the main demand of the demonstrators was the resignation of Georgia’s Ministry of Internal Affairs Giorgi Gvakharia and punishment of the police officers who used force against clubbers. The demonstrators also demanded that Giorgi Kvirikashvili speak before 10 PM and to give an assessment of the events.

“This is no longer a demonstration against the drug policy. This is a demonstration to [prevent us from] living in a country like North Korea or Russia, where the main thing is the system rather than people,” said one of the demonstrators in a televised interview.

“Yesterday I could have been in the club. I go to Bassiani often. After a long work week, it’s a great way to de-stress. Who am I harming if I drink a bit and dance? Why should the police have to break in and chase me out onto the street?” said twenty-seven-year-old Nino.

Thirty-nine-year-old Irakli said: “That’s how they operate in Russia – they attack people in nightclubs and detain them at protests. If we don’t raise our voice now, we will end up with the same authoritarian regime as Russia.” 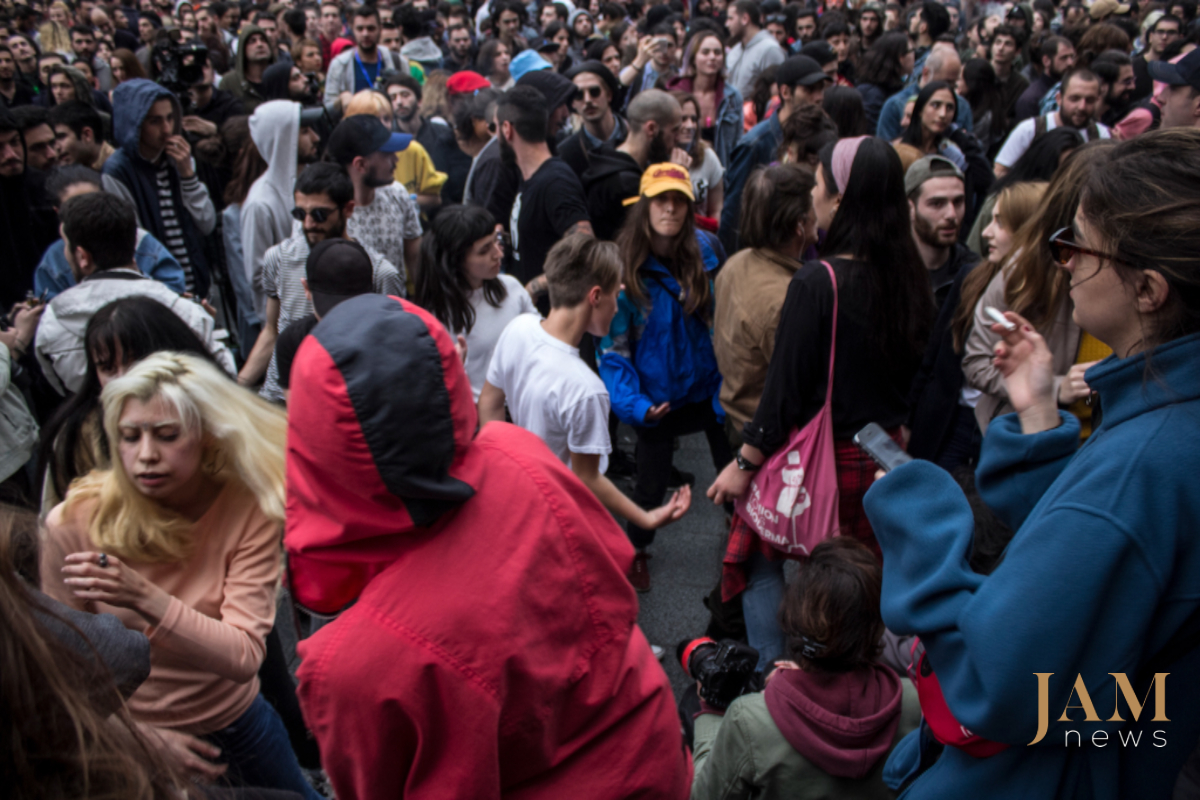 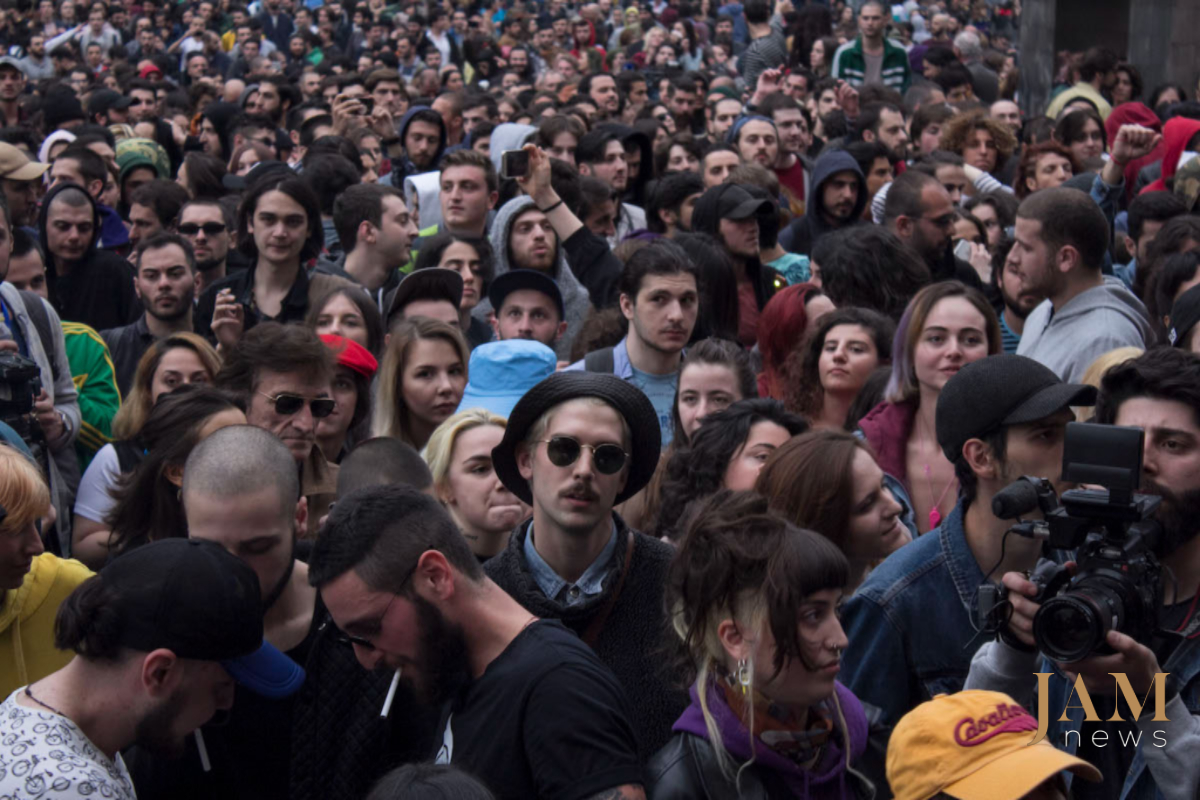 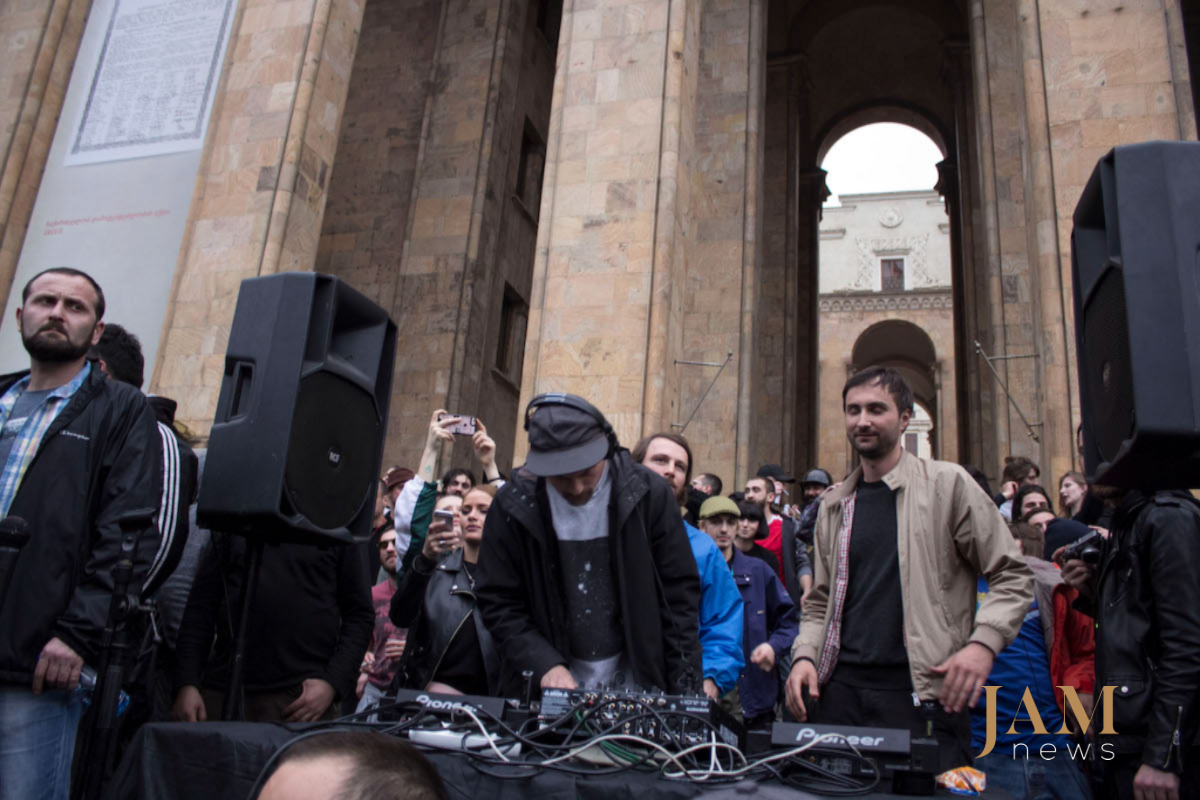 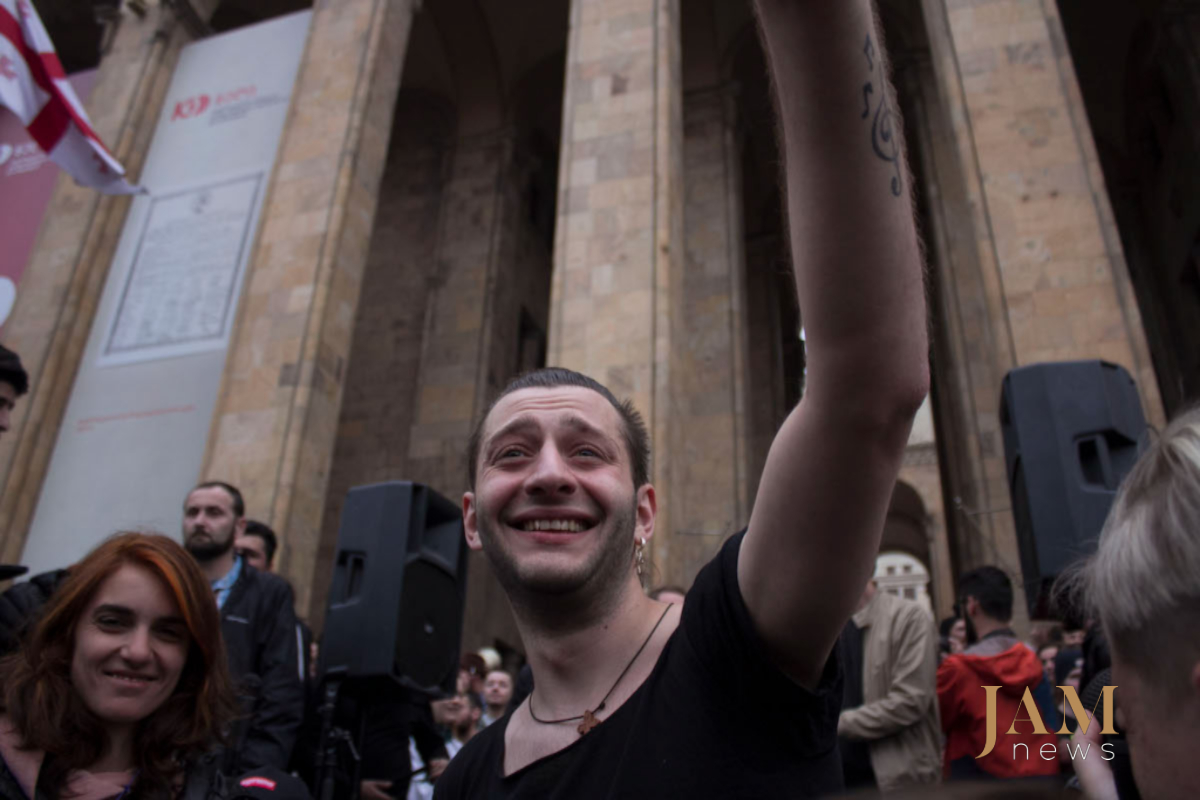 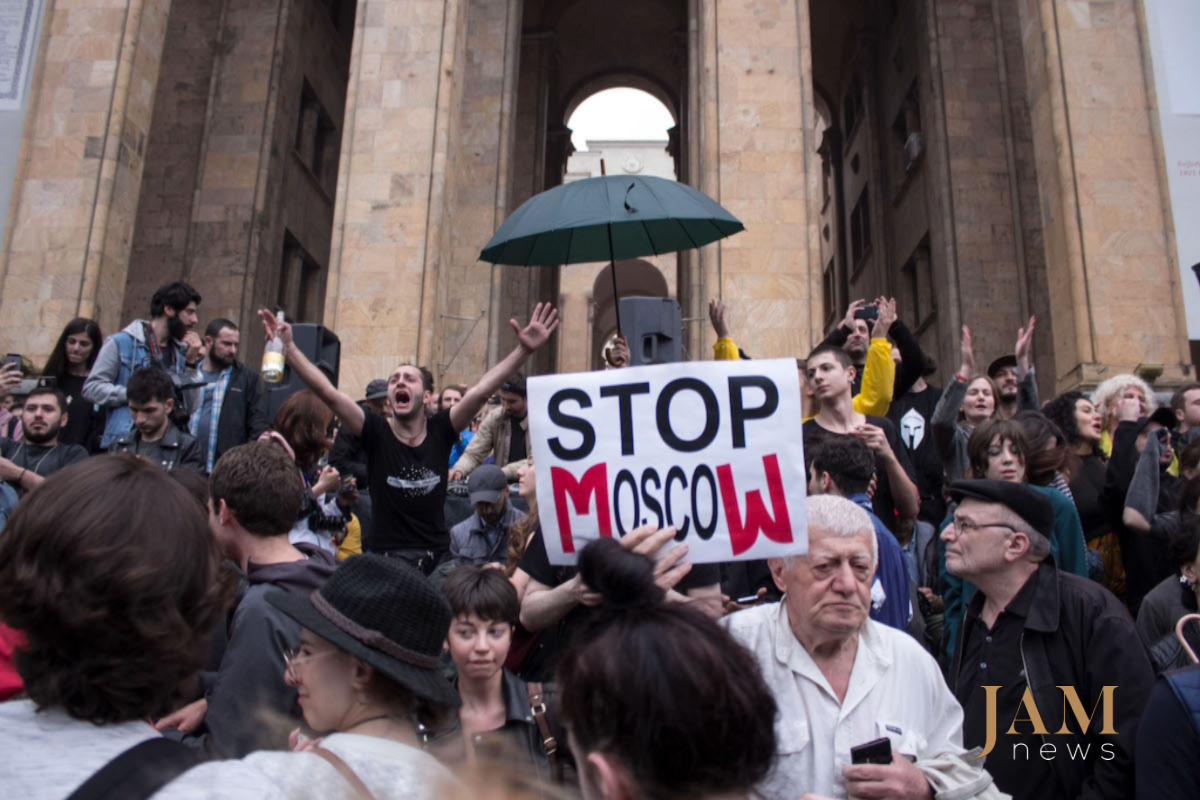 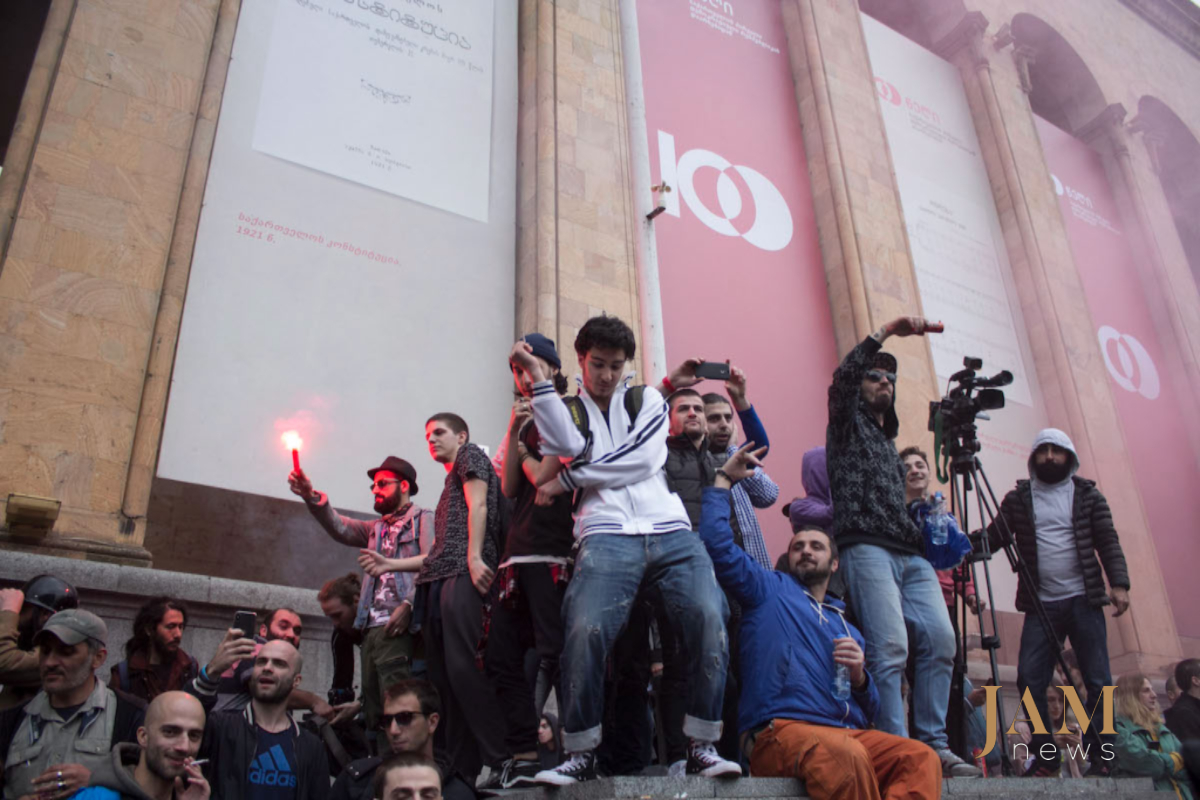 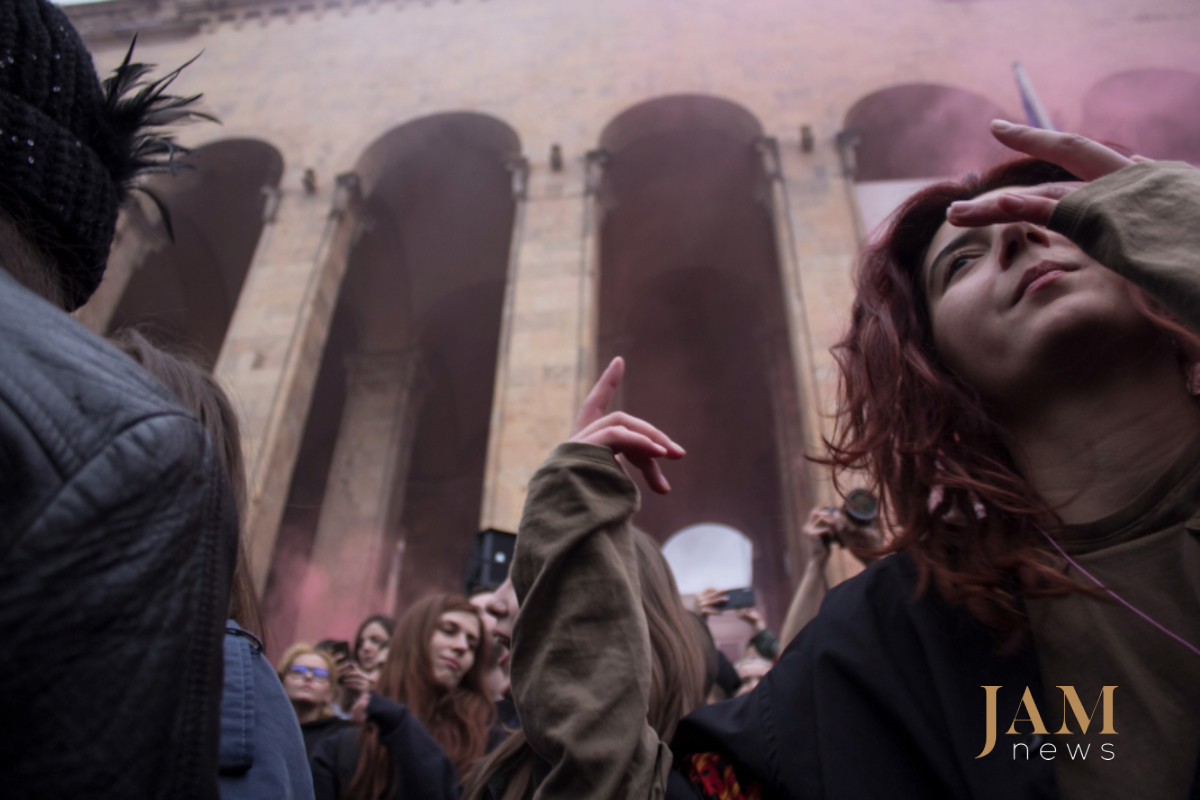 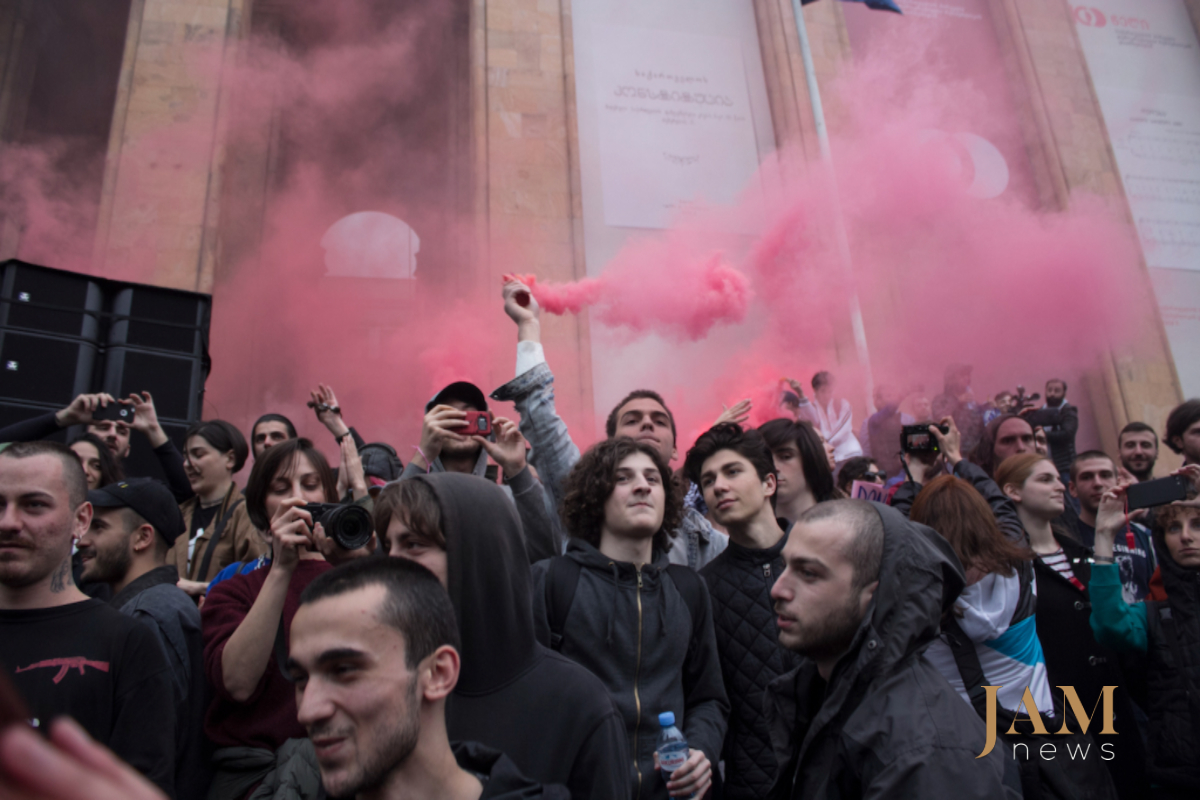 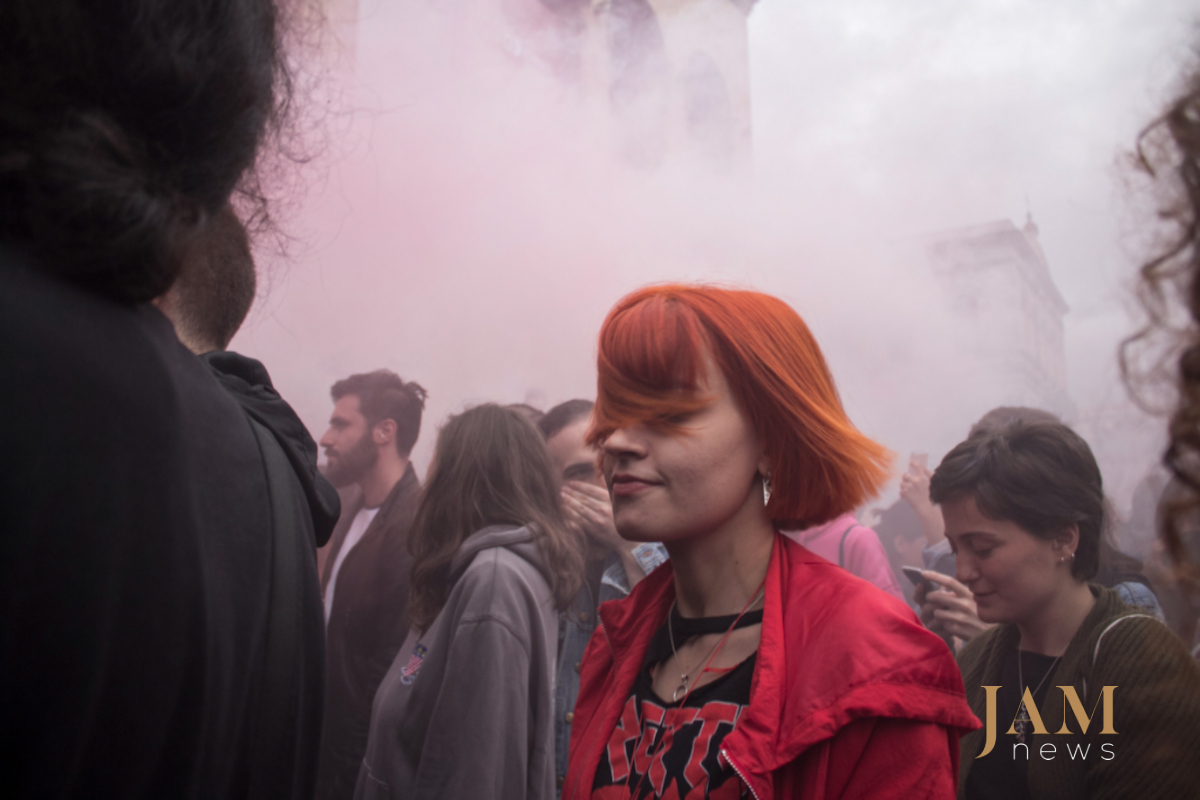 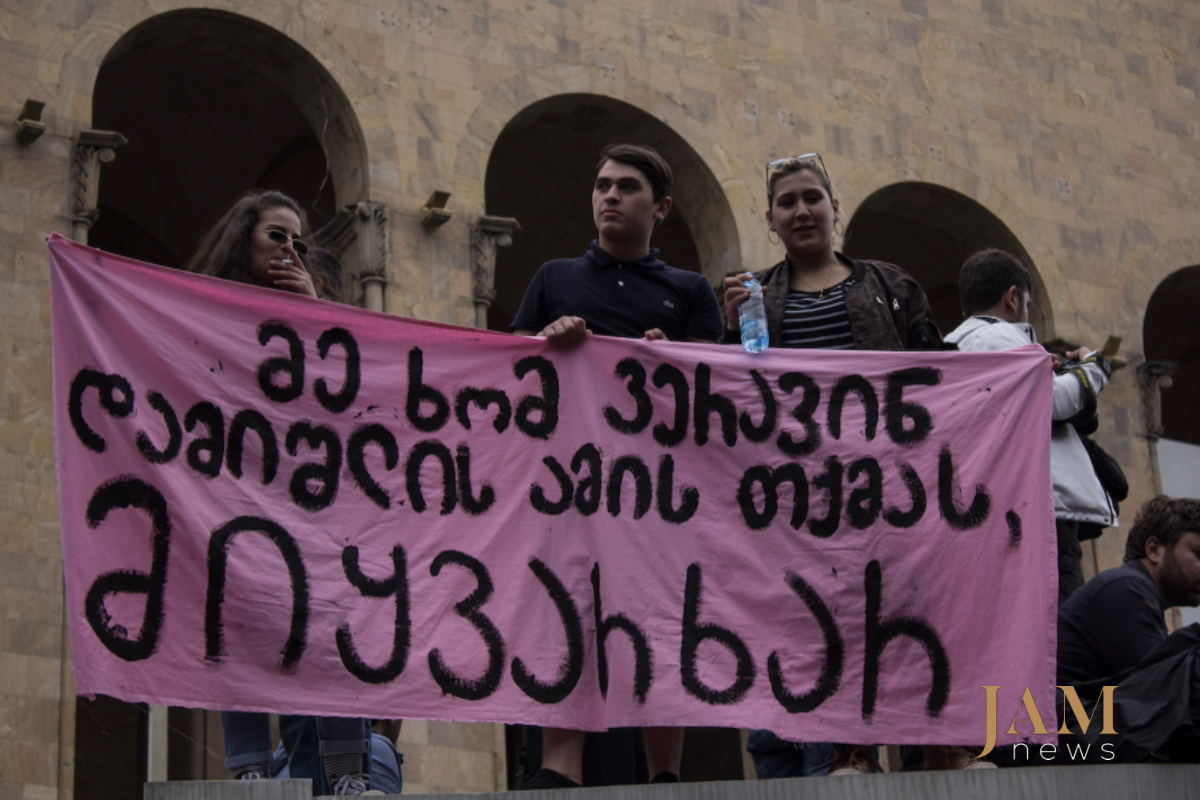 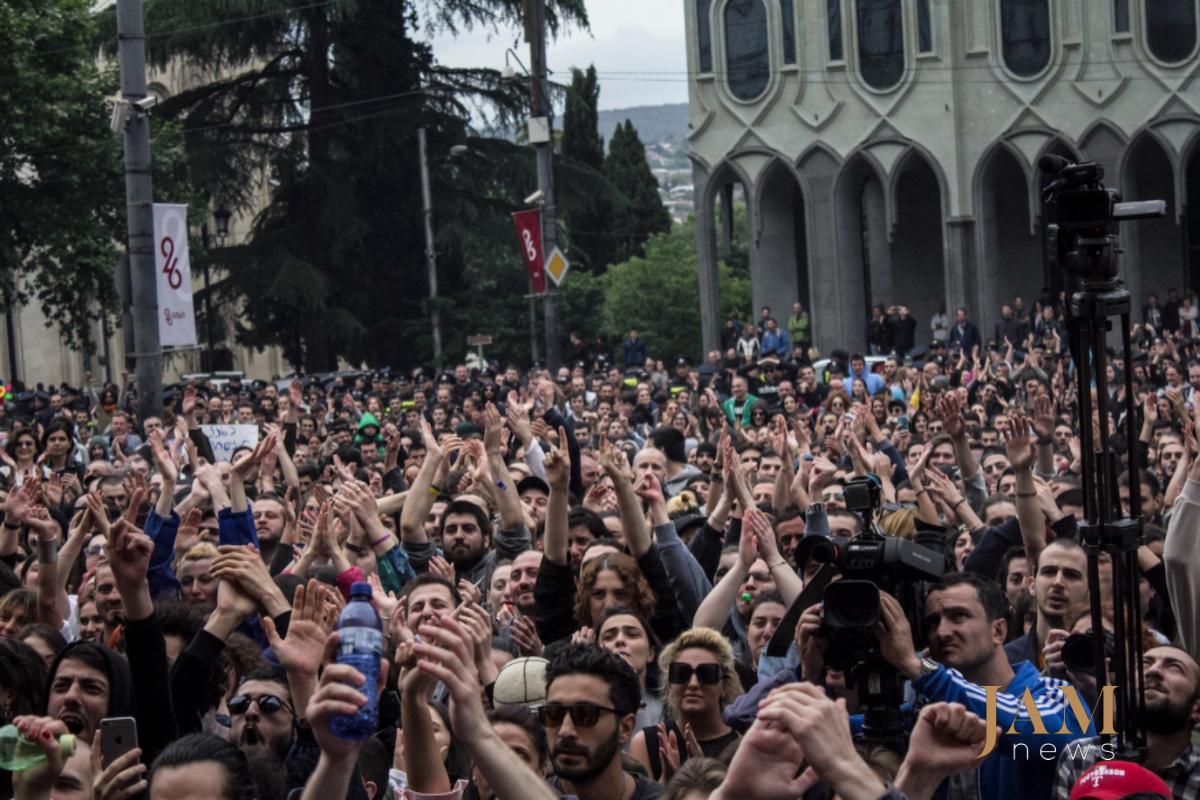 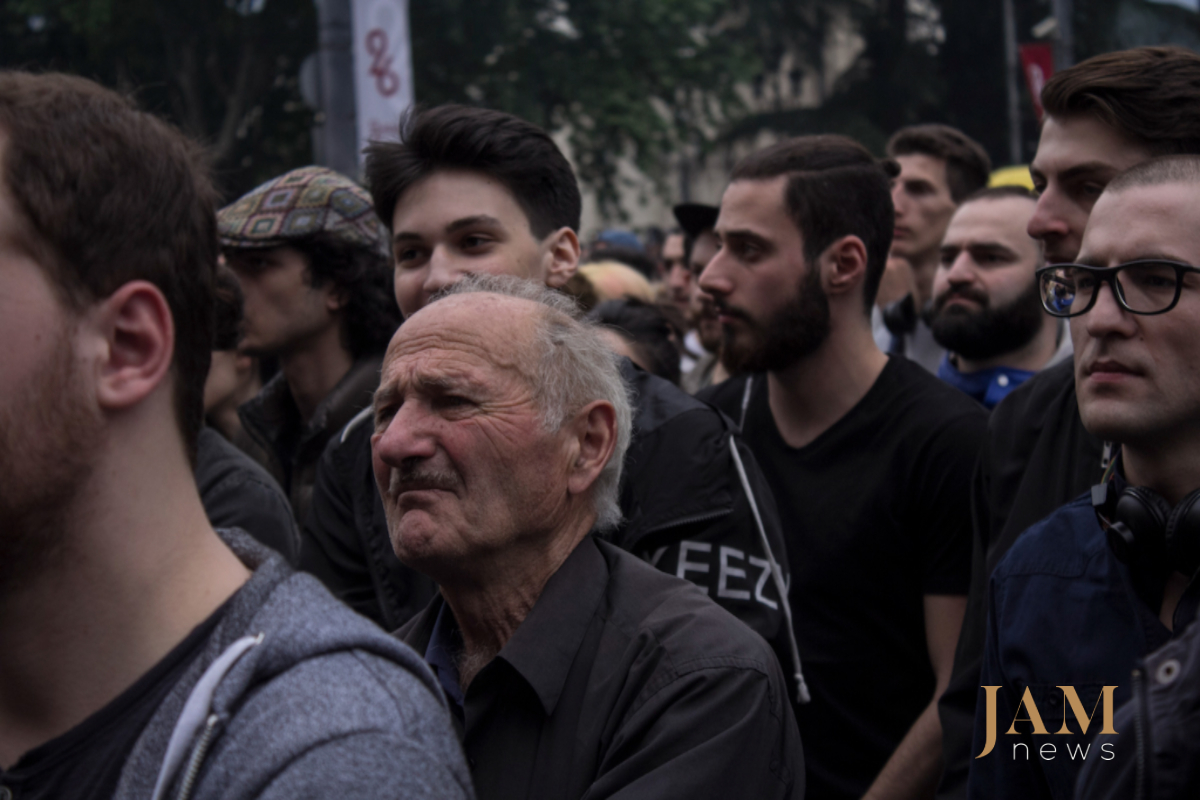 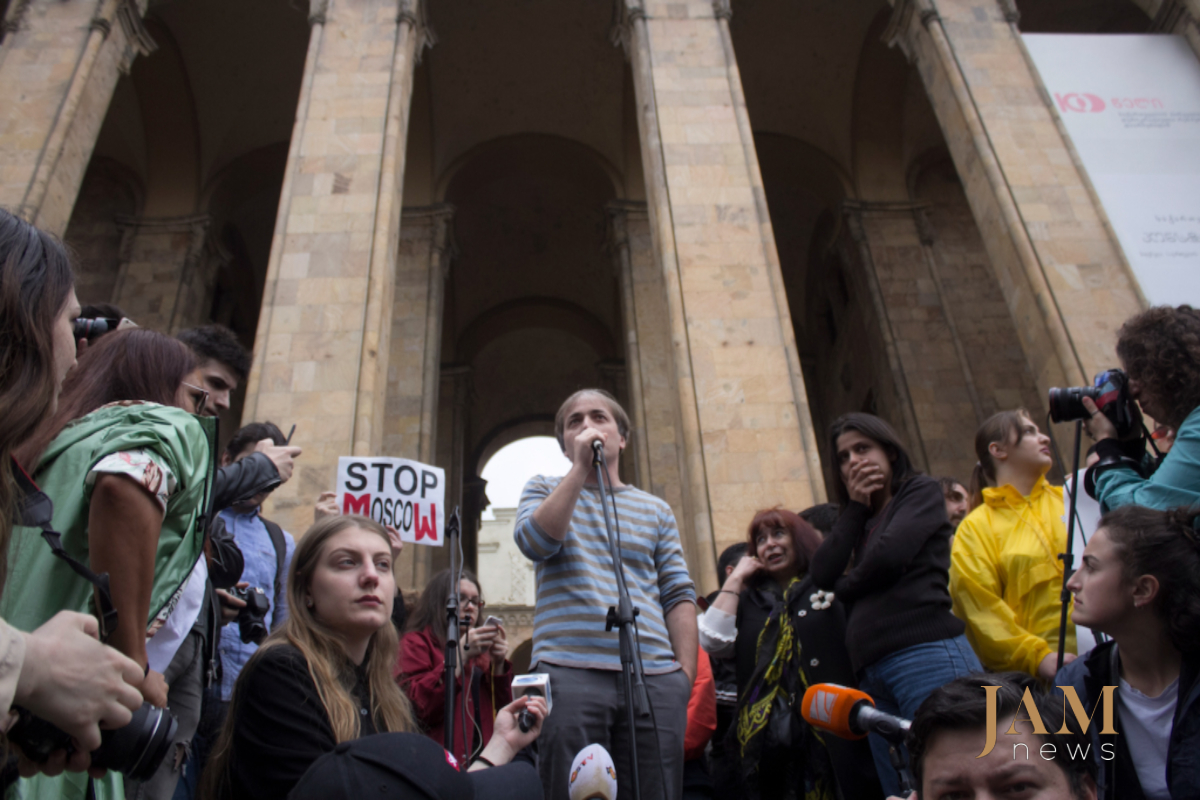 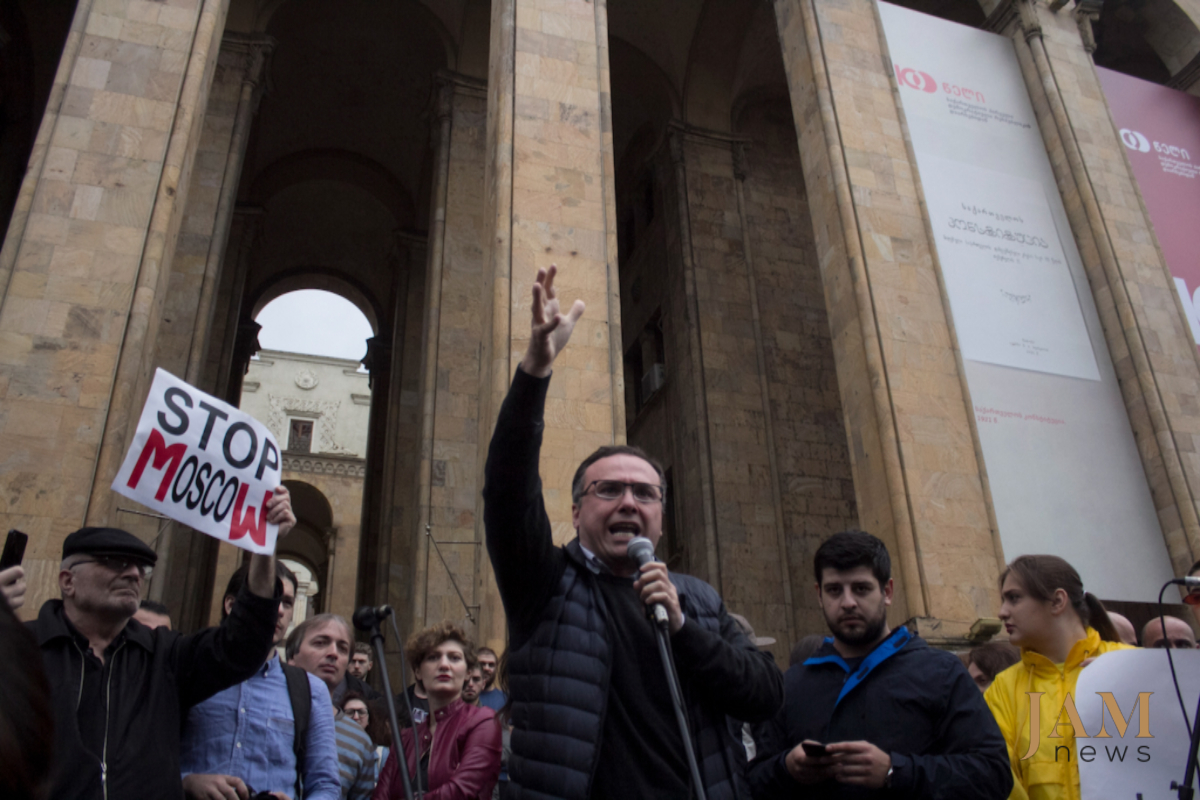 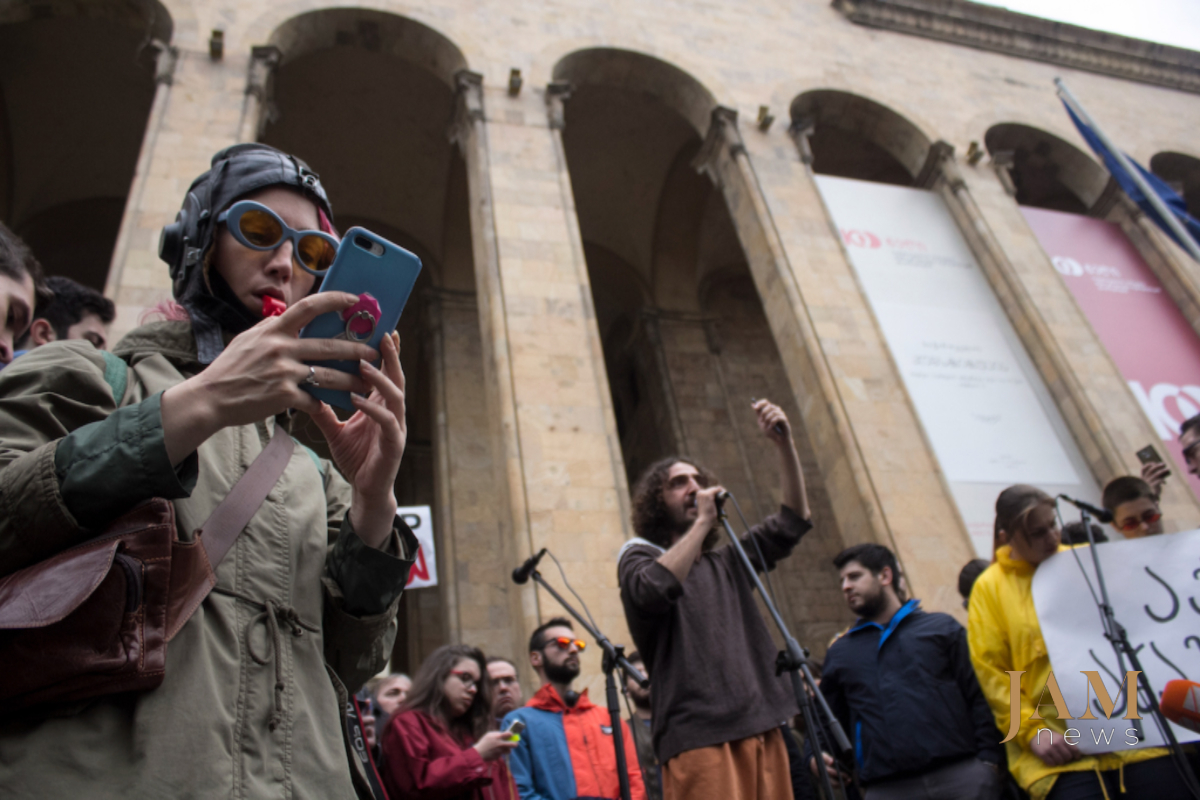 The furies of hell or progressive youth?

Many have ambiguous feelings about the protests.

Facebook comments show that many think of the youth who are participating in the protests as ‘drug-addicts supported by drug-dealers‘.

Many were annoyed that protestors danced on the 9 April memorial. This place holds significance for many: on 9 April 1989, the Soviet Army harshly dealt with a thousands-large protest in Tbilisi demanding Georgian independence. Tanks used poisonous gas against protestors, and 21 people died.

“Did the youth of 9 April fight for THIS? How can they defile the memorial like this!”

However, the liberal segment of society supports the protests and believes that the system is fighting against independent youth with Soviet and Putin-esque methods.

The political side of the issue

•  Imprisoned for drugs: still an easy way to deal with opponents in Georgia. The story of rap-duet Birja-Mafia

Liberals in Georgian society and many human rights activists see the anti-drug raids as the police and state’s reaction against activists who demand the legalisation and decriminalisation of several kinds of drugs.

The discussion about drug liberalisation in Georgia has been ongoing for several years now. Georgia has a very strict drug policy, and public organisations and activists have demanded for many years that it be changed. The Georgian authorities are often accused of using the drug policy as a weapon against the opposition, and as a way of propping up the budget. Experts say that this is the reason why Georgia is not rushing to liberalise the legislation.

Many even connect the operation to former PM Bidzina Ivanishvili’s return to politics, who is known in Georgia as a ‘shadow’ ruler.

In 2012, he and his coalition defeated Mikheil Saakashvili’s United National Movement and came to power in the country. Ivanishvili then became Prime Minister, but after some time he stepped down, even though many in Georgia believe that he continues to informally govern the country.

Ivanishvili recently returned to politics on 11 May as the chair of the Georgian Dream party.

Some believe that the main aim of the police raid was not to counteract the activities of drug dealers but to discredit Tbilisi Mayor Kakha Kaladze, who has recently become a very popular figure and who supports an active nightlife in Tbilisi. He is also a supporter of liberalising Georgia’s drug policy.

Kaladze made a statement about the operation a day after the raids. He was the first government figure to make a public statement.

“The main values for our team are people and their lives,” Kaladze said. “We will try as best we can to develop the night-time economy and club life. However, our brothers and sisters are dying and I am sure that young people who are in front of the parliament building will now stand with us in the fight against drug dealers. I ask you to fight with us,” the mayor of Tbilisi said.

He added that the demands of the White Noise activists regarding the resignation of PM Giorgi Kvirikashvili ‘were made emotionally’.

Kaladze is actively promoting his project to develop Tbilisi’s night-time economy. The mayor promises to turn the Georgian capital ‘into a city that never sleeps’, drawing from the examples of New York, Paris, Barcelona, Berlin and London.

Kaladze does not believe that yesterday’s operation can affect his ambitious plans or harm Tbilisi’s club scene.

“There are speculations about this ‘strike against the night time economy’ and the development of the economy with which I do not agree. I do not agree with the idea that this is a strike against club music and the genre. I state with complete responsibility that the night-time economy will continue to develop and that the club scene which is very successful will further be improved upon. I will try as hard as I can to cooperate and support,” he stated.

Answering journalists’ questions as to whether Kaladze believes that the special forces’s raid on the nightclubs was acceptable, Kaladze said that ‘this form may be a subject of polemics’.

Over the past five years, underground clubs and nightlife have become more and more popular. Bassiani is one of the most popular and largest clubs in the city and is often found among the ratings of Europe’s best clubs, on par with clubs in Berlin.

Kakha Kaladze has stated on multiple occasions that there is enormous tourist potential in clubs.

A Facebook video from the protests has surfaced on the fan page of the underground music group Boiler Room.

“The children of Tbilisi do not intend to remain silent,” the video claimed. It should be noted that the White Noise demonstration was covered by the world’s leading media, including BBC and Reuters.