What's changing in Azerbaijan – society, the gov’t or the opposition?

The suppression of an opposition rally, the violent dispersal of a feminist march against violence, an espionage scandal, the abolition of the Ministry of Taxes, the resignation of several high-ranking officials – all this took place in Azerbaijan in just five days.

How are all these events connected and what do they mean?

The opposition and the authorities: someone’s cunning plan or ‘seasonal shakeout’?

“For an hour I circled the streets, trying to understand where the rally was taking place.  I saw groups of people, some were occasionally taken away by the police. But no posters, no slogans, Then I asked someone, and they told me that this was the rally.  And all these people are not onlookers, as I thought, but the opposition”, says a freelance correspondent for JAMnews.

The National Council of Democratic Forces (NCDF), which includes several opposition parties and activists, decided to hold an unauthorized rally in the city center on October 19.

They were angry that recently the authorities had allowed the opposition to gather only in the village of Lokbatan, 20 kilometers from the city.

The slogans at the rally were (would have been, if the participants had had the chance to put up the placards) the usual ones – freedom for political prisoners, democratic elections, the fight against corruption and general dissatisfaction with the authorities.

On the day of the rally, the entire square in front of the station where it was planned to be held and the surrounding neighborhoods were cordoned off by the police.  Nearby metro stations were shut down and mobile internet in the area was effectively turned off. ATMs, banking systems, pos-terminals stopped working.

As a result, the rally was dispersed very quickly and, according to many – in too tough a manner.  Opposition leaders complained of police beatings. About 100 people were detained, many were immediately released, but some received sentences (from 30 to 50 days).

Experts and others interested in politics in Azerbaijan are asking: what does the determination of the opposition and the violent reactions of the authorities mean about what’s taking place in the country’s political situation?  And what could it lead to?

The opposition Republican Alternative party is not part of the NCDF and had nothing to do with the rally.  ReAl member Natiq Jafarli believes that the main purpose of the rally was to influence the authorities and obtain permission from them to conduct rallies in “normal places in the city”.  Moreover, in his opinion, the authorities may make concessions.

This is what Jafarli commented on the recent police crackdown:

“There was no need for this. Apparently, those who gave this order sought to create chaos or the appearance of chaos in the country.  And the authorities must find out who it was.”

JAMnews political commentator Shahin Rzayev believes that the opposition generally becomes more active in the fall and spring – simply because it is too cold in winter, and people are on vacation in summer.

That is, Rzayev says, the rally of the NCDF does not indicate any new sort of activity, however he agrees with Jafarli in that perhaps some political forces are interested in political destabilization.

“We have pathological stability, and perhaps there are influential people in the country who are not against having things shaken up.  Rallies are the right tool for this.”

The first victories of Azerbaijani feminism

A square in the center of Baku near the monument to the poetess Natavan.  About a dozen young people surrounded by about two dozen police officers. A girl in the very center of the crowd, gesturing desperately, is trying to explain something to an elderly policeman who has a very tired look, and his questions are not heard.

“We are all the organizers! We are all in charge”, the girl shouts. 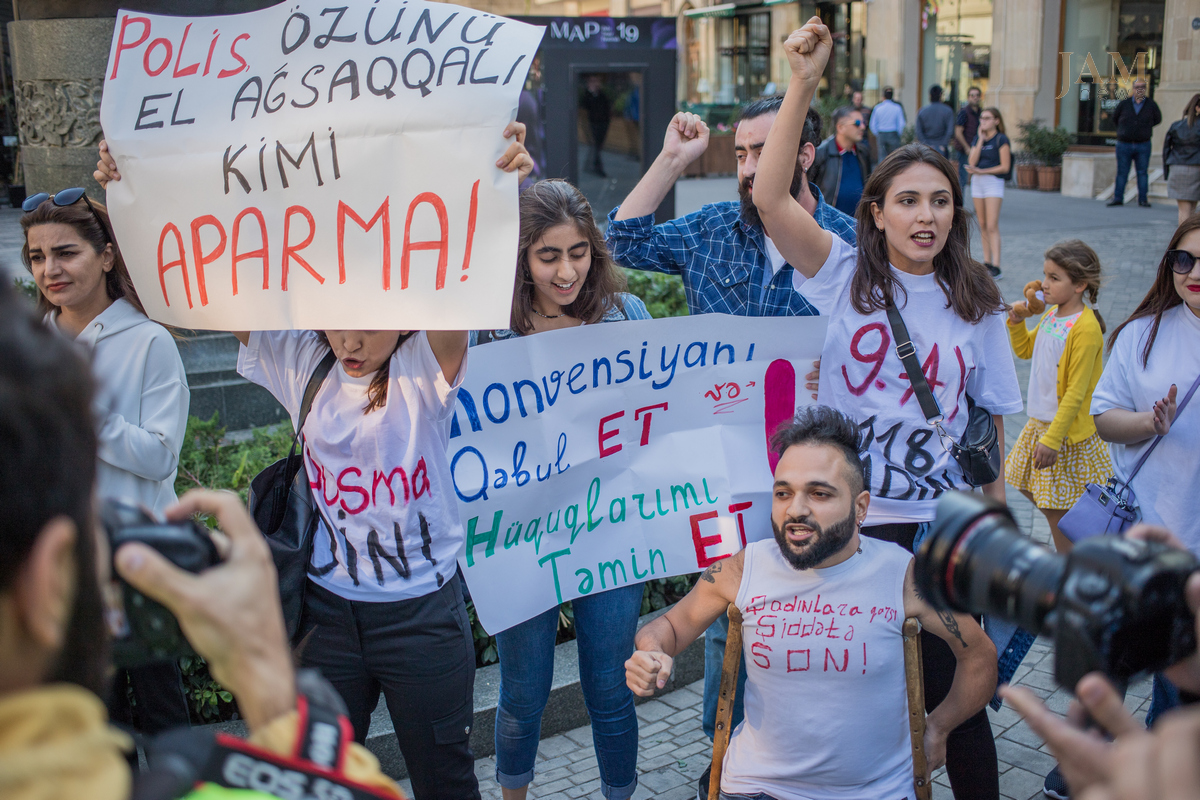 Indeed, Azerbaijani feminists do not have an official leader.  This movement has existed for only a few years and is based on common ideas, an idea, and not on the charisma of a leader.

And, despite the disadvantages of this situation, the movement successfully fulfills its main task – it draws attention to the problem of domestic violence and gender inequality.  On March 8, a public “debut” of Azerbaijani feminism took place – a peaceful march not authorized by the authorities and dispersed by the police.

On October 20, several dozen activists decided to re-organize a peaceful procession in the center of the capital and demand the state sign and ratify the Istanbul Convention, an international agreement of the Council of Europe against domestic violence and violence against women.

The city authorities refused, but the procession still took place.  Activists walked from the monument to the poetess Natavan to the Cafe Colorit, just 700 meters.  But instead of the 15 minutes that this route normally takes, the procession took two hours thanks to the intervention of the police.  There were at least three times as many police officers as protesters, and they seemed to specifically demonstrate what “violence against a woman” means: they dragged girls on the ground, twisted their arms.

But people on the streets were vividly interested: some looked at the protesters with condemnation, some smiled at them.  Two boys of about ten came up to ask, “Are these people Azerbaijanis?” and “What do they want?”

For the most part, Azerbaijani society was shocked that politics “spoiled the weekend”.  Stormy discussions began on social media and even on the streets. The main positions were as follows:

1. The protesters are fools and loafers, and prevent me from enjoying my leisure time. The West is paying them.

Former Foreign Minister Tofig Zulfugarov thought the police were even too soft.  And many agreed with him.

“This feminist march is just a showpiece and self-PR”

“I don’t understand why everyone is so defending the opposition if they organized a rally without the permission of the executive branch? In general, a rally is chaos, and chaos is bad. Do you want it to be like in Ukraine?  You’ll go out for bread and won’t know whether you will return home or not, because the level of crime is rising.”

“If someone doesn’t like it, let them leave. It is naive to believe that a rally will change something. Why, because of such “eternally dissatisfied” people, should others have to be left without transportation?”

Three middle-aged men, on the day of the feminist procession, loudly argued on the street that “it is not clear what these women want, no one is touching them.”  Sexist comments appeared on the net that all these girls are “spoiled” and “do not know how to behave.” And that the procession is a paid performance. The opposition rally was also declared paid.

The pro-government media took the same position.  It came to open accusations against the West, which these media even backed up with a recording of a telephone conversation between a European diplomat and an opposition activist (she talked about the situation in the country and the rally rally).  Soon, these records were deleted from everywhere.

2. The other side looks more favorably upon the protesters:

“What a blessing that our society wakes up!  Shame on the police!”

“What happened at the rally disgraced Azerbaijan all over the world”

“After watching the video from the rally against violence, I realized that not all of our youth are bogged down in degradation!  I am very, very happy and full of hope! Well done, boys and girls!”

For so many on social media, the main antagonist of the past weekend was the police. Some published their photos and personal data so that everyone “can know the enemy in person.” 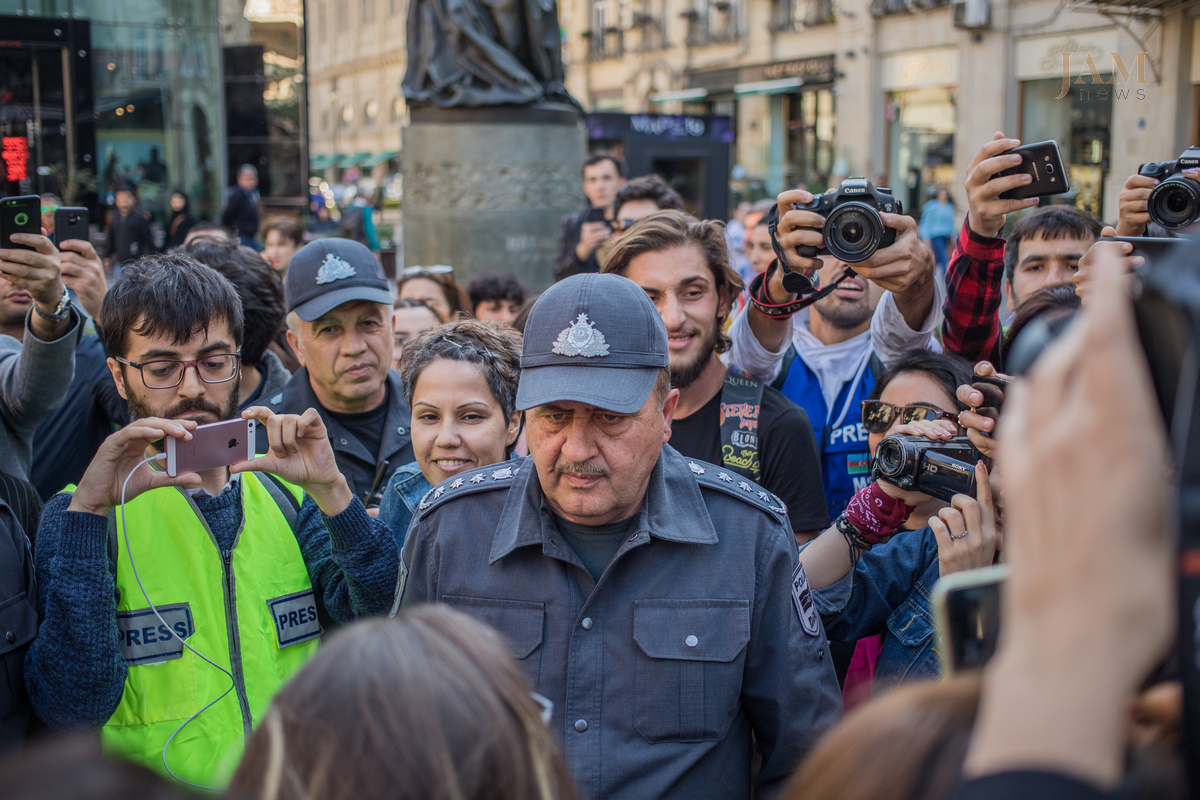 The European Union and other international organizations criticized the Azerbaijani authorities, demanded the release of those arrested, and noted the failure to adopt the Istanbul Convention.

Throughout this, almost no one paid attention to the resignation of two deputy prime ministers on 21 October.

One of them, Hajibala Abutalybov, was the head of the executive branch of Baku for almost 20 years and earned himself the reputation of an eccentric who performs strange and meaningless actions.

The second deputy prime minister, Ali Hasanov, was remembered for the fact that his grandson was in an accident that killed two people, and he served only two years in prison.

Official leapfrog: a reaction to rallies, reforms, or just ‘tightening the screws?’

On 22 October, the Ministry of Taxes ceased to exist and joined the Ministry of Economy along with the State Committee for Property and the Antimonopoly Agency.  That is, there were four different structures, but became one, which was headed by former tax minister Mikail Jabbarov.

Earlier, he was the Minister of Education, so this is the third ministerial chair in which he sits in the past six years.  He was remembered by the people for his reforms, from which, by all accounts, there was more harm than good. And even the fact that Mikail Jabbarov is a young and intelligent participant in intellectual games (a rarity among Azerbaijani officials) did not save him from ridicule.

And finally Ramiz Mehdiyev, the head of the presidential administration, resigned.  He had held this position since 1995. And in Soviet times – a similar position on the team of Heydar Aliyev.

“A foreign reader may be surprised and ask: what actually happened?  They sent four statesmen, who were over 80, into retirement.

“But inhabitants of Azerbaijan are still confused: how will we continue to live without Ramiz Mehdiyev?  In the minds of many, it was this man who was the core of our authoritarian system, since the days of Soviet “stagnation.”  He seemed eternal, unsinkable, an armadillo, a dinosaur, an Egyptian pyramid. And the simultaneous dismissal of three more elderly officials (two deputy prime ministers and the president of the Academy of Sciences), of course, could not be a coincidence.

“Under the pretext of team rejuvenation, key positions in the government are being taken under control. One might think a fight is going on between one clan (led by the first vice president) and another (the old guard, the men originally coming from Nakhichevan and Armenia).

“Not so simple. But one thing is clear – a redistribution of property is underway, and it will escalate as oil revenues go down (and the peak of these revenues has already passed).

“Rallies can be an instrument in this struggle within the elite itself.  Therefore, the desire of Ilham Aliyev to create an image of a reformer is understandable. But I would not say that all this shuffling is the result of one rally.  Of course, this was conceived and carefully weighed.”