For more than a month now, construction work has been almost completely suspended on the Georgian section of the Baku-Tbilisi-Kars railway,

The reason is that for four months, Azerbaijani company Demiryol has not paid the wages of workers working on the construction of the road.

The company acknowledges its debt and is not refusing to pay up, but has not named specific dates for when it will be able to pay workers.

The workers fear that the company, which under its current contract will soon have to leave Georgia, will not pay them their salaries. 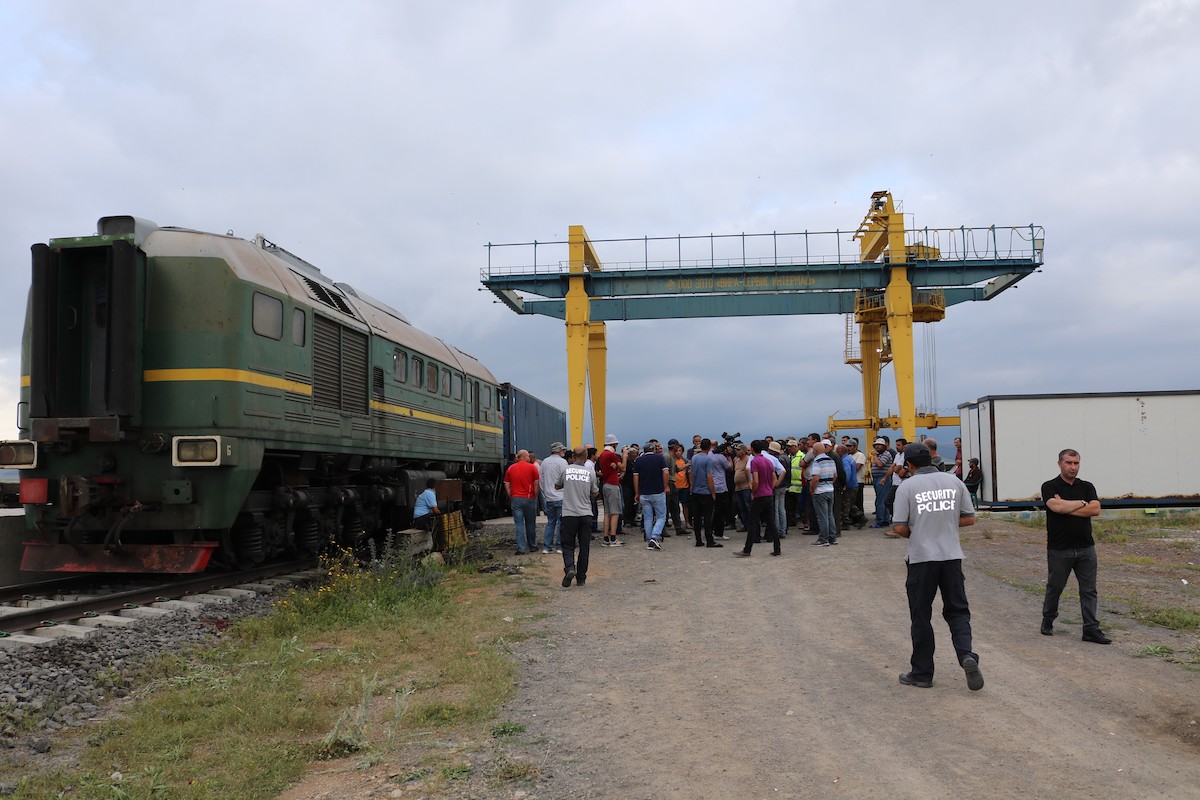 On July 23, the workers stopped dealing with cargo coming in from Turkey at the Akhalkalaki station and resumed only after another promise from the company that the debt would be repaid in the coming days.

The Baku-Tbilisi-Kars railway is part of an international ambitious project, the idea of ​​which is to connect the railways of Azerbaijan and Turkey through Georgia – and thus create a cheaper and shorter alternative transport corridor from Central Asia through the South Caucasus to Europe.

A large piece of this strategically important road passes through the Georgian region of Javakheti, which is predominantly populated by ethnic Armenians.

Residents of Javakheti were initially against the project – the main problem for the local Armenian population was that the Baku-Tbilisi-Kars route focuses on Azerbaijan and excludes Armenia.

Moreover, the railroad had to go through the most fertile of local lands – sown fields and pastures.

However, the prospect of creating jobs in a region where there is staggering unemployment outweighed all the disadvantages.

Even before the construction of the Baku-Tbilisi-Kars railway, the government promised that many jobs would appear for the residents of Javakheti in construction and later with operation.

People expected that in terms of employment, the project would serve as a substitute for the former Russian military base, where many of the local population were formerly employed.

However, the local population says they have been largely deceived, claiming that Azerbaijani and Turkish companies hire ‘their own’ people in the region.

“No local Armenians are hired. They bring their own Azerbaijani workers from Baku and Marneuli [ed. A region of Georgia settled largely by ethnic Armenians]”, locals says.

Residents of the village of Kulalis in the Ninotsminda District – where the railway runs through fields – the total number of workers amongst the local population does not exceed twenty people – and from their village alone, just eight.

One of them is Ashkharabek Khachatryan. He is 30 years old. Ashkharabek has worked from the very beginning of the construction of the railway as a welder.

He is the only breadwinner of a family of ten members. His parents are retired, his brother and wife are disabled, and they are raising 4 children. His wife recently underwent an operation, now she is unable to work even on the field. The large family has been waiting for four months for Askharabek to be paid.

“The Georgian branch of this company will soon close and leave Georgia, and Turkish company Polat will come instead. It is clear that Polat will not close the debt of another company. Who will help us?”, Ashkharabek asks.

In the village of Kulalis, Ashkharabek is not the only one waiting for his salary.

Vladimir Arabian transported stones and sand for 80 lari a day with his own truck. He has also gone on strike and for the third day not gone to work.

“I not only spent my time working, but also crashed my truck. How much can you work without money?” says Vladimir.

Not only local Armenians, but also Azerbaijani workers from Baku and Marneuli are on strike against the company. Their salaries range from 600-1500 GEL (200-520 USD), depending on what they do.

Due to the fact that the company has been consistently delaying wages for hard work, discontent with the railway project itself is growing amongst the local population.

Locals are once again saying that the project has brought more harm to the region.

Men recently gathered in the center of the village of Kulalis to discuss the issue:

“What good [has it brought], only harm! All the fields are spoiled, there is no pasture for grazing, there is no land to cultivate, what benefit have we received?”

“They don’t hire us to work, and those who are hired don’t get paid.”

“They stripped the people of their land. If a villager is forced to sell their land, then how are they to live?”

“At first we did not agree to sell our lands, they began to drag us to court, made up stories, even threatened us, but in the end they reached their goal. We were forced to abandon our lands. In return, we are not even given jobs”, locals say.

About 1,000 people live in the village of Kulalis of the Ninotsminda region, with about 110 farms. The railroad here blocks the main road leading from the village to the city.

The situation is similar in the Akhalkalaki region, where the railway runs through four villages: Kartsakh, Dadesh, Bozaly and Sulda. The length of the railway is 25 kilometers, and almost the entire way goes through arable land.

The local budget of Akhalkalaki has received tax from the railway for four years.

Over the past four years, about 20 million lari (about seven million dollars) were contributed to the local budget of Akhalkalaki, however, there are no tangible positive changes in the villages through which the railway runs.

In these villages, residents continue to list the problems in the same order: bad roads, bad drinking water, lack of pastures and more.

Chairman of the Sakrebulo Akhalkalaki Nairi Iritsyan said that the local budget receives a tax of about 5-6 million lari. This money is distributed to the whole municipality:

Iritsyan said that in general, the local economy has not felt any benefit from the railway.

“The railway runs at a slow pace. We almost do not feel it. So far, only ten wagons of wheat and barley are being taken and brought – and that happens at night, we don’t actually see this”, he says.

“The expectations were great, they promised that thousands of jobs would be created, that local people would be hired, the infrastructure would be developed in accordance with the railway, hoped that the private sector would do business – hotels, and much more”, says Iritsyan.

However, Georgian company Marabda Akhalkalaki, which is also involved in the construction of the road, says it is too early to talk about the benefits, since the railway is still operating in test mode.

Two stations were built in Georgia: Akhalkalaki and Kartsakhi. 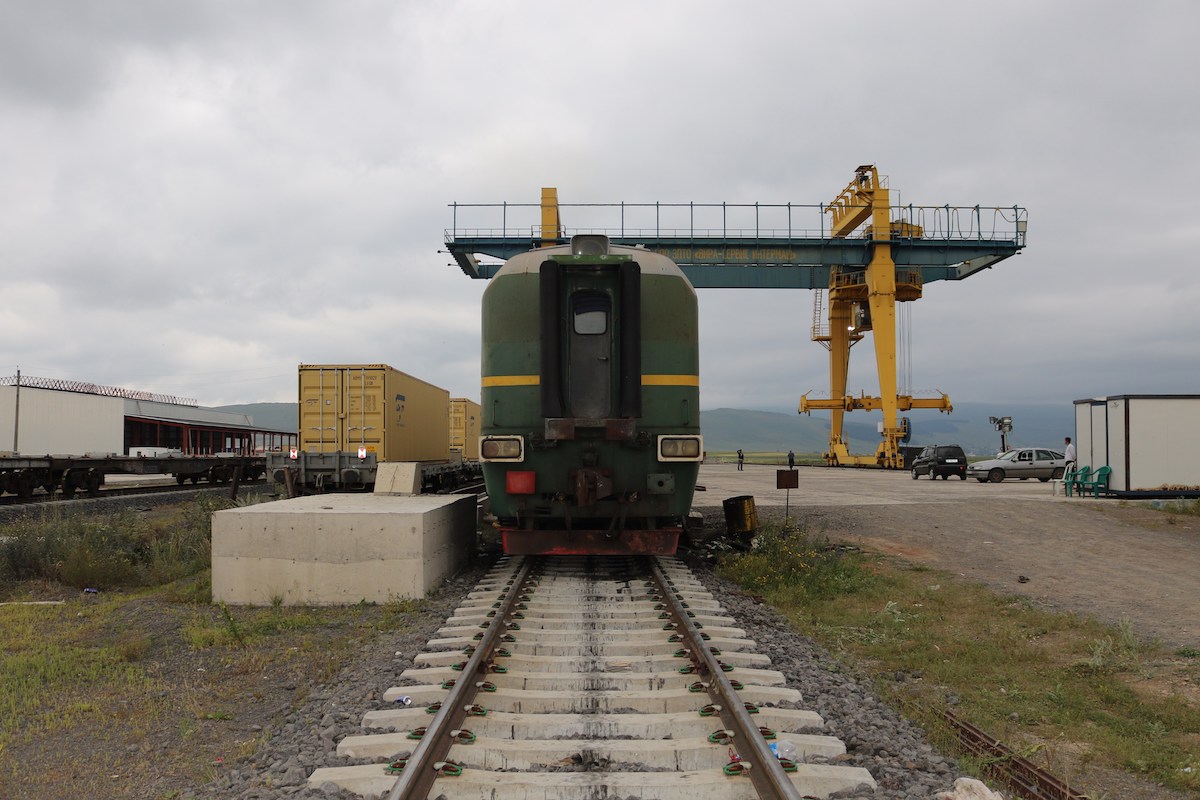 Construction work at Kartsakhi Station have been completed, but it has not yet been opened. Work is still underway on the Akhalkalaki station.

The road is designed to carry five million tonnes of cargo per year. However, for the time being, only a few cars pass on this route on average two or three times a week.

As for passenger trains…there are none.

According to the management of Azerbaijan Railways, the Baku-Tbilisi-Kars railway passenger traffic was to begin in the second quarter of this year.

Trial passenger cars from Switzerland were brought to Akhalkalaki on March 24, 2019.

These wagons were ordered by Azerbaijan Railways ordered from the company Stadler. They will transport passengers on the Baku-Tbilisi-Kars railway.