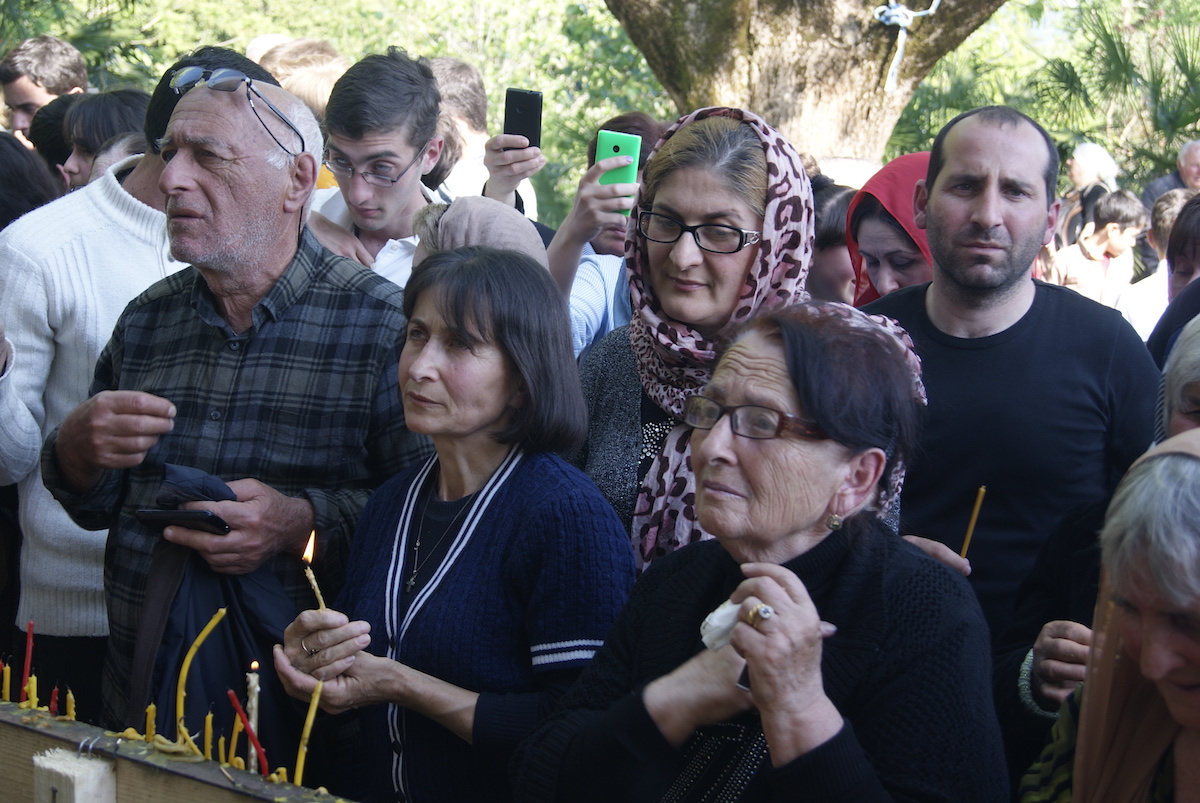 Outlines resembling the image of Virgin Mary appeared on Easter day on a window panel of one of the private houses in First Gal village, Eastern Abkhazia. Now pilgrims flock to this place. A similar miracle occurred in neighboring Tkuarchal a couple of days later.

“Go straight, over there … don’t turn anywhere, and you will see many cars there,” a local man said, pointing at the road junction.

The route to the house of the Ketsbaia family has been the most popular one in Abkhazia for a few days already. Pilgrimage to this place hasn’t ceased for a moment after the rumor was spread among the locals that an image of the Holy Mary had appeared on the house window.

In the neighbors’ words, they saw something like a shining light at Ketsbaia’s house, late at night, 3 days before Easter. 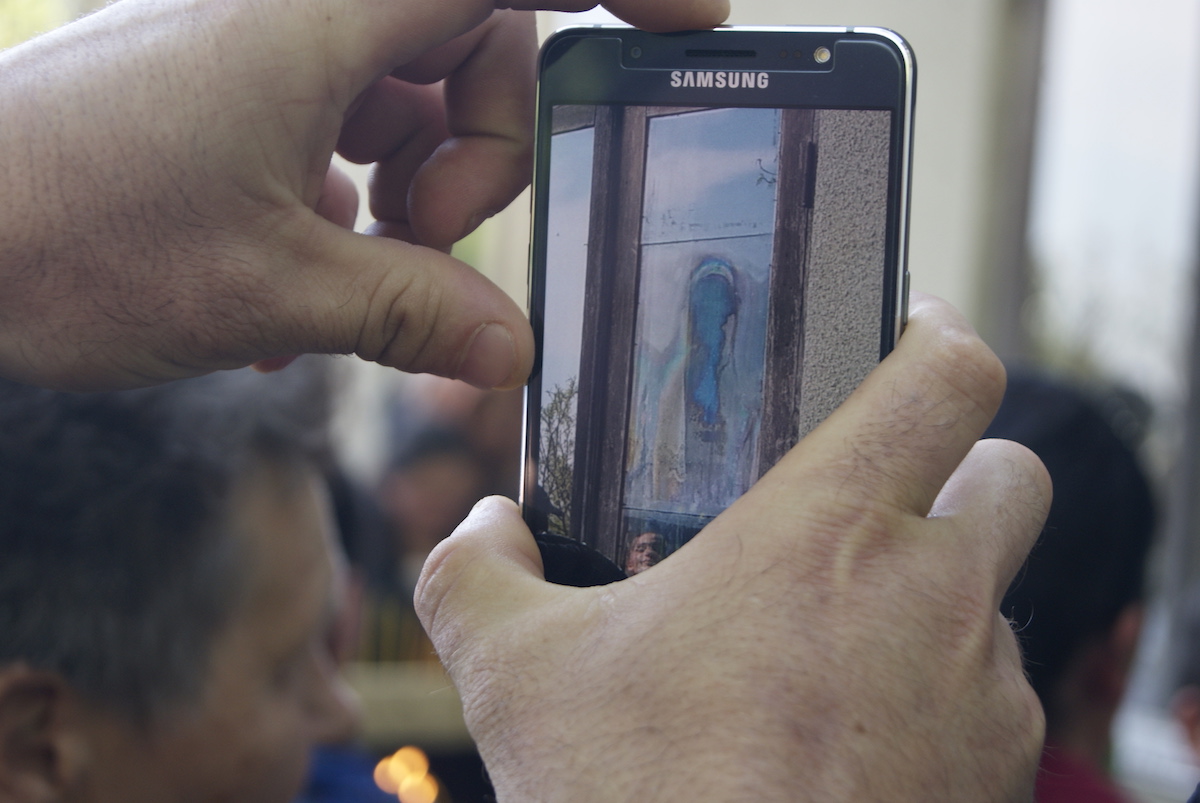 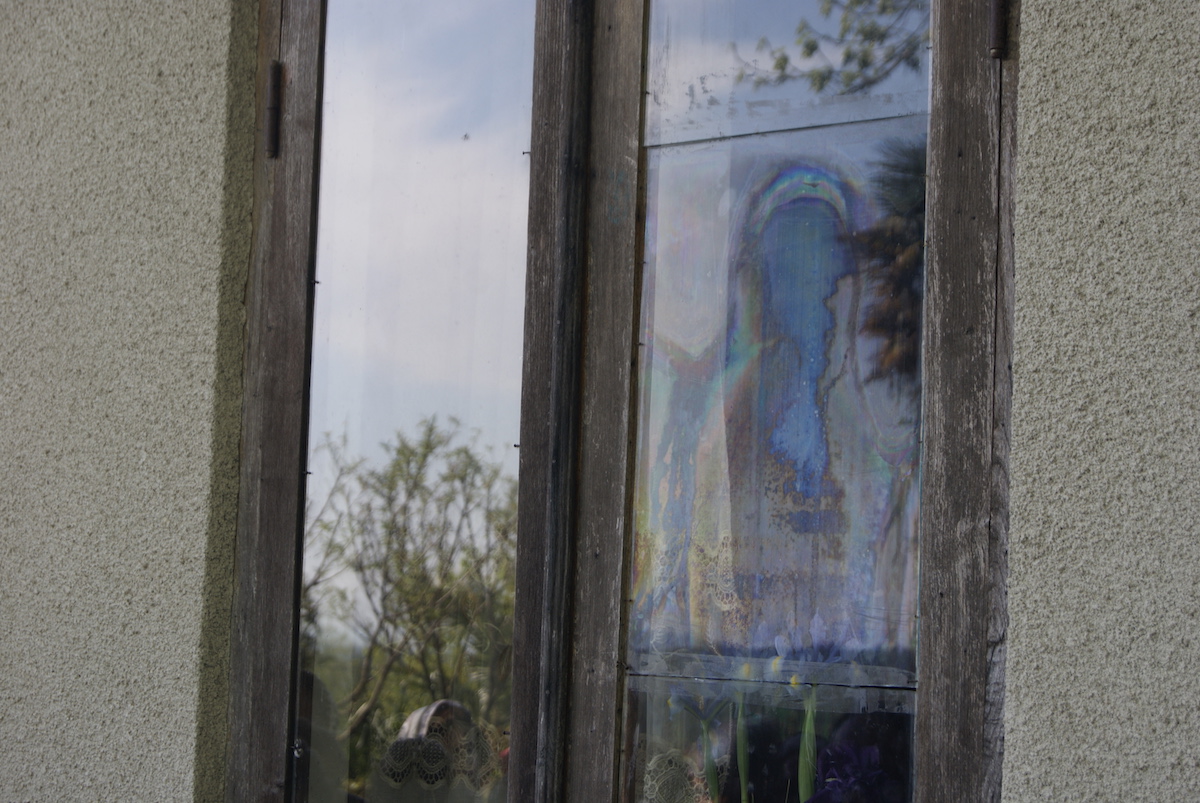 “There has been a 1.5 kilometer long traffic jam here recently. So many people come here. And we are happy about it. It’s a real miracle, especially as it happened on Easter day. People come here to light candles and pray,” said Badri Ketsbaia, the house owner.

“Having returned from a trip to Ilori Cathedral at around 7 p.m. on Sunday (16 April), my wife and I entered the house and saw that image. At first, I thought that the kids had probably played a trick on us. However, when I touched it, I realized that it wasn’t a drawing. My child captured it and uploaded it to the Internet. People started coming to our place the same evening,” said Badri. 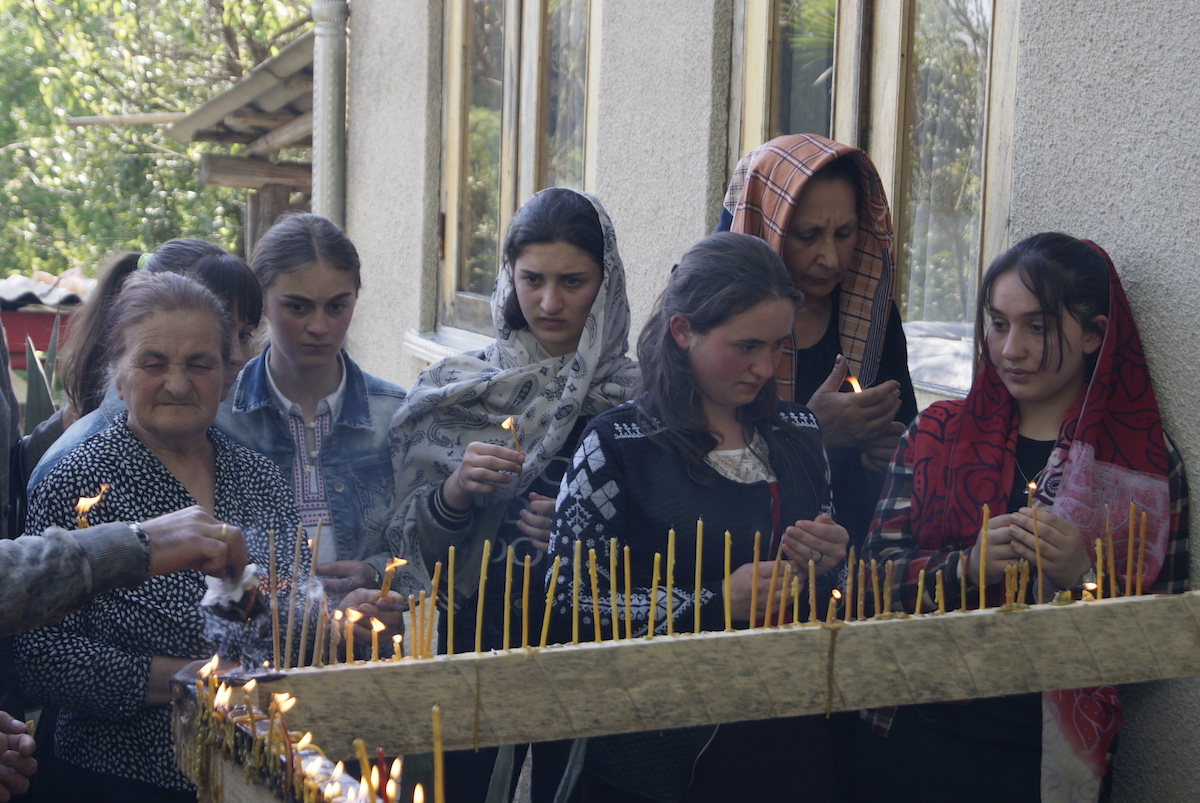 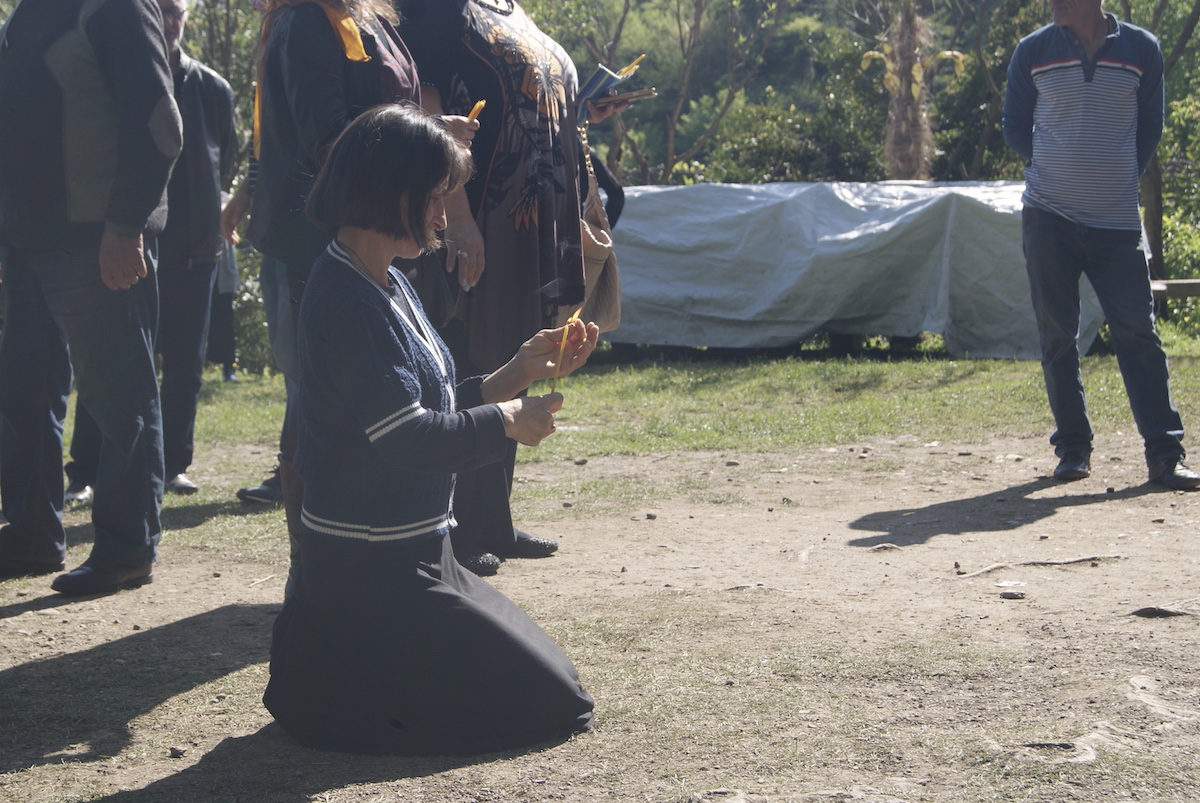 Every morning, as they come to this window, the Ketsbaia family could see crowds of people praying. The house owners admit that they haven’t expected such a miracle to occur in their house. All members of their family are religious, but they rarely go to church, since there is no church in the village. There is only a small one on the mountain in the Namarkel rural area, 10 kilometers away from their house. There hasn’t been a church service for years.

The church could hardly be seen from the window on which the image appeared. Badri believes, it’s very symbolic.

“We could feel God’s grace and we sleep well at night, we aren’t afraid of anything. God protects us,” he says.

The house owner goes to another window, where there are a few icons and a sanctuary lamp, as well as a large icon of the Holy Great Martyr George – the Victory-Bearer, hanging on the wall over there.

“We usually light the candles and pray here. It has already become a sacred place. But the image appeared on another window. When people have faith, they start to show more respect and love to each other. What else could one need?” says Badri. 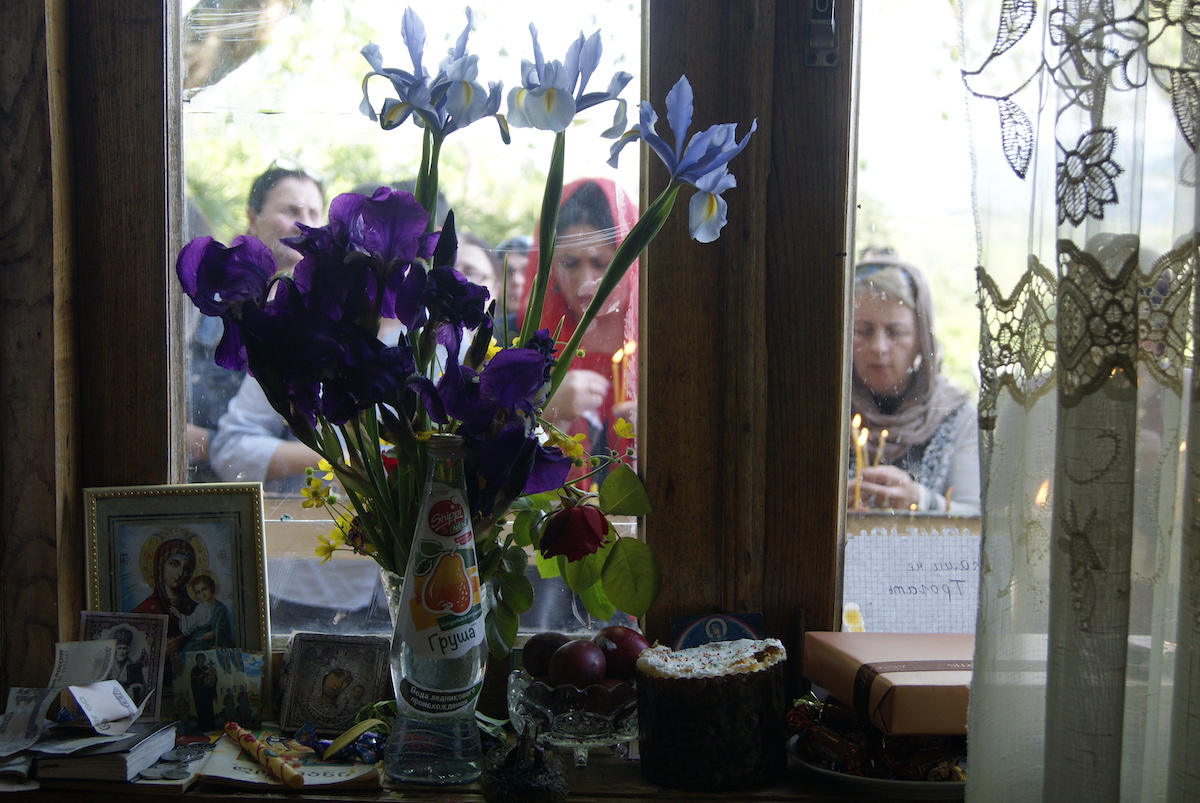 People, who have gathered at the window with the holy image, cross themselves, light candles and put them on a small wooden railing, covered with wax. They pray and take photos of the image with their cell phones.

A small icon of the Virgin Mary, as well as candles and Easter cake, could be seen outside the window.

“It’s St. Nina, Equal to the Apostles,” said a pilgrim woman with a black-and-white icon of St. Nina in her hand, which she showed to everyone standing nearby. “See, they look exactly alike – they have the same face, same veil and the manner they hold it. Whereas the Virgin Mary has a baby in her arms,” she added. 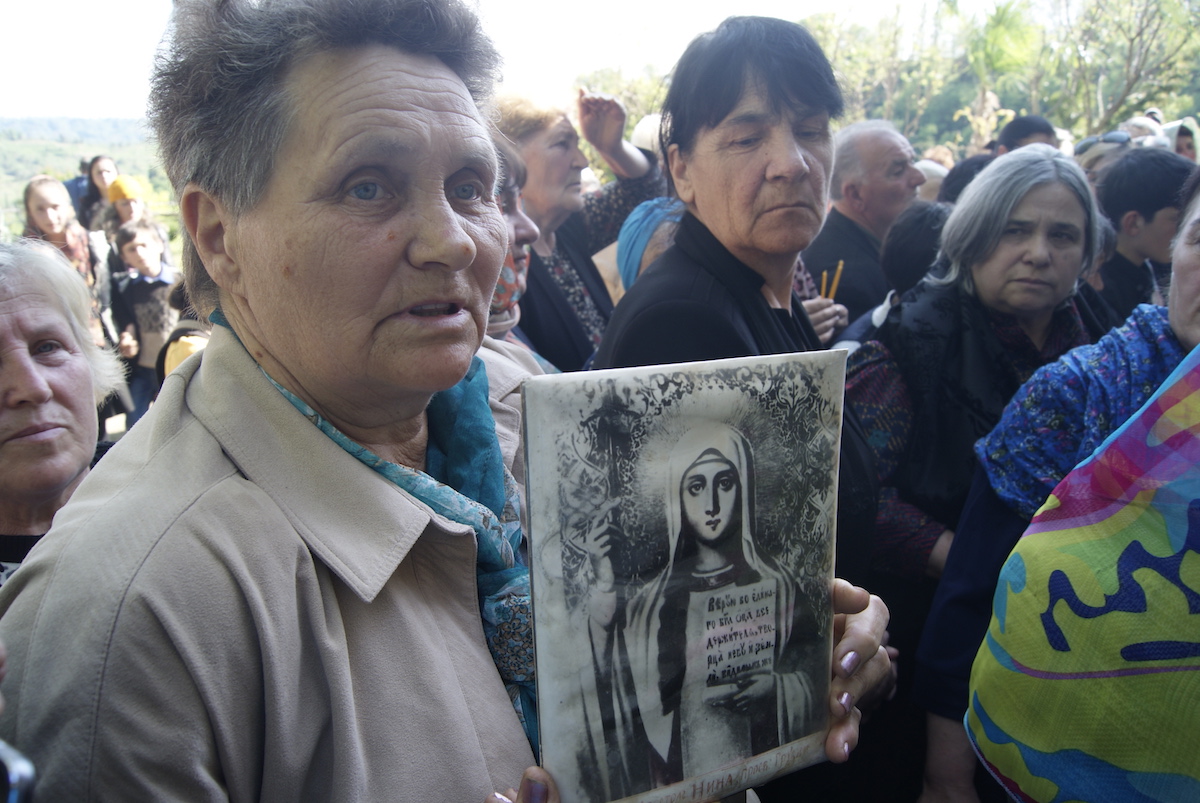 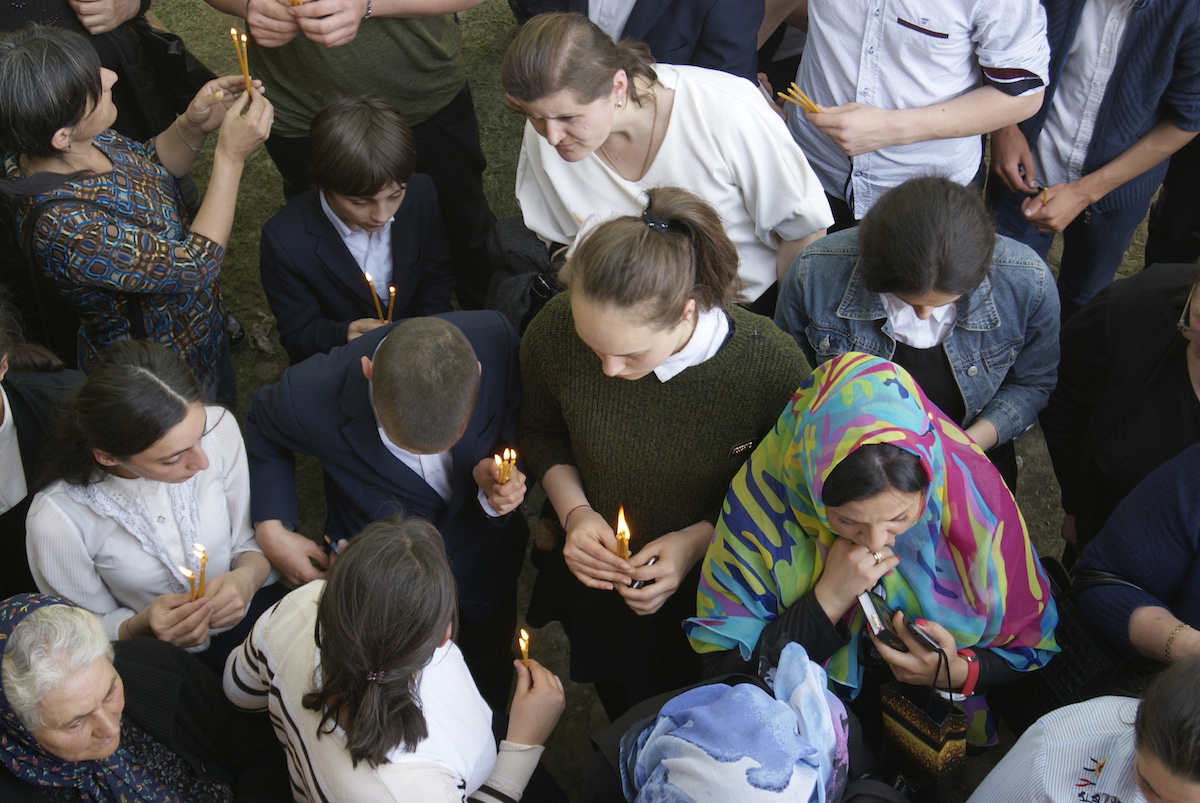 According to Reverend Father David (Gvazava), a hieromonk of the Abkhazian Orthodox Church, it will take time to study this phenomenon. In his words, an ecclesiastical commission, led by Priest Bessarion, was set up, which has already visited the place where the image appeared.

“The very fact that the image appeared on Easter day is God’s sign from heaven. More likely than not, it’s an acheiropaeic image (not made by human hands) and we will closely observe it. Many people go to that place, either out of faith or curiosity, but that means a lot. However, it takes time to draw the right conclusion,” says Father David.

The Ketsbaia family has lived here for 7 generations, or, to be more precise, since the 18th century.

Badri, the house owner, runs a small business in the city and has a farm. Like many other villagers, they mostly grow corn, tangerines and nuts, and are also engaged in cattle breeding and beekeeping.

According to Zurab Ketsbaia, Badri’s neighbor, there are 80 families in the village, which is approximately the same number as before the war [Georgian-Abkhazian conflict in the 1990s]. 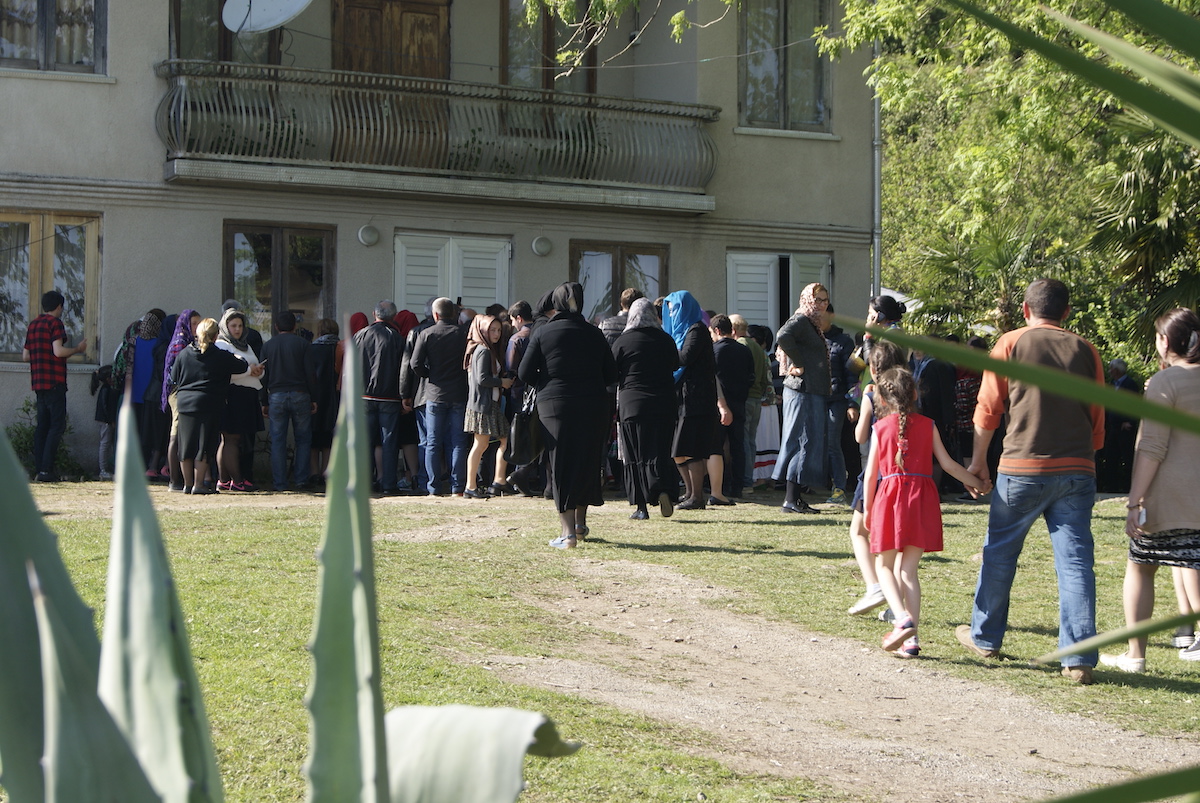 However, the Gal miracle hasn’t been the only one. A similar image appeared on a window of one of the apartment houses in Tkuarchal, on the night of 21 April.

Some people claim, the image appeared after candles had been lit from the Holy Fire, brought by the pilgrims from Jerusalem. The hostess was said to have carried the fire throughout her apartment.

Crowds of people gather at the house where the image appeared. Like the pilgrims at First Gal village, they also light candles and pray at the window with the holy image. 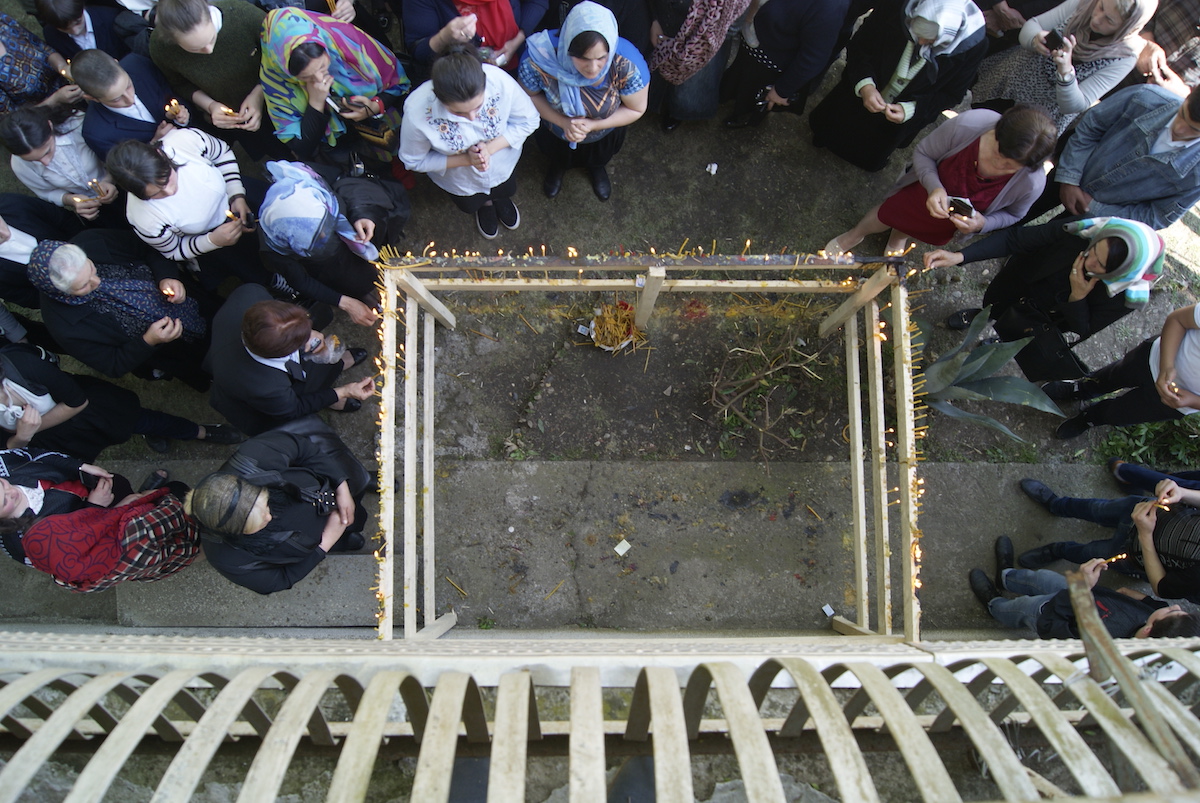 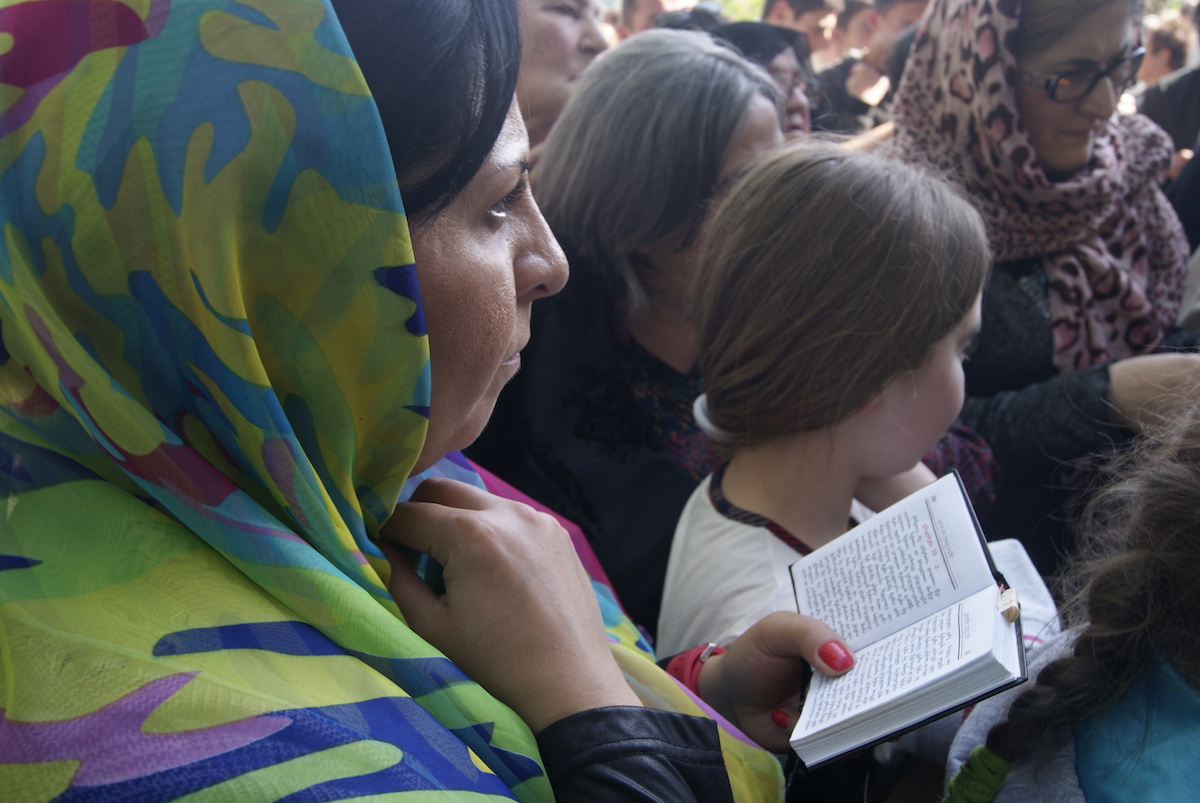 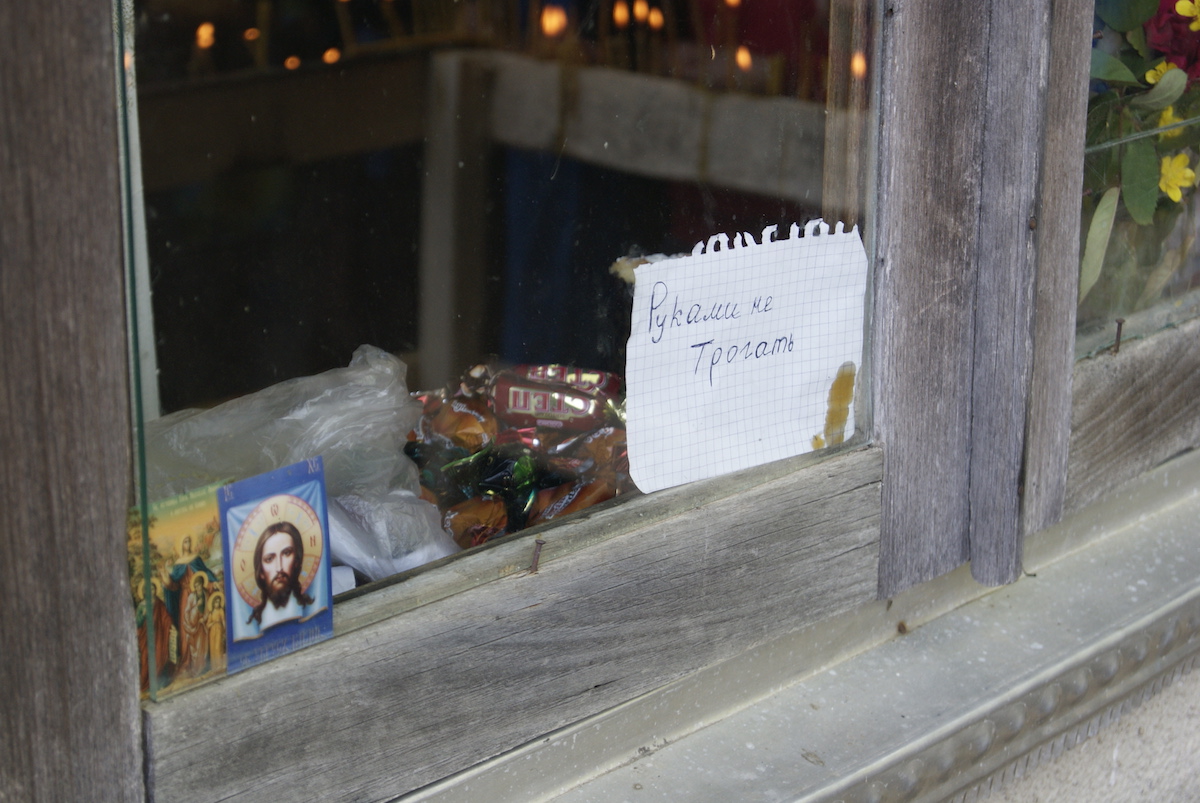