A fire broke out at the Mingachevir thermal electric station in the the evening of 2 July. Despite assurances by officials that everything is under control and repairs are underway, there was still a considerable amount of chaos in the country the next day. The electricity came and went, then water was cut off. The metro and the traffic lights also stopped working.

Join us in a walk through town and see how Baku looks two days after the ‘electricity apocalypse’, and listen to the stories of people on the streets and on social media.

“The apocalypse continues. The metro isn’t working. There are throngs of people at bus stops but they can’t get to work. Most of the buses are free, but forget about getting a seat. The taxi drivers are having a real blast, raising prices without even blinking – they don’t seem to understand that they’re doing something wrong.” 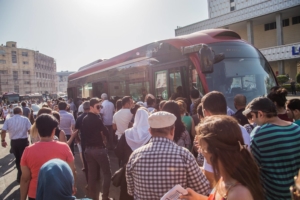 The metro started working during the second half of the day, but after yesterday’s unexpected breakdown when people had to get out of the underground train carriages and walk through the tunnels, nobody is rushing to get back into the metro. There are no guarantees that the same won’t happen again.

A girl of about eight years, who had latched on to her mother’s sleeve in front of the turnstall, was crying and said she was afraid to go into the metro. Her mother thought for a bit, and then they left together.

There are even free spots in the train carriages at Darngul station, which is usually packed at this time. 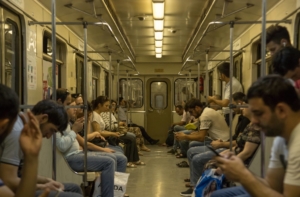 “We had to go to sleep all sticky and sweaty because there was no electricity … The unbearable heat, even for Baku, adds such a torturous element to everything that you feel as if you’re the protagaonist of some novel in which all sorts of disasters are about to take place.”

The unbearable heat has gone on now for a week already. The average temperatures are in the 40s. These days Bakuvians don’t even leave their houses and stay at home under the cool breeze of the air conditioner – if they have one – as it is practically dangerous to be outside.

It was at first unclear as to why the water was shut off on 3 July after the electricity disappeared. It was later explained that the water purification machinery at Jeyran-batan lake stopped working. 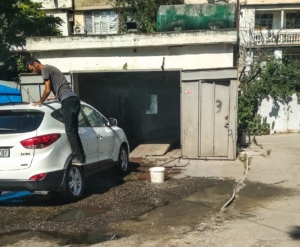 A car wash in Azadliq Prospect is still seemingly working. I asked a boy how long it had been since their water was restored.

“They didn’t turn it on,” he answered. “It’s water from the tank. We’re trying to save.”

“It’s the third day that we don’t have lights or electricity. Thankfully they made the buses free today. Such attention from the state – I almost teared up.” 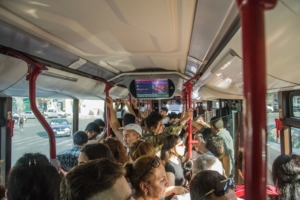 Taking people’s fear of the metro into account, there are horrible crowds at the ‘free’ buses during peak commuter times. In a bus from the centre to the Keroglu metro station, about a half hour’s ride, everybody was going to the last stop, and so at every stop only two or three people could get in if they squeezed and pushed hard enough.

Passengers discussed the heat and the lack of water. “How I want to shower, I haven’t taken a shower in three days.”

There were also rumours of people dying from the heat or in hospitals where there were no generators. However, the Ministry of Health announced last evening that there were no such deaths and that the generators were in working condition.

An elderly woman, who wiped her face every minute with a handkerchief, said to a young girl standing next to her: “Do you want a tissue, don’t worry, it’s free.”

“In light of the fact that the metro isn’t working today, I’ll take two people from Ukrainian Circuit to 28 May metro station. Preferably women.” 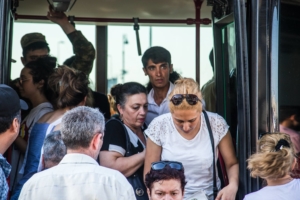 Another conspiracy theory arose that the fire at the thermal energy station was started by Armenian saboteurs. The rumour came about from photos and videos of how Baku’s Flame Towers were accidentally lit up in the Armenian tri-colours when the electricity returned. This version of events hasn’t been proven or corroborated by anyone.

“Half the town was walking in shorts and mini-skirts, so Allah punished you – he took away the electricity and water. You must read the Qu’ran and wear long skirts.”

“Tomorrow you might end up in a tunnel in the heat or in a hospital where there are no generators. I doubt that you will want to justify those who have stolen money and put your life on the line then. It’s time to stop living by the laws of a totalitarian society.”

A girl without social media accounts:

“It seems that someone wants to attack us, is just one blast enough?”

“Tbilisi: the metro didn’t work because of a workers’ strike.

Baku: the metro didn’t work because of an undefined situation concerning the country’s energy system.

“I am now cursing all the companies and individuals who have left Baku without electricity and water with all the words I know!”