State relics: Queue to see the relics of the holy martyr guarded by the military

At the end of last week, the remains of Queen Ketevan, who was sainted by the Georgian Orthodox Church, were returned to Georgia from India. Relics of the holy martyr will remain in Georgia for six months, traveling around the country. On 24 September, Queen Ketevan’s relics were placed in Tbilisi’s Holy Trinity cathedral. From early morning, people wanting to see the holy relics took their turn waiting in line. Due to the large crowd in the church, the military had to be called in for help. For three hours, soldiers unsuccessfully tried to restore order to the queue, as everyone wanted to get closer to the holy queen’s relics. Patriarch Ilia II addressed the congregation during Sunday’s service and congratulated them on ‘this great day’. He expressed special thanks to the Minister of Culture, Mikhail Giorgadze, who actively took part in the delivery of Queen Ketevan’s remains from India. The Patriarch presented the Minister with an icon of the Blessed Virgin. 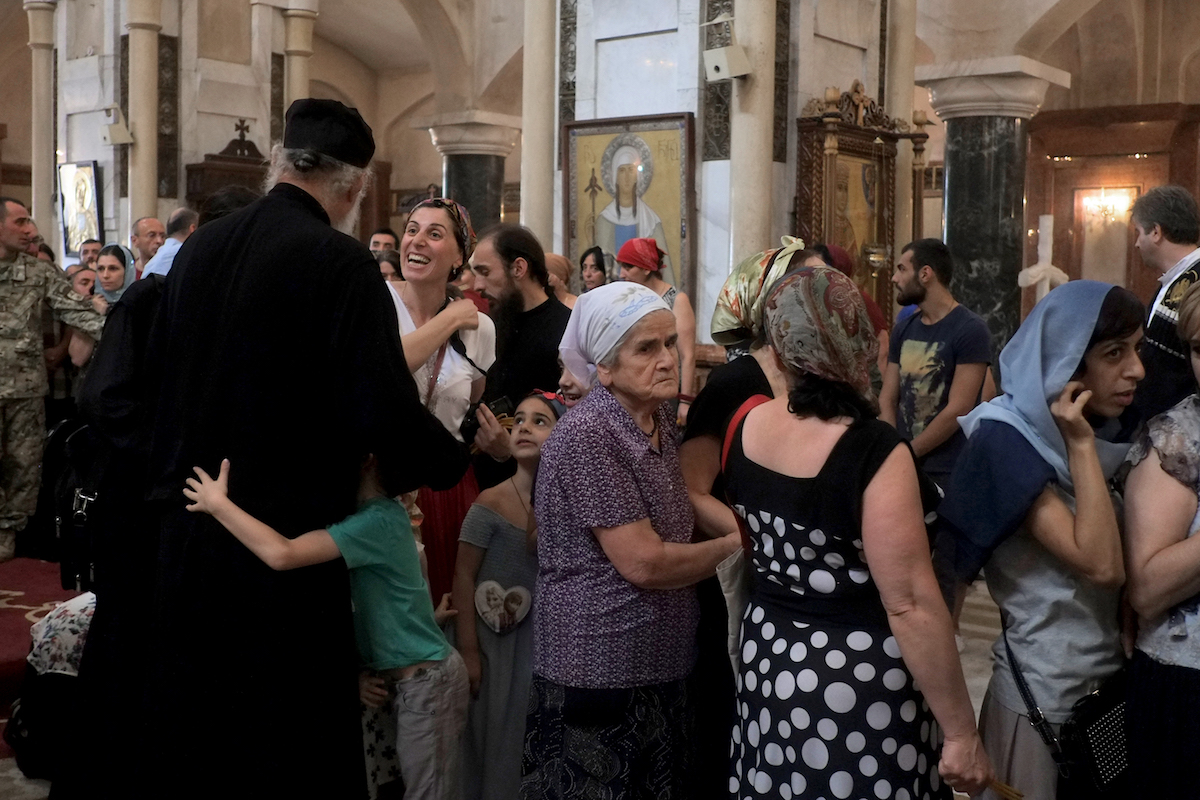 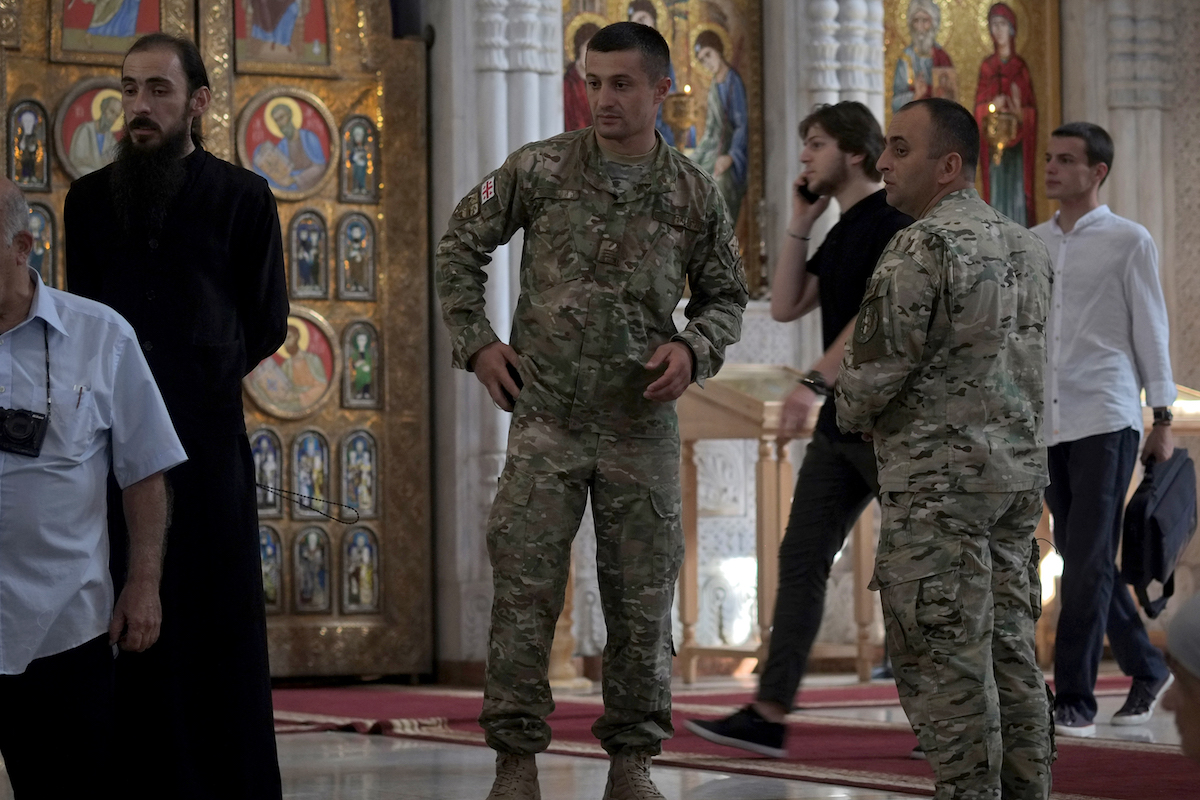 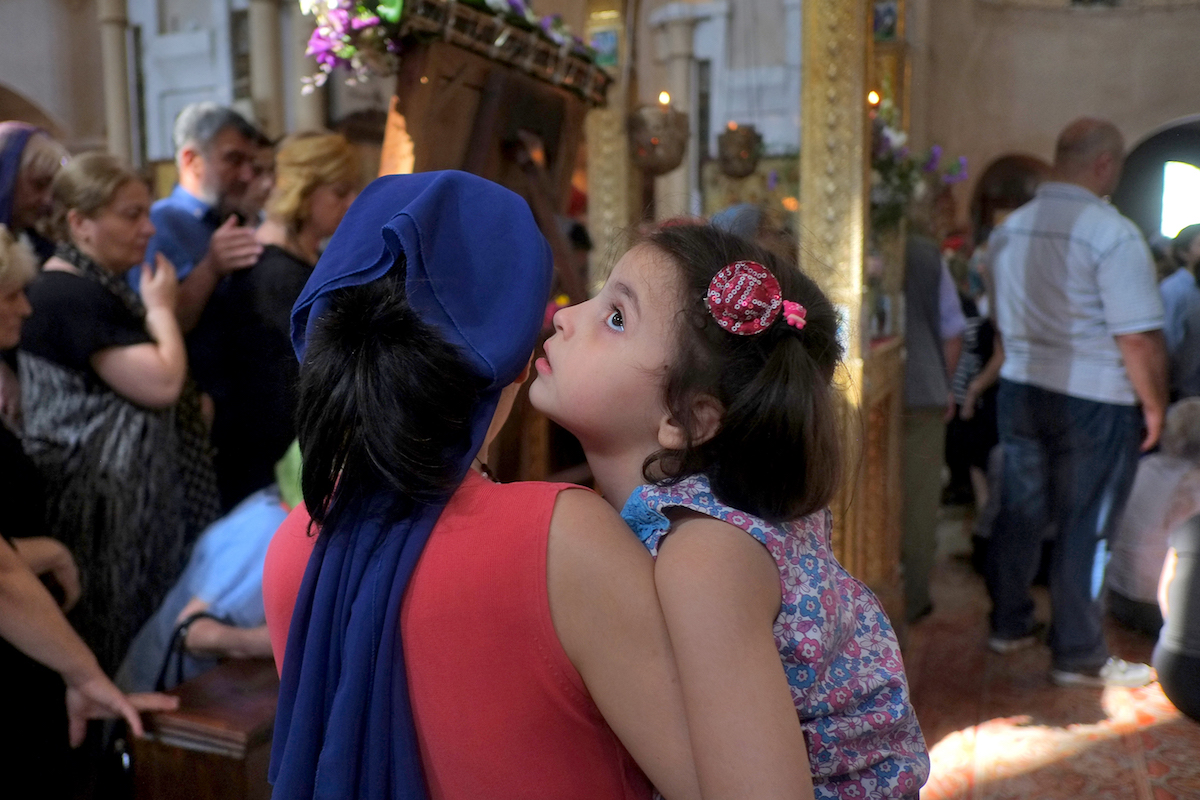 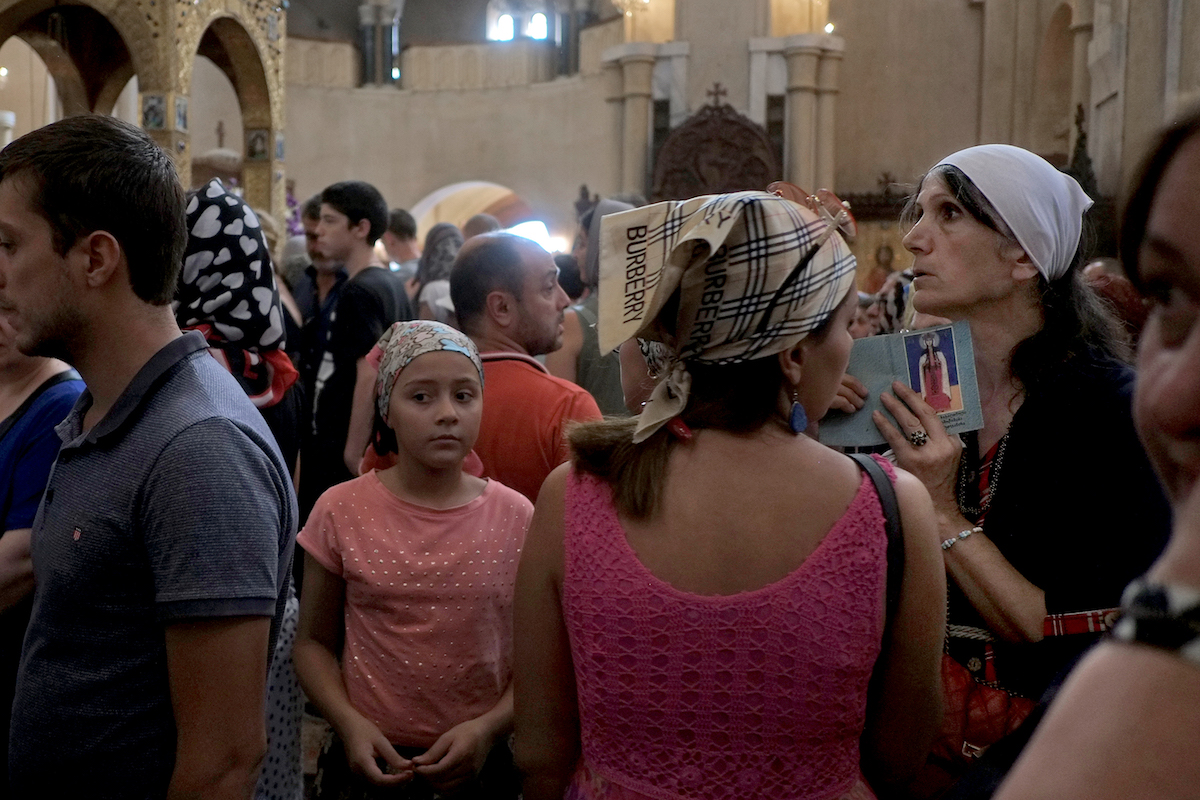 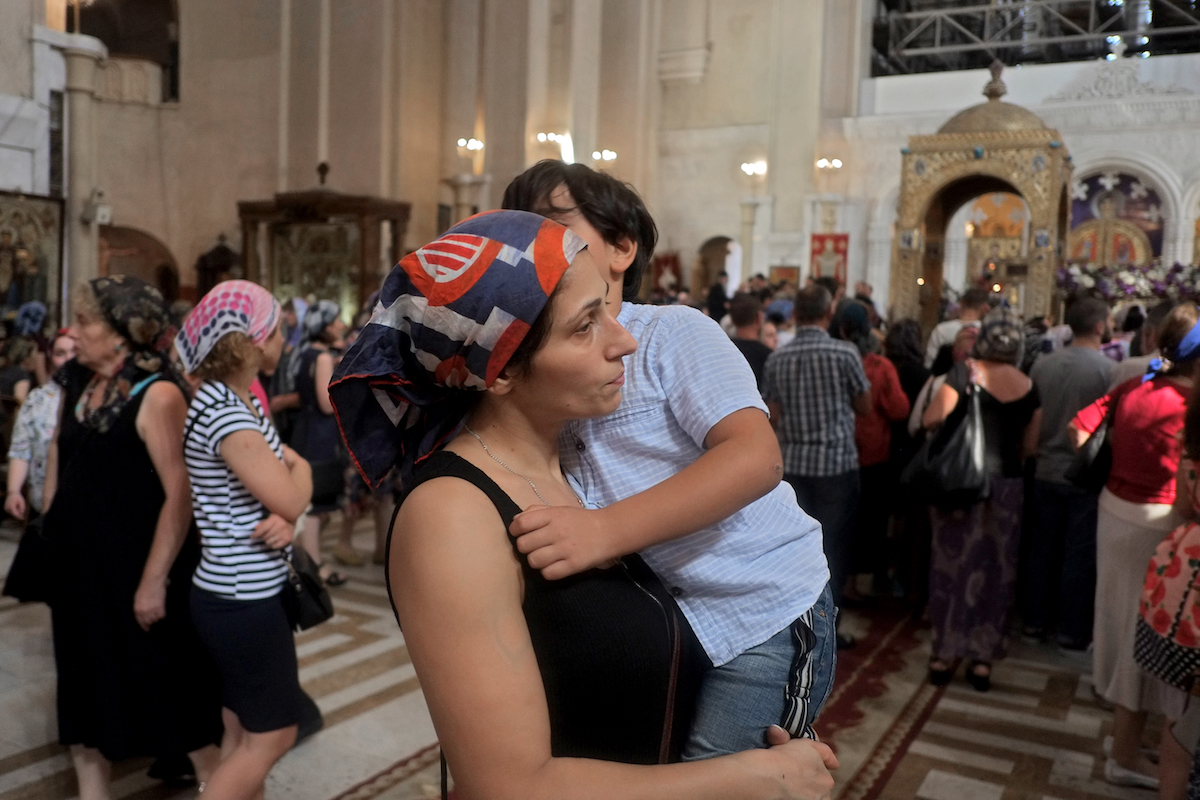 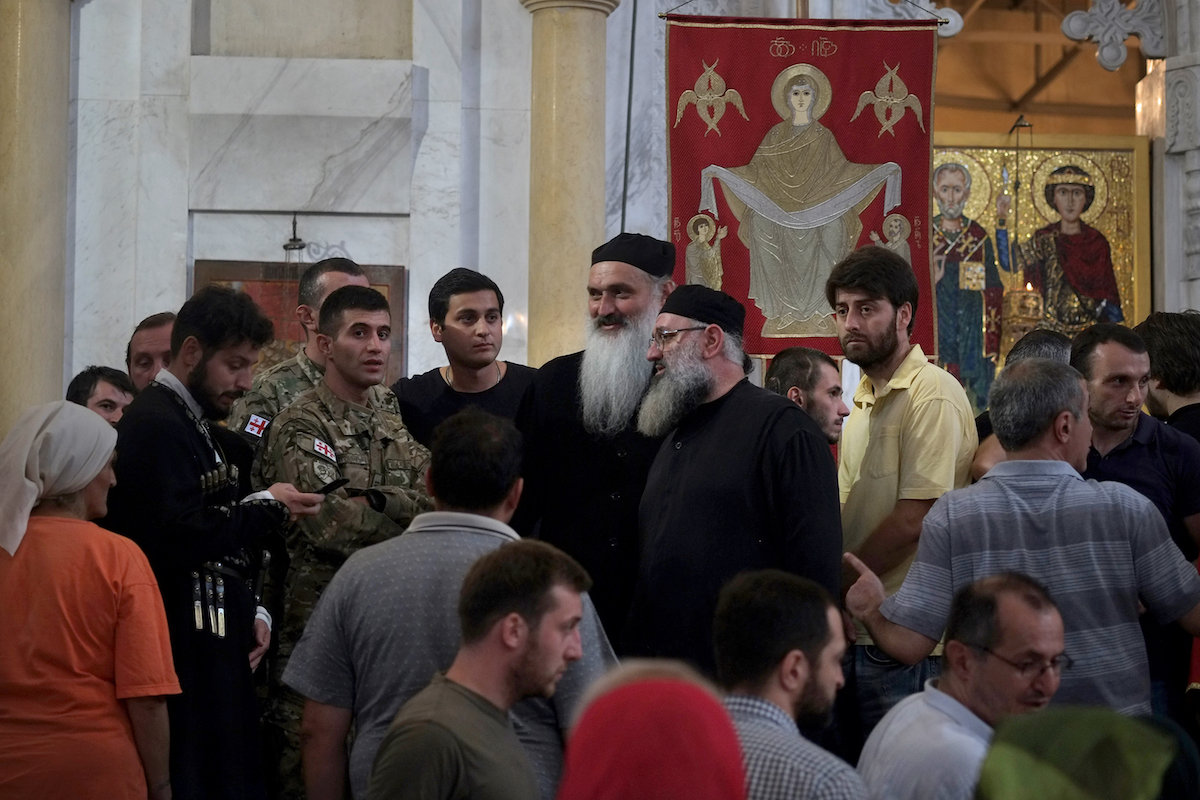 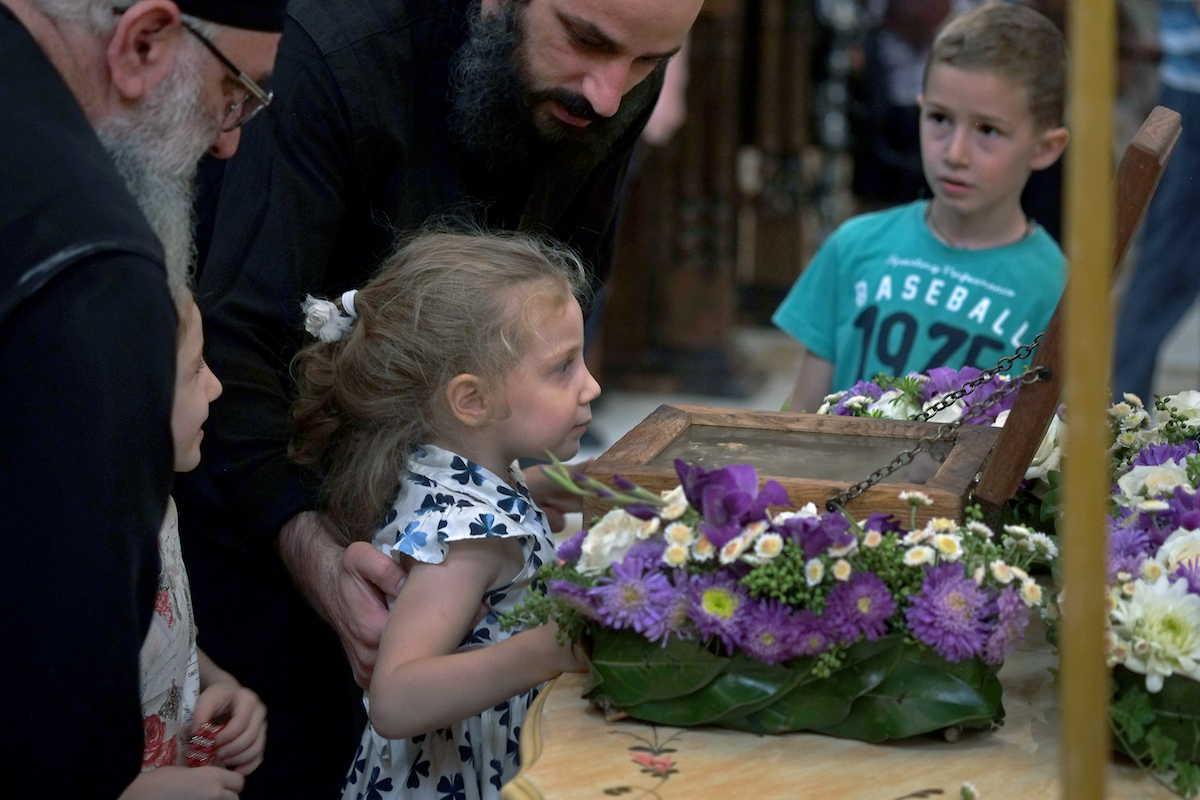 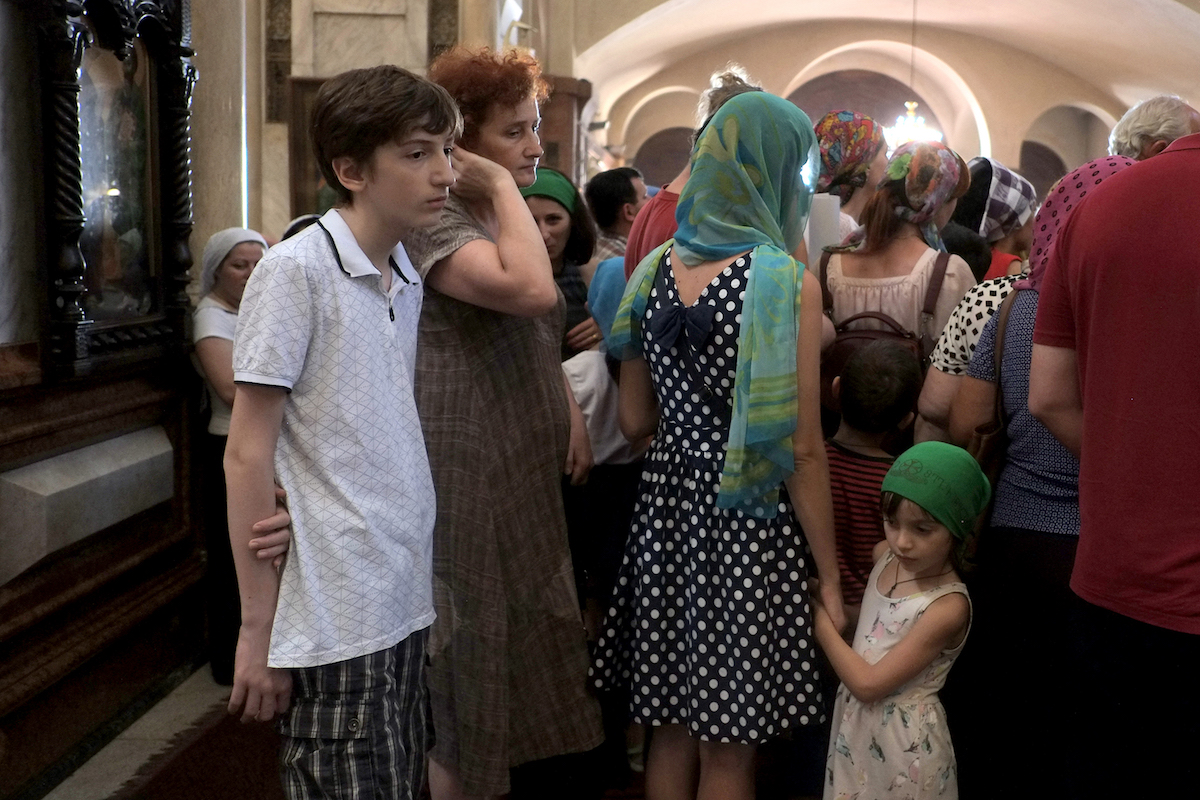 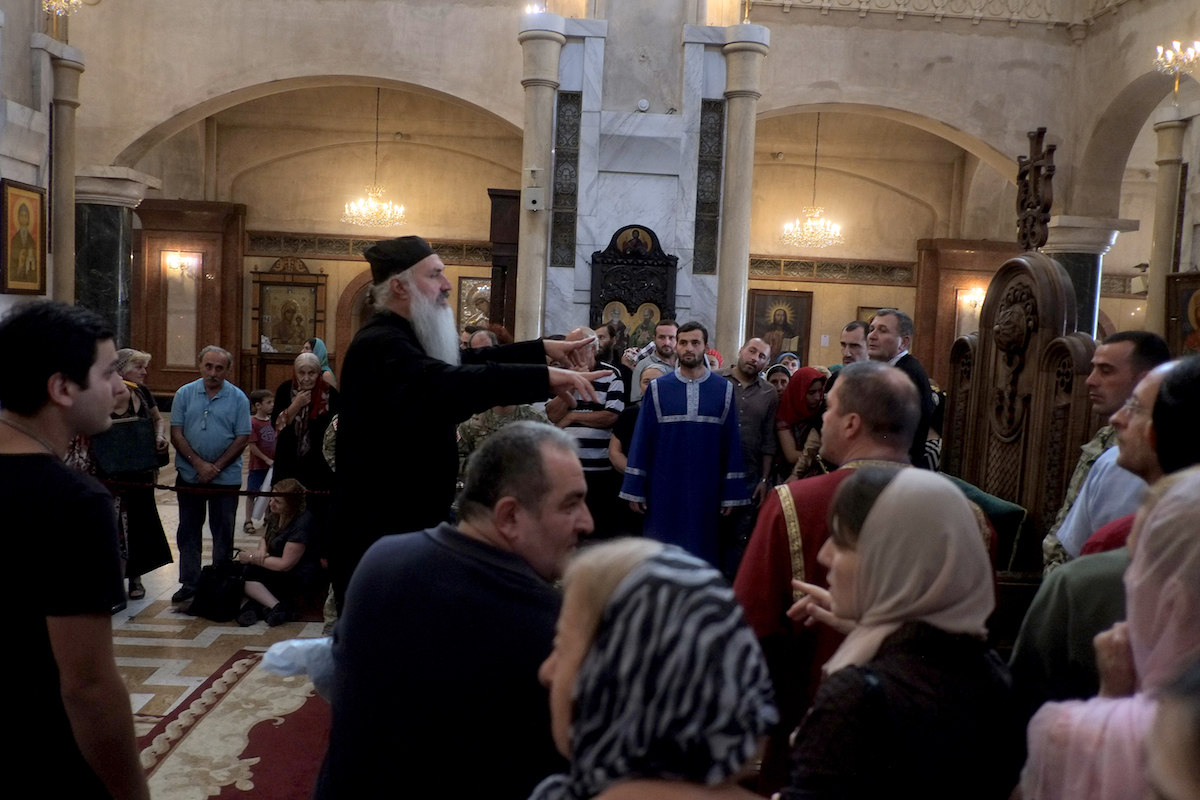 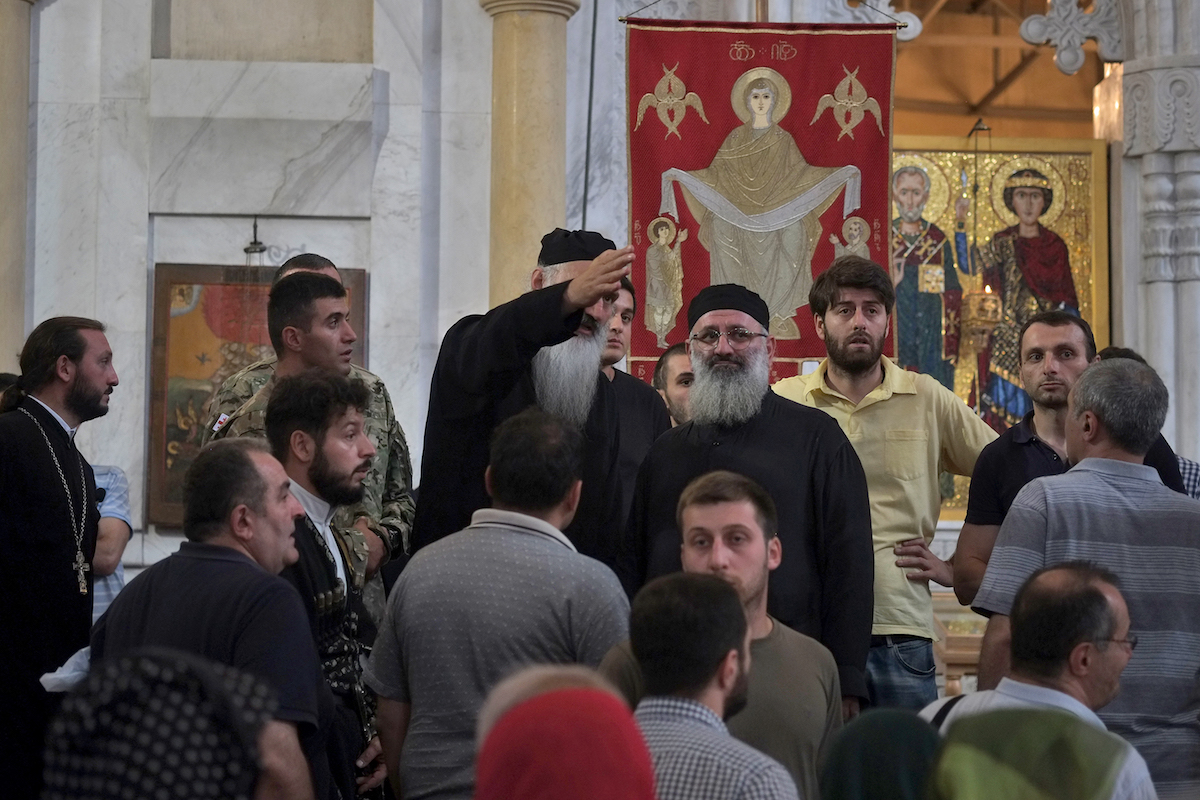 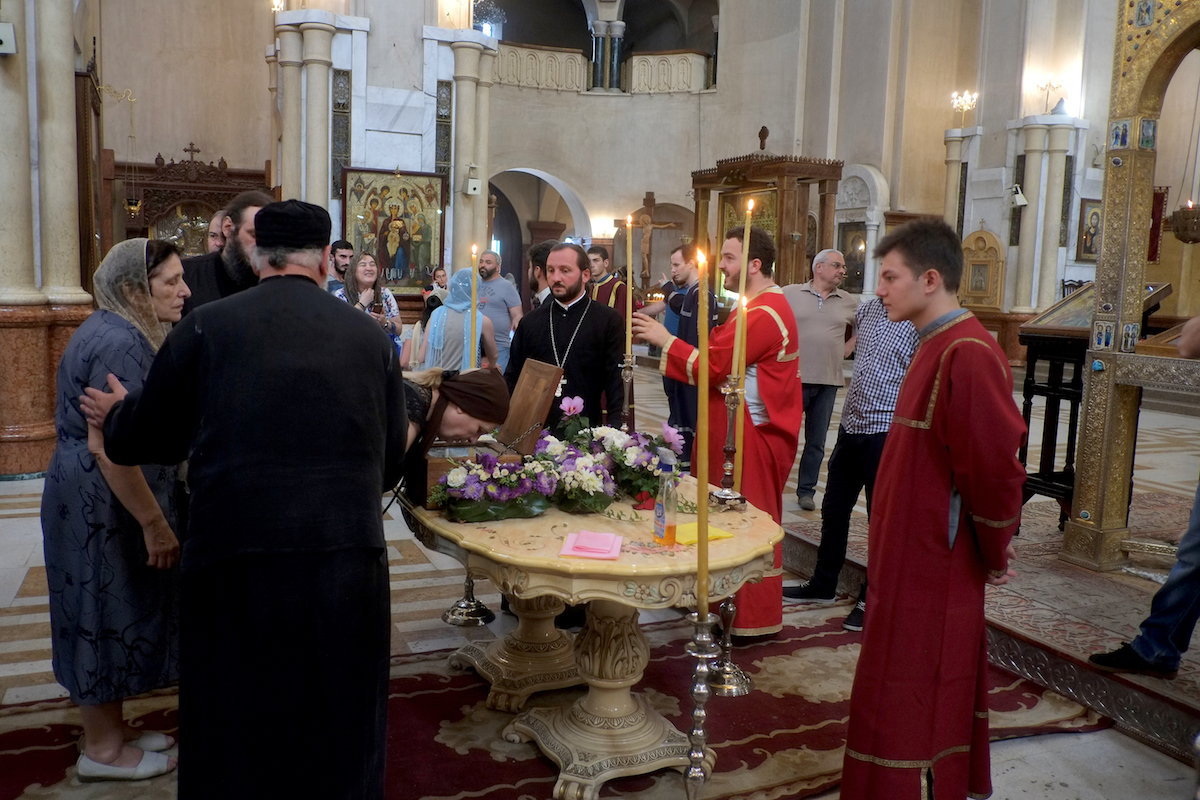 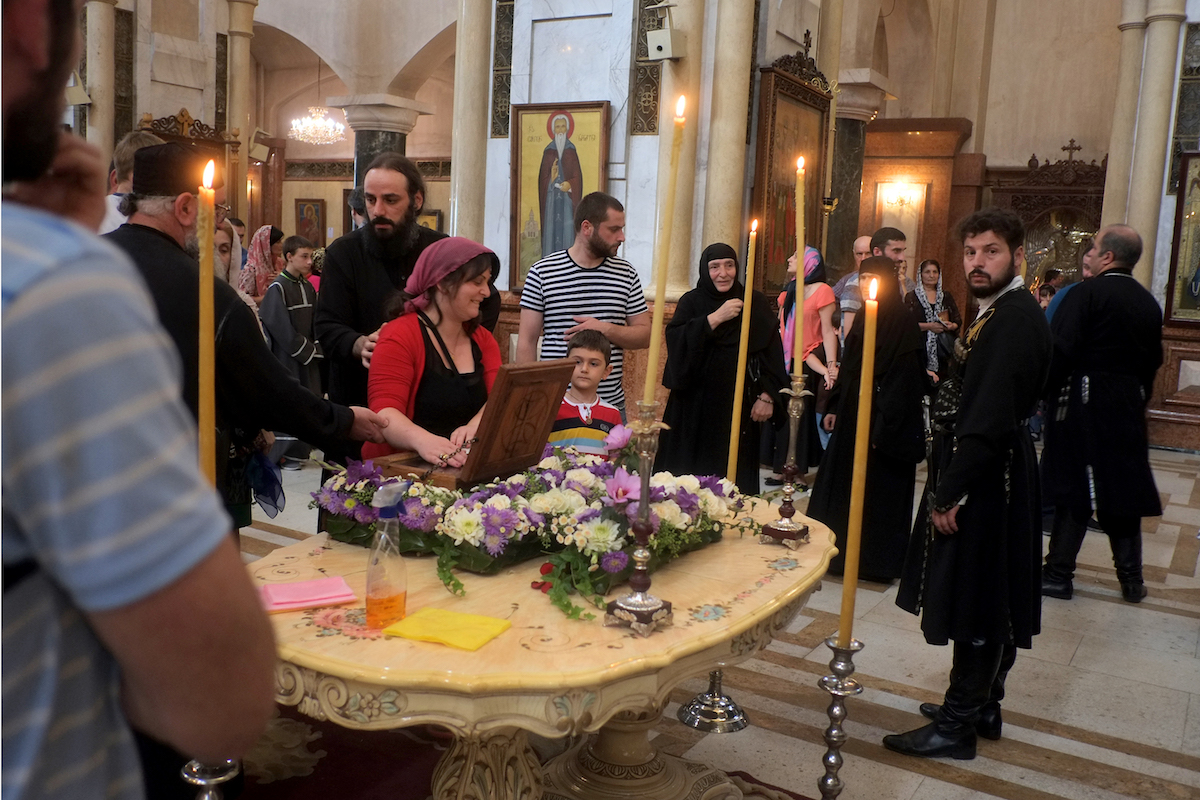 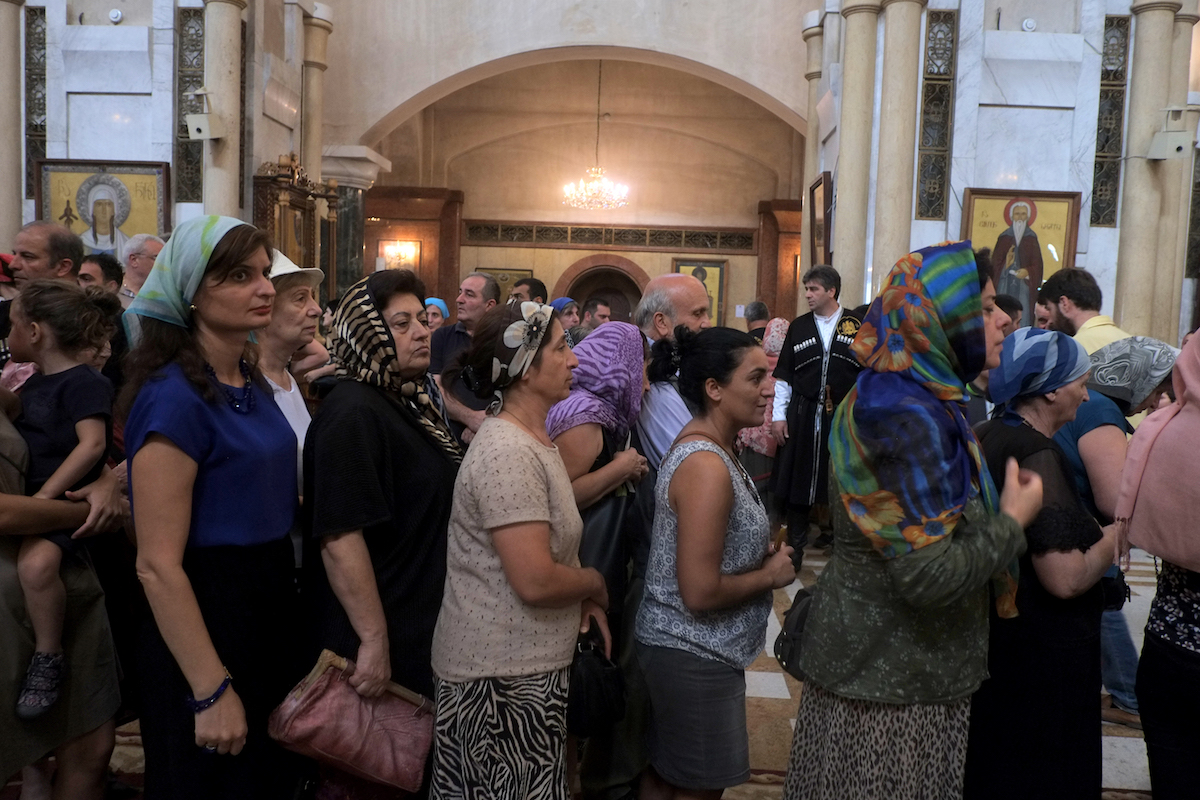 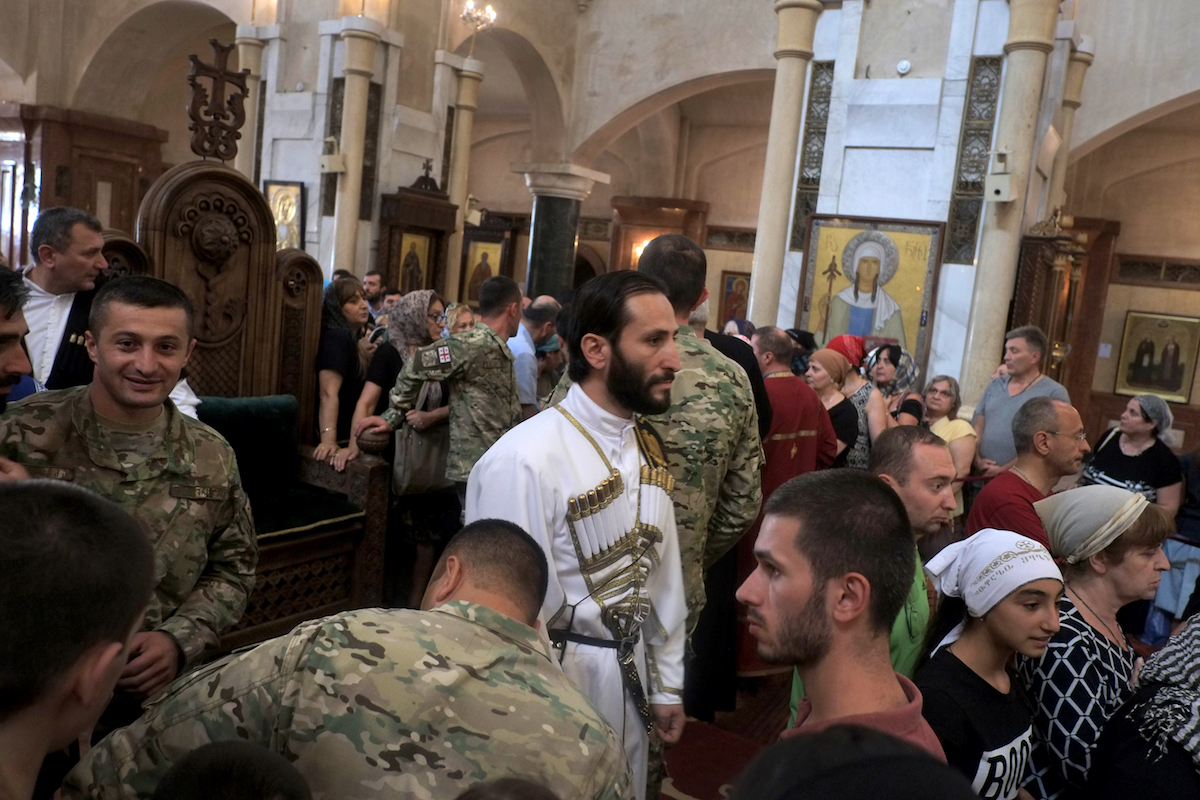 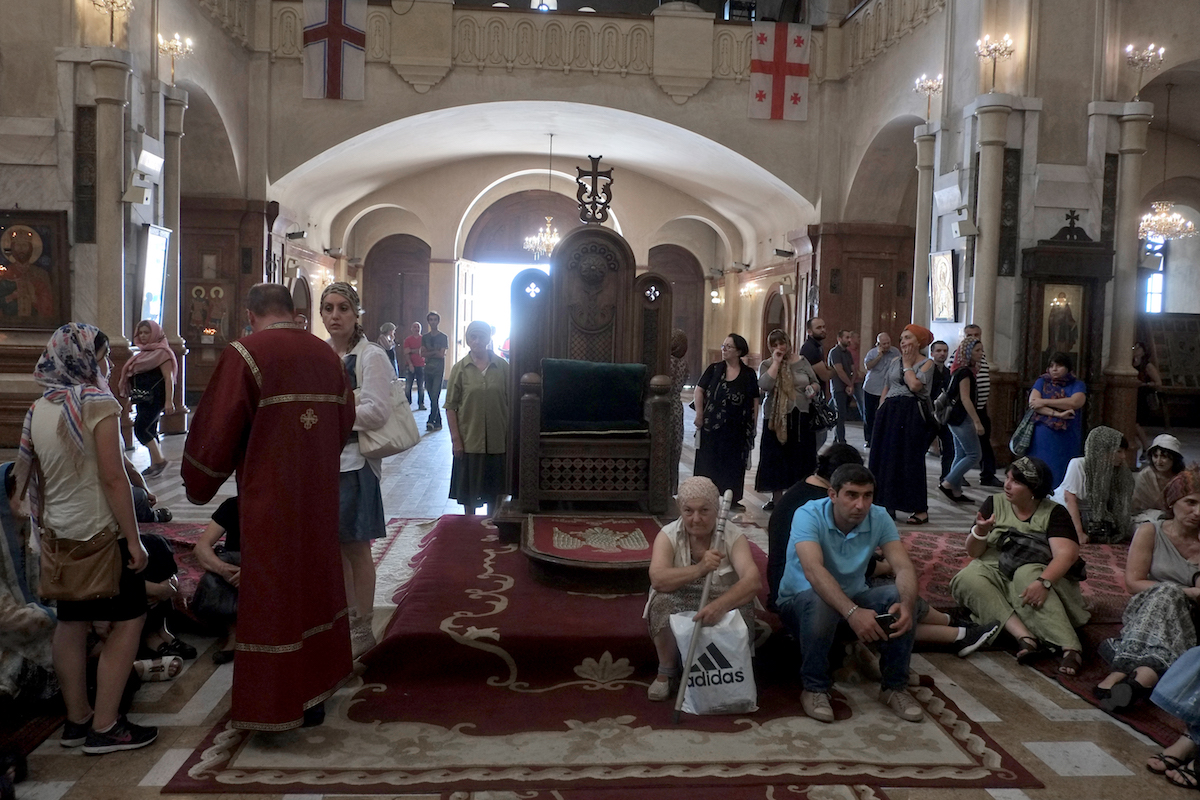 It first became known that the remains of the Georgian Queen Ketevan had supposedly been discovered under the ruins of a church in Goa, India, in 2013. An article appeared in the popular ARCHAEOLOGY magazine which featured a part of a humerus bone that was found in a stone sarcophagus. DNA analysis showed that the bone was not of Indian origin but of Georgian origin, and also likely belonged to Queen Ketevan.

According to historical sources, the Iranian Shah, Abbas, kidnapped Ketevan, the queen of the Eastern Georgian Khaketian kingdom. She refused to convert to Islam and join the shah’s harem, and was subsequently tortured to death. After her death, Christians spread parts of her body around the world. The Georgian Orthodox Church later declared Ketevan a holy martyr.

On 20 September, holy relics of Queen Ketevan were brought to Georgia, where they will remain for six months, and then be returned to Goa. The holy relics will first be located in the Holy Trinity Cathedral, then a tour around different regions has been planned. The National Museum will also host an exhibition, and an international conference.

Money from the budget

The funds used for the delivery of the holy relics of Queen Ketevan, and their countrywide transportation, have come completely from the state’s budget. According to a statement made by Prime Minister Kvirikashvili, 342 000 Lari (USD 138 000) was allocated from the budget for these purposes.

However, some members of the public believe that the state should not finance the delivery of holy relics in the first place as the church is rich enough. It would not be difficult for it to find that much money (the Orthodox Church receives twenty-five million Lari from the state annually). Besides that, it violates the principles of secularism and neutrality of the state in relation to the church, since the state budget is formed from taxes paid by all, not only by Orthodox Christians.

Representatives of the church, as well as authorities, believe that the presence of the relics of Saint Ketevan in Georgia is a historical moment, from both a religious and national point of view.

Therefore, financing it from the state budget should not be surprising. “The state helps the church, which is important for strengthening its civil position and for national consolidation,” said Mikael Botkoveli, Secretary of the Catholicos-Patriarch of Georgia in a conversation with JAMnews.

Theologian Beka Mindiashvili sees another important problem in the worship of remains and holy relics. In his words, from a theological point of view, this is wrong and contradicts Christian evangelical knowledge. Additionally, Mindiashvili sees political motives in the state’s behavior. “This is another theatrical gesture of active Orthodoxy by authorities before the election,” said Mindiashvili.

According to him, a long-standing political tradition has continued and this time authorities are trying to attract voters by playing on religious sentiment (local elections will be held in Georgia on 21 October).

“This always happens before elections. Authorities begin to prove how Orthodox they are, how faithful the church is… they start to pray publicly in the presence of media,” says Mindiashvili.

Botkoveli believes that the financing of religious events by authorities should not surprise anyone: “Orthodox Christians constitute the majority of the people in Georgia, [thus] allocating government resources is the correct step.”

The worship of saints’ graves and holy relics in Georgia is no new phenomenon. The largest and most memorable event in this aspect occurred three years ago at the grave of the monk Gabriel. In 2014, there was a rumor among worshipers that a nun from Samtavro monastery, Mother Paraskeva, had a vision.

The monk Gabriel appeared to her and said that everyone who visits his grave before Christmas will have two wishes granted. This information, which was spread over many media sources, was taken seriously by many people. Throughout the week, thousands of people visited the grave of the old man in Mtskheta, having to stand in huge queues. During this time, massive traffic jams formed on the road between Tbilisi and Mtskheta.

A specially mobilized patrol couldn’t even help the situation. People were standing in the cold, under the open sky, with babies in their arms. The Patriarch reassured believers in a special statement that the soul of father Gabriel would take care of them after Christmas, but Mother Paraskeva stated that she had no such vision.

The processes associated with the delivery of the relics of Queen Ketevan to Georgia has stirred up a discussion among citizens about the role of the church in the life of the country. Some of the public believes that the majority of the population can easily be influenced by religious fanaticism, which often comes close crossing a dangerous line, and that the patriarchate still has a shockingly large influence on authorities.

The Georgian church is one of the most influential institutions of the country, as 83% of the population considers themselves Orthodox Christians [according to the 2014 census]. The head of the church, Catholicos-Patriarch Illia II, is the most trusted public figure according to sociological polls.

“Such an attitude towards the dead, to martyrs, and their remains, is characteristic of traditional, conservative religious groups,” says Mindiashvili. According to him, where levels of education are low, the phenomenon of worshipping materials and objects appears, and authorities take advantage of this situation:

“Where there is a lack of a liberal-democratic political culture, authorities need an additional resource for mobilization. The best tool for this is religion, and manipulation of people.”

In the church, however, they believe that the worship of holy relics is normal, and criticising believers offends their religious beliefs.

“We worship holy relics. The opposite opinion signifies the degradation of thinking. This is a purposeful campaign against the church, which serves to weaken this institution,” said Botkoveli.

The relics of Ketevan will go from the Holy Trinity Church to the Alaverdi Monastery in the Kahketi region, and from there to other regions of Georgia.