He and his supporters have already left Odessa and are setting up a new party in Kyiv. Videos and photo" />

He and his supporters have already left Odessa and are setting up a new party in Kyiv. Videos and photo

This video tells in a few minutes about 1,5 years of Mikheil Saakashvili’s activity as the Head of Odessa region in Ukraine. He left his post on November 8, stating at a scandalous news conference that he would keep struggling for a victory over corruption in Ukraine.

“We are starting a radical change of power in Ukraine, with this slogan MikheilSaakashvili and his supporters in Ukraine have launched a process of setting up a new party – ‘Rukh of New Forces.” 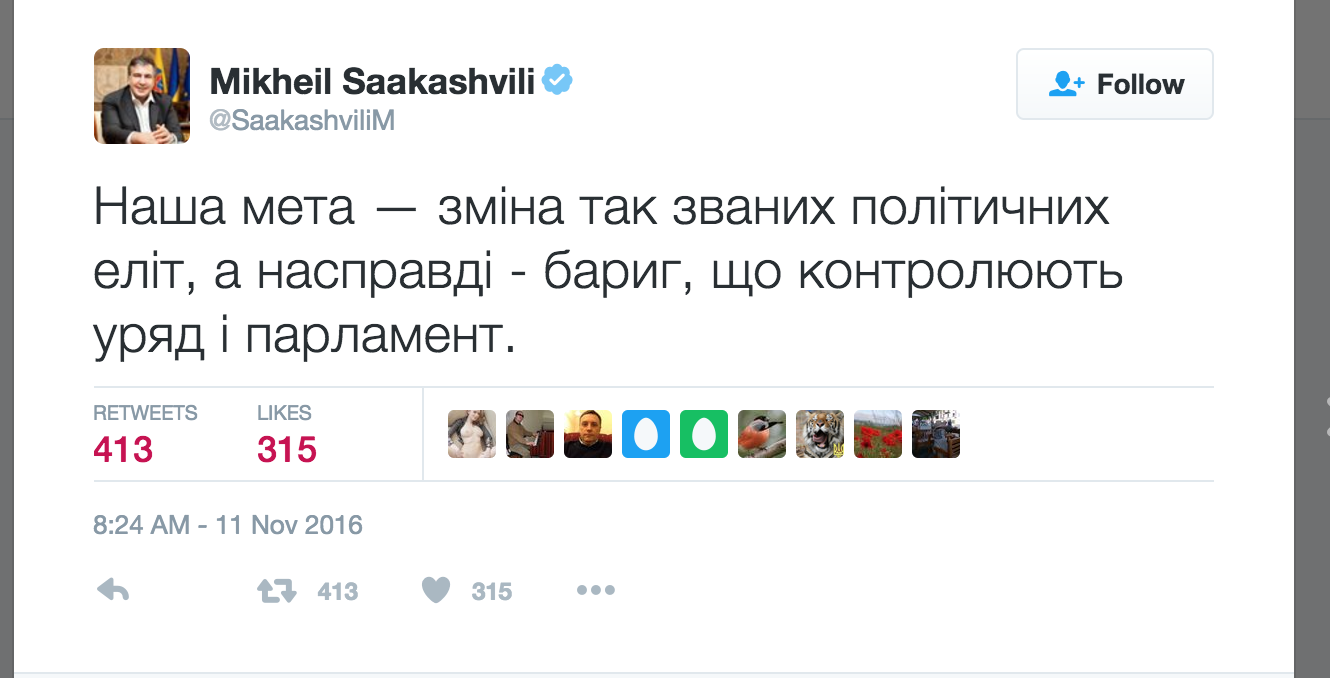 The new movement’s boar has announced about holding its open meeting in Kyiv on November 27. All residents of Ukraine have been invited to participate in the event. Throughout the week, the movement activists have been distributing in Kyiv streets the red leaflets with information about the ‘Rukhof New Forces’ and an invitation to join the meeting.


Saakashvili unveiled the details on how the new party was going to ‘bring new people into power in Ukraine’ during a recent live broadcast through his Facebook page.

“Many people offered their finished batch rename – they sincerely want to help. We don’t want to follow that path. I think that we will achieve the registration of the political force and its further development, David Sakvarelidze, one of the leaders of the ‘Rukh of New Forces told Interfax-Ukraine news agency.

In early November, Sakvarelidze resigned from the post of Deputy Prosecutor General of Ukraine. Mikheil Saakashvili commented on his resignation as follows: “Now the corrupt and scoundrels of all stripe can celebrate the victory.

Until then,Sakvarelidze was the prosecutor of Odessa region (see the detailed information below).

“The leaders of a newly setup ‘Rukhof New Forces’ are going to register their political party with the Justice Ministry, rather than rename the existing one, said Sakvarelidze. He stressed that many progressive political forces in Ukraine are welcome to join the new party or to partner with it.

The new movement’s boar has announced about holding its open meeting in Kyiv on November 27. All residents of Ukraine have been invited to participate in the event. Throughout the week, the movement activists have been distributing in Kyiv streets the red leaflets with information about the ‘Rukh of New Forces’ and an invitation to join the meeting.

• Giorgi Lortkipanidze, Police General, was the Deputy Minister of Internal Affairs of Georgia duringMikheilSaakashvili’s presidency. In June 2015,Ukrainian President, Petro Poroshenkogranted Ukrainian citizenship to Lortkipanidze, as a person, who ‘is in the national interests of the state of Ukraine.’ In that same June 2015,Lortkipanidzewas appointed the Chief of Odessa MoIRegional Department. During the following year and a half in office, he supported Saakashvili’spursued policy in Odessa.

On November 7, 2016,Lortkipanidze announced about his resignation from the aforesaid post, saying he could no longer work in the police under the existing system. A decision of the certification commission in charge of selection of policemen in Odessa, to dismiss 400 police officers, was named as the main reason for Lortkipanidze’s resignation. Meanwhile, the staff shortage makes over 1,000 people.

Another prosecutor was appointed in Odessa. Following those developments, the ‘anti-prosecutor Maidan’ had been arranged outside the Odessa Prosecutor’s Office for nearly 6 months. A new prosecutor resigned, theMaidanfinished and Sakvarelidze announced about setting up a new political party in Ukraine.

· Alexander Borovik, an economist, served as First Deputy Minister of Economy of Ukraine since February 2015. In May 2015, he resigned due to a conflict with Prime Minister,ArseniyYatsenyuk, and was appointed the Vice-Governor in Saakashvili-led Odessa regional administration.

In October 2015, he was nominated for Odessa Mayor’s post from ‘Petro Poroshenko’s bloc’, supported byMikheilSaakashvili. Having lost the election, Borovik became a member of the municipal council, but he resigned in May 2016, after the Law on Public Service, under which public officials in Ukraine could have only one, Ukrainian citizenship, took its effect.

Unwilling to give up his German passport, Borovik became ‘Saakashvili’sadviser’on a voluntary basis. However, he completely disappeared from the information field.

• Maria Gaidar. In July 2015,Saakashvili invited Maria Gaidar, a Russian citizen anda daughter of Russian reformer,YegorGaidar,for the post of vice-governor of Odessa region on social issues. In August of the same year, Ukrainian President, Petro Poroshenko, granted Gaidarthe Ukrainian citizenship under the condition that she would give up on her foreign passport. Some time later, Maria told mass media,she had submitted an application renouncing Russian citizenship. As a result of October 2015 elections, Gaidar became a member of the Odessa Regional Council, holding concurrently the MP post and the Deputy Governor’s position.

In May 2016, after the Law on PublicService took its effect (under which the public officials in Ukraine could have only one, Ukrainian citizenship), Gaidarfiled resignation from the Vice-Governor’s post, saying,she would continue working as Saakashvili’s adviser. Since summer 2016, Gaidardisappeared from Odessa information field.

In its publication entitled ‘WHO IS Mr. Saakashvili in Odessa’,JAMnewsreportedin detail on the political twists and turns in Ukraine, associated with the name of Mikhail Saakashvili

Thousands attended the meeting in Kiev on November 27. Photo by Ukrainskaya Pravda
When Teresa the cow cries
AIDS in Georgia: 10 facts