Structure of the meeting

The first 40 minutes of negotiations on the settlement of the Karabakh conflict were held with the mediation of the OSCE Minsk Group co-chairs, while a personal meeting between Pashinyan and Aliyev lasted two hours.

Then the co-chairs of the Minsk Group again joined the negotiators.

There was no media statement after the meeting.

Ilham Aliyev left the Vienna Hotel Bristol without answering journalists’ questions, while Nikol Pashinyan responded to one question from TASS.

“The meeting went alright,” he replied curtly to the journalist.

He then went to meet Austrian Chancellor Sebastian Kurtz.

A little later, the co-chair of the OSCE Minsk Group from France, Stefan Visconti, called the meeting of Pashinyan and Aliyev “long, meaningful and effective”. 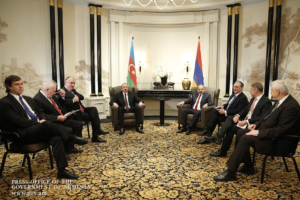 He also said that the mediators are already waiting for the next meeting, which will take place in the ‘near future’.

Pashinyan’s assessment of the talks

Later that day, Nikol Pashinyan met with the Armenian diaspora of Austria and stated that he appreciates the fact that negotiations are being held again.

Pashinyan says that for the first time, the negotiators did not think about completing the negotiations as a ‘winner’ or ‘loser’. They listened to each other’s opinions, noted that there ‘is something useful in the position of the other side, although they remained with their own [opinions]’.

Later in an interview with RIA Novosti, Ilham Aliyev said that the meeting was held in a positive and constructive atmosphere and enabled the parties to clarify their positions.

He stressed that the format of the negotiations remains unchanged, and that the leaders reaffirmed the need to strengthen the ceasefire and improve the mechanism of direct communication.

Have Pashinyan and Aliyev met before?

Up until now, Pashinyan and Aliyev had met several times in informal settings. However, during these unplanned meetings, the parties were able to agree on establishing a calmer situation on the line of contact.

It was then that Armenia and Azerbaijan also decided to work out mechanisms and establish operational links between the parties to the conflict.

However, the Armenian Prime Minister noted at the time that heir meetings with the President of Azerbaijan could not be considered the beginning of the negotiation process, since they only clarified their positions and tried to specify the subject of future negotiations.

The foreign ministers of Armenia and Azerbaijan managed to hold several meetings, during which the OSCE issued a statement on the need to prepare the peoples of the two countries for peace.

Situation on the eve of the meeting

Immediately after being elected prime minister, Nikol Pashinyan announced his position on the negotiations, and said Nagorno-Karabakh must return to the negotiating table.

The Azerbaijani side does not agree with this, although a cease-fire document was signed in 1994 by the Karabakh party, which indicates its participation in the first stage of the negotiation process.

The negotiators, the OSCE Minsk Group co-chairs, in a recent statement called for refraining from unilaterally changing the format of the negotiations.

Responding to this statement of the co-chairs, the Armenian Prime Minister confirmed the invariance of his approach:

“The fact is that today at the negotiating table there is no legitimate, authorized representative of Artsakh … I have repeatedly said that the Prime Minister of Armenia does not have such powers … And this is not a whim, not a precondition, but a question of legitimacy. […] comments that the Republic of Armenia or the Prime Minister are absolving themselves from this responsibility are absurd … The Republic of Armenia was, is and will be the main guarantor of the security of Artsakh and will continue to participate in the peace process.”

Another important statement was previously voiced by the Minister of Defense of Armenia. David Tonoyan, who noted that should hostilities in Karabakh resume, Armenia is ready to move from a defensive to offensive tactic:

“The psychology is changing, approaches are changing, as defending armies always fail. We are not going to remain in a defensive position,” the minister said.

What’s become of the thousands of refugee families near Karabakh?

Vaccination of Azerbaijani citizens over 18 begins