Residency permits for Georgians in Abkhazia: a problem or a solution? 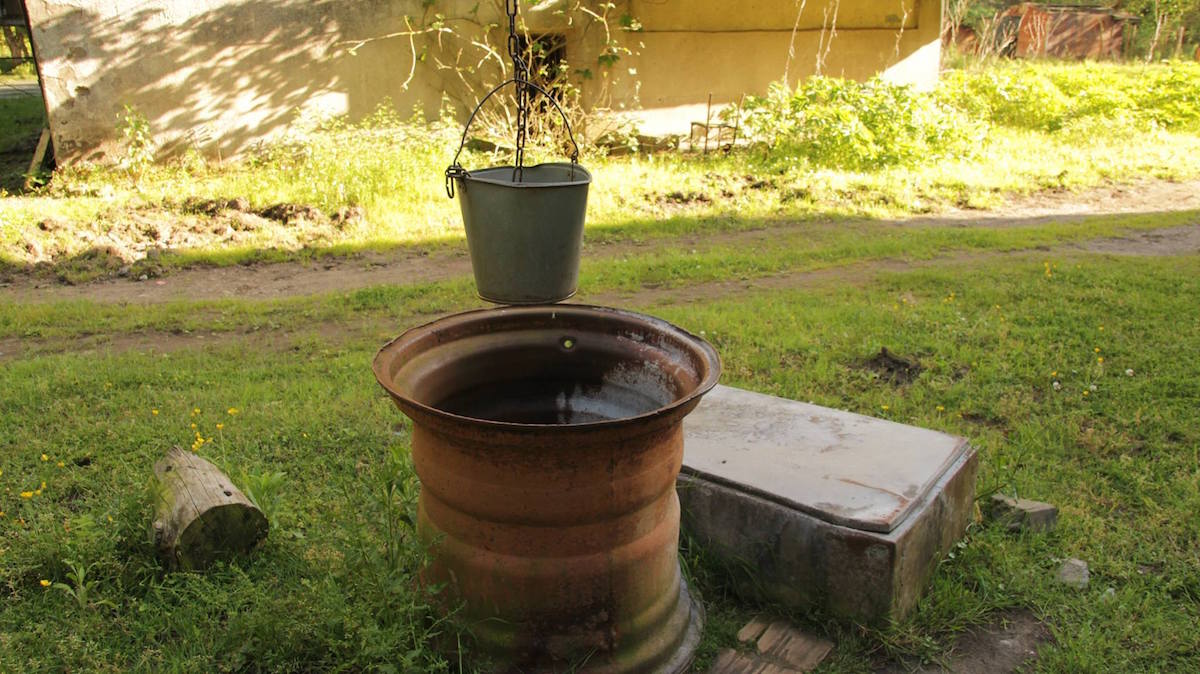 In the district of Gal in Abkhazia, large and long-awaited changes have been made which affect the lives of some 30 000 people. In order to understand their significance, one has to first know the complicated context of this place.

Practically one-hundred percent of the population of the Gal district are Georgians, and this makes the region very problematic in Abkhazia. Abkhazia positions itself as an independent state with the support of Russia, while Tbilisi insists that Abkhazia is a part of Georgia, and this demand for its territorial integrity is supported by the UN, the European Union and other Western countries as a whole.

Georgians living in Gal district have been ‘locals’ in the region for centuries, and they even have a name for themselves: the Samurzakan. However, they are Georgians and, though maybe not all of them, many of them have close ties with Georgia and have Georgian passports.

The big events that we would like to discuss are connected with the issue of passports. 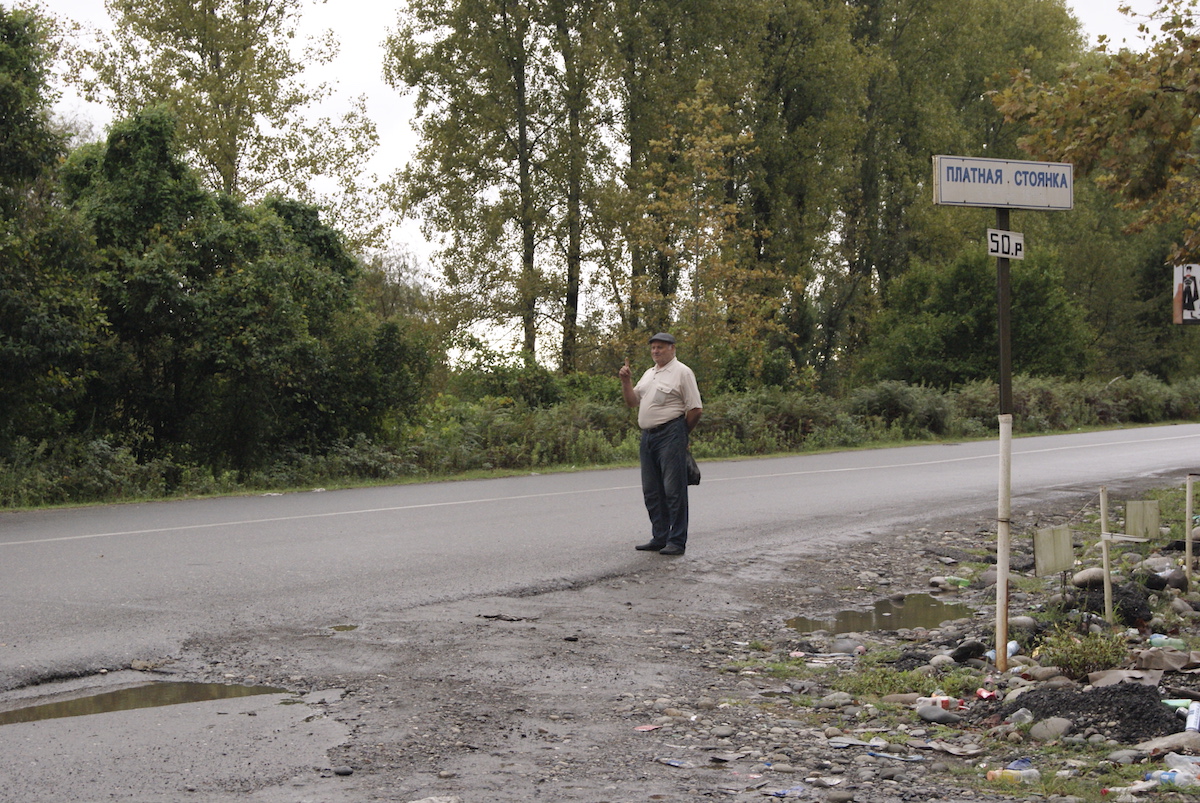 Of   the 30 000 people living in Gal, only around 300 of them have Abkhaz passports. The rest of them are practically illegals. They have Georgian citizenship and they don’t want to give it up – which means that they can’t receive Abkhazian citizenship, because double citizenship in the republic is only recognized for those with Russian passports.

It has been years now that there has been discussions in Abkhazia on how to solve this issue. Many believe that it is the ‘Gal issue’ that led to the premature departure of the former president of Abkhazia, Aleksandr Ankvab.

[su_quote]Special commissions to distribute passports to the population of Gal district were organized which was in violation of the law. Passports were given out which trampled the existing ‘Law on citizenship of the Republic of Abkhazia’ – a detailed analysis of the problem of passports for Georgians in the Gal district of Abkhazia. [/su_quote]

After a debate which went on for many months, the parliament of Abkhazia passed a final solution: the life of the Georgian enclave was legalized with a document called a ‘residence permit’.

Distribution of the residency permits began in June of 2017. In the past 2.5 months, the statistics are:

The city of Gal, the passport department of the Ministry of Internal Affairs of Abkhazia (MIAA), Thursday. On this day, it is not possible to visit the offices of the MIAA. However, in a little compartment near the doors of the passport-visa service area, about 15 people are gathered in to something that resembles a line. 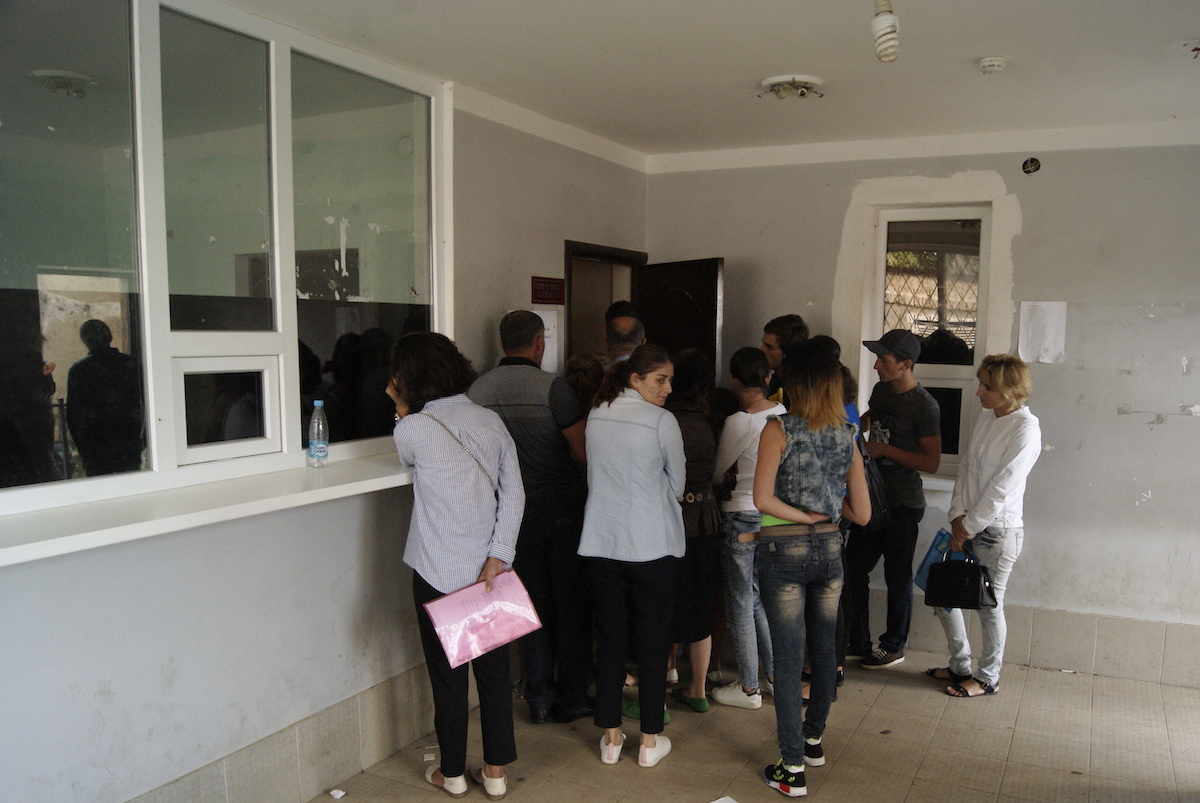 Another one gets in line, and takes a look at the line. Then he goes to read the lists of those who have applied for a residency permit, which have been affixed to the wall. He finds his last name, and goes out onto the street to wait where he says one can at least have a smoke.

The rest begin to make noise, because someone wants to pass without waiting in line. A woman insists that she needs to hand over a document, and a worker from the passport department appears and takes several people inside, including the woman and her document. 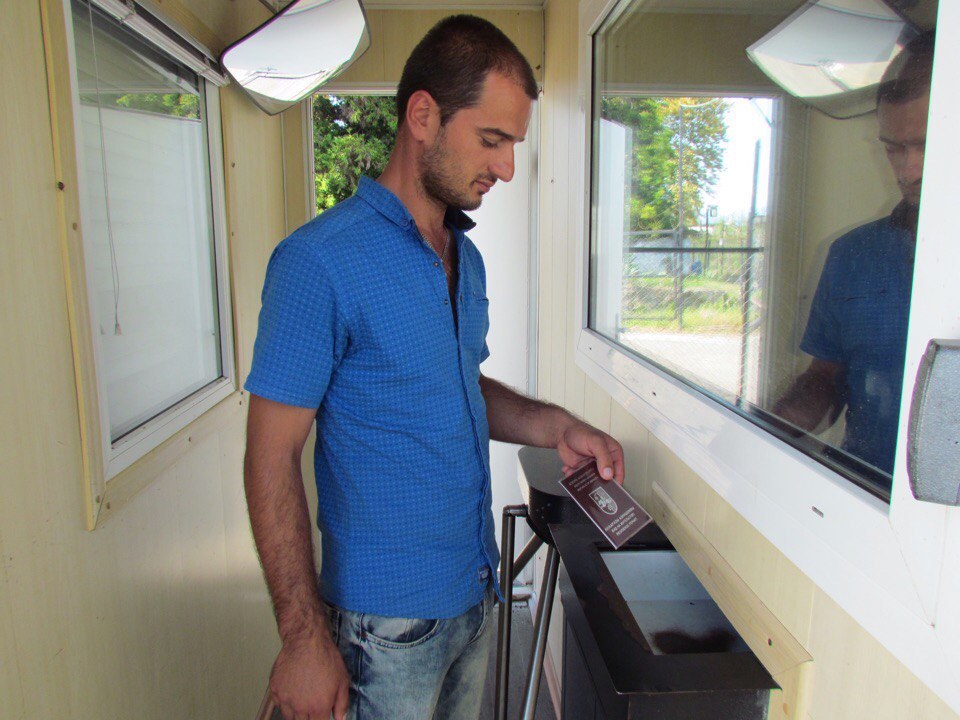 In order to receive the residency permit, one must provide quite a few documents:

Local police lieutenant Tatyana Chistyakova says that it is difficult for many to gather these documents, and at times costly. One has to go to a laboratory, do analyses, pay for the certificate and documents, and then go again to receive them.

For that reason, Chistyakova says, for those that were born in Gal district a more simple process was thought up. But for the rest, everything is very difficult.

“Here we have a family of four. They were all born in Georgia, but they lived their lives in Abkhazia. Their case is currently in a ‘suspended condition’. And then there are families in which all the members, with the exception of the father, were born in Georgia, but because he’s local, the rest of them also received a residency permit,” she says.

Border crossing on the Ingur river border with Georgia

And here there is also a line, but a more formal one. In people’s hands, one can see both Abkhaz and Georgian passports as well as other documents. The border guards say that throughout the entire day only five people have gone through who had residency permits.

On the side, a man is standing with two children. He has a problem. His daughter has just turned 15 and her only document is a birth certificate, which can only be used as a form of ID up to the age of 14.

“And how are you supposed to get [her] a residence permit?” we ask him. The man shakes his head.

“No,” he firmly says. “And I don’t plan on getting one. It’s better that I live without these documents. My predecessors lived here their whole lives, for generations. We have our own cemetery here. What residence permit do I need?”

In the end, he was sent back to get ‘form number 9’. The border guard said that if he’s lucky he’ll be able to get the document and cross over.

He was lucky: not even an hour later he was at the post and this time he successfully passed through the checkpoint and moved on with his daughters.

Will they let us through or not?

Several local residents with whom we spoke said that they already have a residency permit, but at the border crossing point they were asked to present their Georgian passports as well.

We formed the impression that people who have the residency permit don’t know about this rule and for this reason they react cautiously.

However, this line is filled and based on the report of one individual alone, as it is impossible to check whether a person in Gal has a Georgian passport or not, and the Ministry of Internal Affairs of Abkhazia does not have such a database. 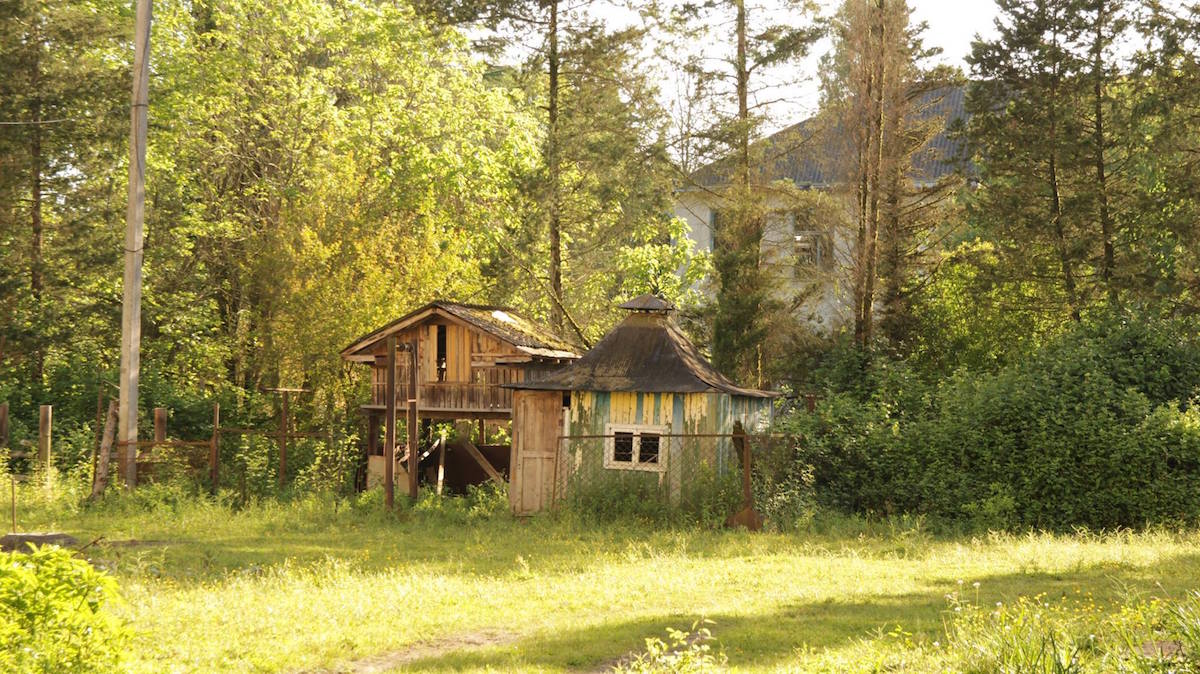 From 30 April through to 30 August 2017, only 27 Abkhaz citizenship passports were issued in Gal district . Of these, 23 were replacements for old passports.

“In order to receive an Abkhaz passport, one has to give up one’s Georgian citizenship, and throughout history there has only been one such case,” says Chistyakova. “This was in 2008, she was Russian by nationality, her husband was Georgian and she tried and waited for an entire year until they finally deprived her of Georgian citizenship in Tbilisi.”

Chistyakova said that she knows of cases in which several local, ethnic Georgians went to Tbilisi to renounce their citizenship, but they were threatened with imprisonment.

Local residents did not want to discuss this topic with JAMnews.

The problematic sides of the residency permit

“The authorities think that they have solved the problem of the residents of Gal district. However, the residency permit isn’t quite enough for people, and it creates many limitations for them. And until the rights of those people who possess this document are expanded, it probably won’t be asked for en masse,” says a lawyer from the Center of Humanitarian Programmes, Said Gezerdava.

[su_pullquote align=”right”]“It is possible that these problems are temporary. But until a differentiated approach will be employed for the residents of the Gal district, it is difficult to expect any real solutions to the problem“ [/su_pullquote]

“Residents of the Gal district had these rights up until 4 April 2014 when Parliament approved of the law on “streamlining the process of ‘passportization’ of the population of the Republic of Abkhazia” Gezerdava told JAMnews. 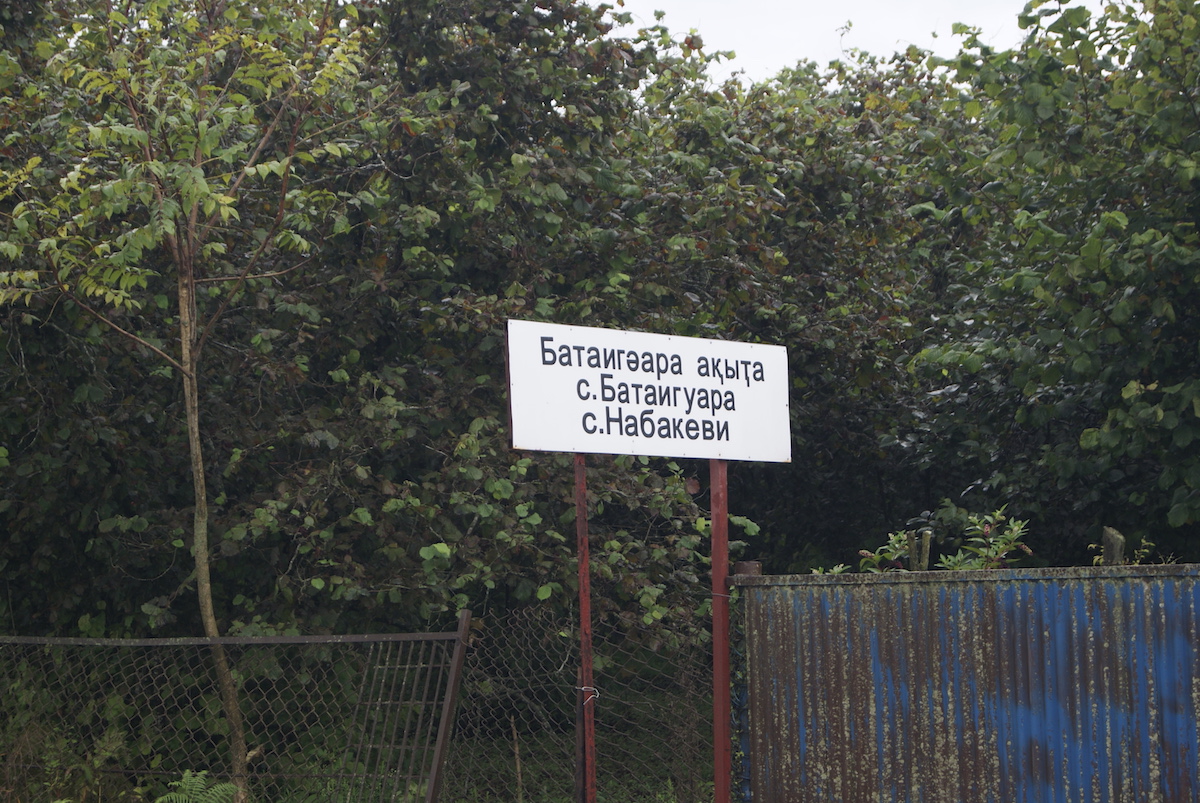 A woman asked us not to use her name, as did everyone else to whom we spoke to in the Gal district. But she did agree to tell us her story.

The story was typical – she was born in Georgia, lived her entire life in Abkhazia in the village of Bataiguara, which up until recently was named Nabakevi, and residents still call it that to this day. She has a Soviet passport and a now-annulled Abkhaz passport.

“I received this passport during the times of Bagapsh [2010-2011], and then it was voided. In my family, no one has documents. My mother is Abkhaz, but she doesn’t have Abkhaz citizenship, because she doesn’t know the Abkhaz language. And I’m a native resident as well, but I have an old USSR passport, and there it is written that I am a resident of this village,” she said.

She knows about the new legislation and the residency permit, but she hasn’t applied for one. She said that it appears to be very difficult, though she didn’t explain why exactly she thought it was difficult.

According to her, the majority of the village is waiting it out, as they are unsure how they should proceed.