Protest march against violence against women in Baku: rally held despite police efforts

An unauthorized rally against violence against women has been held in Baku.  At first, the police harshly dispersed the rally, but some participants were eventually allowed to reach the end of the route. 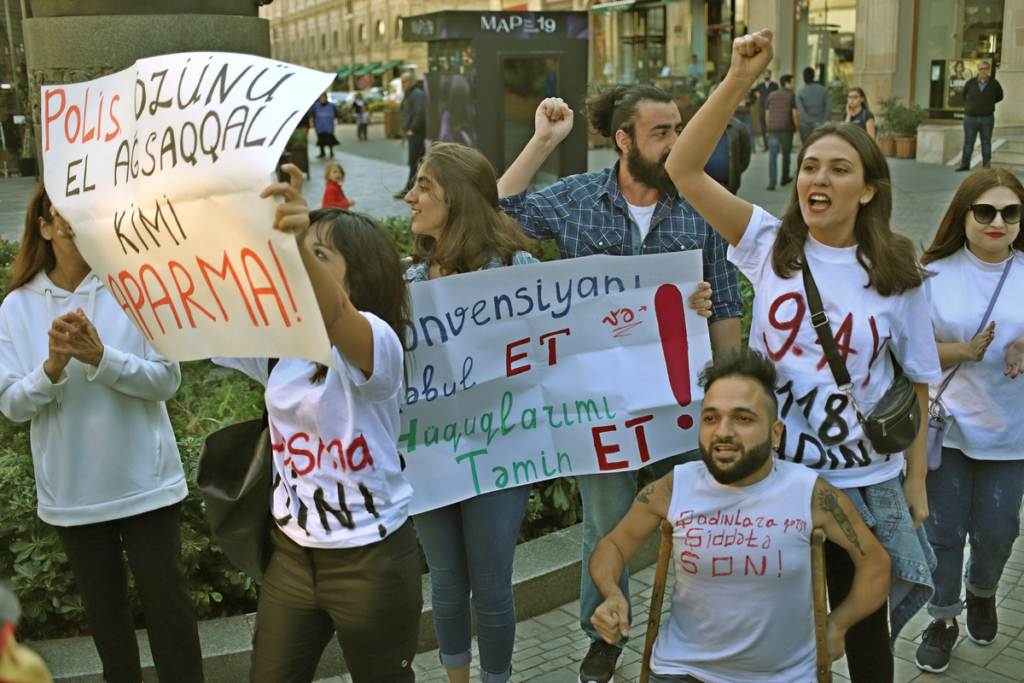 The reasons for the rally

In early October, in Baku, a man killed his wife during a quarrel.  He stabbed her 25 times in the street in front of her three children and passers-by.  This incident shocked everyone. A calculation of the statistics of domestic violence in recent times showed that in five days about 10 women had been killed or severely beaten.

This made social networks and media again talk about domestic violence.  A protest campaign began in social networks under the tag # QadınaŞiddətəYox (#NoViolenceAgainstWomen).  Many demanded that the state intervene and take measures.

Domestic violence is a critical problem in Azerbaijan.  According to estimates by the human rights organization Advocates for Human Rights, in one form or another, 43% of women in the country are subjected to domestic violence.

Women are battered both by her husband and other family members: fathers, brothers, father-in-law or mother-in-law.  Anything can serve as a reason for this – from jealousy to petty conflict.

Azerbaijan has a law on the prevention of domestic violence, adopted in 2010.  But in fact, it practically does not work, because even the police often consider domestic violence to be “an internal family affair.”

The rally under the slogan “Do not be wait! Join the procession” was organized by a group of activists.

The demonstration was conceived as a peaceful march – they planned to gather in the city center near the monument to the poetess Natavan and walk a few hundred meters, and at the “finish” read out a statement with their demands.  In particular, for the government to sign and ratify the Istanbul Convention, an international agreement of the Council of Europe against domestic violence and violence against women.  The Convention entered into force on 1 August 2014.  Currently, it has been signed by about 50 countries (including Georgia and Armenia).

At the same time, it was stipulated that the march would be exclusively peaceful, slogans not related to the topic of the rally were prohibited.

The organizers turned to the city authorities for permission to hold the action but they were refused, citing the fact that the rally “would interfere with the leisure of the townspeople”, and “is inexpedient.”

“That is, killing women on the street does not interfere with the leisure of the townspeople, but the march will hinder it?!” the organizers were indignant and decided to hold the rally anyway.

Events of the rally

An hour before the start of the rally, the territory around the monument was already taken under police surveillance.  Among them were female police officers, who have recently been attracted to disperse rallies specifically to detain women participants.  Moreover several police cars were waiting.

Initially, several dozen activists and about the same number of journalists stood in front of the monument.

As soon as the activists took out their posters and began to chant their slogans, the police began harshly dispersing the protesters.  About five people were detained, but released almost immediately.  Some were forcibly put on a bus.

Police pushed some of the participants to a narrow side street, thereby containing the rally.  There they were persuaded to disperse.  However, the activists nevertheless voiced all their demands.

Meanwhile, other protesters arrived at the destination with posters, and they were not chased.

On the eve of October 19, police and special forces severely suppressed an opposition rally.