Op-ed: Armenia - an example for Russia?

A new political crisis is taking shape in Russia.

At least, that’s the conclusion one can make after the first demonstration in many years in Moscow which was called for – not because of political reasons, but because of concrete measures taken by the authorities.

Around 12 000 people, mostly the youth, demanded that the authorities cease their attempts to block the Telegram messaging application and to stop interfering with the proper functioning of dozens of other sites that are not connected to it.

The main explanation of the Russian authorities and their irreconcilable battle against Telegram is the assumption that application may be used by terrorists.

There is no concrete proof so far that this is so. But the very fact that there is a war being waged on the most popular messaging application among the Russian youth, and the threats to block access to internet sites, have brought new leaders out onto the street. Young leaders, and exuberant ones.

In the video below, you can listen to and watch the speech of the organiser of the 30 April Moscow demonstration, Mikhail Svetov.

Mikhail Svetov is the leader of the Libertarian Party of Russia. He is a rather public and well-known figure on the internet. Svetov is a popular blogger who oversees a number of channels on YouTube and Telegram as well. He travels around Russia and gives public speeches.

Many of those who came to the demonstration are like Svetov – young, and offended by what they feel has been a personal attack in the war on Telegram.

It was easily observable of many of those who came to the meeting that they had come to protest for the first time. Many said that they preferred to observe the protests of the Russian opposition which, in their words, were motivated by ‘abstract ideas of corruption’ and the necessity of transparent elections in the country.

The majority of the protesters brought paper planes with them, which in the past two weeks have become the main symbol of the fight for a free and open internet in Russia. Demonstrators launched their planes continuously into the crowd.

Despite the unfortunate event that has brought about the demonstrations, protesters were joyous and in a good mood. The demonstration took place on one of the first warm days in Moscow this year.

The majority came in groups of several people. Many of these little groups loudly discussed the events going on in Armenia and said that even though it might be incorrect to compare the internal political situation in Russia and Armenia, the example of Armenia may inspire the Russian opposition which has struggled to achieve anything in recent years.

Just what’s happening in Armenia? Main players and their demands

Protesters also brought posters with a number of different slogans and demands. The main overriding theme was ‘Big brother is watching you‘. Other slogans were more specific, demanding that the head of Telegram, Pavel Durov, be elected as president of Russia.

There were no run-ins with police at the demonstration. There were, strangely, very few police officers present at the protest in comparison with other such events in Moscow. Telegram’s audience – mostly progressive youth – is not ready for conflicts with the police. They did not head towards the Kremlin after the demonstration nor did they shout their slogans there as had happened at the last demonstration by Russian opposition leader Aleksey Navalny.

He was also present at the demonstration. Usually quiet and calm, Navalny screamed from the microphone during his speech and made the impression of quite the aggressive individual. One had the impression that the protesters were not especially inspired by his performance.

The protests ended peacefully and on a high note. Many of them will probably come to a meeting being organised by Navalny against the singular reign of power in Russia on Saturday, 5 May.

Roskomnadzor, Russia’s communication agency, held a demonstration that suspiciously resembled a youth flash mob with airplanes in support of Telegram.

Roskomnadzor suggested throwing out paper balls from the windows and in so doing showing one’s support for the installation of high-quality internet services at stadiums. 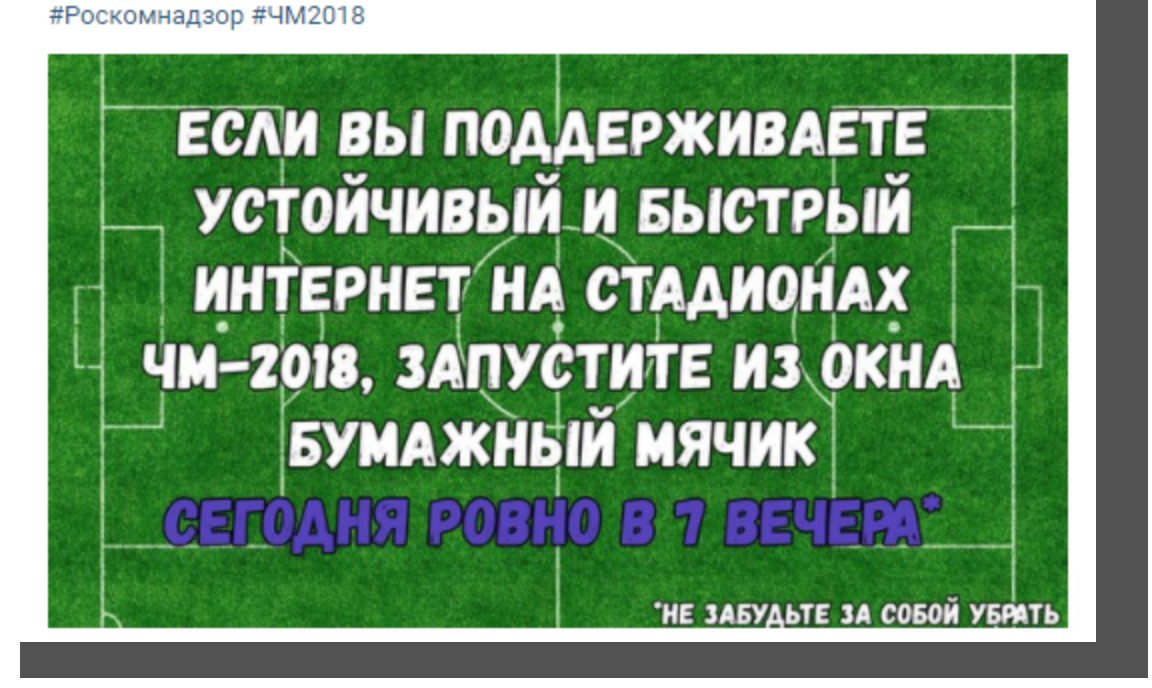 Go to top
In an attempt to limit access to Telegram, Roskomnadzor has blocked 50 anonymous and VPN services. More than 14.6 million IP addresses have ended up on its black list, about 0.4 percent of all IP addresses on the internet. The Russian Ministry of Communications now say that they may also block Viber which handed over all information on its users to Russia back in 2015.
Go to top