No Micky, no party!

To get to the World Cup. At any cost. Perhaps, that has been the task, set before the national team of Armenia ahead of the Copa Mundial 2018. It’s hard to say, how good have been the steps taken for this purpose, but the fact is that they have done something: they’ve changed a coach, the players, as well as have made some statements…

The hopes that Armenian football players would possibly participate in the world championship, which is due to be held in Russia, have became more realistic following the announcement of all members of the group, in which the team had been included: Poland, Denmark, Montenegro, Romania and Kazakhstan. Not a single heavy favorite, by and large.  But how it happen so that such a modest football country like Armenia decided to get to such a serious international tournament?

Leaving aside the national team’s failures at Euro 2016, Armenia looked much better at two previous qualifiers. It was a new team of young football players, backed by representatives of the older generation, eager to support the newbies both, on the field and beyond it.

However, Euro 2016 has had a scandalous final in Armenia. Some accusations have been voiced against several football players, including Yura Movsisyan, Gevorg Kasparov and Robert Arzumanyan, who were simply disqualified from the national team.

Ruben Hayrapetyan, the president of the Football Federation of Armenia (FFA) stated, he suspected some of the national team players of ‘betrayal’. The matter concerns an ill-fated match with Albania, when the Armenian football players ignominiously finished Euro 2016 qualifiers on their own field.

“We should put an end to betrayal. The match with Albania was a great defeat and disaster for us. We should subject the culprits to the glare of truth, otherwise we won’t achieve anything, Hayrapetyan took it out, allowing others to ‘revise their activity in the national team.

That certainly wasn’t the best atmosphere for accepting and overcoming new challenges. However, Varuzhan Sukiasyan, a newly appointed coach, assured that he could achieve the ‘result’ from what he had at his disposal.

Henrikh Mkhitaryan, the national team’s new captain, is certainly a factor that cannot be overstated. In the popular world football phrase, equally as there are good and bad football players on the field, there are also those, who can ensure ‘a positive difference’ for their club and squad. For the Armenian national team it’s Henrikh Mkhitaryan: he can really ensure the ‘difference’ alone. 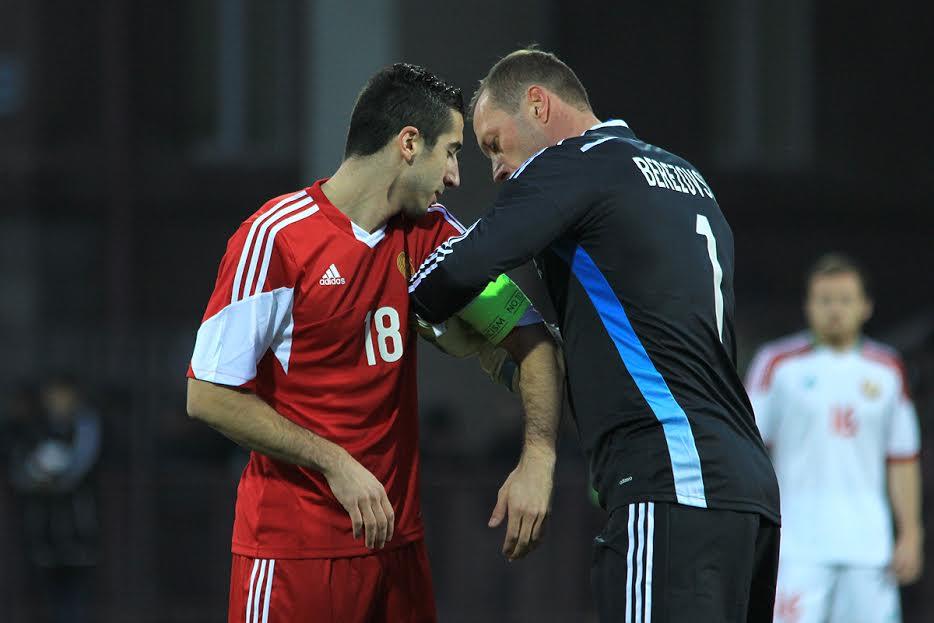 This year has been promising in this regard. At first, the national team didn’t fail in the pickup games. Moreover, it twice secured the lopsided victory as part of the lengthy football combine in the USA, first defeating the Guatemala national team (7:1) and then Salvador (4:0).

However, when a crucial moment came and it was necessary to take up the struggle, it all went pear-shaped. A nightmare began during a pickup match against the Czech squad. Henrikh with his captain’s armband seemed to be the only one, who realized in what direction to take the game to.

It was obvious to both, the rival and the chief referee, who served the match: the latter gave out yellow cards to two Czech football players, who set the rules at naught with regard to Mkhitarian twice during the first 30 minutes of the match.

After the second violation, it became evident that Mkhitaryan would be unable to continue the game. He left the field and the fans’ hope for a game-change abandoned them. As a result, the national team had been beaten all hollow (3:0) long before the beginning of the qualifiers. Whereas a few days later, it became obvious that Henrikh wouldn’t be able to help his team in away match against Denmark.

What happened at Parken stadium is simply beyond the words. The coach, who in his interviews had always spoken for the offensive football, brought onto the field 5 nominal players. In other words, an overarching goal was set to maintain a draw 0:0.

However, a team performing with such a strategy could be hardly referred to as successful, if it’s scored a goal already at the 16th minute. Only the football gods know, how the team was supposed to play and attack with 5 five defenders afield.

Armenian national team managed to avoid higher score defeat only due to Arsen Beglaryan, the goalkeeper, who saved the situation several times. He managed to save a penalty from Christian Eriksen, as well as Poulsen’s subsequent rebound, on the 72nd minute of the second half.

It turns out that without Henrikh Mkhitaryan the Armenian national team has got nothing to do on a football field. Regrettably, even his presence wasn’t always salutary and won’t always save the situation. No matter how high-professional a football player is, even if it’s Messi, he couldn’t play alone and lead the way for the entire team, since football is the game played by 11…

Henrikh Mkhitaryan played for FC Borussia (Dortmund) from 2013 till 2016. He is frequently referred to in the foreign mass media as Micky, that’s how he was nicknamed by the fellow club members, who found it hard to pronounce his last name. Mkhitaryan joined FC Manchester United in July 2016.

Journalist and marijuana
Georgia: what is at stake?