This story has repeated itself for a number of years now for Ossetians who live in North Ossetia but were born in Georgia in villages close to the border.

Every year, on the last Sunday of every July, Ossetians celebrate an important religious holiday: Atinag (the Ossetian god of agriculture and the harvest).

It is customary for families to gather at their ‘ancestral nest’ in the villages on this holiday. Ossetians who, as a result of the conflicts of the 1990s, left Georgia for North Ossetia, and who left their homes and villages in the Truso Gorge of Kazbegi region, have tried to do this for a number of years now.

But after years of an entrance ban into Georgia, nobody even tried to go this July. 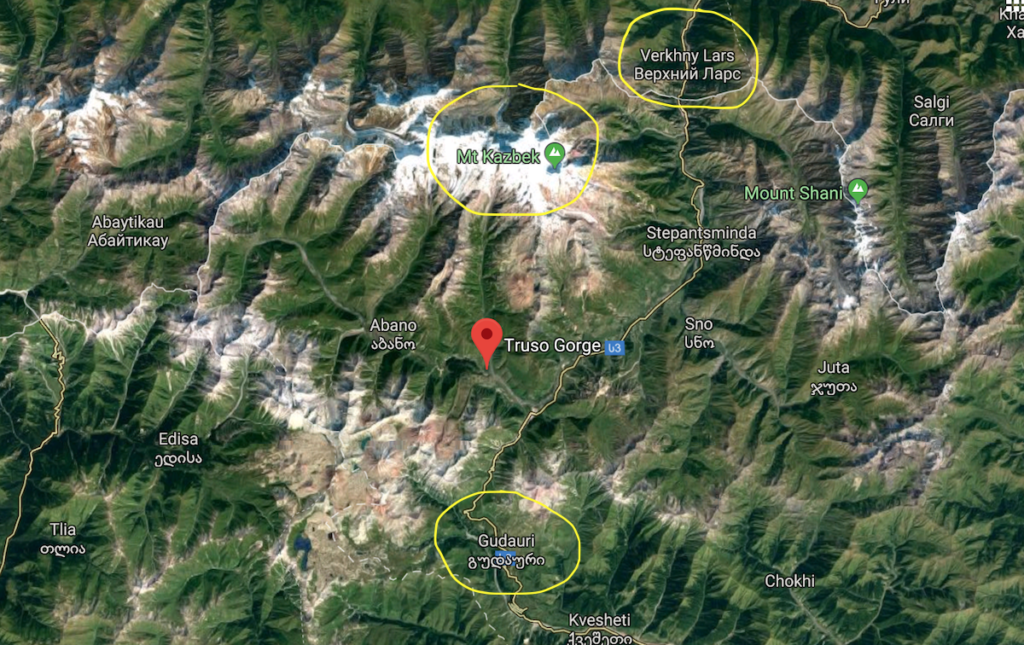 On the map one can see the location of the Truso gorge: between the border point of Verkhni Lars on the Russian-Georgian border, the summit of Kazbegi mountain and Gudauri, a Georgian resort town.

Root of the problem

Before the collapse of the USSR, there was quite a bit of activity in the Kazbegi region of Georgia. The population was partially integrated into the border region of North Ossetia, where both Ossetians and Georgians from Kazbegi and the villages preferred to spend their winters as it was the nearest municipal zone for residents of these mountain districts.

The traditional and calm way of life in the region was destroyed by politics. In the middle of the 2000s, Georgian-Russian relations took a turn, diplomatic relations were broken off and the only border crossing point on the Georgian-Russian border, Verkhni Lars, was closed.

Ground connections between the two countries were reinstated only in autumn 2010, when Georgia abolished visa requirements for Russians. In July 2010, natives of Ossetian villages in Georgia moved towards the border in hope.

More than anything else, they want to visit their homes in the villages of the Truso gorge. But there are also ancient Ossetian holy sites located in the region, including one of the most important – Taranjelos, where many Ossetian pilgrims try to visit.

However, many of them were met with disappointment.

The Georgian authorities put together a no-entry list and began refusing thousands of people access to their homes in Ossetian villages. Some were allowed in, and for a short period of time, only up to the Ketrisis [Oss. Chetyrs] and Kobi [Oss. Kob] villages.

People who were not allowed entry to their native villages on Atinag told JAMnews that they received the following explanation from border guards: the Georgian special services suspect them of having connections to the leader of the Daryal organisation, Gairbek Salbiev, who has publicly demanded the transfer of these villages and the Truso Gorge to North Ossetia-Alania. However, the individuals in question categorically denied the accusation.

In July 2017, there were quite a few who tried to spend Atinag in their native villages but was refused at the border – more than 50 people, local rights advocates say.

eventy-year-old Galina Tuaeva told JAMnews that she went to Georgia in July 2017 for the first time in 12 years. She was born, grew up, married and bore children in Bur Maesig village in the Truso Gorge.

“We set out by car on 23 July with our relatives. I couldn’t even have imagined that they wouldn’t allow me to enter. I lived my entire life in Georgia. But the Georgian border guards stopped me at the border crossing point. They asked me where I was  born, where I live now, where I’m going and why. I answered that I was going to celebrate Atinag in Kob. They asked me to wait.

“Two hours later, the man in uniform who had been questioning me came out, gave me my passport and said: ‘You are not allowed to enter Georgia’. They put a black stamp in my passport. I may never return home now.

“Apart from me, they also didn’t allow several other people in who had been traveling with me, they too were denied entrance.

“For all my life, Altinag was the biggest holiday. And now I can’t even get a glance of my home from afar, they won’t allow it. We didn’t fight with the Georgians, why are they taking our homes and land away?”

In 2018, not a single former resident of the Truso Gorge was able to make it to the region for Atinag. The authorities refused anyone from going as far as Desh village, where the holy site is located.

Gairbek Salbiev, the leader of the Daryal organisation, was also refused entry, and he told journalists that ‘Tbilisi is artificially creating problems for Ossetians on the border, and is trying to force Ossetians to give up their homeland. Tbilisi is violating the rights of the Ossetian population – their right of access to their homes, a right voiced by the UN in the Declaration of Human Rights’.

Salbiev says that during negotiations in Geneva and Prague, Russian and South Ossetian diplomats have brought forward the issues of the Ossetian population of the Kazbegi region.

Sergo Tuati, another public figure, does not agree with him. Tuati, who heads the Kazbek Ossetian-Georgian frienship organisation believes that Salbiev’s statements are provocative in nature and calls the Daryal organisation illegal, claiming it is not registered anywhere.

“First off, the anti-Georgian statements of Gairbek Salbiev affect the Ossetian natives of Kazbegi region, whom the Georgian authorities really did ban from entering their villages,” Tuati told Ekho Kavkaza in an interview.

However, Sergo Tuati is also on the ‘black list’. His entire family is from the village of Kob[i] in the Kazbegi region. His father’s home is there as well as a large garden, but he has been unable to visit the place since 2015.

Tuati has tried on several occasions to go through the official route and appealed to the Georgian ombudsman for an explanation. The correspondence was long, and the final answer he got was that the Georgian Ministry of Internal Affairs has the right to ban entrance to individuals it deems may present a threat to security and the territorial integrity of Georgia.

“Then, same as now, all Kazbek members were law-abiding citizens, supporters of a sovereign Georgia and Georgian state,” Sergo Tuati told the Ekho Kavkaza media outlet.

“We always were of a clear opinion about the illegality of all forms of separatism on the territory of Georgia. And thus, the behaviour of the Georgian side is insulting to us, because it is undeserved and unfounded. We would like for the official departments of Georgia to somehow pay attention to this issue and to solve this problem.”