The trope of a secret laboratory for the production of biological weapons has struck the media again – but this time in Moldova, not in Georgia.

Moldovan bloknot-moldova.md has published an article about a secret lab in Moldova, where Moldovans and Ukrainians are busy developing biological weapons.

Bloknot-moldova.md appeared several years in Moldova, and belongs to a Russian publishing conglomeration, but so far has not been observed to distribute or create fake news. 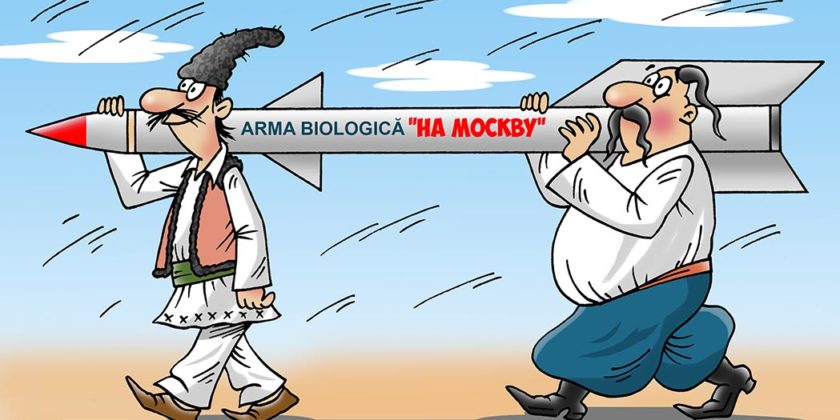 The outlet reports that biological weapons are being developed by a Ukrainian research company called the Ukrainian Science and Technology Center (STCU).

In Moldova, the center allegedly collaborates with the local Academy of Sciences.

According to the authors of the publication, the center produces and modifies viruses such as measles and African swine fever in order to send them to Russia:

“The standard strain is too weak for our climate, but its modified brother can do things in our climate and in Russia (and the main blow, no doubt, will be directed against the Russian Federation, this is the point of all these experiments: Ukraine, Moldova and the others are only a platform for experiments).”

At the same time, Bloknot writes that the work of the “laboratories” is controlled not by the Moldovan authorities, but by “the specialists of the STCU and the overseas owners in charge of them”.

The executive director of the Ukrainian Science and Technology Center Curtis Bjelajac called these accusations “unconditional disinformation” and suggested that the Russian authorities are responsible for its dissemination.

“Russia has a lot of money, a lot of trolls, and they can write whatever they want. It would be too difficult for us to respond to all the misinformation, and it is unlikely that this could change anything.

The executive director of the center gave a comment to the portal Stopfals.md, which is engaged in exposing fake news in Moldova:

“There are no labs to develop biological weapons. This is pure nonsense and the imagination of the Kremlin’s henchmen. We are not engaged in biological weapons, and all information about our activities is open, it can be found on our web page, including the decisions of governing bodies, financial reports, annual reports.”

The STCU is an intergovernmental organization, established in 1993 on the initiative of Ukraine, the USA, Canada and Sweden.

The Academy of Sciences of Moldova called the article “absolute absurdity.”

“The STCU does not have its own laboratories and does not conduct research. The center has no full-time research staff. The projects are implemented by researchers from Moldova working in scientific institutions accredited in the Republic of Moldova.”

Stopfals.md writes that Moldova participates in the Convention on the Prohibition of the Development, Production and Stockpiling of Bacteriological (Biological) and Toxin Weapons and on their Destruction (BWC), which it joined in 1972. It reports on the implementation of the terms of this convention annually, and reports are readily available.