Just what’s happening in Armenia? Main players, who wants what

Below, JAMnews presents an overall view of the main actors of the civil disobedience movement, their aims and who is supported by whom and why.

The opposition and civil society are protesting against the rule of a man who has ruled the country for the past 10 years – the former president and current Prime Minister Serzh Sargsyan.

However, the demonstrations have nothing to do with the country’s foreign alignment policies. Despite the fact that the leaders of the opposition movement are, for the most part, pro-Western, it’s not about pro-Westerners squaring off against what is perceived by many as a pro-Russian government. All the hullaballoo is, above all, about Sargsyan’s ineffective socio-economic policies.

The questions of who could replace him or what could the hypothetical candidates offer Armenia are not on the table right now.

wo years ago on 6 December 2015 a constitutional referendum took place in Armenia. Only 50.8 percent of eligible voters cast their ballots, and the majority of them voted for Armenia to shift from the semi-presidential system of governance to a parliamentary one.

The bill was put forward by the president of the country, Serzh Sargsyan. At the time, he had two years remaining in his last (second) term as president, and did not have the right to run for a third term.

The parliamentary system is different from the presidential system in that the head of state is the prime minister, who is in turn elected by MPs.

The opposition, many experts and journalists warned that the main aim of this bill was to ensure that Serzh Sargsyan would retain his position as head of state for an indefinite period of time. This scenario has now come true, with his recent appointment to the position.

On 9 April 2018 a new president was appointed, but the position has a very limited scope and authority. Earlier, new laws had been added to the legislation which further strengthened the powers of the prime minister, giving him complete control over police and security structures in the country.

The prime minister is chosen by parliament, rather than by a direct public vote. The majority of the Armenian parliament is made up of members of the ruling Republican Party of Armenia, which is headed by Sargsyan himself.

The party predictably put forward his candidacy several days before the vote, with little doubt that he would become the new PM when it came time to vote.

It was for this reason that a protest began on 13 April, which was organized by opposition MP Nikol Pashinyan, who came out with his supporters onto the street.

He was not accompanied by many people on the first day. But on the second day, things rapidly changed, and young people and students came out onto the streets as well. The number of demonstrators gradually grew and is now comprised of tens of thousands of people.

Protestors slept on the streets in tents and blocked streets in an attempt to block MPs from voting, but in vain. On 17 April 2018, the parliament appointed Serzh Sargsyan as the prime minister of the country.

On the same day, Nikol Pashinyan announced that a peaceful, ‘velvet’ revolution had begun, calling on people to join in the demonstrations, refuse to go to school, to work, empty their bank accounts and boycott state structures.

emands of the opposition and protestors

Serzh Sargsyan publicly stated in 2017 that he intended to leave his position as head of state and that he would not take up a seat in the government – neither as prime minister nor as president. He said that he felt committed to the idea that nobody should rule the country for more than two terms.

This is the main complaint of the opposition and demonstrators: Sargsyan must abide by his promise.

Who is Nikol Pashinyan and what does he want? 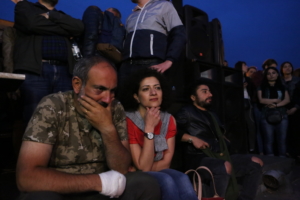 Nikol Pashinyan is a former journalist and editor with a history of political activism. He has supported a number of political movements. In his earlier political career, he was not very popular.

In 2017, Pashinyan was elected to parliament from the Yelk opposition party [Yelk meaning ‘way out’ in Armenian], which was a part of a political bloc with two other parties: ‘Brighter Armenia’ and ‘Respublic’. This political bloc received seven percent of the vote, which allowed it to enter parliament.

Yelk is considered to be the only real opposition party in the country. The party is pro-Western in its external alignment policy and often criticizes the ruling party. It wants for Armenia to withdraw from the Russian-led Eurasian Economic Union and has, on a number of occasions, claimed that Armenia’s economy has suffered as a result of its membership in this organization.

Pashinyan began something of a theatrical political protest several weeks back before the prime minister elections: he set out on foot across the country, and spoke to people in villages and cities about his plan to prevent Sargsyan from becoming the prime minister. He called for one hundred thousand people to come out onto the streets of Yerevan and to surround the parliament building to prevent the vote from taking place.

Who is Serzh Sargsyan? 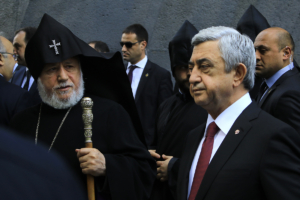 Serzh Azati Sargsyan has been in power for 25 years in one way or another. From 2000 to 2007, he was the country’s Minister of Defence. He then served as Prime Minister for a year. Beginning in 2007, he took over the leadership of the Republican Party of Armenia. He was first elected to the presidency in 2008 where he remained until the end of his second term in April 2018.

Sargsyan’s rule has been semi-authoritarian in nature. His party controls the parliament, most of the ministries and other leaders, who are either members of the Republican Party or openly display their loyalty to the party.

The opposition believes that over the past ten years, Serzh Sargsyan has not developed the country. Armenia suffers from a population decline because many leave to seek work elsewhere. Many say that they have not had work in years and that they have no prospects.

Sargsyan is a good ‘chess player’ too – something which is well-reflected in his political manoeuvres. Well aware of the fact that people are tired of seeing the same faces in power, he has on two occasions added new and charming individuals to his team.

This was first done at the parliamentary elections. He entrusted the election campaign for the Republican Party of Armenia to the likeable and mildly popular Karen Karapetyan, the then prime minister. The party won a majority of seats in the parliament as a result.

He used the same trick when the time came for a new president to be elected. He had Armen Sargsyan, a well-respected figure with an intellectual background and contacts in the diaspora, appointed to the post.

Society and the media – who’s saying what

Experts say that many in Armenian society have been disappointed by the failures of past protests.

In 2015, the public came out onto the streets to protest against electricity price hikes in a series of massive rallies that came to be known as #ElectricYerevan.

In 2016, a group of armed individuals seized a police station which then grew into a protest against the authorities.

Both times, the public had hopes of change. However, this did not come about. Electricity did increase in price after all, while the group of armed individuals surrendered.

ew believed that people would come out onto the street yet again. However, many have joined the protests. Pashinyan stubbornly continues the protest, and, over the past few days, it has turned into a round-the-clock demonstration.

There are, according to different estimates, between 10 thousand and 50 thousand people on the streets participating in the demonstrations. This is a big number, but in order for the peaceful ‘velvet’ revolution to work, many more people are needed.

Protests in Armenia have been the main news of the week. JAMnews has kept a live blog of the events as they have developed. Catch up on them below: