Meduza has published a report on the details of the financial scheme – here is a short summary:

The aim of the financial scheme

The aim is simple. Ukraine announced a banking blockade against the DPR and LPR, and direct transactions between the regions and Russia are impossible. Moscow had to find a way to legalise financial transactions to the regions, but avoid violating the Minsk Protocol which forbids the conducting of business in and money transfers to these regions of Eastern Ukraine without the prior agreement of Kiev.

How the financial scheme works

Companies and individuals that Moscow would like to finance in Eastern Ukraine are registered in South Ossetia. As of now, more than 200 companies from the LPR and DPR have already been registered.

Three years ago, the Bank for International Settlements opened in South Ossetia. Financial transactions in Russia and the unrecognised republics are legalised through the bank.

An agreement with Moscow means that Ossetian representatives of Donetsk and Luhansk companies have special tax privileges and pay only one per cent of their income. For that reason, income from these tax payers is not large – in 2017, it was about 20 million roubles [USD 300 thousand].

However, the aim of the project was not to fluff up the South Ossetian budget.

“If the government has made such a decision, I support it,” said President of South Ossetia Anatoly Bibilov to Meduza. “The South Ossetian government does all it can to help these judicial entities get on their feet, be it half a percent or no percent at all.”

The Bank for International Settlements is the largest tax-paying entity in South Ossetia. In 2017, it transferred some 14 million roubles to the state treasury [about USD 200 thousand].

Back in March 2017 all large enterprises in the Donetsk region (such as the Yenakievski and Makeevski metallurgical factories, the Donetskstal factory, the Khartsyzski pipe factory and others) began to register themselves as filials of the South Ossetian company Vneshtorgservis. 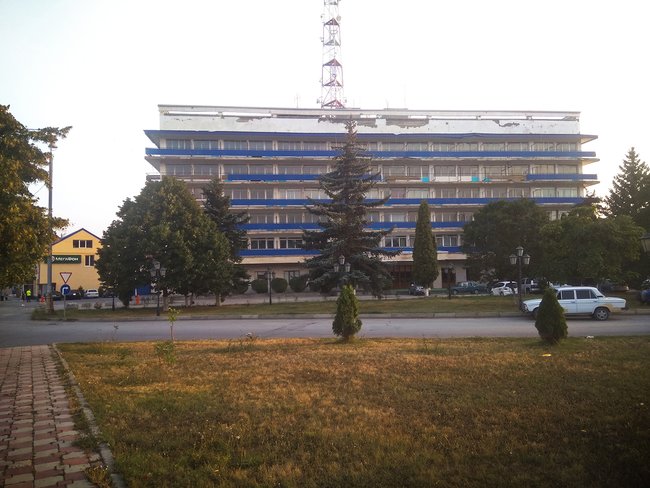 In the beginning of April 2018, the head of the DPR, Aleksandr Zakharchenko, signed an order making the company the ‘temporary administrator’ of the region’s factories, the majority of which were earlier owned by the richest man in Ukraine, Rinat Akhmetov.

The same happened with Akhmetov’s assets in the Luhansk oblast: Krasnodonugol came under the management of Vneshtorgservis. Krasnodonugol employs 12 000 people and is engaged in coal extraction, and continued to work even after the beginning of the armed conflict.

Kommersant reported that in actuality, Vneshtorgservis is controlled in South Ossetia by Sergey Kurchenko, a businessman close to the family of the president of Ukraine, Viktor Yanukovich.

Kurchenko has lived in Moscow since 2014. The US Department of Treasury announced the connection between his company, Gas-Alyans, and Vneshtorgservis, and placed sanctions against both of them in 2018.