How big crime is ‘forgotten’ in Azerbaijan

The scandalous criminal cases of the last ten years in Azerbaijan have become the focus of public debate in Azerbaijani society.

Instead of receiving justice and the punishment of the guilty in these cases, the publish has had to content itself with the promises of the authorities to “look into the investigation”.

What did the public know about the progress of these investigations – and what should they have been informed of?

– The assassination of General Rail Rzayev, February 11, 2009.  One of the “founding fathers” of the army of independent Azerbaijan was shot by a sniper in a car near his home.

Immediately after the murder, President Ilham Aliyev stated that he was taking the matter under his personal control. However, 10 years later, there are still no developments in the case or statements from government agencies – neither about the possible motives for the crime, nor about the suspects.

– The assassination of publicist Rafik Tagi, November 23, 2011.  On November 19, he was stabbed in the street. In hospital he managed to give several interviews in which he suggested that he was avenged for criticizing Islam, and especially criticizing the Iranian government.

Eight years have passed. There are still no suspects, no detainees, nor any information about the progress of the investigation.

– Fire on the oil rig platform on December 4, 2015. 12 people died, 18 went missing during a fire on the SOCAR oil rig on the Guneshli field.  Due to strong winds at the time, the fire was extinguished only after seven days.

Since then, no one has been prosecuted, and there have been no official statements about the progress of the investigation.

– Spy scandal on May 7, 2017: Azerbaijani security forces issued a joint statement exposing a spy network in the military and amongst civilians.  They were accused of “complicity with the Armenian forces” in the Terter region of the country.

A little later, information appeared in the media that many of the accused had been tortured, and some died during torture. Relatives of the victims gathered in front of the presidential apparatus, demanding that they be explained why they had first been informed of the death of servicemen, who later were accused of treason.

– Schoolgirl suicide on April 6, 2019.  14-year-old Elina Hajieva jumped out of a school window due to bullying by her classmates and the indifference of her teachers. To make matters worse, the school principal, instead of calling an ambulance, kept the girl in her office for two hours, forcing her to answer questions and filming the process on video.

Then Elina was taken to the hospital, where she died two days later. Her relatives were not allowed in to see her.

The principal is currently under house arrest. The court has rejected the plaintiff’s request to imprison her until the trial.

Since late April, there have been no official statements about the progress of the investigation. 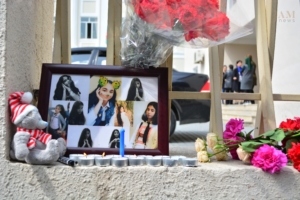 What information is the public entitled to by law?

“The 2005 Law on Obtaining Information specifies requirements for government agencies: they are required to provide information in response to requests from private and legal entities if it is not classified.

“However, seven years after the adoption of the law, no tools have been created for its implementation, and then the provision of such information was assigned to the Ombudsman.  But, firstly, the Ombudsman does not have staff for these purposes, and secondly, the Ombudsman’s office cannot even cope with its human rights obligations.”

Alesker Mammadli says that on the websites of state bodies they require additional, not required by law, data on people requesting information, for example, identification number.  By law, a request must be answered within seven business days, but sometimes it can take a month.

The expert believes that the lack of information generates rumors and gossip and undermines the credibility of government agencies. Thus, an opposite affect is achieved – the public becomes vulnerable to external information influences:

“All this leads to distrust of government bodies on the part of society, and this, in turn, threatens the country’s information security.”

Despite the rights that the law gives them, independent journalists frequently report on the closed nature of state structures in Azerbaijan.

Journalist Ramin Deco has tried to sue the state for this. Local courts have never decided a case in his favor, and now several of his cases have been sent to the European Court of Human Rights.

The ECHR now has dozens of such cases, confirms lawyer Khalid Agaliyev.  He also says that according to the Institute of Media Rights, government agencies only share information with society on official websites in 30-40% of cases, as required by law.  And they answer only one of ten information requests.