Khudoni Hydro-Power Plant (HPP) is one of Georgia’s largest energy projects, which was planned back in Soviet times.

Initially, the British-Indian Trans Electrica Ltd. was commissioned to construct this USD 1 billion worth HPP, that stirred up the local population and caused environmentalists to protest. However, the government is going to ‘remove’ the investor and engage in implementation of this project independently. Negotiations on this issue have already been launched and Trans Electrica Ltd. has also confirmed it to JAMnews.

“The HPP will be built by all means. It will be constructed by the government,” said Kakha Kaladze, Georgian Energy Minister.

Under the contract, Trans Electrica Ltd. was expected to launch the HPP construction works by 28 April 2012. However, Trans Electrica Ltd., incorporated in the British Virgin Islands, has failed to comply with its contractual commitments and hasn’t launched construction up until now. The reason for the aforesaid is not only due to the company having financial problems, but also the local population and the environmentalists’ protests.

Today, the government claims it’s ready to deny Trans Electrica Ltd. of the USD 1 billion worth project and construct the HPP independently, rather than to attract new investors.

“We are engaged in talks with the investor. We suggest that the government should implement the project independently. The HPP should be constructed by all means. It’s very important for the country’s economic development,” Georgian Energy Minister, Kakha Kaladze, stated on 19 April.

“I would like to confirm that the government has appealed to the company owners, though the text of this appeal is unknown to me. Negotiations are confidential and management has no information in this regard,” Davit Mirtskhulava, Trans Electrica Ltd. Technical Director, told JAMnews.

Potential damages and benefits from operation of Khudini HPP has been subject to fierce debates for many years. The environmentalists talk about a possible environmental catastrophe, while government officials underline the economic benefits that the HPP operation could bring.

The project provides for the construction of a 702 MW Hydro-power plant, with a 200-meter high concrete arch dam and a 364 million cu m. water reservoir on the Enguri River, in Khaishi village, Zemo (Upper) Svaneti (Western Georgia).

It will be the second largest HPP in Georgia (after Enguri HPP with a total capacity of 1300 MW) and it will generate 1.5 billion kw/h electric power annually. According to early estimates, Khudoni HPP will cover 20% of Georgia’s annual power consumption.

A 528 ha. land area will be flooded for the construction of the aforesaid HPP, which implies that Khaishi village, including six small settlements (about 535 families), will be under water.

The estimated cost of Khudoni HPP amounts to USD 1 billion. Of this, USD 600 million will be spent on the dam’s construction, while USD 400 million on population resettlement and other social needs.

Speaking about the reasons for annulment of contract with the investor, Kakha Kaladze referred to the clause, under which the government shall fully purchase the HPP’s generated power within 15 years and, moreover, at rather high prices –8,88 cents per 1 kWh.

“And that’s comparing to the procurement cost of electric power in Turkey which makes 3,9 cents per 1kW/h.

Trans Electrica Ltd. company officials claim, the aforesaid reason is incomprehensible and unexpected for them, since the power tariff rate was agreed with the government and was written down in the contract just recently, in August 2015.

Gia Khukhashvili, an economics expert, believes that the contract concluded with Trans Electrica Ltd. was dubious right from the beginning and some traces of the corruption deal could be found there:

“Contracts, under which the government undertakes to purchase electric power generated by a certain HPP at high tariff rates, are an inexhaustible source of corruption. I wonder, whether anyone was interested in the reasons for concluding such a contact? Has anyone been punished for formalizing such an unreasonable contract, which is disadvantageous to the Georgian government?” said the expert.

The amount of compensation that the government will have to pay to Trans Electrica Ltd. for cancellation of the contract is yet unknown.

An audit company is now calculating the company’s sustained expenses. According to David Mirtskhulava, the investor has already spent USD 30 million on feasibility studies.

Economy experts believe that implementation of such a high-cost project by the government is generally unjustifiable. It proves that there is an unsound investment climate in the country.

Murman Margvelashvili, Director of the World Experience for Georgia think-tank, says that the Georgian government’s engagement in such a project is not justifiable from an economic point of view:

“The government constantly talks about the need for improving the investment environment and the need for making investments, and then it backtracks to the starting point, where the state is the key economic stakeholder,” says Gia Khukhashvili. 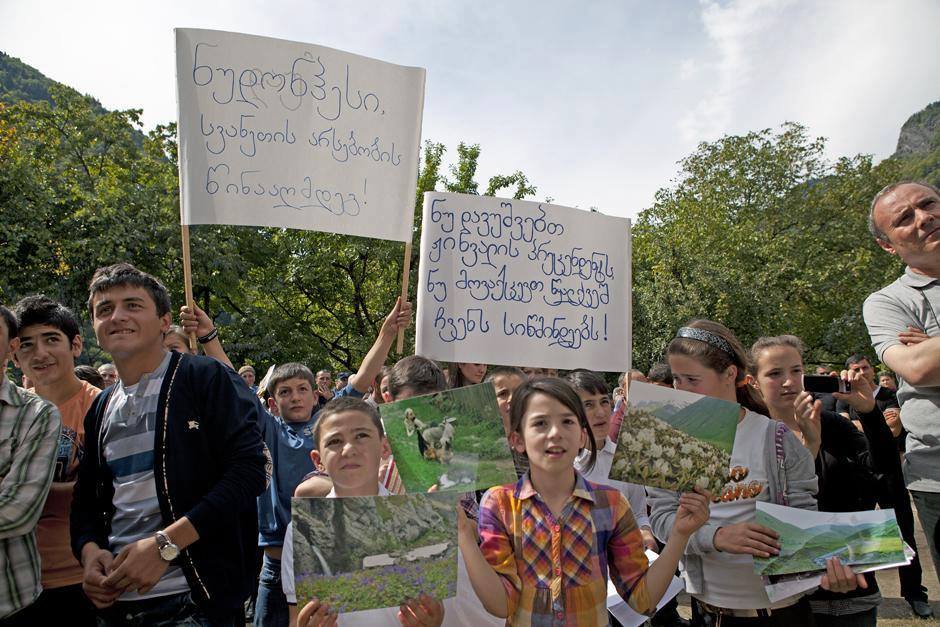 Khudoni HPP is one of the most controversial projects in modern Georgia’s history. The HPP construction idea dates back to 1979.

An ambitious plan to develop the entire area along the Enguri River was part of Soviet Georgia’s ‘Industrial Dream’. Construction of HPPs on the Enguri River aimed to ensure power supply to Russia’s southern regions. Developed at ‘TbilHydroProject’ LLC design institute in 1979-1982, the project was approved in Moscow, since construction of HPPs with the installed capacity exceeding 300 MW was decided at the union level at that time.

The first works as part of the project were launched at the end of the 1980s. However, in 1988, the majority of the Georgian public, as well as the newly setup national movement, opposed the construction of Khudoni HPP. By that time, 25% of works had already been completed with the government’s sustained expenses amounting to RUB 150 million.

The protest rallies gained new vigor after the 1988 earthquake in Spitak (Armenia). Georgian scientists started talking about the unreliability of the Khudoni HPP dam and possible environmental catastrophe. The local population in Svaneti declared a mass hunger strike. Meanwhile, hundreds of people rallied in Tbilisi, demanding to stop the construction works. The construction of Khudoni HPP was suspended by the Georgian Cabinet of Ministers’ decree in 1989.

Talks on the need for construction of the Khudoni HPP renewed in late 1990s, amidst a nationwide energy crisis. However, the government failed to find an ideal investor for such a costly project.

“After the ‘Rose Revolution’, Mikheil Saakashvili’s government actively started searching for potential investors and Trans Electrica Ltd. stood as such a company. A project was drafted and agreed upon, but the construction works were not launched during Saakashvili’s rule.

Before the 2012 parliamentary election, when being in opposition, the Georgian Dream coalition pledged to its electorate that it would ban the construction of huge HPPs in Georgia. After Georgian Dream came into power, a special group was set up at the Energy Ministry to study the Khudoni HPP contract. The group’s conclusion hasn’t been made public up until now.

The Georgian Energy Minister, Kakha Kaladze, first mentioned the possible cancellation of the contract with Trans Electrica Ltd. back in 2014. The Minister demanded the company to produce performance bonds, as well as information regarding the companies’ founders:

The construction of Khudoni HPP will result in the flooding of Khaishi village and a couple of smaller neighboring settlements. According to early estimates, it will require the resettlement of up to 3,000 locals.

The Khaishi population has been living under the risk of resettlement for over 20 years. They are told that their houses, church and part of their graves will be under water.

When the construction of Khudoni HPP was initially launched, dozens of families were displaced from Svaneti and resettled in Mukhrani village, Shida Kartli region. Most of them were unable get used to living in the lowlands and returned back to Khaishi.

There is one more fact that proves how serious the government is on preparing for the implementation of the Khudoni HPP project.

In April this year, the Georgian government came up with the initiative to facilitate a procedure of ‘expropriation of private property’ for projects of national importance.

An involuntary resettlement procedure will be introduced, which implies expropriation of privately owned property by court ruling. The government is entitled under the first instance court ruling to evict a citizen from his/her owned house or land plot using police forces and expropriate his/her property within a month in exchange for compensation.

The bill hasn’t been considered in Parliament yet. However, experts believe that those tough and disputable regulations enshrined in the bill are related to the construction of Khudoni HPP. If passed, the law will make the Khaishi population resettlement process easier.