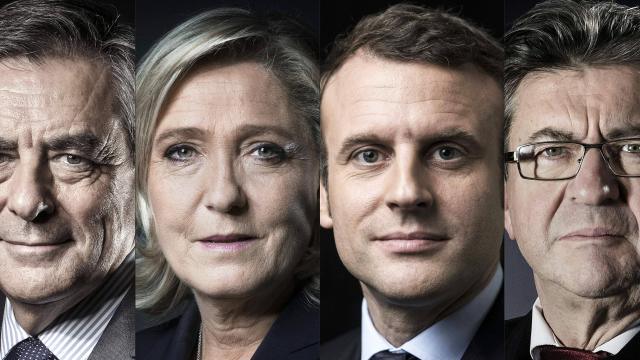 François Fillon – a conservative right-wing program: a sharp cut down on governmental expenses (by EUR 60 billion);

Mélenchon suggests an ultra-leftist program: the USA and German Chancellor Angela Merkel are the key targets of his attacks.

According to public opinion-based forecasts, each candidate will get slightly more than 20% of votes as a result of the first round of election. Marine Le Pen and Emmanuel Macron are most likely to make it to the second round of elections. Also, the latter is said to have a higher chance of securing a final victory.

Nearly one-third of the French population consider themselves as undecided voters.

The election campaign was accompanied by numerous scandals. François Fillon was blamed for spending millions of budgetary funds on remunerating his family members’ fake jobs. Marine Le Pen was accused of taking a rather dubious EUR 9 million loan from a Russian bank.

The attitude towards Russia and President Putin is one of the most important issues in this election. Only one of the four presidential candidates (Emmanuel Macron) has never been spotted showing a liking for the Russian leader.