The founder of the largest Georgian commercial bank, Mamuka Khazaradze, and his business partner Badri Japaridze have announced the creation of a new movement which will be transformed into a political party in October.

The movement will be called Lelo – an old Georgian ball game, similar to rugby.

The presentation of the new movement took place on September 12 in western Georgia, in the Black Sea village of Anaklia, where the construction of the first deep-sea port in Georgia is being overseen by Khazaradze’s company.

Lelo’s main goal is to win the parliamentary elections to be held in Georgia in 2020.

Khazaradze is in open conflict with the most influential person and unofficial leader of the country – Bidzina Ivanishvili. Thus, Khazaradze’s plans are of particular interest in Georgia.

The presentation of the movement took place in Samegrelo on the sandy beach in Anaklia. He himself stood next to a yellow banner on which the businessman wrote the word “Lelo” at the end of his speech with a marker – the name of the movement which will soon be registered as a political party.

Khazaradze chose the name of the organization under the influence of the work of the Georgian poet Galaktion Tabidze, and the date of the event, September 12, coincided with the day of the murder of another Georgian poet and writer, Ilia Chavchavadze.

In general, there was more symbolism in the banker’s 17-minute speech than political plans.

The presentation was held with the attendance of a narrow circle, in the presence of guests from Tbilisi who will become members of the movement.

The local population was not invited.

Anaklia was not chosen by chance.  Khazaradze’s company, together with American partners, is building a deep-sea port in the area. This project has been called one of the most important for Georgia. The port has been conceived of as a potential main hub of cargo transportation between Asia and Europe.

However, the implementation of the project, in which America is interested and  hich Russia opposes, was called into question after the authorities began an open struggle with Khazaradze and his company.

The businessmen deny the charges and themselves accuse the government of putting pressure on them, including the new prime minister, Giorgi Gakharia.

The opposition and most experts also consider the case politically motivated.

According to analysts, Ivanishvili long ago saw a political threat in Khazaradze and is trying to put pressure on the businessman through the prosecutor’s office.

The criminal case against Khazaradze has negatively impacted the Anaklia project.

Foreign companies involved in the construction of the port have regarded this as a bad sign, and one company has left the project altogether.

In response to the actions of the authorities, Khazaradze first spoke about the creation of a social movement in July this year.

A few days after this statement, the prosecutor’s office charged Mamuka Khazaradze and Badri Japaridze with laundering $17 million.

On August 20, at the request of the prosecutor’s office, the court seized all bank accounts of Khazaradze and Japaridze.

At the presentation, Khazaradze stood against the sea and shared his plans for the future.

“Anaklia is the point of Georgia closest to Europe.  This is an opportunity for Georgia to return serious functions [importance] to the region and on the world map,” he said.

Who will join Lelo? 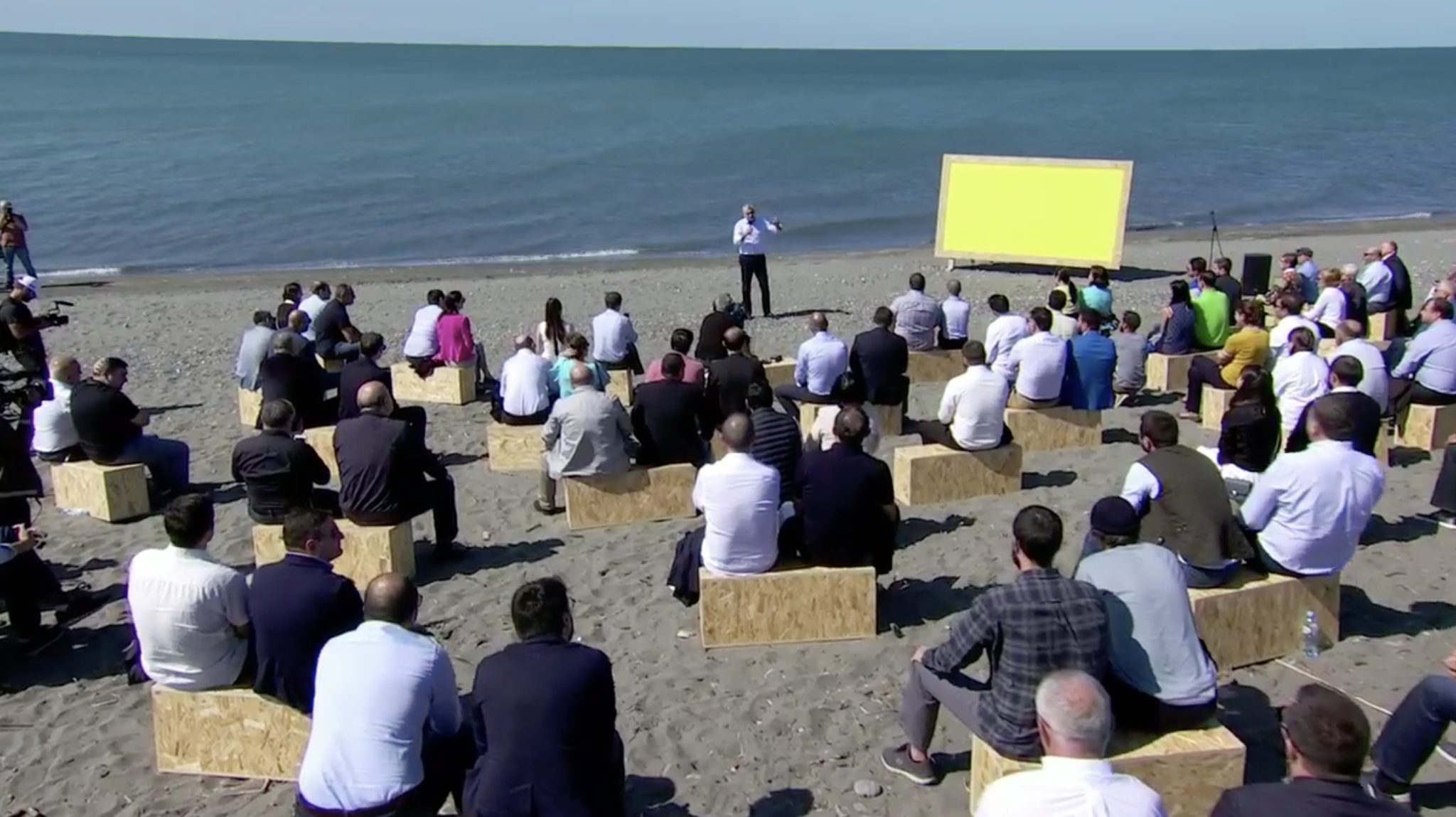 Khazaradze said his party is not going to cooperate with other political forces.

At the presentation, he openly dissociated himself from the entire Georgian political spectrum, noting along the way that “Georgia will not be saved by the messiahs” and that “we should all do this together”.

Khazaradze’s movement will consist not of politically active leaders, but of people who have achieved success in their professional field – lawyers, doctors, scientists, writers, etc.

• Explainer: why is Georgian billionaire Ivanishvili waging war against the country’s most popular bank?

• Georgia political crisis – the oligarch besieged from all sides

The businessman plans to find 12 professionals in various fields (healthcare, education, law, etc.), reformist leaders, put them at a round table and begin to search for ways to develop these areas.

“We will find 12 leaders in all areas, this process has already begun. These will be 12 reformers in medicine, 12 reformers in education, 12 male leaders in villages, 12 women in the districts, because not only men should save this country, each of us should participate in this” said Khazaradze.

He said that the party’s structure will be horizontal and each member will be a leader.

Khazaradze said that the circumstances forced him to go into politics.

However, he again did not say specifically who was behind these circumstances:

“We are people who have been successful in their field. We created jobs, paid taxes, and today a completely different reality forced us to gather here. Today, Georgia is in dire need of the unity of those people who are individually successful in various fields”, said Mamuka Khazaradze.

Describing the state of affairs in the country, the businessman used the terms “hopelessness” and “nihilism”.

“Why did we become so hopeless, why do we not believe that we will jointly cope with difficulties and build a new country?” asked Khazaradze.

He touched upon problems in the economy, weakened institutions, and growing emigration, but did not specify what exactly caused the country to be in such a deplorable state. In his speech, Khazaradze only once mentioned the authorities, but again abstained and did not give specific names.

“I can even thank all those officials and politicians who put pressure on me only because I said that this could not continue,” Khazaradze said.

What will Lelo focus on?

During the 17-minute presentation by Mamuka Khazaradze and Badri Japaridze, it became clear that the future Lelo political party would be pro-Western.  Both leaders emphasized more than once that Georgia should become part of Europe.

Lelo will pay particular attention to the problem of emigration. Mamuka Khazaradze noted that today Georgia survives largely thanks to emigrants. According to him, people are leaving the country because they see no prospects. Lelo’s goal will be to fight this tendency and create real jobs in the country.

Lelo invites young people who have achieved success in science and other areas of public life to join its ranks.

“We are looking for leaders. Successful people. In the near future, our association will become a political party, a party of leaders”, said Mamuka Khazaradze.