Cyanide case. A real attack or the Patriarchate’s court games?

Georgian Prosecutor’s Office is investigating an unprecedented, scandalous case-a clergyman, suspected of attempt to murder Catholicos-Patriarch of All Georgia Ilia II, with a poisonous substance-cyanide, has been arrested.

This is the investigation’s official version. However, many don’t share it.

What has been known so far?

Archdeacon Giorgi Mamaladze, a clergyman and deputy head of the Patriarchate’s assets management department, was arrested by the Chief Prosecutor’s office on the charges of ‘plotting a murder of high-ranking cleric’, at Tbilisi International Airport, early on February 10.

Mamaladze was going to leave for Germany together with the Georgian clergymen’ delegation. On a side note, Georgian Patriarch, Ilia II, travelled to Germany for treatment due to aggravated health condition, on February 2.

A hazardous chemical substance, sodium cyanide, was found in Mamaladze’s luggage during the search. The Archdeacon was put in pretrial detention. Cyanide was introduced as the case evidence.

The Chief Prosecutor’s Office made public the clergyman’s arrest three days later, after Rustavi 2 TV company had reported on the aforesaid.

Chief Prosecutor, Irakli Shotadze himself announced about Mamaladze’s arrest at a special briefing on February 13.

According to the Chief Prosecutor, ‘a murder of high-ranking cleric was plotted’.

The law-enforcers know, who Mamladze’s alleged victim was. Although his name hasn’t been specified, both, the law enforcers and the government officials, have clearly hinted that Mamladze’s victim was 84-year-old Georgian Orthodox Church leader, Ilia II.

As it was stressed at the briefing on the number of occasions, Mamaladze was going to travel exactly to the country where Ilia II is undergoing treatment now.

Details from the Prosecutor’s briefing

An unknown individual reported to the law-enforcers on February 2 that Mamaladze was going to purchase cyanide.
Based on the aforesaid individual’s report, the Prosecutor’s Office started keeping watch on Mamaladze.

According to the Prosecutor, Mamaladze wanted to obtain cyanide as soon as possible, since he needed it before his departure to Germany. He promised to pay quite a substantial sum and provide some ‘unlawful benefits’ in exchange for the poisonous substance.

A person, from whom Mamaladze purchased cyanide, is yet unknown to the investigation.

Neither has the investigation disclosed the name of individual, who reported on the aforesaid to the Prosecutor’s Office.
The only thing known so far is that there are also video and audio records, obtained as a result of the investigative activities.

According to the Prosecutor’s Office, the crime was committed for mercenary motives. If Mamaladze is found guilty, he will be facing from 7 up to 15 years in prison.

David Okhanashvili, Georgia Patriarch’s body guard chief, as well as representatives of the Patriarch’s Office, were interrogated in connection with the case.

The Archdeacon’s case hasn’t been classified, though the Prosecutor’s Office has refrained from publicizing more details due to ‘specificity’ of this case.

Mamaladze’s apartment was searched upon his arrest. An artisanal gun with no number and 6 ball cartridges, which Giorgi Mamaladze had illegally purchased and kept in his residential apartment, were seized by the law-enforcers.”

According to the Prosecutor’s Office, Mamaladze doesn’t admit his guilt and uses his right to silence.

Giorgi Pantsulaia, the detainee’s lawyer, doesn’t publicly disclose the case details either. The lawyer is restricted to discuss the case-related matters by the Prosecutor’s Office, since he has signed a confidentiality and non-disclosure agreement.

Mamaladze’s letter to the Patriarch

After the Prosecutor’s Office briefing, Rustavi 2TV made public one more case-related detail.

The authenticity of the letter hasn’t been confirmed yet. According to Rustavi 2 TV, a reliable, confidential source handed the letter to the broadcaster.

In this letter, the Archdeacon allegedly reports to the Patriarch on the situation around the Church assets. As he points out in the letter, he conducted a three-month investigation and disclosed certain illegalities, but he wasn’t allowed to discuss them at the Holy Synod sitting. Therefore, he is directly requesting the Patriarch to show interest in this case.

And also, some private individuals are taking advantage of the agricultural lands that are legally owned by Church and that shouldn’t be used for commercial purposes.

As it turns out from the letter, the indebtedness of the Church clinic amounts to GEL5 million, because the clinic management has been involved in corrupt deals. As Mamaladze also pointed out in the letter, one of the high-ranking clergymen, Archbishop Jakobe, came and asked him not to disclose the information about the clinic.

As it is pointed out in the letter, Archdeacon Giorgi Mamaladze was also subjected to intimidation.

Archdeacon Giorgi Mamaladze is 31. He was born in Kobuleti. He became an archdeacon at the age of 26, in 2010. 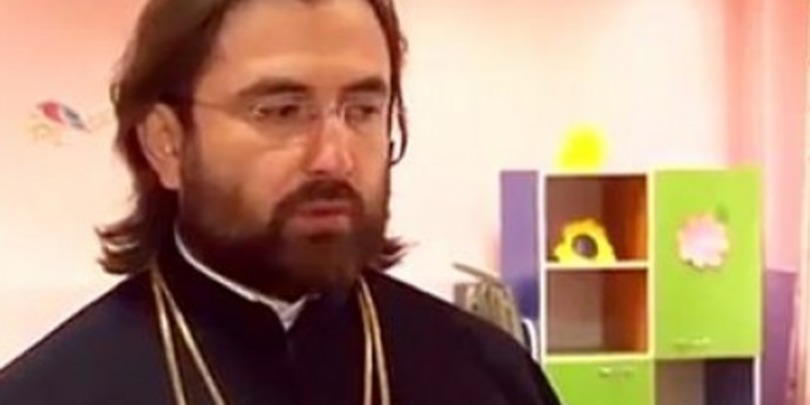 Before his arrest, he was the head of St. Joachim and Anna Medical Center, owned by the Patriarchate of Georgia, as well as served as Deputy Head of the Patriarchate’s assets management department, which is a rather high post.

Earlier, Mamaladze was a senior priest at St. Barbare Church, in Batumi (Ajara AR). As Netgazeti reported, the repair works that were launched in the church in 2014 without the Cultural Heritage Agency’s permission and that distorted a historical image of the church, were attributed to him.

Giorgi Mamaladze is regarded as a team-member and close associate of one of the influential clerics, Archbishop Dimitry Shiolashvili. Dimitry Shiolashvili is the nephew of Ilia II. At the same time, he is said to be the Patriarch’s most likely successor after his death.

In 2016, Archdeacon Mamaladze was conferred a right to wear the second cross, which is one of the highest recognitions in the church hierarchy.

As the Prosecutor stated at the briefing, due to his official activities, Giorgi Mamaladze had regular contact with Catholicos-Patriarch and his entourage. He also had chance to meet the Patriarch in privy. Father Mikael Botkoveli, the Patriarch’s secretary, also confirmed this report in the interview to Netgazeti.

As far as Georgian Patriarch’s health condition is concerned, he underwent a laparoscopic gallbladder surgery in Berlin clinic, on February 13. According to the official reports, the surgery was successfully completed.

Ilia II will stay in Berlin clinic for a couple of days and will return home upon rehabilitation.

Georgian Patriarch’s first photo after the surgery has been already spread on social media. 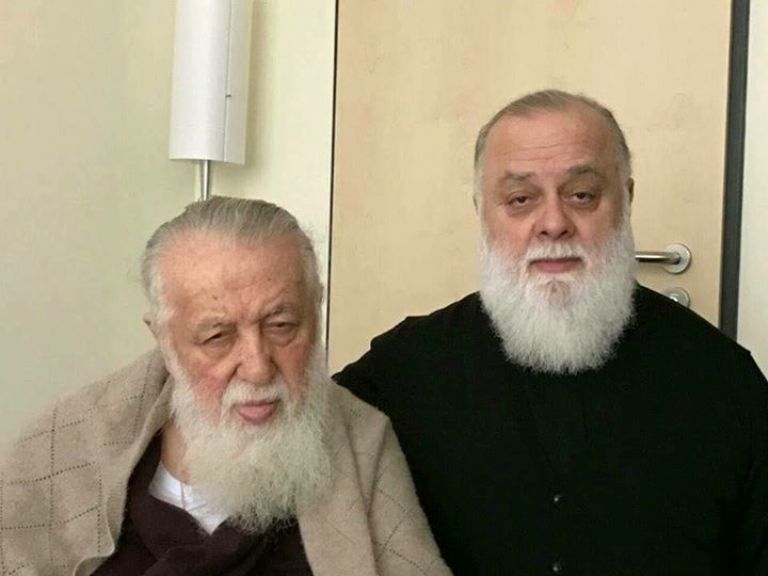 Ilia II is under enhanced security in Berlin. Anzor Chubinidze, the Chief of the Special State Protection Service (SSPS) of Georgia, is staying with the Patriarch.

What do clergymen say

The reports that Mamaladze allegedly attempted to poison Georgian Patriarch have caused mixed reactions in clergy.

Those reactions clearly shows that there is a serious split within the church. JAMnews has recent covered  this issue.

Part of the clergymen doesn’t believe the Prosecutor’s version, whereas another part claims, ‘the church should be purged from killers’.

What’s going on in the Patriarchate?

The majority of theologians believe that the aforesaid processes are related to a struggle for being a successor to the Patriarch’s throne, which is currently underway in the Patriarchate.

“It’s a known fact that Batumi Metropolitan, Dimitri Shiolashvili, who is the Catholicos-Patriarch’s nephew, has been struggling for strengthening his positions. Everything suggests that the Patriarch himself supports a genetically related successor. Archdeacon Giorgi Mamaladze is regarded as being a member of Metropolitan Dimitry’s entourage,” Beka Mindiashvili, a theologian, told Radio Liberty. He doesn’t believe in the Prosecutor’s voiced ‘murder attempt’ version.

As he explained, in this struggle for the Patriarch’s throne there is Dimitri Shiolashvili and his supporters, on the one hand, and, on the other hand, there is the government, for which Shiolashvili isn’t a favourable candidate.

Mindiashvili finds it hard to specify at this stage the government’s would-be candidate for the Patriarch’s throne, though, he says, he should be an obedient one.  At the same time, he draws attention to the Orthodox Church tradition, under which, over the centuries, with rare exceptions, the government-supported candidates usually won the struggle for the Patriarch’s throne.

Opposition doesn’t trust the Prosecutor’s version and insist on setting up an investigative commission that will inquire into the case.

Irma Nadirashvili, MP from the parliamentary minority group, a member of the ‘European Georgia’ faction: ‘It’s absolutely unclear, how a person risked crossing the border with cyanide. It’s an unbelievable version that raises many questions.”

Social media users, who upon mentioning of  ‘cyanide’ involvement in the case, immediately recalled the Borgia family and Catherine di’ Medici, also have some questions. Even those FB users, who don’t exclude the government’s offered version, insist on bringing  more clarity to the case.

The government officials seem to be the only ones who have no questions to the Prosecutor’s Office, since they have trusted the investigation’s version the very first minute it was voiced.

The parliamentary majority group and government members were expressing with one voice their gratitude to the Prosecutor’s Office for ‘acting promptly’ and ‘preventing a tragedy.’

Although Mamaladze is just an accused, the authorities have no doubt about his guilt. And also, the government officials have been openly hinting that the Patriarch was presumably a target of this attack.

Giorgi Kvirikashvili, the Prime Minister: “We have all averted a major disaster. A treacherous attack against our country, against the Church, has been prevented. I would like to thank the law-enforcement agencies for acting promptly and efficiently. I’ve got this case under control since the very first minute and I’m going to leave for the Munich conference early so as to visit the Patriarch in Berlin.”

Archil Talakvadze, a leader of the parliamentary majority group, Georgian Dream faction member: “The measures to ensure Patriarch’s  security will be taken as long as required. Though, we should remember that apart from us and the body guards, the Patriarch is also protected by God and prayer.” 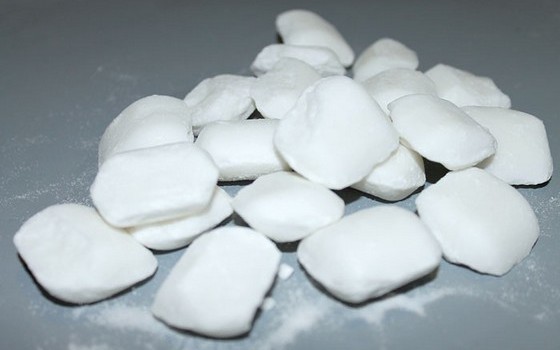 “Sodium cyanide is a solid substance that is similar to salt and it’s almost impossible to distinguish it from salt powder on cursory examination,” Ramaz Gakhokidze, the Head of Biochemistry Department at Tbilisi-based I.Javakhishvili State University, told Netgazeti media outlet.

In Gakhokidze’s words, cyanides are strong poisonous substances. Once they get in a human organism, they cause asphyxiation and instant death. In his words, cyanides can’t be detected through external examination.

“It’s a solid substance that is very much similar to salt and sugar. It’s the same as to put some sugar or sugar substitute in a pocket and cross the border. It causes no reaction [during the border check], it’s like ordinary salt,” says the chemist