Armenia: how genocide went from taboo to national rallying point

Every year the 24th of April is considered a day of mourning, with hundreds of thousands of Armenians from different countries coming to Armenia. Several million people in total generally participate in activities related to the theme of the day: the Armenian genocide. But it wasn’t always like that.

The 24th of April is the official day of remembrance for the victims of the Armenian genocide which took place in Ottoman Turkey in 1915. Before the genocide there were about 2.5 million Armenians living on the territory of the Ottoman Empire.

As a result of mass killings and deportations, more than half of them died. Although Armenia and several other western countries and organisations officially recognize the events as a genocide, Turkey categorically refuses to call it as such.

The Armenian genocide was a taboo subject in the USSR

Broaching the subject was not just a taboo, it was the taboo, a violation which could lead to fatal consequences equal to genocide itself – arrest, persecution, exile or even execution.

Mass reprisals took place during the period of Stalin’s rule, when Armenians, who had survived the Turkish pogroms, became a particular target of persecution just because they had come from other countries.

The topic was communicated throughout Soviet Armenia in a half-whisper, through family stories and survivors’ recollections, but it wasn’t talked of in the media or in public spaces. The very memory of it was forbidden, as if it had never happened at all.

In Soviet times, any national issue was regarded as potentially explosive in general, especially as the USSR renounced its territorial claims against Turkey.

The situation changed dramatically in 1965 when sporadic mass rallies were held in Yerevan on the 50th anniversary of the Armenian genocide. The rallies weren’t suppressed and eventually ended in success (which was something unimaginable for the USSR). 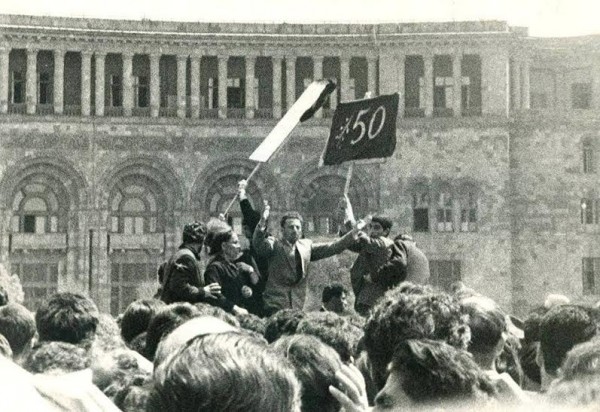 Formation of a consolidated culture

Thousands of young people gathered in Lenin Square (presently Republic Square) early on 24 April, 1965.  They refused to comply with a dispersal order made by the police, and marched through the city. They reached the pantheon where they laid down flowers at the monument dedicated to Komitas, a composer and genocide survivor who is highly honoured by all Armenians.

Afterwards they returned to the square. Some posters also appeared there: ‘Our Lands’, ‘We Want Our Lands Back’ and ‘We Recognize Genocide’. 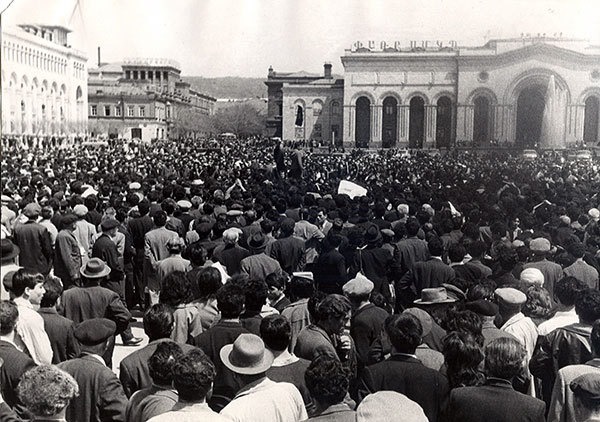 Meanwhile, an official party meeting was underway in the Opera House. The rally participants went to the square outside the Opera House, where clashes with the police occurred. The Opera House windows were broken by stones which were thrown, and several people were injured (including Vruir Sargsyan, a journalist and editor of the Vecherniy Yerevan [Evening Yerevan] newspaper).

Police used water cannons to disperse the rally, pouring cold water on the protesters. But they didn’t disperse (whereas the party meeting which was underway in the hall was disrupted).

The Armenian leadership found itself in a difficult situation. There was a risk of interference from Moscow: troops could have been brought into the city to suppress the riot.

Eventually, Moscow demanded the prosecution of thousands of citizens and organization of show trials, but the Armenian authorities ignored those demands.

On 25 April, a special delegation arrived from Moscow, but the situation in Yerevan had already calmed down. Even the Opera House windows were replaced. Finally, some fictitious penalties were imposed, for example, a reprimand was issued over poorly organized opera house security.

Back in 1964 the Armenian authorities (led by Hakob [Jacob] Zarobyan, 1st Secretary of the Communist Party of Armenia) sent a letter of appeal to Moscow, proposing to organize ‘events commemorating the 50th anniversary of the Armenian mass pogroms’, including the publication of books and articles, the release of films and radio programs, as well as the erection of a memorial complex. 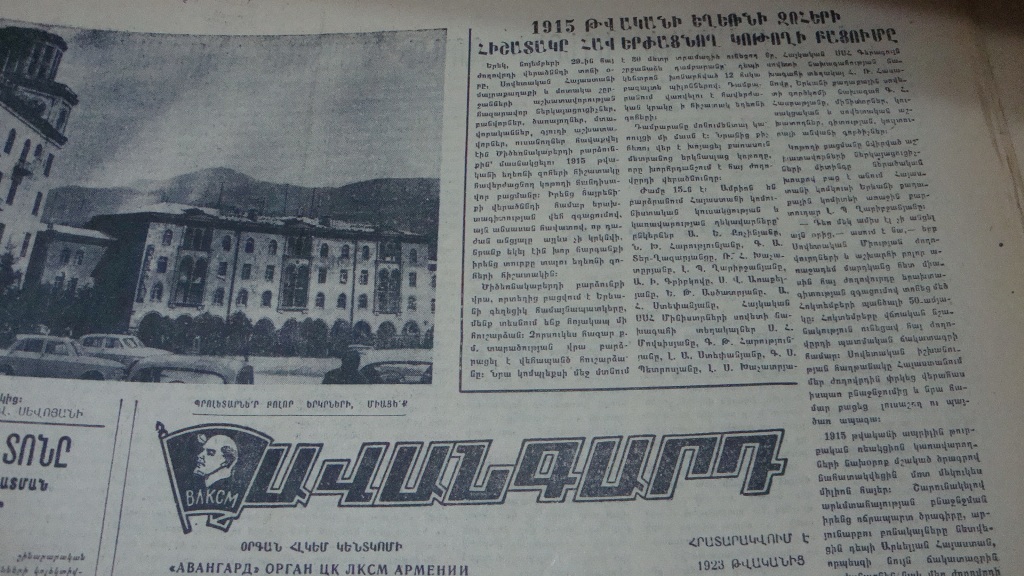 Almost all of the aforesaid items were implemented a few years later. The determination to pay tribute to the memory of the genocide victims has become one of the episodes of the national revival. Thus, Jacov Zarobyan went down in history as a man who found the courage to take the brunt of the blow and not to deploy troops against his own people.

Moreover, he used daring demands for the return of the territories as a means for exerting certain pressure on Moscow and for diplomatic maneuvering.

As a result, the popular revolt gave an incentive for getting permission for the construction of a memorial centre.

The Armenian Genocide Memorial, which is located on Tsitsernakaberd hill in Yerevan, has an interesting background. Although it is modernist and even revolutionary in its shape and idea, it is essentially tightly linked to the Soviet ideology.

Nowadays no-one remembers the justification that was prompted by the requirements of that time, but it was absolutely necessary in that period. The Armenian authorities managed to take advantage of the conceptual ‘gaps’ in the Soviet ideology.

The Memorial’s opening ceremony was held on 29 November 1967, on the 47th anniversary of the establishment of Soviet rule in Armenia.

It was decided to shift the focus to the future rather than the past, and to name the complex The Revival (certainly attributing it to the USSR). Two architectural components of the memorial (the Memorial Hall and The Revival obelisk) were generally named as The Revival.

Merging the calendar dates is a very wise decision in general, since it allows for additional meaning to be attached to it, and, in many cases, provide a new spin to the proclaimed official holiday. Two historical events were linked to each other, two images of Armenia: exhausted and broken, with its people subjected to genocide in the past, and protected, prosperous and happy now. Armenia that has survived and is reviving.

The sky-rocketing, simple-shaped monument with its eternal fire has become Armenia’s most important shrine.

The Tsitsernakaberd Memorial Complex was already a fait accompli, which gained union-wide importance and was broadly covered in mass media. It’s the mass media that helps people understand how creatively they tried to position the national issue into the national context.

In their lofty and pathetic texts, the Soviet Armenian newspapers wrote about the creation of an ‘eternally living monument to the unburied martyrs’, as well as ‘prosperity in a close-knit family of fraternal nations’.

The Soviet Armenian newspapers wrote as follows: “The heart of each person visiting this monument is filled with a hatred of evil, war and genocide, as well as with a deep gratitude for the system and party that saved our nation from disaster.”

Тhe newspaper also added an international emphasis: “This monument is a protest against the imperialistic policy not only of the past, but also of the present,  as well as against any manifestation of genocide.”

So, this modernist, multi-layer and meaningful message with a subtext marked the opening of the symbol of memory of the Armenian genocide victims.

The power of non-indifferent people

The wall of silence was destroyed and the genocide issue was put on the public agenda: Scientific research commenced, books and documents were published and  the Memorial Complex of the Genocide Victims finally turned into a museum-institute, where various countries’ archives were studied.