Foreign Ministers of Armenia and Azerbaijan Zohrab Mnatsakanyan and Elmar Mammadyarov met in Washington on June 20 to discuss the Karabakh conflict.

For the first time, a meeting of the foreign ministers and the OSCE Minsk Group co-chairs was held in the United States.

After the negotiations, the mediators published a statement – this time, they called on Armenia and Azerbaijan to refrain from provocations on the line of contact, which seems to be a step back, given as recently as January 2019, the foreign ministers agreed to “prepare the population for peace.”

The official statement says that the participants exchanged views on major issues and the current situation of the peace process.

The parties raised the issue of tension on the contact line. It was agreed to take steps to overcome the current situation and create an atmosphere of peace. 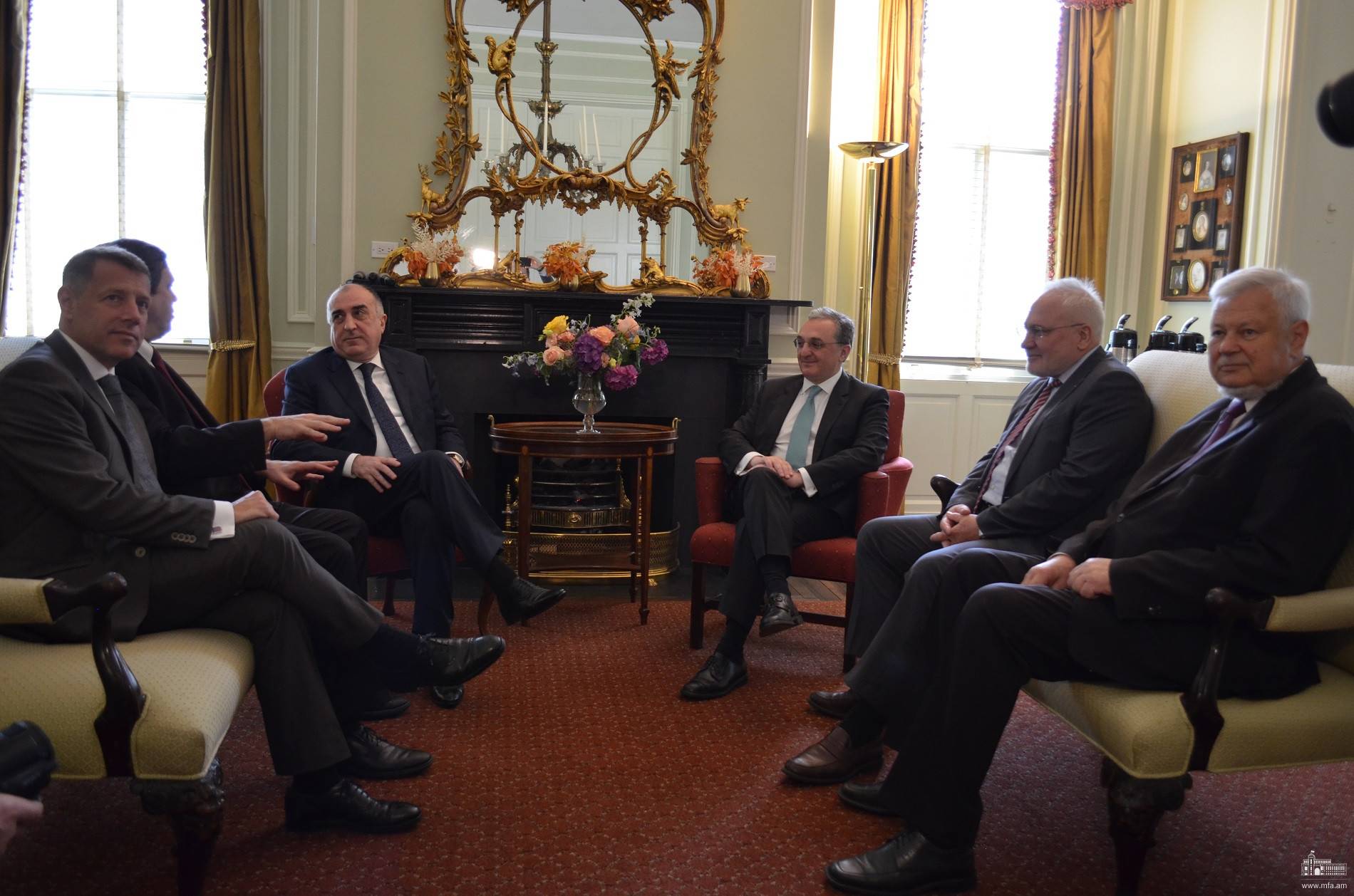 Details of the co-chairs statement

The Co-Chairs of the OSCE Minsk Group in connection with the recent tension on the contact line called on the parties to the Nagorno-Karabakh conflict to:

Lately there have been an increasing number of reports on violations of the cease-fire regime on both the Armenian and Azerbaijani sides. Periodically, the media in both Armenia and Azerbaijan receive information about the deaths of servicemen which the other side denies.

“Noting with regret the recent losses, the co-chairs urged the parties to take immediate steps to restore an atmosphere conducive to peace and conducive to substantive negotiations,” the OSCE Minsk Group statement said.

There is also information that the foreign ministers, in turn, explained their countries’ positions and expectations regarding the implementation of the humanitarian and security measures proposed by the mediators during their recent visit to the region.

They also agreed to continue consultations in the coming months under the auspices of the OSCE Minsk Group.

The Armenian Foreign Ministry issued the following message at the end of the negotiations:

“The Armenian side stressed the importance of implementing measures to strengthen the ceasefire and reduce the risk of tension in order to prevent incidents and to respond quickly. The principal positions and approaches of the Armenian side in the peace process were also reaffirmed.”

Political observer Hakob Badalyan notes that the atmosphere that Azerbaijan creates before each meeting, violating the truce regime, adversely affects the overall situation.

Badalyan says concrete steps must be taken so that the atmosphere of tension can be reduced:

“We are talking, in particular, about the Vienna agenda, about the mechanisms for violating the cease-fire regime, and Yerevan has brought up the existence of these mechanisms more often in recent days. We need to put this issue on the agenda, because, as we see, Azerbaijan is trying to create some kind of tension and threat every time.”

Badalyan says Yerevan should react more harshly to blackmail by Azerbaijan in order to stop any attempts of provocative actions:

“It should be noted that after the ‘velvet revolution’ Armenia intended to go beyond the so-called Madrid principles.”

This, Badalyan says, is the most important issue. He is convinced that if Armenia cannot achieve this, it will allow Azerbaijan to continue playing by its own rules.

Military expert Leonid Nersisyan believes that the meeting in Washington is not much different from other meetings of the foreign ministers of the two countries. In his opinion, it was naive to expect any breakthrough:

“There are no signs that we should have witnessed a breakthrough. Azerbaijan is not ready, and it is unlikely that in the foreseeable future it will be ready for any real concessions regarding the internationally recognized independent status of Artsakh.”

As for the venue of the meeting and the initiative of Washington, Nersisyan believes that the US authorities are trying to promote their interests in this way:

“Some activation of Washington is connected with an attempt to involve Yerevan and Baku in the blockade of Iran through the settlement of differences between the parties. However, the likelihood of such a scenario is scanty.”

Azerbaijani Foreign Minister Elmar Mammadyarov said that he had not heard anything significant, and that there were still serious disagreements.

“For 15 years we have been seeing the same ideas, the same peace plan,” he says.

At the same time, Mamedyarov considers:

“We understand that it is necessary to show more political will. The situation on the line of contact should not impede progress towards a declaration or a peace treaty.”

Azerbaijani experts initially did not expect anything interesting from the talks. The talks only justified their initial opinion.

“The process is, alas, not in the effective phase,” political scientist Ilgar Velizade states.

He recalls that at the last meeting in Moscow, humanitarian steps were discussed, in particular – a meeting of hostages with their families and mutual visits of journalists from Armenia and Azerbaijan.

But so far these agreements have not been implemented, but there is an aggravation on the front line, and the level of trust of the countries towards each other has decreased. All this indicates that the parties are far from coming to an agreement and are intensively preparing for military action.

“It is likely that in these conditions the negotiation process will proceed according to its own, not always understandable logic, but real processes will occur on the front line,” Velizade assumes.

Head of the Atlas political research center, Elkhan Shahinoglu, also believes that the meeting in Washington did not bring any results. In addition, he said that “despite the fact that for the first time in many years, a similar meeting was organized in the United States…this does not mean that the United States have become more actively involved in resolving the Karabakh issue.

“Washington is simply making it clear to Russia that America has an interest in the South Caucasus,” said Shahinoglu.

The situation before the negotiations

After the Velvet Revolution in Armenia in the spring of 2018, negotiations between the two countries intensified.

And after a short meeting of the new Prime Minister of Armenia Nikol Pashinyan and the President of Azerbaijan Ilham Aliyev on the margins of the CIS summit in Dushanbe in September 2018, a serious decline in tension was observed in the conflict zone.

At the same time, the Armenian prime minister has his own vision of the continuation of the talks, which he declared immediately after taking office. He insists that the representatives of Nagorno-Karabakh return to the negotiating table.

He states that this is not a whim, but a necessity: he says he is authorized to speak on behalf of the people of Armenia, but not Karabakh, as they did not elect him. The Azerbaijani side is categorically against the continuation of negotiations in this format.

As for the meetings of foreign ministers, the Washington meeting of Zohrab Mnatsakanyan and Elmar Mamedyarov is far from the first.

During the meeting in Paris in January 2019, they agreed to prepare the population of the countries for peace. And during the April meeting in Moscow, the ministers managed to make further progress in the negotiation process.

Then the heads of the foreign ministries of Armenia and Azerbaijan “expressed their readiness to begin practical work on establishing contacts between people, including reciprocal visits by media representatives,” said a statement published on the Russian MFA website after the talks.

Moreover, Mnatsakanyan and Mammadyarov discussed the situation on the border and the opportunity to establish cooperation in the humanitarian field:

“They [the ministers] also agreed on a reciprocal basis to take measures for the admission of relatives to persons imprisoned in the territory of the parties”.