Armenia: The one who brought bread has died

The situation in Yerevan is tense-most of the public has sharply reacted to the death of Artur Sargsyan on March 16. The latter became popular after the confrontation between the opposition armed group and the police, in Yerevan, in 2016.

On July 17, 2016, an armed group seized Armenian patrol police regiment in Yerevan outskirts, demanding release of Jirair Sefilian, an oppositionist, who had been arrested 1 month before the incident, as well as resignation of the Armenian President, Serzh Sargsyan.

The confrontation lasted for more than 2 weeks. 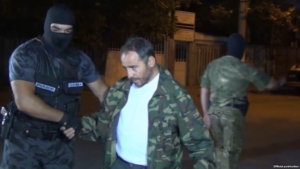 Varuzhan Avetisyan, a members of ‘Sasna Tsrer’ group…stated on Facebook about  the beginning of an armed uprising and called for mobilization of the people. ‘The revolution has begun, join us!’, he wrote, calling on people to take to the streets and start overthrowing the government.

Here is JAMnews report on the developments in July 2016.

Artur Sargsyan appeared on the incident scene on July 26. He drove his car at a high speed amid police fire and broke through the police cordon to the sieged group. As he explained later, the only goal he sought was to deliver food to the oppositionists, who had been starving for days due to the siege.

Artur Sargsyan became incredibly popular after this story, having been nicknamed as ‘Hats Berogh’, which means ‘a bread-bringer. However, he was arrested and charged with ‘seizure and retention of an administrative building of this regiment and the adjacent area.’ At first he was released on his own recognizance. However, later, on February 9, 2017, he was accused of a breach of conditions of the written undertaking not to leave the place and sentenced to 2-month pre-trial detention. In response to that, Artur Sargsyan went on a hunger strike, which lasted for 25 days.

However, on March 15, Sargsyan was taken to hospital in critical condition and was immediately operated the same night. Despite the efforts, the medics couldn’t save his life. So, on March 16, ‘Ats Berokh’ died, officially from heart failure.

The activists have blamed the authorities for his death and now demand to hold liable the heads of the state agencies, who contributed to his arrest.

Justice Minister, Arpine Hovhannisyan and Health Minister, Levon Altunian, are named among the guilty. The activists insist on their dismissal.

Activists also demand that Artur Sargsyan be buried in ‘Yerablur’ military pantheon, since he was a veteran of 1991-1994 Karabakh war. 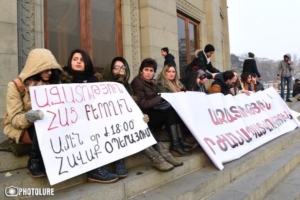 A group of activists continued a sit-in picket in Artur Sargsyan’s support on the Freedom Square, in Yerevan, from February 27 till March 6 (the day when he was released).

On March 2, the ‘Counterstrike’ art-group painted a graffiti with a demand of Artur Sargsyan’s release on the parliament’s boundary wall.

On March 16, on the day of Artur Sargsyan’s death, about 100 people marched down the central streets of the Armenian capital despite the pouring rain, calling on the citizens to join a campaign in the memory of Artur Sargsyan.

Whereas on March 17, there were already over 200,000 protesters, who joined a march in Yerevan. They were blocking the traffic from time to time, holding brief sit-in rallies. Having reached the government building on the Republic Square, the rally organizers passed to the Cabinet of Ministers their demand to bury Artur Sargsyan at the ‘Yerablur’ military pantheon. Hayk Zograbyan, Armenian Premier’s Advisor, promised to respond to their demand the next day.

30 activists launched a sit-in picket at the Freedom Square on the same day. They claimed, they were going to gradually achieve the fulfillment of their demands.

On Saturday, March 18, none of the government officials came to the protesters to inform them about the government’s decision with regard to Sargsyan’s burial issue. The activists attempted to block traffic on the Republic Square in a token of protest, but the police used force and drove them away from the carriageway.

Then the activists returned to the Freedom Square and claimed, they would continue their protest and would call on population to get engaged in mass rallies of civil disobedience.

Why are the Health and Justice Ministers to be blamed?

Because Artur Sargsyan suffered Bekhterev’s disease, which is included in the Cabinet of Ministers’ approved list of the diseases incompatible with incarceration. But he was detained anyway.

In addition, Artur Sargsyan had previously undergone a spinal prosthetics surgery. During his first detention, he was diagnosed gastric and esophageal erosions, as well as esophagus rupture, by the prison medics. As a result, Artur Sargsyan suffered internal hemorrhage and bloody vomiting.

Was it a hunger strike that caused Artur Sargsyan’s death? The post-mortem examination findings will be made public in the near future. But arguably, the hunger strike hastened the death of the person with such diseases.

What do social media users write 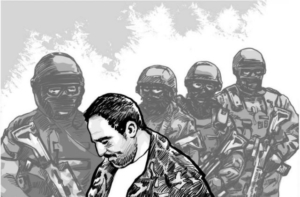 Judging by the publications on Armenian social media, the major part of the community perceives it as personal tragedy.

“The Republican Party has expressed condolences over Artur Sargsyan’s death. Are you kidding? Do you first kill the man and then express condolences? Where were those Republicans, when Artur was on a hunger strike for 25 days? Where were the Republican MPs, when collection of signatures was initiated to support Artur? You’d better show restraint at least now, your cynicism has no limits!’

“You [the authorities] didn’t kill Artur, but rather the last drop of patience. We aren’t going to wait any further, we will start preparing!”

Trend 2: It was public indifference that killed Artur

“It wasn’t the government, but rather we and our cowardice, that killed him”.

“Artur died. The regime killed him, whereas we let it happen!”

“By his death, Artur challenged the swamp, which is regard as a political system. It’s a challenge not only to the ruling party, but also to all those forces that refer to themselves as opposition. He has won. And now it’s up to us to choose, whether we participate in this political hypocrisy or not!”

“Those, who have respect for Artur’s memory, should boycott the election, the disruption of which was his final program.”

“It would be nice if all those candidates, who know the true value of bread, publicly quit the election race.”