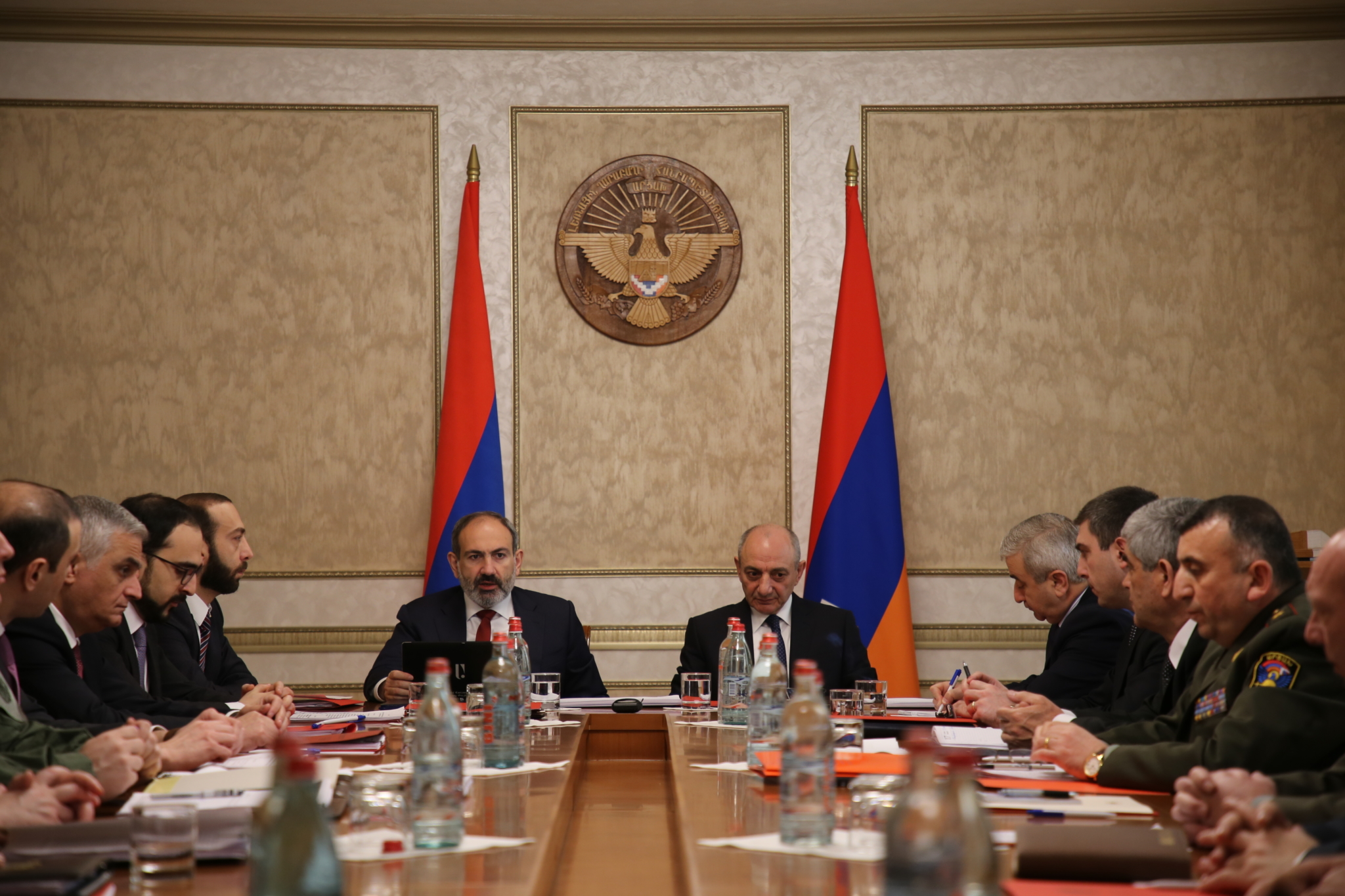 The Armenian authorities have not commented on the reasons for such a decision as yet.

However, the Armenian media and observers note that the meeting of the Security Council of Armenia was held at the same time as large-scale military exercises in Azerbaijan.

Many in Armenia believe that in this way, Yerevan wanted to give a signal to Baku.

The Armenian Foreign Ministry and the Ministry of Defence of the country have already stated that the purpose of the exercises is to exert pressure on Armenia on the eve of the Pashinyan-Aliyev meeting.

News that the two heads of state would have an official meeting was announced in February.

Earlier, the leaders of the countries managed to hold several informal meetings at which they discussed the further course of the negotiation process.

At the joint meeting, Armenian Prime Minister Nikol Pashinyan spoke of the importance of including Nagorno-Karabakh at the negotiation table.

“We highly appreciate the efforts being made by the OSCE Minsk Group co-chair countries in the settlement process, but the main question is who represents the people of Artsakh in the negotiation process … The fact is that today there is no legitimate, authorized representative of Artsakh at the negotiating table.

“On several occasions I have said that the prime minister of Armenia does not have such powers … And this is not a whim, not a precondition, but a question of legitimacy, and legitimacy is a key factor in modern relations – not only in domestic political [relations], but also in interstate, international relations … all comments [to the effect] that the Republic of Armenia or the Prime Minister absolve themselves of responsibility and leave it solely on the authorities or the people of Artsakh are absurd … I consider it necessary to emphasize that the Republic of Armenia was, is and will be the main guarantor of the security of Artsakh and will continue to participate in the peace process.”

The Foreign Ministry of Nagorno-Karabakh agrees with the position of the Armenian Prime Minister.

“Back in 1993, in the documents discussed in the framework of the Minsk process, Nagorno-Karabakh is indicated as a full-fledged party to the conflict. Final clarity on this issue was introduced at the CSCE/OSCE summit in Budapest in 1994. According to the final document of the Budapest Summit, the parties to the conflict are the parties that have confirmed the cease-fire agreement of 12 May 1994. This agreement on a full ceasefire and military actions was concluded between Nagorno-Karabakh, Azerbaijan and Armenia,” said Artak Nersisyan, the head of the Department of Information and Public Relations of the Nagorno-Karabakh Foreign Ministry.

President Bako Sahakyan also raised the issue of the participation of Nagorno-Karabakh in the negotiation process in his speech at the Security Council meeting and said:

“Artsakh is ready to continue making its constructive contribution to the negotiation process aimed at establishing a durable and lasting peace in the region.”

Observers and experts sound off

Political commentator Hakob Badalyan commented on the position of the OSCE Minsk Group:

“This group has long been performing not a mediation mission for settlement, but a kind of arbitration and is trying to control the political process. In this statement, once again, what may be seen between the lines may be interesting for us: the issue itself is solved by the competitiveness of Armenia and Azerbaijan in the military-political sphere, including economic abilities.

“And the Minsk Group, by and large, recognizes the status quo, which was formed as a result of this competition … and our task as a society, as a state, is to ensure our competitiveness. Do not allow Azerbaijan to surpass us as much as we have allowed it to in the previous two decades. There can be no imbalance in the military-technical capabilities, or economic, as well as in terms of political and diplomatic relations with the power centres.”

Hakob Badalyan commented on the holding of the joint meeting of the Security Councils of Armenia and Nagorno-Karabakh in parallel with large-scale, offensive exercises of the Armed Forces of Azerbaijan near the borders of Nagorno-Karabakh:

“This is a political step and a signal that says that speaking with Armenia in the language of blackmail will not work. And this is the right strategy. Baku spoke in the language of blackmail and remained unanswered. This led to Azerbaijan receiving the right to war, even the blitz war [ed. the 4-day war of April 2016], and in fact it got away with it. Fortunately, the Armenian Armed Forces and the voluntary public movement did not allow Azerbaijan to turn this right into a result.”

On 11 March, the Azerbaijani armed forces launched large-scale exercises near the line of contact which will last for four days.

The Azerbaijani Ministry of Defence reported that “up to 10,000 military personnel, up to 500 tanks, armored vehicles, including automotive and special vehicles, up to 300 rocket and artillery installations of various calibers, multiple rocket launch systems and mortars, up to 20 army units and front-line aircraft” were participating in the drills.

“Baku has once again decided to demonstrate its muscles on the eve of the appointed talks, and this time the scale of the exercise exceeds the past. Surely this is intended to put pressure on the Armenian public.

“Recently, we’ve begun to hear the line “we will not yield land to Azerbaijan” [in Armenia] more often, it is curious that such slogans did not sound for all these 25 years after the cease-fire. Surely, parents whose children serve on the front line, and according to the Azerbaijani side, several thousand Armenian citizens serves in the internationally recognized territory of Azerbaijan (including the Prime Minister’s son), are not interested in a new war.

“It is interesting to observe that some of yesterday’s Azerbaijani ‘peacekeepers’ have also begun to voice radical appeals lately,” said JAMnews political commentator Shahin Rzayev.

“The very idea of holding talks at the highest level can only be welcomed. However, the ease with which Pashinyan managed to overthrow Serzh Sargsyan’s regime and establish himself at the peak of power, apparently inspired the present Armenian Prime Minister with exaggerated ideas about his own abilities and erroneous judgments about the possible limits in politics.

“From Baku they have stated unequivocally and at all levels that representatives of the puppet separatist regime would not be tolerated at the negotiating table. Moscow, through the mouth of the Foreign Ministry, has stated diplomatically that it has no objections, but the consent of Azerbaijan is necessary, which, as we know, will not allow it. In Brussels, Pashinyan, while speaking with EU President Tusk, EU Foreign Minister Mogherini and European Commissioner Hahn said that the change in the negotiation format proposed by Pashinyan rejects the process of peaceful settlement and will not receive support.

“As for Pashinyan’s demagogic rhetoric about the need to hear the voice of Nagorno-Karabakh, he should be reminded that its population is not made up of only Armenians, but almost 50 thousand Azerbaijanis expelled from their homes and deprived of the opportunity to live on their land in peace and security. In the future, both Karabakh communities in the dialogue should determine the status of the territory, which is stipulated in the negotiation format,” said Rasim Musabekov, a member of the Azerbaijani parliament.