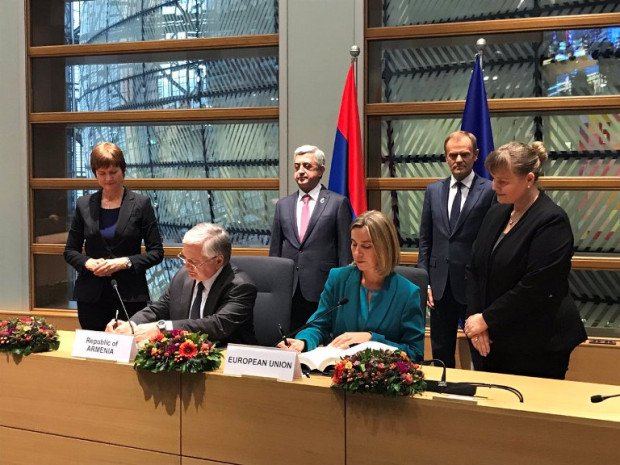 Armenia and the European Union have signed the Comprehensive and Enhanced Partnership Agreement.

According to the agreement signed in Brussels during the Fifth Eastern Partnership Summit, Armenia will continue to tackle reforms within the country and the European Union will facilitate this process.

In the President of Armenia’s opinion, the agreement reflects the significant development of bilateral relations in recent years and established the foundation for these ties to become stronger. Serzh Sargsyan believes this document is one of the most important in the 25 years of relations between Armenia and the European Union.

“This agreement is not just a legal document, but a reflection of the value system based on human rights and fundamental freedom which we idolize. It is based on such important provisions to strengthen democracy as the rule of law, to strengthen justice, and to develop effective governance of state and public institutions,” the head of the state said.

Recently, Russia’s critical position on Armenia’s decision has been discussed actively in both Yerevan and Moscow.

[su_quote] A comment that appeared on a Moscow TV channel recently: “Associating [with the European Union] isn’t the only thing that Armenia is doing like Ukraine. It’s hard to believe, but Yerevan has also made accomplices of fascism into heroes.”   [/su_quote]

The Russian Ambassador to Armenia, Ivan Volynkin expressed his opinion shortly after the agreement was signed. He said that Armenia is a sovereign state and has the right to participate in any agreements and associations that do not contradict the country’s obligations to the Eurasian Economic Union.

The ambassador also stressed that ‘the European Union cannot replace Russia in the matter of ensuring Armenia’s security’.

The signed document will come into force when the parliaments of Armenia and the EU member states ratify it. However, as Armenia’s Deputy Foreign Minister Karen Nazaryan said, some of the document’s provisions can be implemented immediately after signing, even before the parliaments of all countries ratify it.

Prior to the beginning of the summit, Serzh Sargsyan said in an interview with Radio Free Europe that this document is very important for Armenia:

“If it wasn’t important, we wouldn’t be signing it.”

Answering the question of how ordinary citizens would benefit from the signing of the agreement, the Armenian President said:

“The day after tomorrow they will probably feel nothing. But, in due time they will feel it, because we will be able to carry out reforms quickly with the European Union’s assistance. We have neither the ability, nor the desire to reinvent the wheel. We will be guided by absolute facts.”

The development and negotiation of this document has taken two years. The agreement was initiated in March 2017. Before and after the publication of the agreement’s contents however, Armenian experts doubted whether it would be signed. The reasoning for this was considered to be the events of 3 September 2013.

On that day, President Sargsyan stated that Armenia would follow a path of integration into the Eurasian economic zone. As a result, an association agreement for which negotiations had been held for three years, containing a broad and comprehensive trade area with the EU was not signed. In 2015, Armenia became a member of the EAEU.

According to experts, the events that unfolded four years ago were a result of Russian pressure. It has not been ruled out that history will repeat itself because Moscow will not reconcile itself with the multi-vector foreign policy of Armenia.

However, President Sargsyan gave personal assurance, particularly to Yerevan, that there has been no pressure on Armenia in ten years of cooperation:

“… I didn’t hear even half a word from the leadership of Russia, especially from President Putin that would contain criticism in connection with our cooperation with the European Union.”

As for the agreement itself, local and European experts say that the current document is inferior to the prior Association Agreement. But, it will still initiate serious reforms in Armenia, provided the authorities show the political will to implement them.

Experts believe that the agreement repeats excerpts from the political section of the Association Agreement, but doesn’t imply the creation of a wide and comprehensive trade zone that would allow Armenia to freely export and import goods from EU countries.