Registration of the initiative groups and political parties, that will be able then to nominate their MP candidates for March 12, 2017 parliamentary elections, is underway.

Up to now, the Central Election Commission (CEC) of Abkhazia has registered 104 initiative groups and 2 political parties – Amtsakhara and Aynar.  Other groups, willing to get on this list, have little time left – till February 10.

A detailed list of already registered candidates, with the electoral districts specified in it, has been published on the Apsnypress news agency website.

The electoral district #3 in Sukhum caused particular interest in public, since Alexander Ankvab, an outstanding figure in Abkhazia’s contemporary history, is among the candidates there. 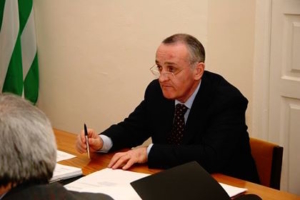 Alexander Ankvab was elected the President of Abkhazia in May 2011. He failed to maintain that post till the new election. A year before the election, under the pressure of mass rallies, resulting in the storm of the presidential place, he had to escape and hide in the Gudauta military base. Whereas 4 days later, he officially stepped down.

Up to now, the politician lived in Moscow. His present nomination as an MP candidate is an open return to politics after 2014.

As usual, in the beginning was the Word. A group of mothers, whose sons had laid down their lives for the motherland, requested Alexander Ankvab, former President of Abkhazia, ‘to get back to country’s political life and stand for the upcoming parliamentary election.

Then, a groups of people, representing arts and science intelligentsia, did the same thing.

The mothers and intellectuals were followed by politicians. Leaders of public and political organizations, mainly the oppositional ones, also applied to Alexander Zolotinskovich (patronymic) with similar request to run for parliament. In their opinion, such initiative will be ‘not only the beginning of overcoming split in the society, but will aslo actively promote legislative initiatives that are of crucial importance for Abkhazia.’

Whereas on a snowy Monday, January 30, the initiative group of Alexander Ankvab’s supporters, who overcame snow banks and ice-slick and underwent official registration with the CEC, nominated him as MP candidate in Sukhum electoral district #3.

There is no doubt, especially after such intensive preparations, that he is going to officially return to active political life.

But, frankly speaking, Ankvab has never left Abkhaz politics. Being in Moscow since the moment of his resignation, he certainly continued to influence the situation within Abkhazia. Ankvab actually made an invaluable contribution to the activity of the Bloc of opposition forces, that was relentlessly demanding President Raul Khajimba’s resignation over the past 2 years.

Nevertheless, the opposition eventually failed to achieve its loudly declared goals: to force Raul Khajimba resign from his post ahead of term.

After a high-profile scandal on December 15 and following the next round of confrontation between the authorities and the opposition, the sides came to peace, though to a fragile one, having reached a compromise agreement.

The opposition, or, to be precise, the major part of it, undertook a commitment not to demand the President’s early resignation in exchange for several posts in the Abkhaz governmental structures.

So, Alexander Zolotinskovich will now have to fit in this reality. How much he is ready for that is a rhetorical question.

I have no illusions that Ankvab’s return to active politics will help overcome the split. Everything is neglected so much in Abkhazia that I’m afraid, even the God could hardly help here.

The only undeniable advantage is that open involvement in the political processes is much better and more honest than participation in the behind-the-scenes activities.

In addition, Ankvab’s return is a challenge for the opposition, rather than for the authorities, because he is viewed by them as a negative element in any statuses and dimensions.

Continuous playing upon nostalgic feelings for the happy past, personified by the ‘hero of the day’, is anyway a deadlock. Conventional communism with its endless overabundance came to an end in Abkhazia along with Russian money back in the times of presidency of Alexander Zolotinskovich himself. If it hadn’t been for that, he would have still held that post.

Revenge, i.e. Ankvab’s return to the top of the power, is hardly possible, even if the whole nation wants it, because constitutional restrictions have not been abolished so far. The length of the residency requirement will be an obstacle alongside with the age limits necessary for the presidential candidates. As a reminder, Alexander Zolotinskovich is already 64.

Of course, using the former President’s reputation and influence, his hand-picked successor can be brought into power. However, he will not be the President of Abkhazia, but rather Ankvab’s appointee with all the concurrent irresponsibility, accompanying this role.

The opposition still has another way out. Let’s conventionally call it a pragmatic one. What actually united the Bloc of oppositional forces until now was the past – the developments of May 27, 2014, as a result of which Ankvab stopped being the president. Regrettably, this union was not further consolidated by any other common ideas, except for ‘fighting the fire with fire’.

Whereas now, in view of the December 15 agreement, it can be said that the opposition has a chance to look forward rather than to look back at the past – that is to generate ideas, elaborate development programs, offer, discuss and dispute. And that’s exactly what the Abkhazians need as a jolt of fresh air.

It’s certainly more difficult to do it. It’s easier to call people to rallies and hysterically shout ‘Soho!’ However, without this competition of ideas, neither the opposition nor the Abkhazian statehood have any future.

There are a lot of precedents when a nation had won a war and later its rulers pated away their achievements due to the lack of competitive ideas.  Of course, it is possible to sway their idols’ portraits and fight wall-to-wall for a certain period of time. But how productive it will be? That’s no longer a rhetorical question.

However, Alexander Ankvab has first to win the March parliamentary election.