Aliyev and Sargsyan's meeting in Geneva: results and consequences 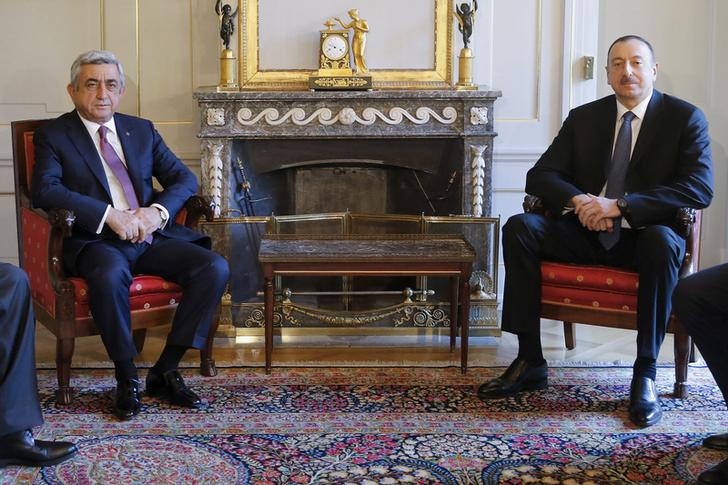 The fact alone that the Armenian and Azerbaijani presidents met in Geneva to negotiate on 16 October, more than a year after their last meeting in June of 2016, was enough to stir up public interest. The negotiation process has not since seen any breakthroughs, even though the two countries’ foreign ministers have met to talk – with the mediation of the OSCE Minsk Group co-chairmen – on several occasions during the time.

The latest meeting also took place via the OSCE Minsk group. Just several minutes after negotiations between Sargsyan and Aliyev had been concluded, a statement was released by the Minsk group press service which claimed that the meeting took place in a constructive atmosphere. The presidents further agreed to take measures to move the negotiation process forward and to apply additional efforts to lower the tension on the line of contact.

The co-chairmen expressed their satisfaction at the renewing of direct negotiations after a long pause, and also their readiness to continue their mediation in the negotiation process to peacefully regulate the Karabakh conflict.

JAMnews offers information and an assessment of the meeting from both Yerevan and Baku.

The view from Yerevan

Not only did Armenians not expect any breakthroughs to occur as a result of the renewed negotiations, but they didn’t even believe that the meetings themselves would be possible. After the co-chairmen of the Minsk group made a statement announcing that the presidents had agreed to renew negotiations, many didn’t quite believe it at first: why did Sargsyan agree to meet?

“Despite the latest statements from Azerbaijani officials, the president of Armenia remains faithful to the format of the negotiation process and will participate in the meetings.”

Ashotyan had a statement in mind which was made by Ilham Aliyev on 9 October. This was that the negotiation process would be renewed ‘without any preconditions’, as if Armenia meant to break off the negotiations, think up a few excuses so as not to move forward and put forward different conditions.

“However, I immediately said that not a single new condition would be accepted. Putting forward such conditions has put Armenia in a silly position and now they are forced to refuse such a policy,” Aliyev stated.

The answer of the Armenian side was heard directly from the press secretary of the president of Armenia, Vladimir Hakopyan.

“Several days before the meeting of the presidents, Azerbaijan was trying to create the illusion that it is coming to the negotiating table from a position of dictating conditions. Baku’s calculations are primitive – they can not escape their responsibility of fulfilling the arrangements and agreements that were made at previous summits.”

Many Armenian experts said that in such a way, Hakopyan confirmed that the Viennese agenda is still on the table and that it was Azerbaijan that had walked away from the negotiations and not fulfilled its ‘Viennese obligations’.

The Viennese Agreements were reached in May of 2016 after the end of the last round of escalations near the line of contact which came to be known as the ‘Four Day War’. Their essence is to introduce the incident investigation mechanisms of the OSCE along the border and to widen the powers and office of the OSCE representative.

Experts’ opinions on the results of the presidential meeting

“The meeting could doubtfully have made for progress in the negotiation process. But in light of Baku’s speculations that the ‘great diplomatic victories’ of Vienna and St. Petersburg have been forgotten, we should note the text of the statement that was released after the meeting. Its essence is that the political regulation of the conflict and the agreements reached in Vienna and St. Petersburg remain on the agenda. As to why there is no progress in either point is another question.”

Political observer Naira Hayrumyan says that it is important to note the statement of the Deputy Minister of Foreign Affairs of Armenia Shavarsh Kocharyan, which he released before this round of negotiations.

Shavarsh Kocharyan said that at the time, there was not even a hint of a possibility of progress in the negotiations and their main topic of concentration could only be the establishment of trust-building measures; however, such an agenda doesn’t work for Azerbaijan.

He also said that Baku is under international pressure. In particular, the Parliamentary Assembly of the Council of Europe has recently accepted two critical resolutions on Azerbaijan. In this situation, Azerbaijan has two possibilities: one is to accept the conditions of Armenia and the mediators and create an atmosphere of trust, which is to secure the current borders and begin negotiations, and the other option would be to completely reject the process.

But the second option may lead to international recognition of Karabakh, said Shavarsh Kocharyan.

Naira Hayrumyan believes that this statement of the deputy minister is very important:

“Practically, Shavarsh Kocharyan is placing a big fat period at the end of the ten-year history of negotiations in the format of Sargsyan-Aliyev. In their earlier statements from the podium of the UN, Sargsyan and Aliyev confirmed their complete disagreement with the approaches towards the resolution of the conflict: Armenia insists on peaceful self-determination, and Azerbaijan talks about its ability to restore its territorial integrity by might.

“Judging by this, Armenia’s position coincides with that of the mediators. Not long before the summit in Sochi, the State Department of the USA unexpectedly stated its priorities for the resolution of the Karabakh conflict, and highlighted the de-mining of Artsakh [Nagorno Karakbah] and the withdrawal of snipers. Not a word about the territories themselves.”

“The negotiation process of the past two decades was actually a simulation in which global centers of power solved their tasks. This period ended with the April war in 2016, after which the recognition of Artsakh was supposed to follow. And the process has already begun in any case, with the Vienna agenda and the statement by the US secretary of state. The confirmation of the de jure situation is a matter of time, and this time must be filled. Now they are working out new scenarios and simulations and the mediators would be happy if the sides decided upon this themselves.”

“The European commission, and then after it the Minister of Foreign Affairs of Armenia, published a paraphrased text of the framework agreement between Armenia and the European Union, which was supposed to be signed on 24 November in Bruxelles. It’s worth noting that the text was published on the same day that news was released about the meeting of the presidents of Armenia and Azerbaijan. At first glance, these two incidents are not closely linked together. But one should remember that it was just a few days ago that the representatives of the European Union were in Baku and were being threatened by Ilham Aliyev that he would leave the Council of Europe if the EU would continue to ignore the territorial integrity of Azerbaijan and openly support Armenia.

“The text of the agreement shows that the position of the EU has remained unchangeable, and Aliyev’s blackmail will not work.” 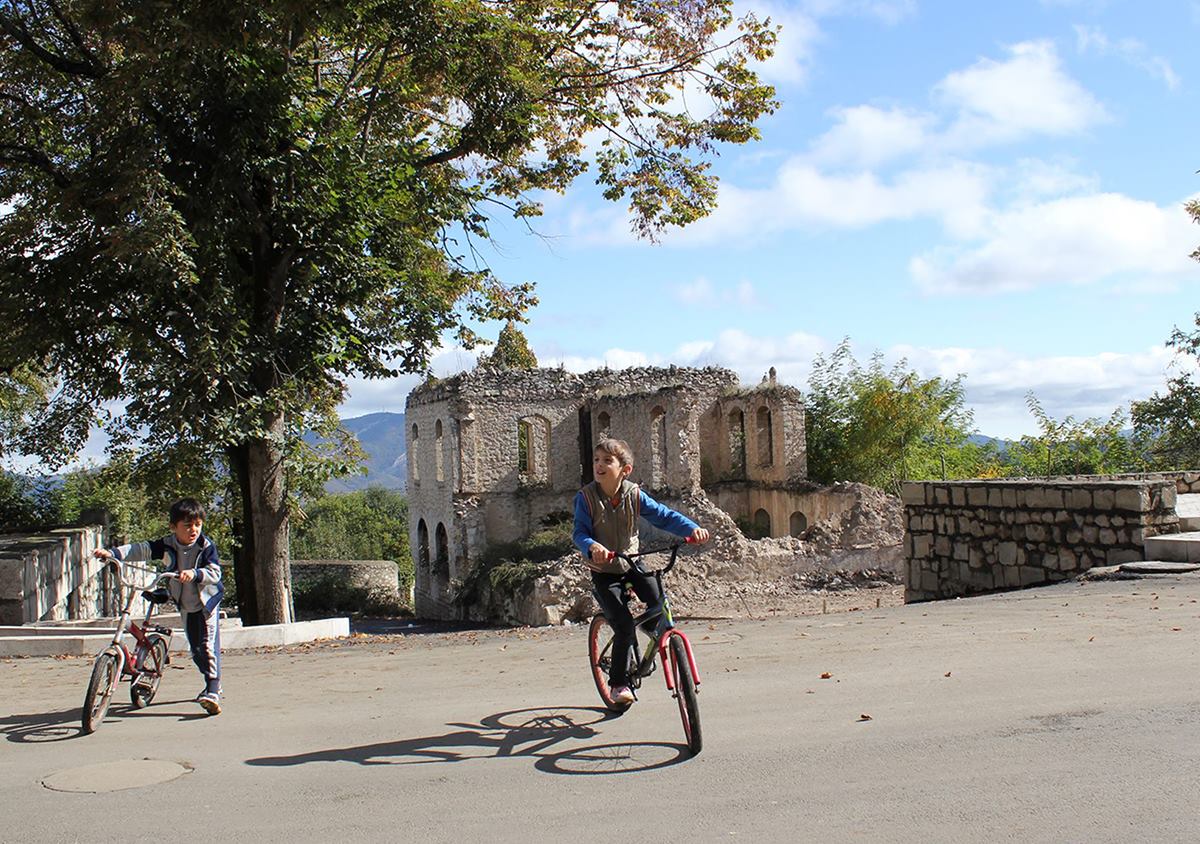 Likewise, in Azerbaijan there were no special expectations before the Geneva round of negotiations on the Karabakh conflict.

Speaking at a meeting of the cabinet of ministers last week, President Ilham Aliyev said that no progress had been made in the regulation of the Karabakh conflict, but he noted that the negotiation process would now be renewed. He underscored the fact that Baku would not accept any new conditions in order to have the negotiations renewed.

The press service of the Ministry of Foreign Affairs later stated that the Armenian side had agreed with the co-chairmans of the Minsk Group of the OSCE to return to the negotiating table without any preliminary conditions.

“Armenia has returned to the negotiating table as a result of international pressure,” MP Asim Mollazade said before the meeting. But he also expressed his doubts as to the perspectives for the negotiations.

“Azerbaijan wants peace. However, Armenia is not ready for peace and will not undertake any serious steps. At the most important moment, Armenia will ruin this process,” Mollazade told Trend news agency.

There was a large resonance in the Azerbaijani media amongst social media users to the words of Armenian President Serzh Sargsyan, which he said after the negotiations at a meeting with the representatives of Armenian society in Geneva:

“The only possible solution for us is for Karabakh to remain outside of Azerbaijan. Not a single Armenian leader will be able to make another decision,” the president’s press service cited him as saying.

The opinion of experts on the results of the presidential meeting

“In March of 2018, Armenia will move to a parliamentary system of government. That is, the presidential powers of Serzh Sargsyan are on the way out, and for that reason I don’t think that he is ready to make any big changes. Sargsyan has chased himself into a corner – to re-examine the policy of expansion would be equivalent to suicide. It is namely for that reason that Sargsyan speaks like a thunderbolt abroad and looks a bit paler when at home…”

“Serzh Sargsyan confirmed that there is no peaceful resolution for the conflict, while in Armenia the authorities and opposition are made up of politicians who combined their political capital on the theme of Karabakh. It’s just that Ter-Petrosyan and his supporters during the first wave, and Kocharyan and Serzh during the second.”

“It would be naive to await any serious breakthrough at this stage. At this point, neither side is interested. The leaders of the conflicting countries don’t have political will as did their predecessors, like Ter-Petrosyan and Heydar Aliyev. The USA, the EU and Russia are also busy with their own problems and other conflicts, [and] for that reason, the solution of this problem is not a priority for the mediators.”

“How long can we wait? They are already making fun of us, and after such an arrogant statement from Serzh they’re doing it again. In order not to embarrass ourselves and to stop hearing taunts about Azerbaijan, we have to begin a military operation. And no one will hep us, only we ourselves will be able to return our lands by force.”

“Do you remember the shooting in the Armenian parliament? [ed. 27 October 1999]. This was a period during which it would have been possible to sign some sort of document. Sargsyan is afraid of death. He’d rather any other politician be faced with it. This is a rather candid statement. Anyone who signs a peace agreement in Armenia will be killed.”