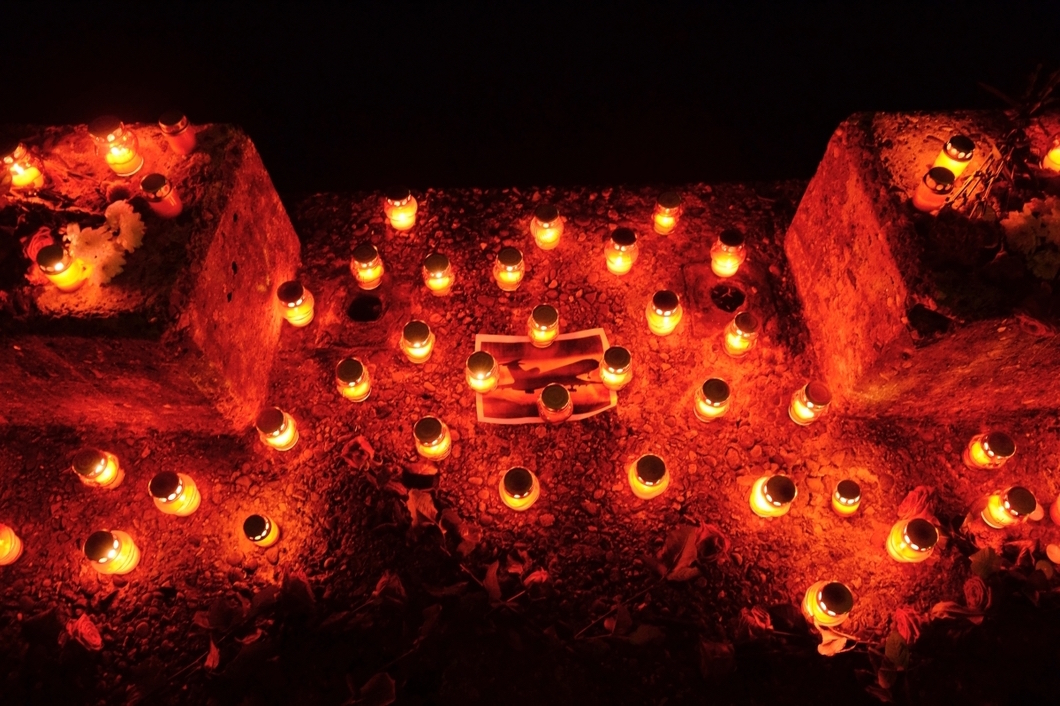 The Black Sea near Sochi is speckled with a chain of lights. 39 ships and 3,000 people, military men and employees of the Emergency Situations Ministry, are involved in search operation.

The search operation has been also launched on the coast of Abkhazia. The farthest point of search operation is 8 km off the coastline, the closest one – 1,5 km. 135 divers have been working in the water.  2 deep-water submersibles of the Russian Geographic Society have been delivered from Moscow.

14 bodies and 200 fragments of the fuselage wreckage have been found through the joint efforts so far. Found debris are taken to a hangar for the investigators, whereas the bodies and the plane fragments will be send to Moscow for genetic identification.

The victims’ relatives have started arriving in Sochi a few hours after the plane crash. Emergency Situations and Defense Ministry officials meet them right in the arrival hall and take them to the psychologists’ room. Afterwards the airport transport takes them to ‘Aurora’ military sanatorium.

However, the governmental commission has decided that bodies should be identified in Moscow.

The psychologists’ room on the upper floor of the airport resembles a school classroom –desks are arranged in rows. Lectures and trainings for the airport staff are delivered here in ‘peace times’.  Whereas now, there are the Emergency Situations Ministry officials in the two-tone red and gray jackets, as well as the military psychologists, sitting behind a transparent screen.

A short-stature woman in camouflage pours a glass of water for a young lady. The young lady is clinging to the edge of her handkerchief, wrapped around her head, as if she is afraid to let go of the fabric. The psychologist is holding the glass nearby.

A man in a gray sweater is dictating the relatives’ phone numbers in a sedate manner. His name is Yuri. His wife’s brother, Mikhail Vasin, 25, a soloist of the Aleksandrov Choir, and his girlfriend, Ralina Gilmanova, 22, a ballerina, were travelling on the same plane. Upon return from Syria, they were going to get married and had already notified their parents.

“Ralina’s mother is in Kazan, she’s absolutely done. The main question that bothers all of them is – how?’ Yuri finally breathed out. ‘Why? Can you tell it?’

“Everyone died,’ said the woman in camouflage. ‘Nobody knows anything so far. It’s all so vague.’

– They’d better find him,’ the woman said convincingly. – Otherwise, it may seem… Something, somehow. Believe me. The body is equally important.

The airport staff is not allowed to talk to journalists under the threat of dismissal.

Security measures have been toughened and the emergency response center has been organized in the airport, so the employees have been working in double shifts, without any rest, in defiance of common sense.

What has been known so far:  the weather was clear, it was a very ‘flight weather’, there was no sea storm, no unexpected wind over the water.

“Neither Krasnodar nor Anapa received the crafts, whereas we received and set them out.”

Several flights, previously delayed due to poor weather condition at the destination point, had been set out to Simferopol the same morning, just before TU-154.  The rest of the reports are at the level of rumors.

Flight dispatchers are interrogated by the investigators and the FSB (Federal Security Service) officers, they are not available for contact. Therefore, the Adler airport staff don’t have a unanimous opinion about the incident. However, they exclude with 100% probability the low-quality fuel version. “You know, the president’s plane is fueled here. So, it’s out of question.”

It is said that the plane was going to land in Mozdok for refueling, but due to the poor weather condition in Mozdok, the local airport refused to receive the flight. The plane was diverted to Sochi.

When in Sochi, a technician left the plane for refueling and two border guard officers came to check the passports. Neither the passengers nor the crew (except for the technician) left the plane. No cargo was loaded and no new passengers were taken on board. ‘If it’s a terrorist attack, it’s not from here’.

Sergey Kochergin, a driver, works for the ‘Airport’ hotel. The latter is now packed with the Emergency Situations Ministry officials and the military, but it is designed for the passengers of canceled flights, in general. Like almost all airport drivers, Sergey also has in his car a separate tablet with flightradar24, a program that shows the aircraft traffic and routes. This program allows them to drive up to flights on time.

– It was about 5:30a.m., I was smoking outside with a guy. The airport was right in front of us, and we could hear the sound of turbines. We heard the aircraft taking off… but the sound was different from what it should be. As if it was a Boeing or a jet plane taking off. The turbines were howling at full. We just got tensed. We looked at the Flightradar and it showed that the plane had taken off. But instead of following its route and turning left, in the direction of Abkhazia, and then further – to Syria, it headed to the right. And in a couple of minutes, somewhere between Kudepsta and Khosta (a coastal villages – E.K.) it disappeared from the radar.

We weren’t much disturbed, since we thought, it was a military craft and it had been just removed from radars and that’s it. Presidential planes aren’t displayed on our radars either.  We finished smoking and went to bed. And in the morning we learned that the plane crashed into the sea.

– Now I think that the pilot soon realized that there was something wrong with the plane and he tried to turn the plane around and timely return back, but he didn’t manage to do it. There were no oncoming aircrafts, so he didn’t have to dodge or change the course to avoid a collision, he just turned around. If you look at the search area, judging by the trajectory of debris it is obvious that the plane was approaching the seashore, trying to get back on the ground. And also, the plane crashed into the water at least 8 km off the coast. It there had been an explosion before that, it would have been audible. The city residents would have heard it. But there was no explosion.

Later, a source familiar with the course of investigation turned down the assumptions that the pilot had changed the course:

“The plane took off as it was supposed to. The planes now no longer fly via Turkey, they fly through Azerbaijan and Iran, and then head to Syria. It took off as scheduled, as it was planned. The flight dispatchers didn’t receive any alarm signal. However, it doesn’t mean anything at all.  There were many accidents in the history of Russian and world aviation, when aircraft with their crews fell down from a very high altitude, and the crew had been alive before the fall, the plane did not explode, didn’t fall apart in the air, and there was enough time, but there were no alarm signals.

The matter concerns a psycho-emotional condition of the crew of a crashing plane; they are busy with absolutely different things rather than caring about what others may think afterwards –they do their best to ensure that the aircraft remains in flight mode, that it doesn’t crash, fall, roll over. And it happened on the number of occasions that the crew fell from an altitude of 10,000 meters and didn’t communicate with dispatchers.

Simply the psychology works differently, in general. Someone may go into hysterics, someone may think of how to level off the plane, others may be deciding it between each other, it’s absolutely normal. It’s a very simple situation – you know with 99% probability that you are going to die within 30 seconds and neither a prayer, nor anything else will help you. Sometimes they don’t have time to contact a dispatcher.

No one has any versions now. To be more precise, they are always three standard versions- equipment, people and external factors: weather or terrorist attack. But what exactly happened and how? We won’t understand it until we extract and decipher the flight recorder (black box).”

The city didn’t get a chance to put out festive illumination. Despite the mourning, there are colorful “Happy New Year” inscriptions, flickering here and there against the background of the palm trees. Night Sochi is shining, the search ship lights are almost not visible from its streets.

People in Sochi refer to the accident as ‘a catastrophe.’ But then they immediately make it clear that it could have been worse.

– All planes, that are landing and taking off,  all of them fly over Adler. We have got used to it. We consider, or at least considered it to be safe. If it had fallen down on the city…

Sochi residents are also concerned about the mountain ski season, that was opened 5 days ago. The hotels in Krasnaya Polyana (Sochi’s urban locality) are 100% packed, the rest of the hotels are expecting the visitors. You can’t even imagine what the ‘plane crash’ in the tourist city is.

The city mayor tasked the administration officials and the police officers to go to the sea shore at the crack of dawn and ‘search for what the water may bring.’

At 9 a.m., the plane with the crash victims’ bodies landed in Moscow’s Chkalovskiy military airfield, from which TU-154 had taken off the day before.

As the Transport Minister Sokolov announced at the news conference following the working meeting, the terrorist attack version was practically excluded and there was no need toughening the security measures at the airports. Technical malfunction or the pilot error have been named as the key versions.