For many Armenian women, the New Year is a period of active cooking of dishes for the New Year table. However, there are also those, who earn on this. They take orders for pancakes, for ‘ishli kyufta’ that has become very popular in recent years, and for chicken Kiev cutlets. Some are specialized in dried fruit, others sell home-made basturma and sujuk.

Hasmik Mkrtchyan, 43, Echmiadzin native, jokingly says that December marks the beginning of a hot and profitable period of her seasonal work [in contrast to the seasonal work of the men, who leave the country to earn their living and return home in December]. 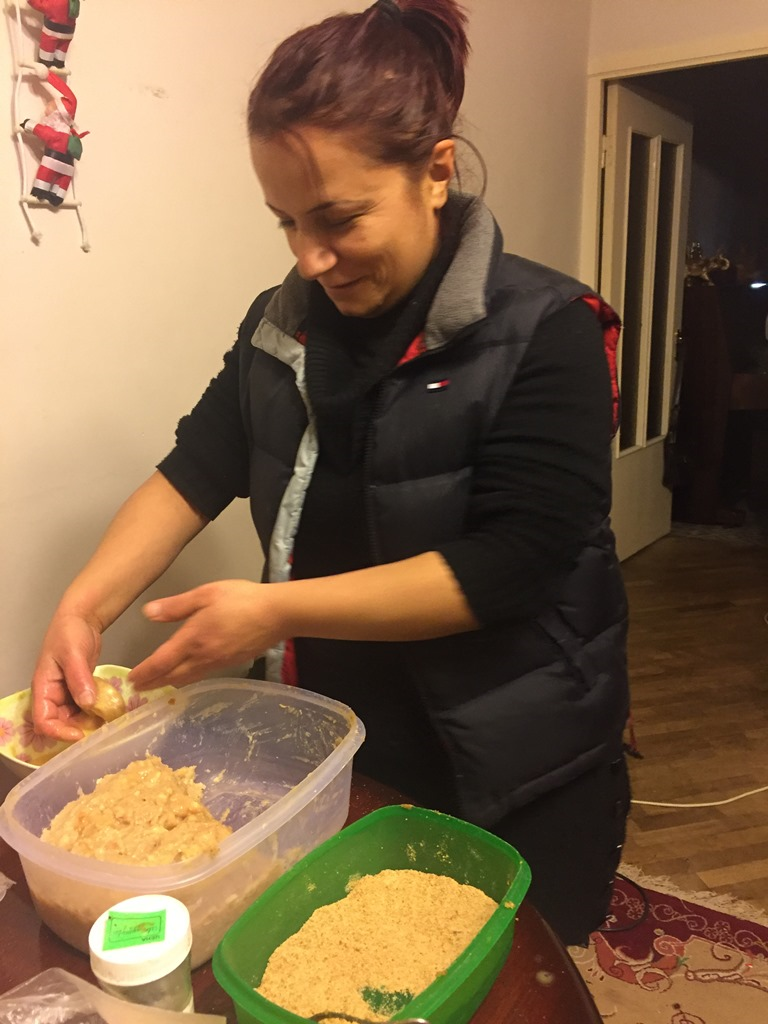 There is a real mess in Hasmik’s kitchen. However, she, as an experienced master, knows exactly where the things she needs are. Chicken Kiev are sort of ‘born’ in a twinkling in her nimble hands. She works quickly and with a smiling face. She says that despite the overwork, she cooks with pleasure, generously seasoning cutlets and kyufta with positive energy: 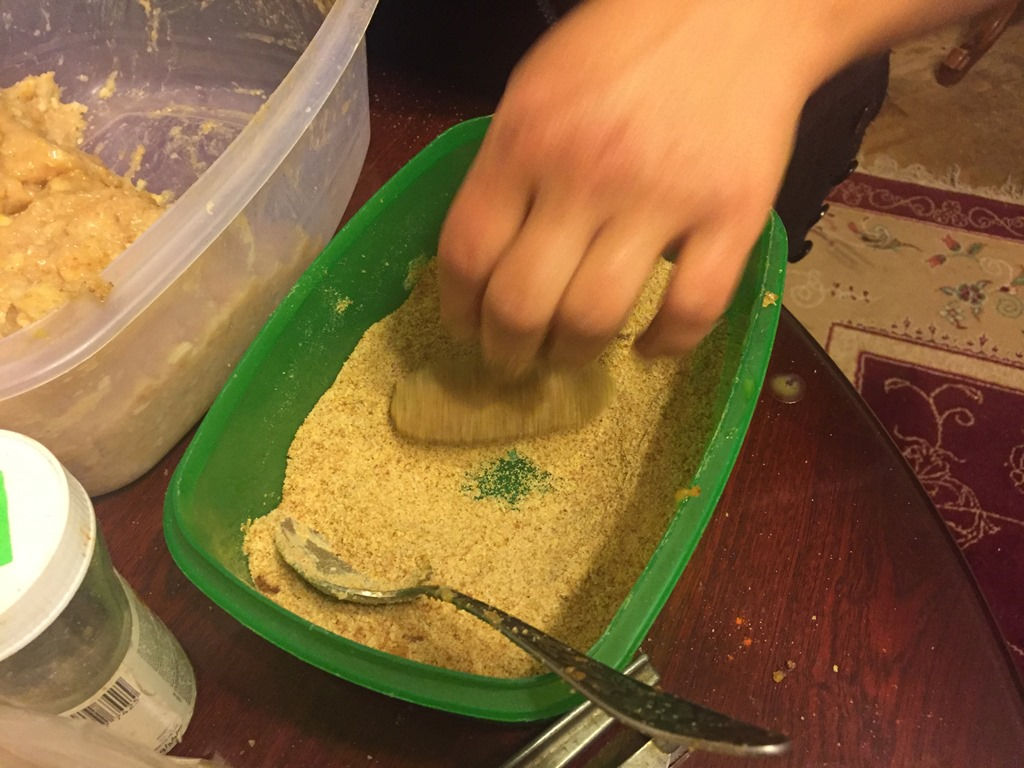 “Of course, I get tired, but what to do: there will be no such chance during the year. I prepare part of the orders at home and another part- at the clients’ place, upon their wish. I prepared as many as 2,000 kyuftas throughout December. Finally I felt that I had no control of my hands. It’s hard to stay awake at nights, try to please everyone and maintain one’s clientage.”

One portion makes about 100-130 ishli kyuftas. If Hasmik cooks them at home, she charges AMD250 per piece (approximately US$0,50), because she buys products herself. Whereas, if she cooks at a client’s place, she is paid trice less per piece.

“The only thing I take along are spices and grits, which largely determine the quality of dish. When people learn that I charge AMD250 per piece, they find it expensive, but it actually makes the same. I earn AMD20,000 (US$41) per day. People mostly order 1 or 1,5 portion,” says the mother of three children. She starts preparing the chicken Kiev that she sells at AMD200 (approximately US$0,40) each.

Maro Sargsyan, 45, is also engaged in this business. She is from the Syrian repatriants’ family, who moved to Armenia in 1947. Maro cooks everything in accordance with the traditions that are customary in the eastern cuisine.

“Those were Syrian Armenians who brought ‘ishli kyufta’ here. I inherited the recipe secrets from my mother and grandmother. Earlier, this dish was mostly cooked by Syrian Armenians. However, the locals have also started cooking it in recent years. It has become very popular nowadays and it could be found on the New Year table almost in each and every family,” she says.

Maro gets down to work. She adds minced meat to already soaked grits and starts kneading it with her strong, nimble hands. A chaos in the bowl is gradually transformed into a full idyll. Maro’s hands are moving fast, from right to left and then from left to right. She seems to be making great efforts, but she continues with a smile on her face:

“On the side note, in Syria, this part of job was done by a man, since it requires a great deal of strength. This stage is of particular importance: a taste of the dish largely depends on it. Grits should be mixed with meat so that the latter could absorb well its particles,” says Maro.

The ‘well-tanned’ Armenian fruits are also sold well ahead of the New Year. Hasmik Mkrtchyan says, her friends and relatives living in Russia also bought her dried fruits this year. She sold two types of dried fruits: prepared with a syrup and simply dried in the sun.

“There was nothing left for us, everything was sold. It’s a hard but highly profitable job. I sold dried peaches, apricots and apples without syrup for AMD3,000 (approximately US$6) per kilo. This type of dried fruits is in high demand. I should prepare more of them this summer. As for the dried apricots, peaches, plums, pears, apples and mulberry with syrup, I sold them for AMD5,000 (about US$10) per kilo,” says Hasmik. 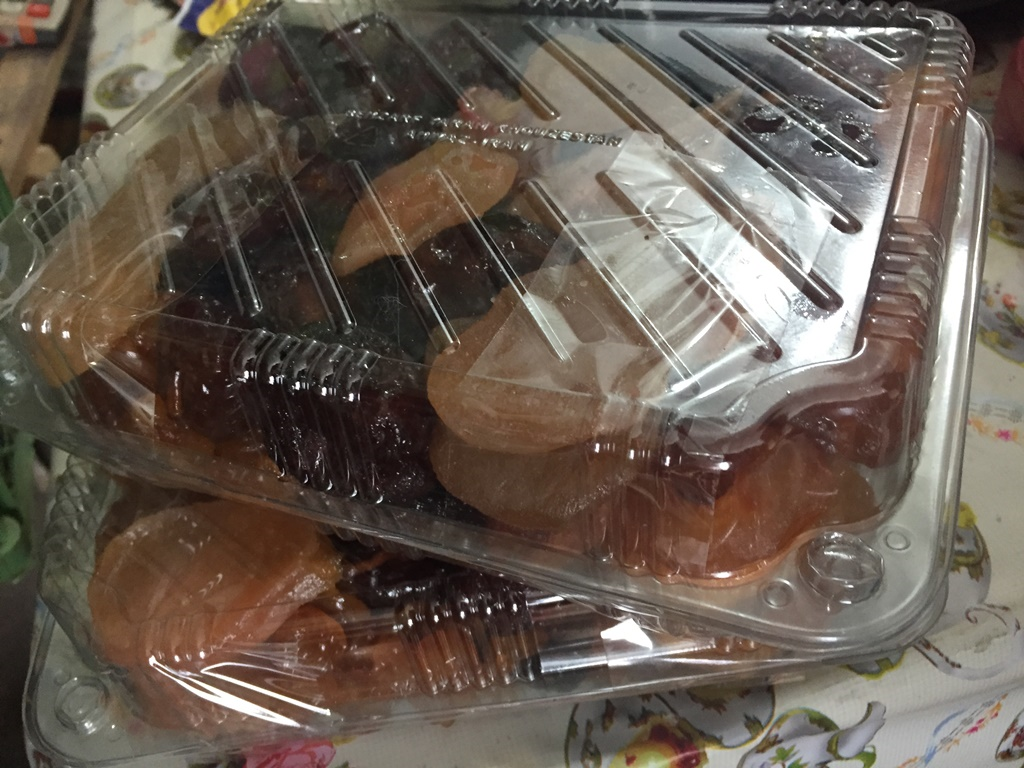 She sold as much as 40kg of dried fruits with syrup and 20kg without syrup ahead of the New Year. She also offers her clients home-made basturma and meat sujuk that are the must-have dishes on the New Year table in Armenia.

“I offered basturma for AMD9,000 (US$18) per killo, and sujuk – for AMD7,000 (US$14). I didn’t sell much. I’ve cooked them for the first time this year, but I am sure, there will be more orders next year. People already know that I’m cooking them,” says Hasmik, treating us with a ‘treasure’ that she has made with her own hands.

Unemployment, social and economic problems urge the women to use some of their skills and talents at least to somehow ease the burden of the family budget. Despite the fatigue and sometimes painful manual work, they readily get down to business and oftentimes succeed.

“The New Year is a happy period for me. People already know about me, the number of families in my clients’ list increases by five each year. It would be nice if there were such orders throughout the year, but people don’t have much money and they treat themselves to such a lux only on the New Year,” says Hasmik. She admits that through this business she helps her husband a lot, at least in covering the New Year expenses.