Georgia’s biggest opposition-minded channel has changed owner and management, and the channel will be run by a new director general – Paata Salia, the lawyer of the channel’s new owner Kibar Khalvashi.

Khalvashi has already met with employees of the channel in the company’s offices.

How did this happen and what does this change mean for the country?

The nearly four-year-long dispute over Rustavi 2 ended yesterday on July 18 with a loss for the recent owners and management of the TV company.

The TV company now has a new owner – Kibar Khalvashi, a businessman who is close to the government.

• Who owns the media in Georgia?

•Georgia political crisis – the oligarch besieged from all sides

This turn of events took place after the European Court of Human Rights ruled yesterday at noon on the Rustavi 2 case, saying that none of the courts that tried the Rustavi 2 case in Georgia – including the Tbilisi City Court, Court of Appeals and the Supreme Court – had violated the channel’s right to a fair trial or other related rights.

The ECHR also dismissed a temporary suspension of the enforcement of the Georgian Supreme Court’s ruling from March 2017, which declared Khalvashi the owner of the company, effectively transferring ownership rights to him.

After the ECHR decision was announced, there were a number of lightning paced further developments.

One hour after the ECHR verdict was made public, the new owner Kibar Khalvashi issued a statement saying that the Strasbourg court had restored justice.

The only person who Khalvashi has dismissed so far is Director General of the channel Nika Gvaramia. Instead, the businessman appointed his lawyer Paata Salia in the position – this change is already reflected in the public registry.

Khalvashi said in his statement that he is ready to cooperate with Rustavi 2 founders – Davit Dvali and Jarji Akimidze – who also allege that the TV station was unrightfully taken from them during Saakashvili’s presidency.

After changes made at 4 o’clock in the afternoon on July 18, the public registry read that Kibar Khalvashi owns 60% of TV company Rustavi 2 and 40% is owned by Panorama Ltd, whose sole owner is Kibar Khalvashi. 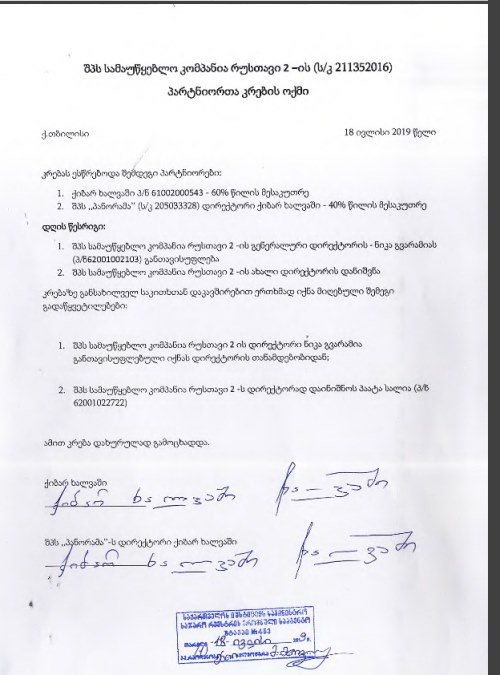 Kibar Khalvashi was the owner of Rustavi 2 TV company in 2004-2005. Then he was a close associate with ex-President Saakashvili and Irakli Okruashvili, the then Minister of Defense. It is quite unclear when he bought the television channels, as the founders of the TV company Davit Dvali and Jarji Akimidze claim that Saakashvili took the TV channel away from them with the use of blackmail in favor of Khalvashi.

Today in Rustavi 2, there are still people who remember Khalvashi’s two-year reign. They say that the businessman personally and negatively interfered with journalists’ activities and forced them not to publish negative information against the government.` 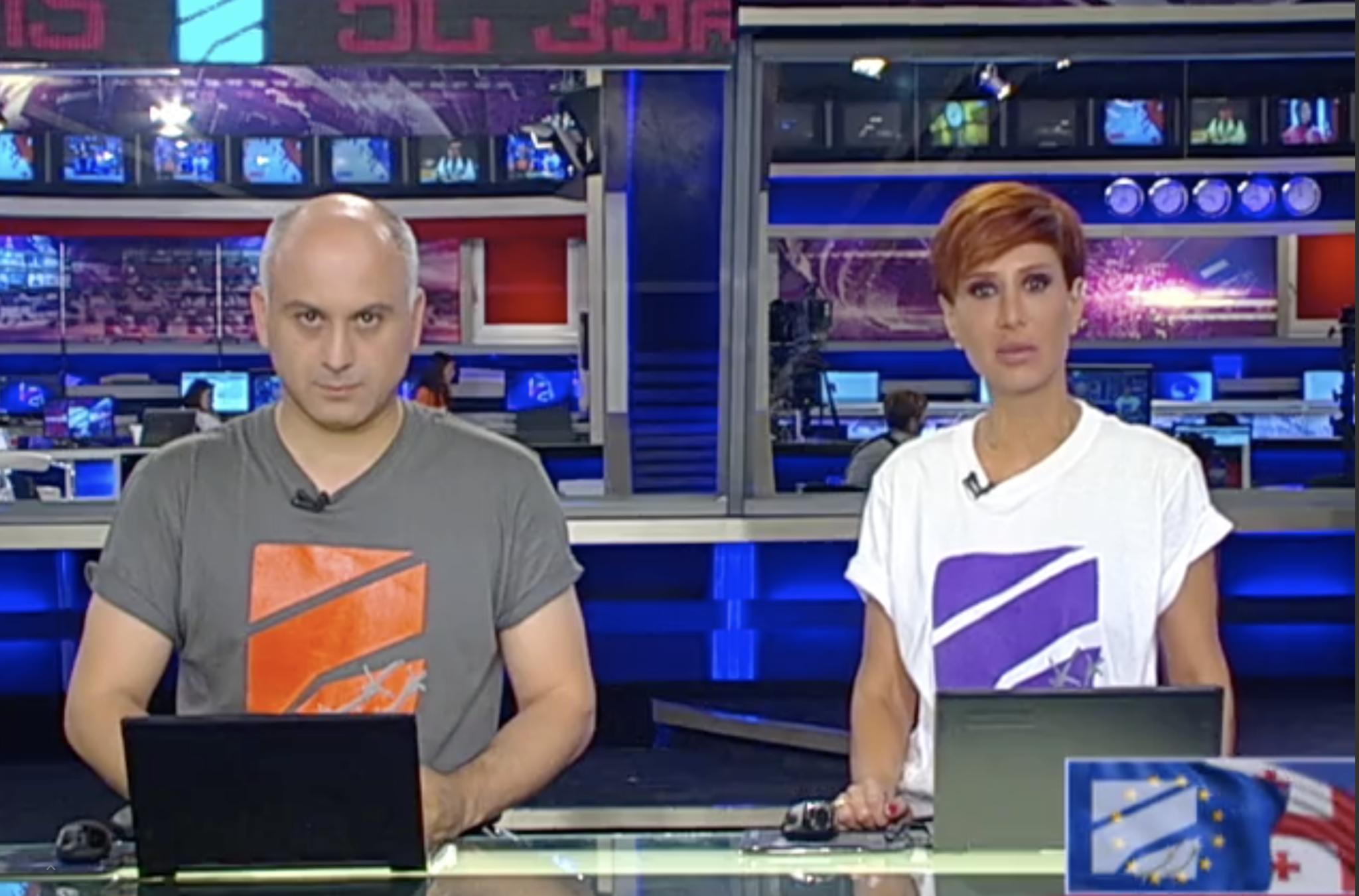 Yesterday evening at 20:00, viewers of Rustavi 2 saw live footage of how the new Director General Paata Salia came to the TV station.

He entered Nika Gvaramia’s reception room and requested a meeting with the channel management. Gvaramia said he was not going to cooperate with him.

“I have also asked the secretary not to make you coffee. Now meet with whomever you want to, but I cannot let you in my office, it is still my personal space”, Gvaramia said.

Salia also met with the journalists gathered in the newsroom, who demanded guarantees of independence of the channel’s editorial policy.

He was also asked to keep all the journalists and presenters on the channel who criticize the government.

Journalists said Salia refused to give such promises, however. they did not receive similar guarantees from Salia

Paata Salia spent little time on Rustavi 2’s premises, and said he would return on July 19.

Rustavi 2 journalists and other members of the board said that the ECHR ruling was “unexpected.”

They say that given the channel’s transfer to Kibar Khalvashi, a change in the editorial policy of the channel is inevitable.

“He ate the last bite”

Hundreds of people gathered in the courtyard of Rustavi 2 on July 18 in the afternoon to wait for the verdict. Outside, there was a huge monitor installed so that the crowd could watch the 12-hour news release.

Journalists wore special shirts with the Rustavi 2 logo. The TV company’s yard was decorated with flags of Georgia and the European Union. The flags of the EU and Georgia were depicted throughout the day as well.

From the morning on the channel hosted representatives of NGOs, politicians, other well-known people and well-known citizens of the society who say that it is important to preserve the critical editorial policy of Rustavi 2 when the country is ruled by an informal leader, Bidzina Ivanishvili – the head of the ruling Georgian Dream party.

Few had doubts that the ECHR would come out with a decision not in favor of the channel. Some employees even came to work with their children, so that they could celebrate the end of the long court trial.

The mood soon broke after Minister of Justice Tea Tsulukiani appeared on the monitor, and said at a special briefing that the dispute between Rustavi 2 and the state was decided by the Strasbourg Court in favor of the state.

“You can not understand what’s happening in the country. He [Bidzina Ivanishvili] has already eaten the last bite and will bring us all together to Russia. I do not want to live in that country”, said one journalist in the yard of Rustavi 2, barely holding back tears.

Despite the fact that Internet access in Georgia is widespread, for many families it is still a luxury, because more than 20 percent of the population lives below the poverty line.

Consequently, political observers agree that a change in the editorial policy of Rustavi 2 will have a significant impact on the 2020 parliamentary elections.

Despite the contrary, there is no doubt that the new owner and management of the channel will try to change the editorial policy of the channel.

Khalvashi is a businessman close to the Georgian Dream government, of which Rustavi 2 has been critical since it came to power. The channel has closely followed the policy and messages of the former ruling party run by ex president Mikheil Saakashvili, the United National Movement.

Former owners of the channel, brothers Karamanishvili and Nikoloz Napia, are businessmen and members of Saakashvili’s team. Nobody doubted that behind these two surnames was Mikheil Saakashvili himself, who largely determined the policy of the channel during his time abroad and who appeared often on the channel for interviews.

During the Georgian Dream’s rule, Rustavi 2 has been critical of the government on its political talk shows about corruption, nepotism, the problems in the judiciary, the various activities of the country’s informal manager Bidzina Ivanishvili.

In his interviews Bidzina Ivanishvili constantly speaks of Rustavi 2 as a “lieutenant” and the “UNM party television”. Journalists have calculated that in one of his last interviews that he gave to TV journalists a few days before the presidential election in October last year, Ivanishvili brought up Rustavi 2 over 40 times.

In the same interview Ivanishvili said that:

“If we were to turn off Rustavi 2 today, you would find nothing more than rebuilding and reconstructing the country.”

Ivanishvili then said that Rustavi 2 has taken the public hostage and deceives the people, but that soon this would cease to be the case:

“Rustavi 2 will not have the opportunity to do this anymore, I promise you”, Ivanishvili said, which were perceived at the time as a threat to the TV station.

“The pluralistic media environment is collapsing”

Fifteen Georgian NGOs say that after the decision of the Strasbourg Court, a new reality has been created in the country that “is a big challenge for Georgia’s fragile democracy and poses serious threat to the pluralistic media environment”.

The NGOs said that today it is important to maintain the editorial independence of journalists and protect their labor rights.

The signatory organizations emphasize the government’s interest in this process:

“There is no doubt that the change of owners of Rustavi 2 was in the interest of the government, and they have openly stated this. It is important not to continue the vicious practice in Georgian media space when the change of owner / manager directly reflects the critical editorial policy of the broadcaster’s authority.”

Media experts think that the developments around Rustavi 2 will hurt the media environment and democratic development in Georgia.

“Today we are forcibly going through the process of the collapse of pluralistic media environment, which can very quickly accelerate, we have only one media outlet in the country where we will hear one and the same content and contextual views,” said the media expert Koridze.

Koridze says that the West and western structures play a key role in  Georgia, which may yet influence the government’s decisions.