He didn’t explain, however, what ‘a den in the finest sense of this word’ was, having been dragged away by someone and his voice sank in the music of the ‘80s.

There is a pickup truck with equipment and the drifts of foam plastic, imitating snow, outside the ‘La Chateau’ bar. One of the episodes of the film under the working title-‘The Dreamer’ is being shot here today. It’s the second full-length film by a young filmmaker, Rufat Hasanov. Meanwhile, the bar is operating in its usual mode, the visitors blend with the actors and crew. Well, a glass of tequila ‘for inspiration’ is a holy cause, especially when it’s 10p.m., the shooting has just begun, the winter is outside and it’s so cold inside because of the constantly opening doors, that everyone is wearing outerwear, and even the cameraman doesn’t take his gloves off.

‘The Dreamer’ is a comedy melodrama about a platonic love under the absurd circumstances. It seems to be the only film produced in 2017 on the state order. The budget allocated this year by the Culture and Tourism Ministry will be hardly enough to cover one more project. Meanwhile, Azerbaijani cinema is at the important stage, it has eventually ‘got off the ground’ and is now deciding where to go further.

And is there actually any cinema?

A contemporary Azerbaijani cinematography is a strange phenomenon. It seems to be there, but at the same time it seem no to exist. That is, the films are likely to appear, but the audience may not see them.

Thus, the audience can be divided into 3 categories.

First – those, for whom Azerbaijani cinematography ended somewhere in the early ‘90s, and they are absolutely unaware what films are produced in the country. On the side note, most of the people belong to this category.

Second category – the most skeptical and critical viewers, who don’t expect anything positive from the local cinema and who find it hard to pick up some literary words to describe another ‘just out’.

And, finally, the third category– the most peace-loving ones, who are loyal to the ‘local produce’ and who are happy that the ‘process is underway’. On a side note, after release of each film, the second and third ones regularly ‘lock horns’ on social media.

Before we peacefully delve into consideration of the full-length films, let’s briefly review other genres.

Short films, both features and documentaries, are produced in Azerbaijan with commendable intensity. And that’s not because the filmmakers like to be laconic, but rather because they more often than not don’t have enough funds for a full-length movie. Many of them are even awarded prizes at the international film festivals.

The film was screened at several prestigious film festivals.

And after a film’s ‘long walk from one festival to another’, the turn finally comes to the local audience and some mini-screenings are organized for this purpose.

TV series have been also actively filmed in the recent years under the motto: ‘Let’s support the local producer, let’s say ‘no’ to imported soap operas!’ Although, they are regularly shown on TV, they couldn’t hold that very place in the local housewives’ hearts that was once held by ‘Santa-Barbara’ and ‘Tropicaliente’. But that’s, actually, a subject matter for a separate article.

How many of those films has an average Azeri watched? Only the ‘Bridegroom’s relatives’ and ‘Xoxan’ have been screed in the cinema houses along with some other similar ‘cheesy’ comedies. The ‘Curtain’ has been not only screed in the cinema houses, but widely spread on social media, whereas the rest of the films have been watched by people, who themselves are engaged in cinema industry, including experts and journalists.

Nevertheless, almost all experts highly assessed the viewers’ interest. And the statistics shows that the viewers’ interest in domestic films is now higher than it has ever been throughout the existence of independent Azerbaijani cinematography. Though, it’s true that this applies only to comedies. And there are quite a few of those, willing to watch dramas and other not so funny movies.

“As far as serious films are concerned, it’s all the matter of lack of funding. To make a viewer watch this or that film, he/she should be at least informed about its existence. And that requires promotion. A lot of promotion. Unlike the commercial cinema, that can afford it to a certain extent, the non-commercial cinema can no longer do it.”

Consequently, most of the viewers will be simply unaware of release of a new drama. Such films aren’t screened either in movie theatres or on TV. They may be demonstrated only as part of some ‘national cinematography days’. By the way, such days have been recently organized in Nizami movie theatre. And do you know, what time those films are screened? At 10:30a.m. It’s hard to imagine a person going to the cinema at 10:30 in the morning, isn’t it? Even animated films are screened later in that very movie theatre.

“Our major problems are the lack of good equipment, no legal basis for participation in the international organizations’ programs, alienation from the global cinema processes and the shortage of skilled professionals. And, finally, there are very few cinema houses in the country, and that seriously affects profitability of film production.”

“Sponsors and investors, who are quite a few, are far from being philanthropists. They invest money only if there is a hope that the film will pay off. Whereas, if you are shooting non-commercial films and want to do art, there is nowhere you can get help. We need a state-run cinematography development fund, as well as the programs to support young cinematographers. In the meantime, the Ministry of Culture remains the only source of funding. And that’s just 2-3 projects per year. On a side note, all projects are implemented only on the basis of ‘Azerbaijanfilm’ studio, which many simply refuse to cooperate with due to its unprofessional and outdated approach to the process. As a result, some poor-quality films are produced that the audience refuses to accept.”

How to earn anyway?

Young filmmakers, seeking to produce noncommercial films, act based on the following scheme: they write a script, make a teaser, then find sponsors somewhere abroad. Then, if lucky, the film is taken to a prestigious film festival, where it could be traded away to TV somewhere in Europe.

Of course, in this case the Azerbaijani audience won’t watch it. That’s exactly how markedly ‘homemade’, low-budget films are produced. They are full to the brim with national color, with that ‘Asian’ exotics that can be easily exported.

However, it’s mostly the case with short films. 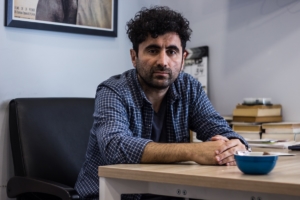 “The Ministry of Culture and Tourism annually allocates certain amount for film production. Independent film studios and filmmakers submit their projects and if they are regarded as interesting, they are financed. This system worked quite effectively some few years ago. However, everything has gone haywire after Mushfig Hatamov was appointed the ‘Azerbaijanfilm’ director in 2012. Now all projects are filmed on the state film studio basis, whereas Hatamov himself for some reason acts as a producer, though all his ‘producing’ boils down to austerity and inept economizing, cutting down timeframes etc. As a result, the quality of films is affected.”

“I’m not going to comment on the accusations against me. Cinematography likes facts. And here is one of them: over the past few years, Azerbaijani films took part in nearly 100 festivals in 52 countries around the world and received a huge number of awards. And also, about 300 young professionals, including film directors, scriptwriters and cameramen, were given an opportunity to show their worth through cooperation with Azerbaijanfilm.”

A new law, drafted on the Culture and Tourism Ministry’s order, has been already submitted for consideration to Milli Majlis (Parliament). If adopted, the duties on import of cinema equipment from abroad could be possibly reduced and an official quota for cinemas and TV channels on screening Azerbaijani films could be set.

Mushfig Hatamov is particularly optimistic about the upcoming changes. Whereas Asif Rustamov, on the contrary, has no positive expectations:
“The bill was drafted exclusively by the government officials, in a rush and with no due account for real problems and needs. Whereas plenty of various bans and restrictions in this law in no way make for the development, but rather create grounds for introduction of censorship and persecution of the independent film studios.”

We all remember the names of the filmmakers of the older generation – Eldar Quliyev, Rasim Ojagov etc.. Whereas the young filmmakers are known only to the people of ‘their own circle.’

They are 28-38 years old. Many of them were educated abroad, and some of them, before they ‘escaped to the filmmaking’, had managed to gain, for example, a degree in economy. Given that cinematography in Azerbaijan is absolutely unprofitable and even losing business, people choose this sphere exclusively out of love to art. Or, at least, out of vanity. So, nearly all Azerbaijani filmmakers (especially those who produce auteur films) are the romanticists. 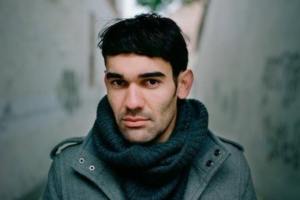 Two weeks have passed after the shootings in ‘La Chateau’ bar. The foam plastic drifts have ‘melted’, the movie has been filmed and is due to be released in December. And it seems that Rufat Hasanov is going to do his best to ensure that everyone watch his film. After all, he sacrificed his principles for good reason, didn’t he?!

“I used to have a rather snobbish approach to cinematography – I wanted to make films for cinéphiles. But this film has turned out to be quite different. It is designed for that very notorious broader public- it has an easily-grasped humor, and the story itself is more than digestible. Generally speaking, it’s a normal mass movie. And people will come to watch it. And only afterwards the audience could be cultivated love to a more profound cinema. I’m almost sure about it.”